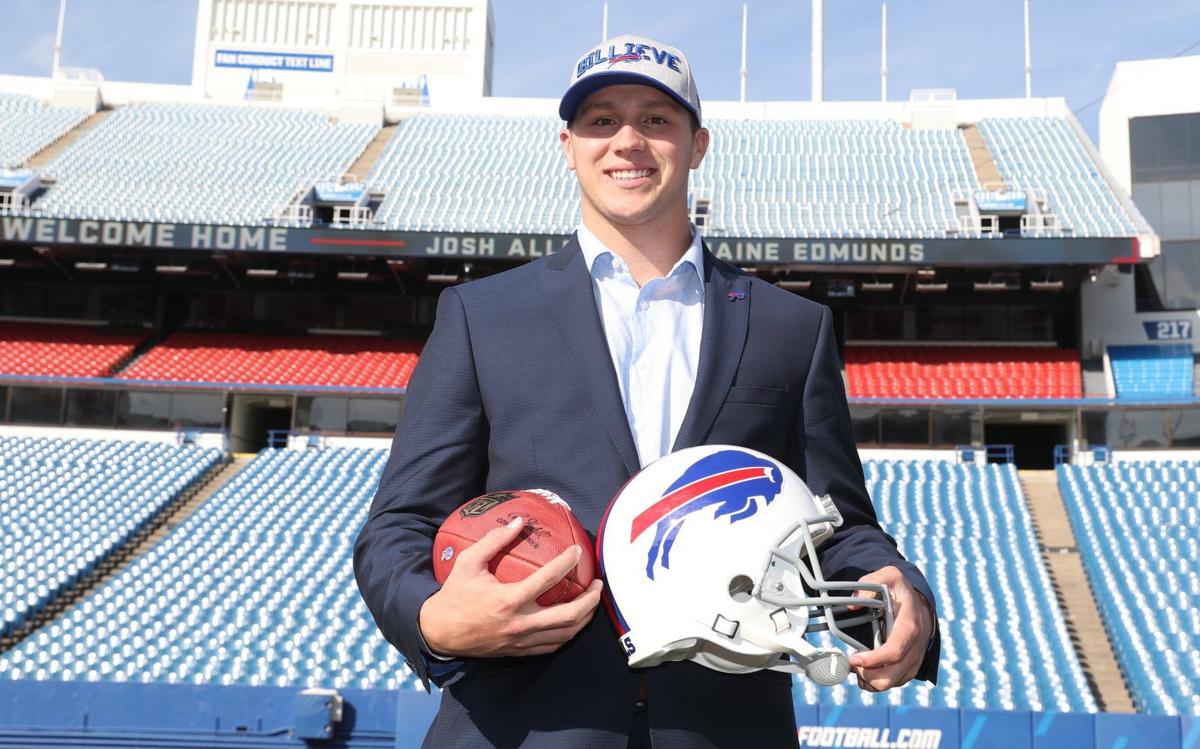 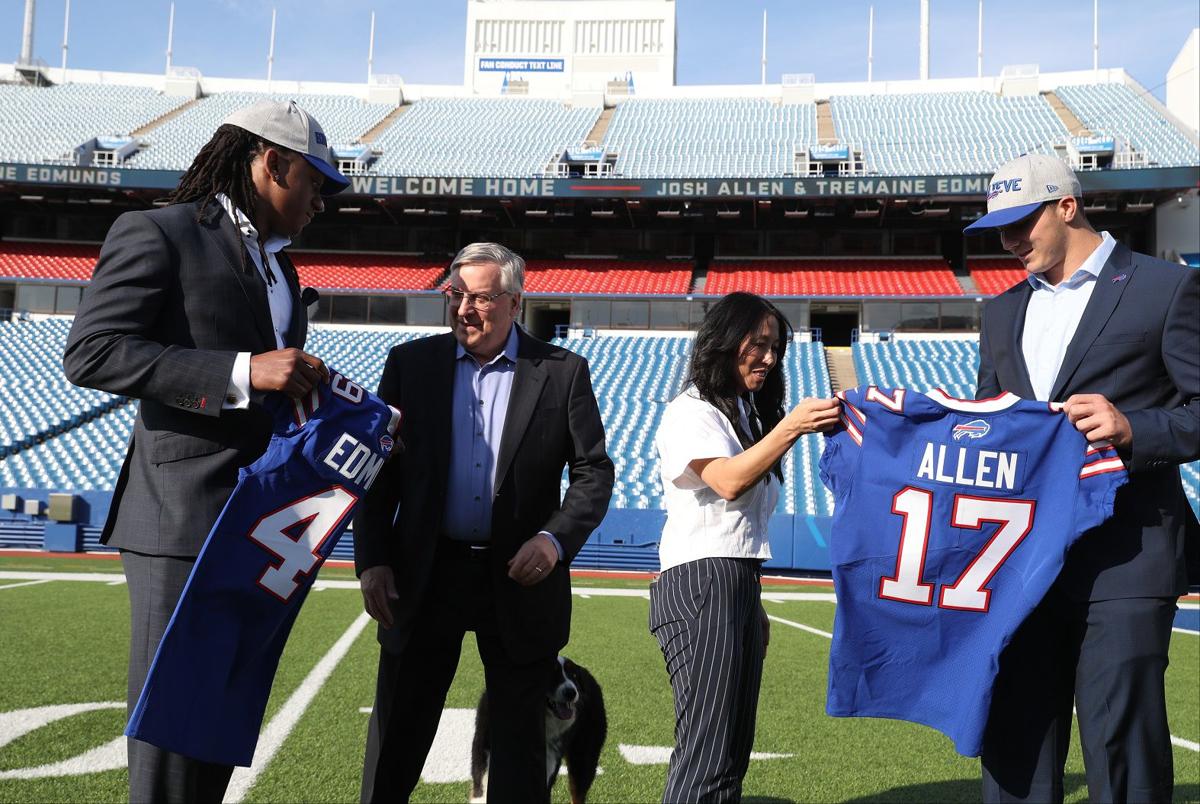 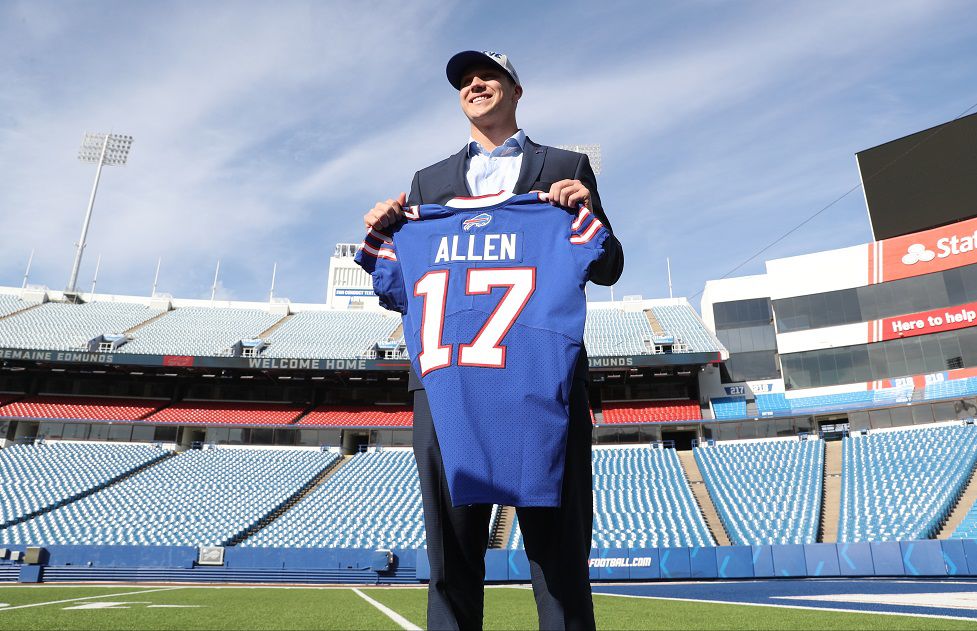 Josh Allen posed for the first time with his No. 17 jersey as Friday's sun dipped below New Era Field's upper deck.

Allen beamed with every click. He glanced around his new football playpen. Dad wondered where the family's seats would be.

He'd been asked how social-media immaturity kneecapped what was supposed to be the best day of his football life so far.

"It almost broke me," Allen said, still anguished 21 hours after the Bills drafted the University of Wyoming quarterback seventh overall.

Six-year-old tweets with racial slurs turned up the night before the draft. Nobody believes that was coincidental. The timing inflicted maximum damage on Allen's draft day.

Bills fans argued over their favorite team drafting a premier player who had tweeted the N-word as an adolescent. That UCLA quarterback Josh Rosen also was available when the Bills selected Allen added to the debate.

Those close to Allen suspect, with boffo dollars at stake, an unscrupulous rival agent maybe wanted another quarterback to get drafted earlier than Allen, or perhaps a team hoped the controversy would cause Allen to slide into its grasp.

"Obviously, some people are here just to watch the world burn," Allen said. "They want to tear you down.

"There's going to be haters on social media, and they got free time to hurt somebody's life. I think that's what it was."

Sabotage or not, Allen admitted he tweeted the N-word at least three times when he was 15 and 16 years old. Allen was 17 when he posted another tweet that quoted a racially charged joke from the ABC sitcom "Modern Family."

Allen spent much of Thursday explaining teenage missteps to general managers, apologizing to anyone who would listen and crying about a bruised reputation he carefully built up as an underdog who left high school with zero college scholarship offers to become a blue-chip quarterback prospect.

Allen also fielded calls and texts from former Wyoming and Reedley College teammates who had his back.

Ralph Watts, a black offensive lineman from Reedley, was among them.

"He's definitely not racist," Watts said. "He's far from it. He's a stand-up guy. We all make mistakes. We all quote lyrics from songs and things like that, and that's all it was."

Watts had been ejected from his dorm for, he said, having a woman in his room against school rules. The sophomore had nowhere to stay until Reedley's freshman quarterback offered his off-campus apartment.

"Without any hesitation, he said 'You could crash here,' " said Watts, who attended NAIA Rocky Mountain College and recently signed with the Maine Mammoths of the National Arena League. "He had an air mattress, and that was enough for me. He didn't have to do that.

"Josh gave me rides to school, let me stay with him, even cooked me meals. I didn't get any hint of him being racist at all. He's caring, a great leader."

The Bills' front office gave its blessing by trading up to draft Allen. Beane sent the 12th, 53rd and 55th overall draft choices to the Tampa Bay Buccaneers for the seventh and 255th overall picks.

Buffalo's locker room, however, still will have questions about Allen's actions. Allen will report back May 10 for Bills rookie camp. He's scheduled to work out with the entire roster for the first time May 22.

"He's owning it, and that's what you want to see," Bills linebacker and captain Lorenzo Alexander said. "He's willing to put himself out there.

"The biggest thing now is earning the respect of his teammates with how he works and, when guys ask, being open and honest about it."

Alexander said that racial rifts must be addressed in a locker room, especially if teammates find themselves distrustful of an expected leader.

The NFL in 2013 suspended Incognito half a season, and teams treated him like plutonium for another season because of his role in the Miami Dolphins' bullying scandal.

An NFL investigation found Incognito had sent dozens of racial and homophobic texts to black teammate Jonathan Martin and made comments – Incognito claimed they were jokes – about sexually assaulting Martin's sister.

Incognito was 30 years old when the Dolphins cut him for his misbehavior.

"With some of the things he went through in Miami," Alexander said of Incognito, "I came in watching him a little bit closer. But over time he earned my respect, and I was willing to go to battle with him and really hang out with him and invite him into my home.

Also helping Incognito overcome his checkered past was the way he performed. Buffalo signed him in 2015, and he went to three straight Pro Bowls.

Incognito, of course, was a grunt. Allen is expected to be the face of the franchise even though he hasn't taken an NFL snap.

Quarterback is the most vital position in sports and oftentimes establishes a team's identity. A locker room might be able to handle a jerk linebacker or offensive lineman, but a team would be doomed if unable to have faith in its quarterback.

"I would be foolish not to extend grace in getting to know this young man coming into our locker room," Alexander said. "I know Sean and Brandon wouldn't bring somebody in here that would have an ill spirit about them."

Alexander noted Bills defensive end Eddie Yarbrough, a teammate of Allen's at Wyoming, has vouched for the quarterback's character.

Wyoming offensive coordinator and quarterbacks coach Brent Vigen predicted Bills fans eventually would consider any Twitter embarrassment to be "a blip on the radar" after Allen assembles a body of NFL work.

"Once everyone gets past this and sees Josh for who he is," Watts said, "everyone in Buffalo will fall in love with him. He's a great guy, and I can't say that about many people, but I can say it about him.

"I would go to war for him. Without any doubt."

Back in the San Joaquin Valley, where Allen grew up the son of a third-generation farmer, his teenage mistakes became a lesson Thursday and Friday for Sierra Pacific High civics students.

"I tell our students here, 'Listen, you guys are going to say stupid stuff and do stupid stuff. The problem is you guys let everybody know about it, and it doesn't go away.' If social media was around when we were in high school, we'd be screwed."

"All his best friends are all Mexican kids," Rodriguez said. "So I didn't put a lot of stock in what he said.

"He was a young, foolish kid. It's all just stupid. This is supposed to be the happiest day of this kid's life. He shouldn't have to scramble over something he said years ago, and it's sad."

Allen was contemplative while walking back from his New Era Field photo shoot to the Bills' training facility. He was on edge, too.

He clearly remained upset at whoever thought it was necessary to dredge a 15-year-old's Twitter feed, but he seemed just as angry with himself.

"I've moved on," Allen said, "but now it's trying to get my teammates to respect me, to understand the type of person I am.

"And that's going to be the hardest part just because of, now, the preconceived notions from somebody going back six years and bringing up stuff that has no relevancy."

Two fans decked in Bills gear waited in the New Era Field parking lot in hopes of saying hello while Allen drew near in Friday's twilight.

Allen headed squarely toward them without deviating from the discussion at hand. He showed zero indication he would avoid the unpleasantness of what he did five or six years ago, of what erupted on his long-awaited draft day until it was behind him and the Bills.

"Yesterday," Allen said, "it seemed like it was never going to end. I felt like it would linger forever.

"But things are turning. As people get to know me they'll help me through this process."