NFL defenses did a better job of preventing the Buffalo Bills from passing deep in 2021.

The production by the Bills’ running backs was more inconsistent in 2021 than it was in 2020.

The Bills’ offensive line personnel shuffled more in 2021 and endured more difficult games than in 2020.

The Bills’ quarterback isn’t in the discussion for NFL most valuable player, as he was last year. He didn’t eclipse his team-record totals from 2020 in passing yards and passing touchdowns.

However, Allen arguably carried an even heavier load of the Bills’ offense in 2021 and produced one of the best quarterbacking seasons in Bills history.

“There's not another quarterback I'd rather have than him,” said Bills offensive coordinator Brian Daboll. “He just has such a strong, competitive nature built into him from his upbringing and what he stands for.”

“Four years together, I think that he's grown a lot, along with me. We have a great relationship and great trust on and off the field and I certainly have all the trust in the world in him when he's playing the game.”

He is one of only four players in NFL history to record 4,000-plus passing yards and 40 or more total touchdowns in consecutive seasons, joining Drew Brees (2011-13), Aaron Rodgers (2011-12) and Brady (2020-21). Allen hit those marks in 16 games this year. He also joined Brady, Brees, Rodgers, Patrick Mahomes and Peyton Manning as the only QBs with 4,000 yards and 35 passing TDs in back-to-back seasons.

The dual-threat nature of Allen’s game continues to set him apart from almost everyone. He became the first NFL QB ever to have 4,000 passing yards and 750 rushing yards in a single season. Over his first four seasons, Allen has 134 touchdowns passing and rushing, second only to Dan Marino (144) in NFL history. Allen is the first QB ever to have four consecutive seasons of six-plus rushing TDs.

Despite all that production, the 2020 season was a hard act to follow. The Bills went 13-3 and ranked third in the NFL in passing.

It started right from the first game, with the Pittsburgh Steelers focusing on a four-man rush and protecting deep. The Steelers blitzed Allen once in 60 dropbacks. In Week 6, Tennessee blitzed Allen once in 57 dropbacks. The Bills’ offensive line had a terrible game against the Steelers. It played better vs. the Titans, and Allen attacked the Tennessee defense better. He passed for 353 yards and ran for 26. The Bills lost, 34-31, when Allen was stopped short of the end zone on a quarterback sneak in the final seconds.

“I know we didn't win the Tennessee game,” Allen said. “But I think I learned a lot from that game. I think seeing how teams were playing us before that game during the season, and just kind of learning obviously of getting the backs involved, getting the tight ends involved, finding the check downs a little quicker. Again, I’m still learning, still progressing in that aspect. And I've got a long way to go. But I think if there's one game where I learned I think the most this year was that game.”

Overall, Allen was blitzed a career-low 21% of his dropbacks, down from 32.5% last year, according to Buffalo News charting.

“I don’t know if the word underrated is the one I should use, but he’s a very smart player,” Daboll said. “Not only is he smart, he’s instinctive, too. I can’t speak for defenses on how they want to attack our offense or attack him. But when you bring an extra guy, unless they want to drop somebody else out there’s one less guy in coverage. And then you’ve got to decide are we going to bring five guys and play zone behind it or are we going to rush five and play man behind it? If you do that, there’s other things we have and Josh has ability-wise to attack that. It all starts with the protection aspect of it. Sometimes they can bring five and fool you and get you on a protection.”

Inconsistency in the ground game prompted the Bills to ask more of Allen as a runner.

“You try to be creative,” Daboll said after the Tampa game, “and find ways to either tire a line out or get the ball on the perimeter, use RPOS, or quarterback run game or quick drop back or perimeter screens. So we were going to be aggressive. That was the mindset going into it. ... I think Josh made good decisions in terms of the running game, when to throw it and when to hand it off.”

With Allen as a big part of the rushing equation, the Bills enter the postseason encouraged about the state of their run game over the last month of the season. Devin Singletary averaged just five carries a game during a six-game midseason stretch. Over the past seven games, he has carried 15 times a game. The Bills also are encouraged about the way the offense has attacked defenses that have focused more on coverage than on blitzing.

“With what our offensive line has done the last couple weeks, it’s been awesome to see that and to see them grow, and the communication there continue to evolve, and see how well some of these guys are playing,” Allen said. “So that’s been very promising. Obviously, you’ve been able to see Motor kind of step into a bigger role for our offense, and he’s been excelling. Guys on the outside are getting open and catching balls and making plays. That’s really all you can ask for.”

The Bills have asked more of Allen than ever this season. That’s not going to change in the playoffs.

Gaughan's insight is featured in the "PlayAction" video series, providing analysis to get Bills fans ready for the next game. He is past president of the Pro Football Writers of America and served as a Pro Football Hall of Fame selector for 12 years.

'We took our lumps': How the Bills' tough stretch prepared them for this moment

The journey to the postseason – which begins Saturday when the New England Patriots visit Highmark Stadium for an AFC wild-card playoff game – has been full of adversity. Some of that is the same type as every NFL team goes through, and some of it has been self-inflicted and unique to the Bills.

Mark Gaughan: Bills-Pats, Round 3 is going to be so sweet – or so bitter

If the Bills beat the Patriots, it pretty much makes the entire season. Two victories over Belichick in the same year – and sending the Pats packing in the playoffs? That would be a great way to remember the 2021 campaign.

With rough weather on deck, the Bills will need a clean day on special teams against the Patriots in Orchard Park.

The Editorial Board: While players work for ultimate prize, Bills fans should savor the playoff journey

Amid headlines about rising Covid cases, threats to American democracy and Buffalo’s fight over a grain elevator, along come the Bills to ligh…

Of the players on the active roster, no one was listed with an injury designation on Thursday's practice report.

How we see it: News' writers predict Bills-Patriots III in wild-card playoff game

"Make no mistake: All the pressure is on the Bills in this one," writes Jay Skurski. "The Patriots are 1-3 in their last four games, while the Bills are riding a four-game winning streak. We'll see how much momentum means."

The New England Patriots had 60 pass plays of 20 or more yards during the regular season, 10th best in the NFL. The Bills had 51 plays of 20-plus yards, 16th most.

Tips and tricks for playing in frigid conditions are offered by former players on social media and sports talk shows every time a subzero, marquee game is on tap, and this week is no different with the Bills preparing to host the New England Patriots on Saturday in what could be the second-coldest football game in franchise history.

Wild-card weekend: Your guide to the Buffalo Bills' showdown with the Patriots

The Buffalo Bills are back in the playoffs and back in prime time.

In every win and loss, there was good and bad and a lesson to be learned.

“I feel like that Tampa Bay game kind of got us back to where we needed to go, as far as having confidence, playing free, and playing like we know what we can play,” wide receiver Stefon Diggs said in late December.

'We know each other extremely well': Bills prepare for third meeting of season with Patriots

“They beat us at home, we beat them at [their] home. It's a playoff game, Buffalo, New York, on Saturday night,” Bills safety Jordan Poyer said. “I mean, it's just really everything you asked for in a football game, football season, this type of game right here.”

Buffalo held only a walk-through practice Tuesday and listed nobody as injured.

This week's playoff game may turn out to be one of the coldest games the Bills have ever played. Temperatures are expected to be in the single digits at the 8:15 p.m. kickoff Saturday at Highmark Stadium.

The Bills finished the year allowing a league-low 17 points per game. It’s the first time in the Bills’ NFL history (since 1970) that Buffalo has led the league in scoring defense. 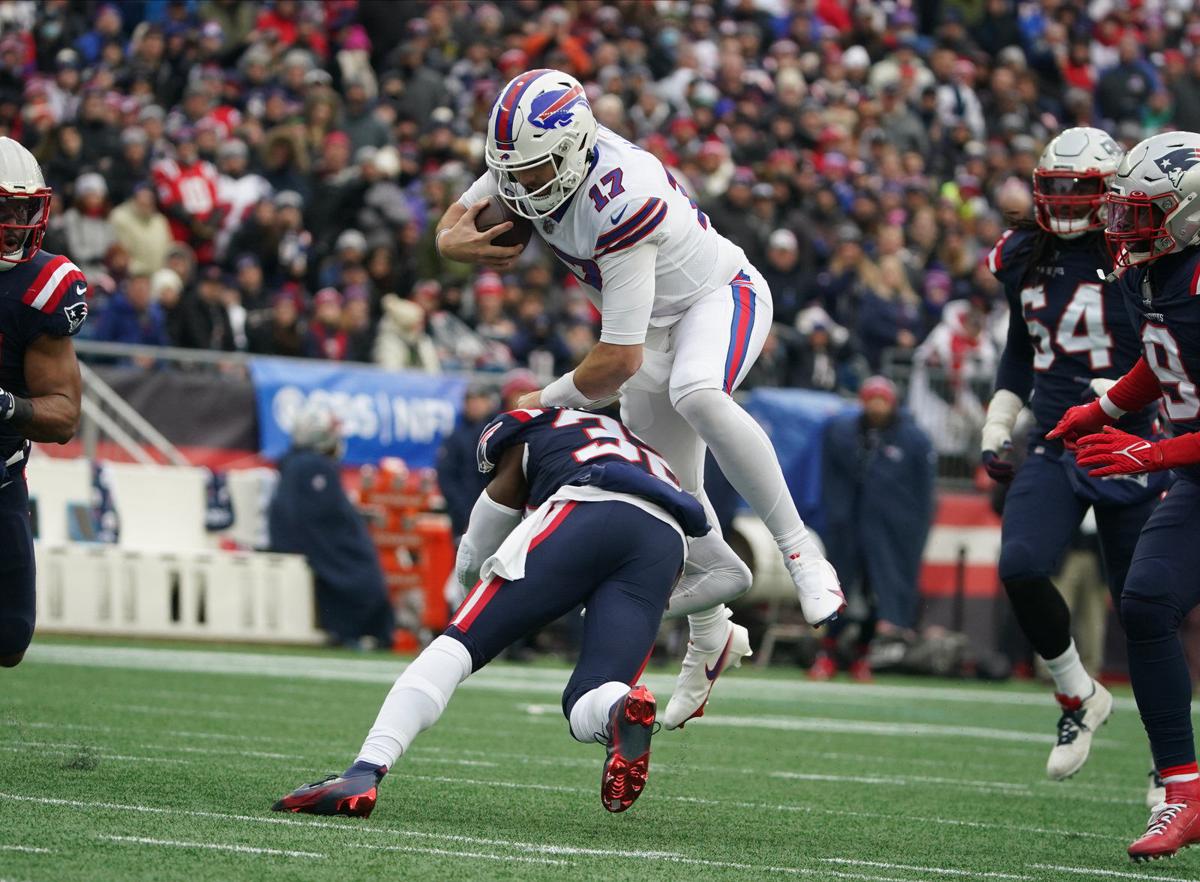 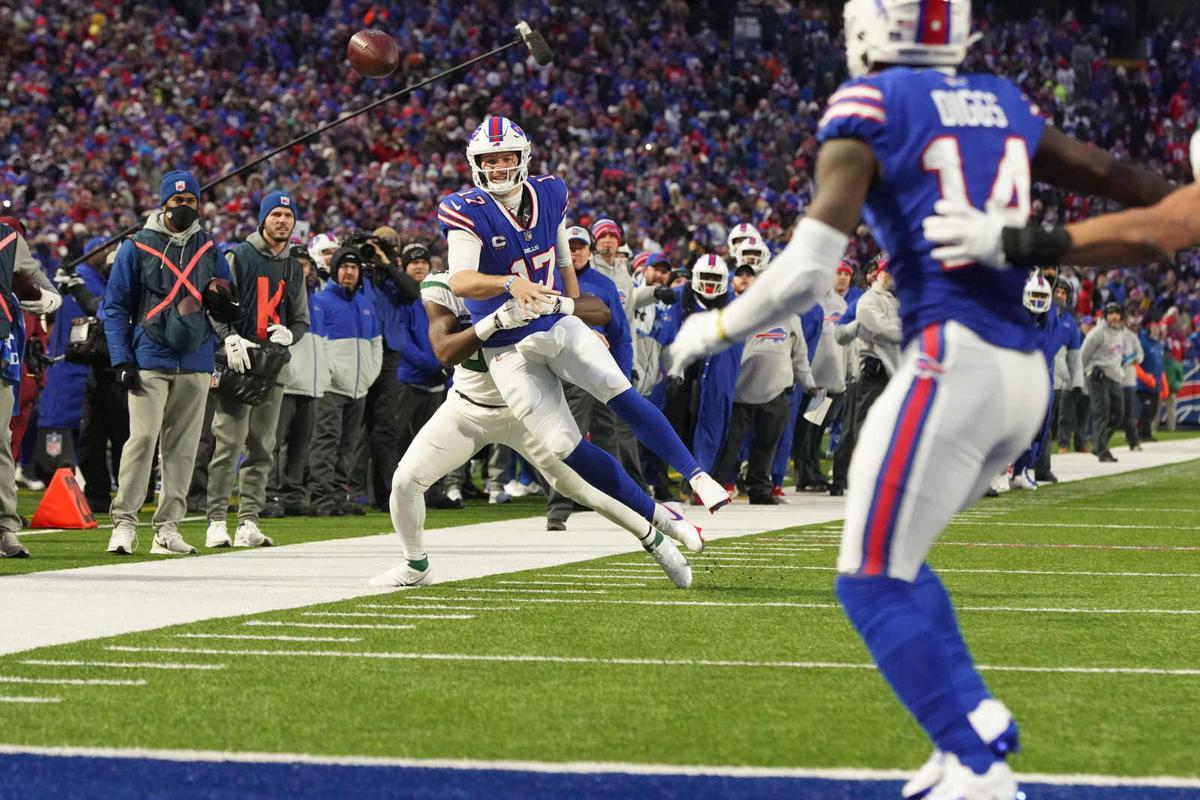