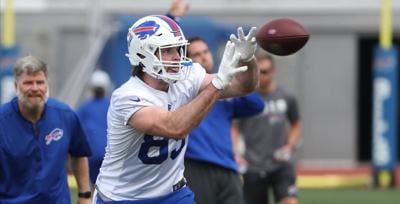 The Buffalo Bills’ tight end had made it nearly all the way back from foot surgery before a positive Covid-19 test in Week 7 of the 2020 season. That was bad enough, but what followed was worse.

Doctors discovered an abnormality during an echocardiogram that was required before Sweeney could return to the field. Further consultation with other cardiologists confirmed that Sweeney was suffering from myocarditis, a rare but potentially serious side effect of Covid-19. Myocarditis is an inflammation of the heart muscle that can reduce the organ’s ability to pump and cause rapid or abnormal beating.

Left untreated, it can cause permanent heart damage or even cardiac arrest.

All those thoughts were going through Sweeney’s mind when the diagnosis was confirmed.

“There was a little bit, because you never know,” Sweeney said Wednesday in an interview with The Buffalo News when asked if he feared his career might be over. “I mean, with this, you still don't know. It's a completely new thing. There was a level of it, but the cardiologists here we talked to were great and just real positive about it. I felt really comfortable with what they wanted me to do, but there was definitely a level of concern. Naturally, when you get told something like this, the heart is different than something else that keeps you off the field in football.”

Sweeney’s 2020 season was immediately shut down. He was ordered to refrain from any sort of physical exertion for three months – a prolonged period of isolation that’s completely foreign to a professional athlete.

“The walls were closing in,” Sweeney said. “It sucked. Every little thing every day, I had to make sure I wasn't doing too much, exerting myself too much. So just being cautious at all times. The worst part was we were having such a good year. I'm happy, that was awesome, but watching it from the couch instead of being out there with the team was the worst part.”

Sweeney was cleared to resume physical activity in early February, not long after the Bills had been eliminated from the postseason with a loss in the AFC Championship Game. After years of near-daily physical activity, the road back has been slow. Sweeney, though, says he’s 100% healthy and has been a regular participant in the team’s spring practices.

“I'm good,” he said. “Hopefully, it's all behind me. I've got to keep tabs on it and check in every now and again, but I feel good. It feels great to be back out there and it feels pretty normal.”

Sweeney stayed in Buffalo this offseason to work with the team’s strength and conditioning staff. He’s thankful for the support he received from them, as well as head coach Sean McDermott and General Manager Brandon Beane.

“They've all had such a huge hand in keeping me up and getting me back, so it was easy to be upbeat with that peace of mind, knowing the organization is with me like that,” Sweeney said. “I've been out there running around. It feels awesome, both mentally and physically.”

Still, the pain of the ordeal is evident in Sweeney’s voice. He speaks haltingly about his experience some seven months later.

“Ending the season, that's never what you want to do. You know, you work so hard to get in the position, especially when I was coming back off of an injury. So yeah, it sucked,” he said. “Hopefully, it's in the past. I still have got to keep tabs on it, of course. Obviously that's not what you want to hear or feel at any point in your career, so it was tough, but hopefully we're through it.”

Sweeney is believed to be the first and, to date, only known NFL player to develop myocarditis following a Covid-19 infection.

In data published in March in the peer-reviewed medical journal JAMA Cardiology, it was revealed that just five of 789 professional athletes in the NBA, WNBA, NFL, NHL, Major League Baseball and Major League Soccer infected with Covid-19 between May and October 2020 developed inflammatory heart disease.

Before those athletes were allowed to return to play, they underwent testing to track heart rhythms, an ultrasound of the heart and a test to measure protein in their blood that can be a sign of heart damage. According to the study, three cases of myocarditis were diagnosed and two more were identified as pericarditis.

According to an article published by ESPN in March, the American College of Cardiology has recommended screening athletes who have moderate or severe symptoms of Covid-19 for a potential heart condition.

Late last month, McDermott was asked whether Sweeney’s ordeal impacted how he viewed the vaccination status of his players against Covid-19.

“Tommy, you know, went through a tough situation last year,” McDermott said. "If anyone needs a reason to, or more information about, whether or not to get vaccinated or not or the Covid situation, I mean, Tommy, he missed all of last season. It affected him for some time.”

Sweeney said he believes his teammates, particularly those who were with the organization last season, are fully aware of what he went through.

“As it happened, I was in the locker room, I was around the building,” he said. “They all know. They're with me and they're real supportive and they have a pretty good understanding of what happened. So they have that knowledge and have seen it firsthand and they have that in their back pocket for making their decision” regarding the vaccine.

Understandably, Sweeney’s view of the pandemic has been shaped by his personal experience.

“Obviously I was the only guy in the NFL to have this ... but it doesn't really make me an expert,” he said. “I'm kind of the same as anybody else. I just take this information in stride and try and learn the most. It's definitely something to consider, but I'm not an expert on the disease or the vaccine or anything like that.”

Sweeney, a seventh-round draft pick in 2019, showed promise in playing six games as a rookie, totaling eight catches for 144 yards. He’ll compete with Dawson Knox, Jacob Hollister, Reggie Gilliam, Nate Becker and Quintin Morris for a spot on the 53-man roster this summer.

“He’s off to a great start,” McDermott said. “He’s in a good spot. He’s worked his tail off. He’s been here most of the offseason and in doing so, invested in his career. Tommy’s a high-energy, bright-eyed young man that’s got a bright future ahead of him. It’s good to have him back and healthy again.”

Knowing what the Bills are capable of has pushed Sweeney even harder this offseason.

“It's a great thing to come back to,” he said. “It helped motivate me through the process to come back. This thing is real. The air around the building, all that's real. I’m just happy to see the growth we've been taking every year and being a part of it is exciting. I'm happy to be back.”

I started at The Buffalo News in 2009, and have previously been honored as one of the top 10 beat writers in the country by the Associated Press Sports Editors for my coverage of the Bills. I live in Amherst with my wife, Melissa, and son, Elliott.

Bills Mailbag: How many quarterbacks should be kept on the 53-man roster?

Will Josh Allen, Mitchell Trubisky, Davis Webb and Jake Fromm all find a roster spot on the Bills for the upcoming season?

"Noise is noise," Singletary said. "I don't pay attention to it. There's always going to be noise if you do good, if you do bad. That's just what it is."

Sweeney, who has missed the entire season with a knee injury, had been placed on the league’s Covid-19/reserve list in late October after being deemed a close contact with tight end Dawson Knox. 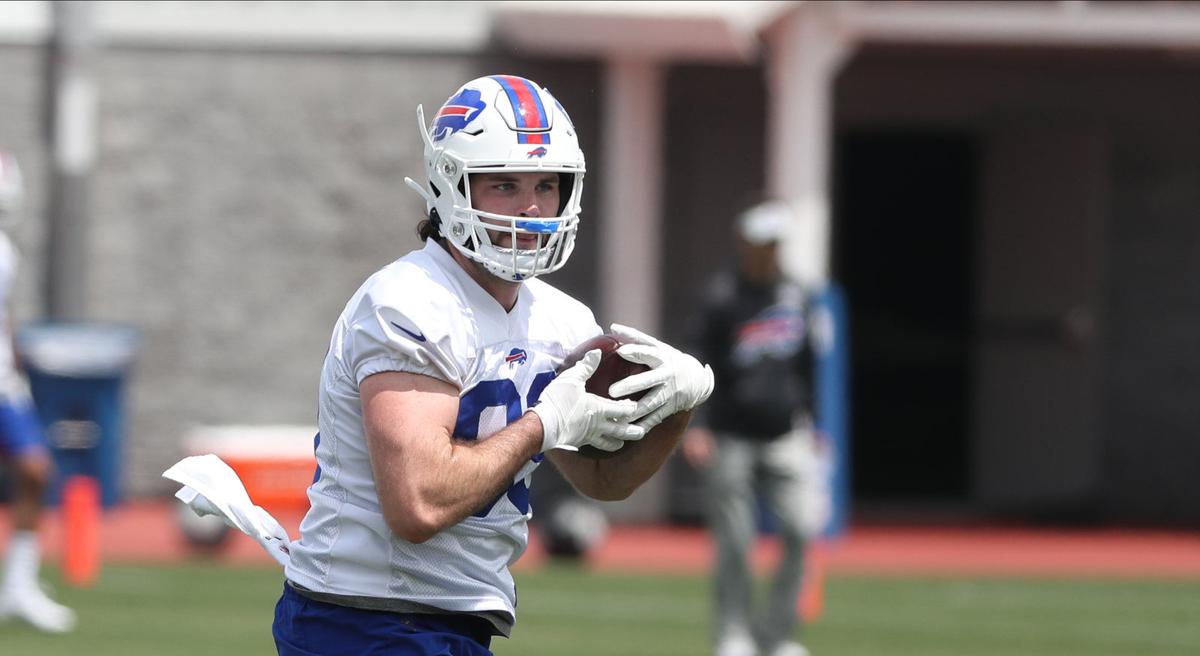 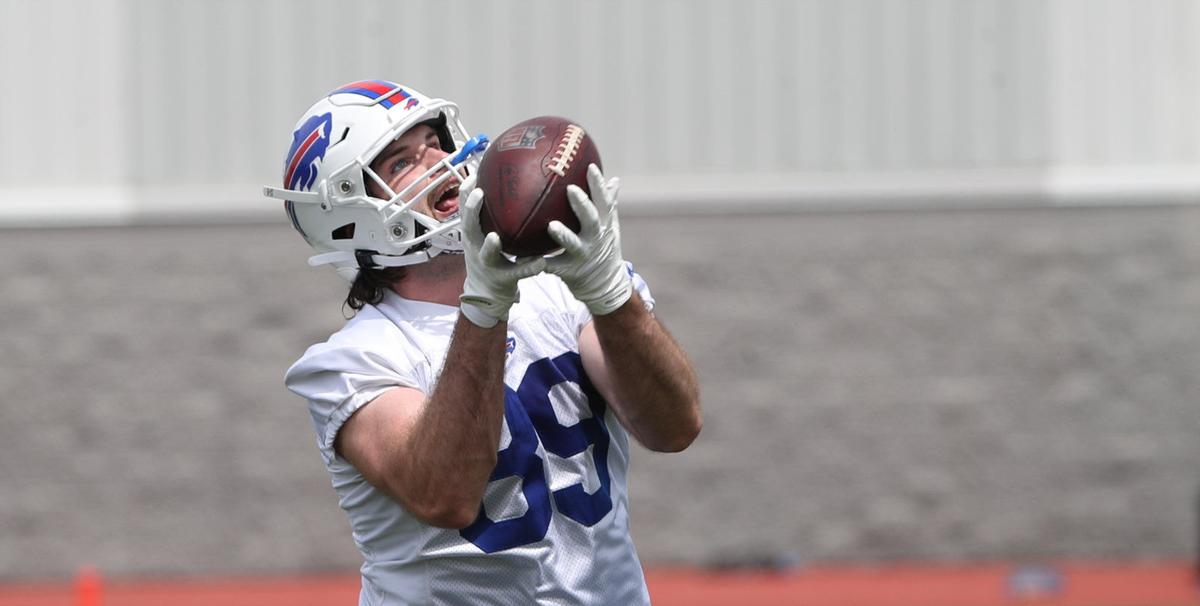