Inside the Bills: 'Community Day' born out of NFL's social-justice initiative
0 comments
Share this
Support this work for $1 a month
1 of 4 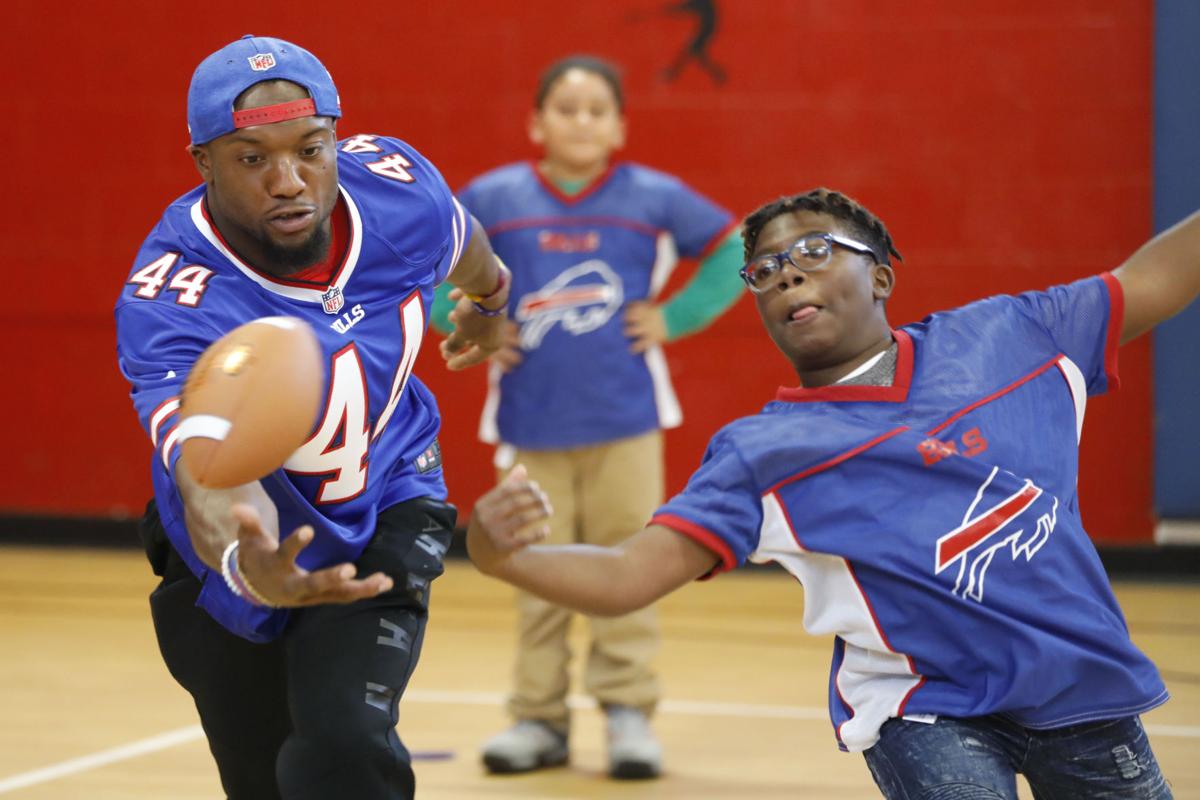 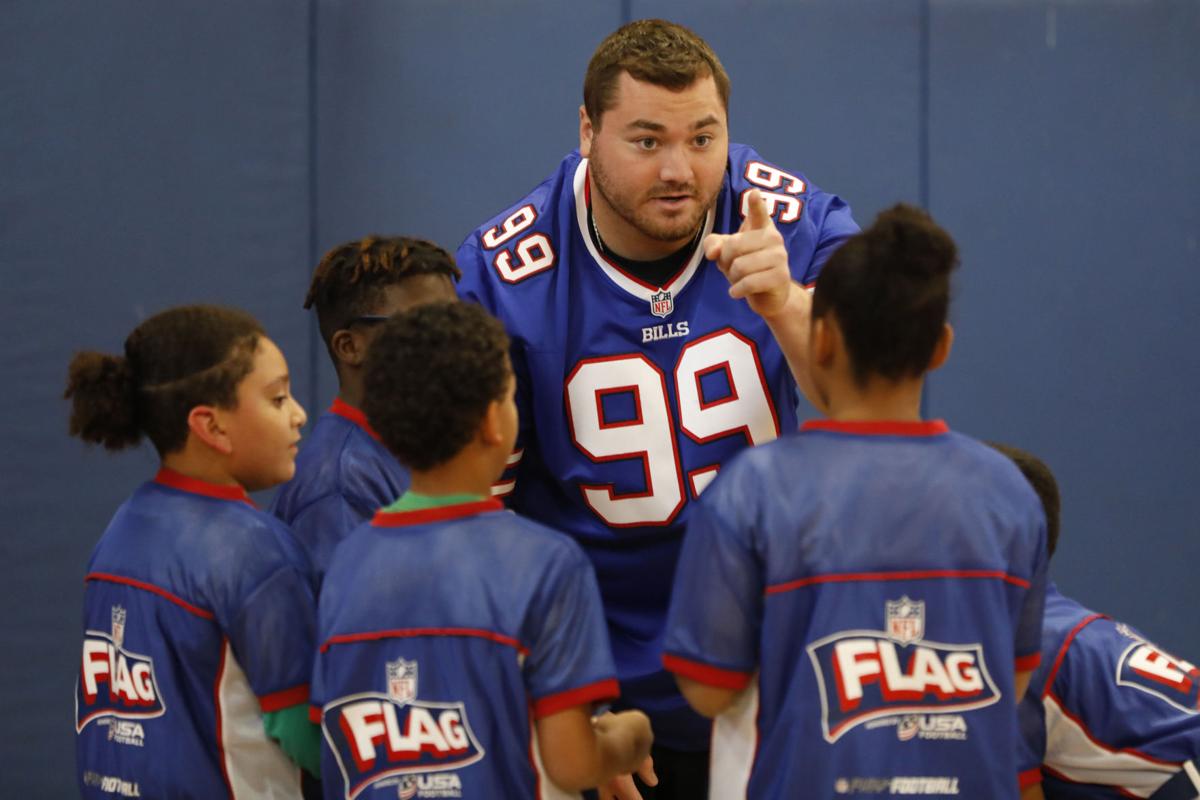 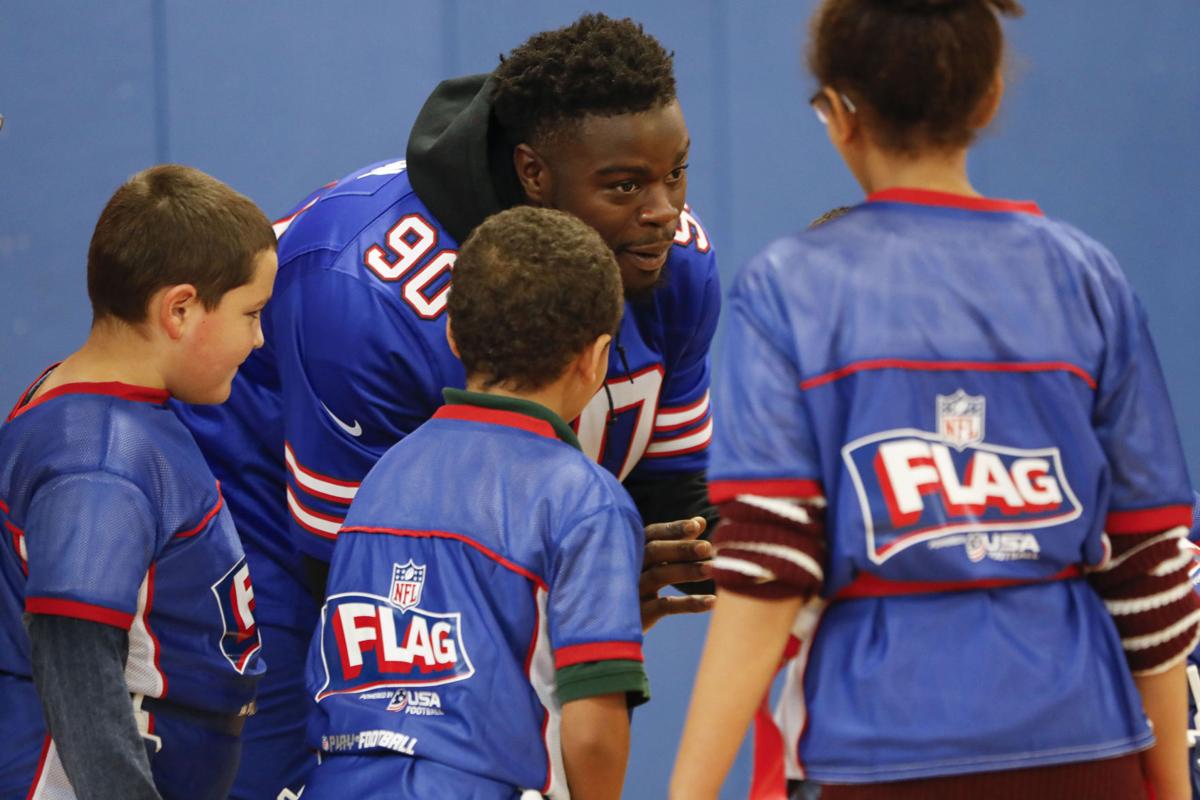 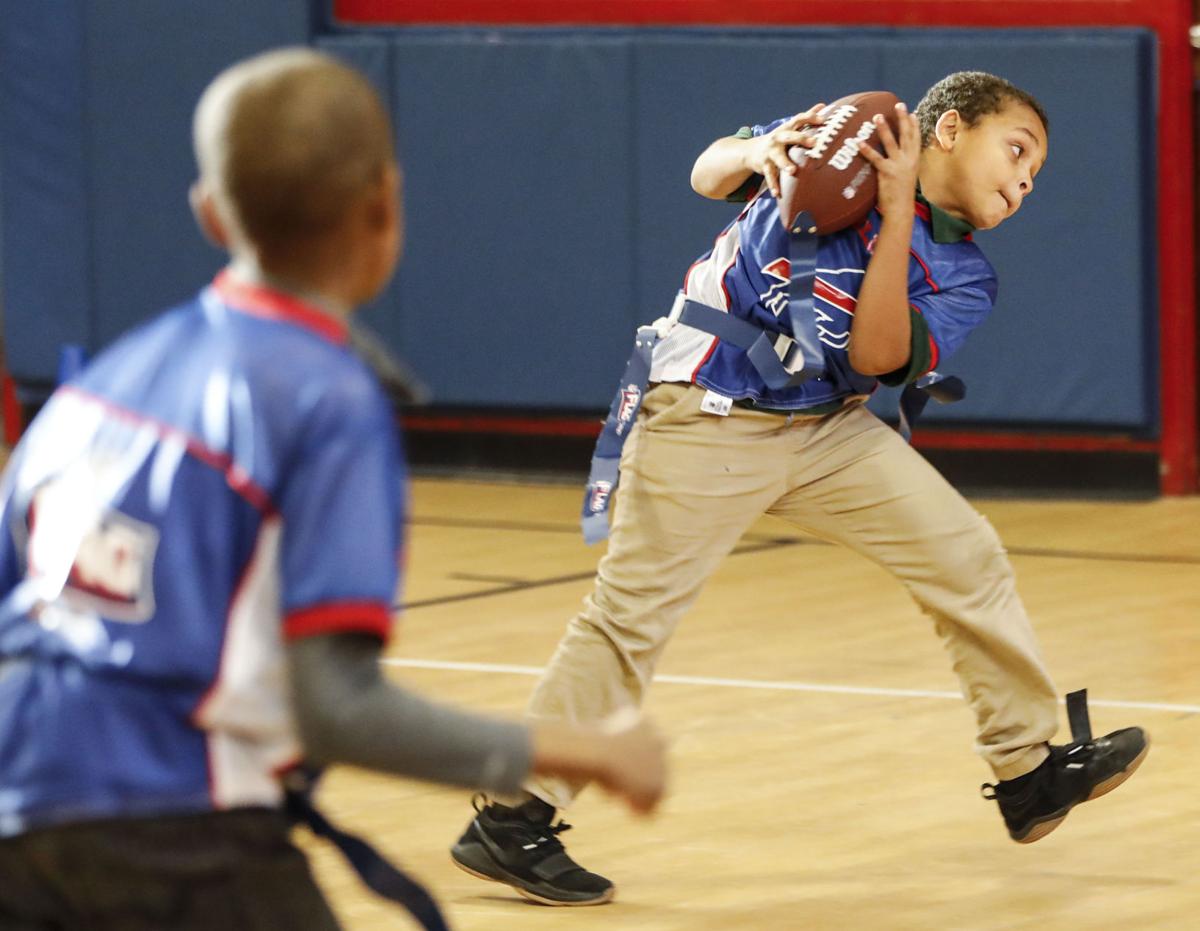 Words have turned into actions for the Buffalo Bills.

A little more than a year ago, a team meeting was called the night before a home game against the Denver Broncos. The push for social-justice reform had never been stronger in the league, spurred on by President Donald Trump’s inciteful comments about players who protested during the national anthem.

Team owners Terry and Kim Pegula, coaches and players met for a little more than an hour, with raw emotion pouring out. As part of the resolution, it was determined that players wanted to come up with a day dedicated to going out into the community to make a difference.

That day came Tuesday, as a group of Bills made stops at four different locations throughout the city.

At the Boys and Girls Club on Massachusetts Avenue, Harrison Phillips, Shaq Lawson, LeSean McCoy and Deon Lacey were among those who played flag football and talked with kids during dinner.

Geitter can be seen after most practices, recruiting players to participate in any number of community events.

“Very often they're being thanked for coming out into the community, and they're getting as much out of it as the kids are,” she said. “They really, really enjoy being able to get out and spend time with the youth in our community.”

That was on display at the Boys and Girls Club, where Phillips, McCoy, Lawson and Lacey quarterbacked flag football teams. Lawson took a good deal of grief from his teammates – and kids – after throwing a pair of interceptions. When McCoy walked into the gym, he was mobbed by children.

“To impact a kid like that, I don't know who he is, but to see the enjoyment in his eyes, it feels good,” McCoy said. “As a ball player, we get so focused on our job … then you get back to reality when you come here. To see a kid's reaction, throwing the ball to them – when they go home tonight, they're going to tell older brothers or parents about the experience they had with us today. Don't get me wrong. It's for sure about winning championships, winning games, making money, having fun, taking care of family, but the bigger platform we have is stuff like this, to really impact the kids. That's the next generation.”

McCoy grew up in a stable household with both parents, but knows not every inner-city kid is so fortunate. That’s why he has a soft spot for the Boys and Girls Club, which is where he spent plenty of time growing up.

“I didn't grow up in nice neighborhoods,” he said. “A lot of my old friends, they got involved with the wrong crowds. The good thing is we would all come to the Boys and Girls Club. It gave us a chance to have fun, put everything aside that's going on outside. ... It's a cool thing to be able to come back here.”

“It’s wonderful to know those roots are strong,” said Jehrin Calhoun, the director of programs for the Boys and Girls Clubs of Buffalo. “The connections are there, and they’re life-lasting. We teach here about giving back. It doesn't matter where you are in life, or what your situation is. You're always in a place to be able to give back. Players coming, giving back to the community, it reinforces those positive traits that we want our kids to have.

“The kids, they see these guys on television, and sports being such a big component at the Boys and Girls Clubs, the kids remember these type of things. It shows them, ‘you are noticed. There are people in the community who do care about you.’ ”

As part of the league’s response to the social-justice reform movement that started with former 49ers quarterback Colin Kaepernick, the NFL started a player-led platform to engage with team owners, public officials, law enforcement, academic institutions, community partners and others to identify meaningful ways to strengthen local communities and the greater society.

Players on every team in the league have been challenged to raise $250,000, which will then in turn be matched by their teams.

“Ultimately, we could raise a half-million dollars, and do that annually,” Alexander said. “That's a significant amount of money that would mean a lot to the places we visit.”

Alexander is part of a leadership group dealing with the social-justice initiative, along with Hyde, Hauschka, Phillips, Hughes, Josh Allen and Tremaine Edmunds.

“Over time, it will evolve and change. We tried to get a culmination of ages, different backgrounds, different experiences so as guys come and go through the league, there's enough guys who will be here, they understand what it's about and they pass that tradition or culture on over time,” Alexander said. “In a couple years, I won't be here. Somebody who is replacing me is going to have a different vision. We wanted to establish the ground work and the footprint for it so that it's turn key. When guys come in, there's already a culture established.”

When Alexander does move on, the Bills have a worthy successor lined up to take over in a leadership role. Phillips has gone out of his way to take an active role in several different charitable endeavors, both here in Buffalo and in California, where he played at Stanford, and his home state of Nebraska.

“I think it probably starts with the fact that my mom ran an at-home daycare my whole life,” Phillips said. “I'm comfortable being around kids. I found a passion with it. To realize I now have a platform, where these kids might listen to what I have to say a little bit more intently, I think a lot of guys on our team understand that.”

The Bills under Sean McDermott and Brandon Beane have made it a priority to bring in people they believe will do good in the community.

“Part of the thing that goes into it aside from staying after practice and being a good guy in the locker room is paying it forward,” Phillips said. “That's a big thing our culture supports, trying to get out in the community as much as we can and use our platform.”

Phillips is on the board of directors of a non-profit foundation in Sacramento, Calif. The Playmakers is an after-school program that focuses on literacy, character values and physical activity.”

‘I saw a change in those kids’ lives the four years I was out there,” he said. “That adds more fuel to that burning passion.”

He hopes to establish a charity in Buffalo, “once I establish myself as a football player.”

“When we’re a winning team, in the hunt for the playoffs and I’m playing well, that platform can get even bigger,” he said.

“The focus has been on listen and learn, understanding what the players want to accomplish in their community, the impact they want to have and supporting them,” he said. “Our clubs have done that on historic levels and I'm proud of what our clubs are doing. I'm proud of what our players are doing. We are all trying to work together to address those issues. That always helps make relationships more productive when there is respect and dialogue and understanding and an agreement to work together and try to make things better.”

Tuesday’s appearances were not unlike other similar events players have taken part in forever. They have, however, taken on a new meaning since Kaepernick started his protests in August 2016. Kaepernick’s intent was to bring attention to causes close to him, two of which are racial inequality and police brutality.

So the significance of the Bills working together with police officers at the PAL should not be lost.

“It's a start,” Jones said. “There's a lot of work to be done to fix the problems in inner cities, but it's definitely a start. The fact we're on the same page, the police officers, the athletes, when we can come under one roof and hear each other out, I think that's great.”

“Our world is messed up. We all know it,” Dawkins added. “For those kids to see us, the law enforcement and regular people getting together and all coming together as one, they see that, and there's no tension or anything. It's just positivity. Hopefully these kids see that's possible.”

Kaepernick has not played since the 2016 season, but he was again in the news when Nike made him the face of a recent campaign ad. That again led to debate over how he has gone about trying to force change.

“One thing I give him a lot of credit for is he's actually going out to these places, talking, speaking, doing different things,” McCoy said. “That takes a lot. Guys make a lot of money, they have fun, they can do what they want, but the big picture is what they do in the communities. That's why I like doing stuff like this.”

The good that players do in the community can sometimes be lost. It’s true that it doesn’t get the publicity that a player getting in trouble does.

“I look at myself, there's a ton of stuff I do in communities,” McCoy said. “Where I'm from, where I play at now, where I played at before I got here, I'm always in the community doing different things, but it's not looked at the same if you do something wrong.”

“We live in a tight-knit community. I grew up here in Western New York, and the Bills have always been such a part of the fabric of the community. It's nice to see the good things be covered,” Geitter said. “So many of our players are doing things so often, and sometimes they don't want anyone to know. We respect that. But sometimes it's nice to because there's so many good organizations doing good work, if we can help highlight that, we consider that to be a privilege.”

It's one that Alexander and others don’t take lightly.

“As things evolve, we want to be in control of where we want this to go,” he said. “That's what the social-justice protests pretty much came out of: Let's do things that players are passionate about, that we can see real change in our community.”

Inside the Bills: Social justice messages players and coaches will share Sunday

The message Thursday was clear: The NFL is no longer afraid of backlash from fans.