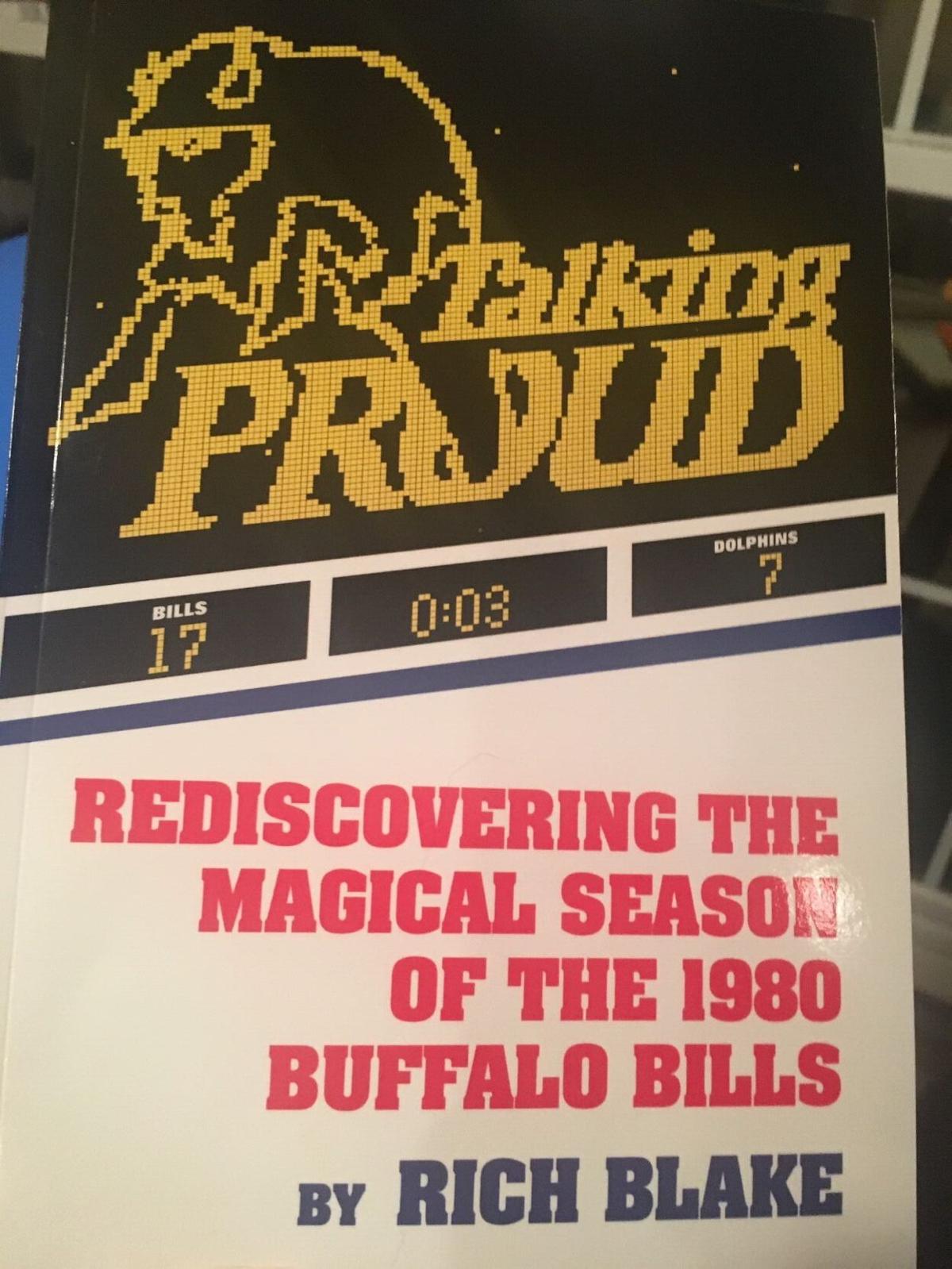 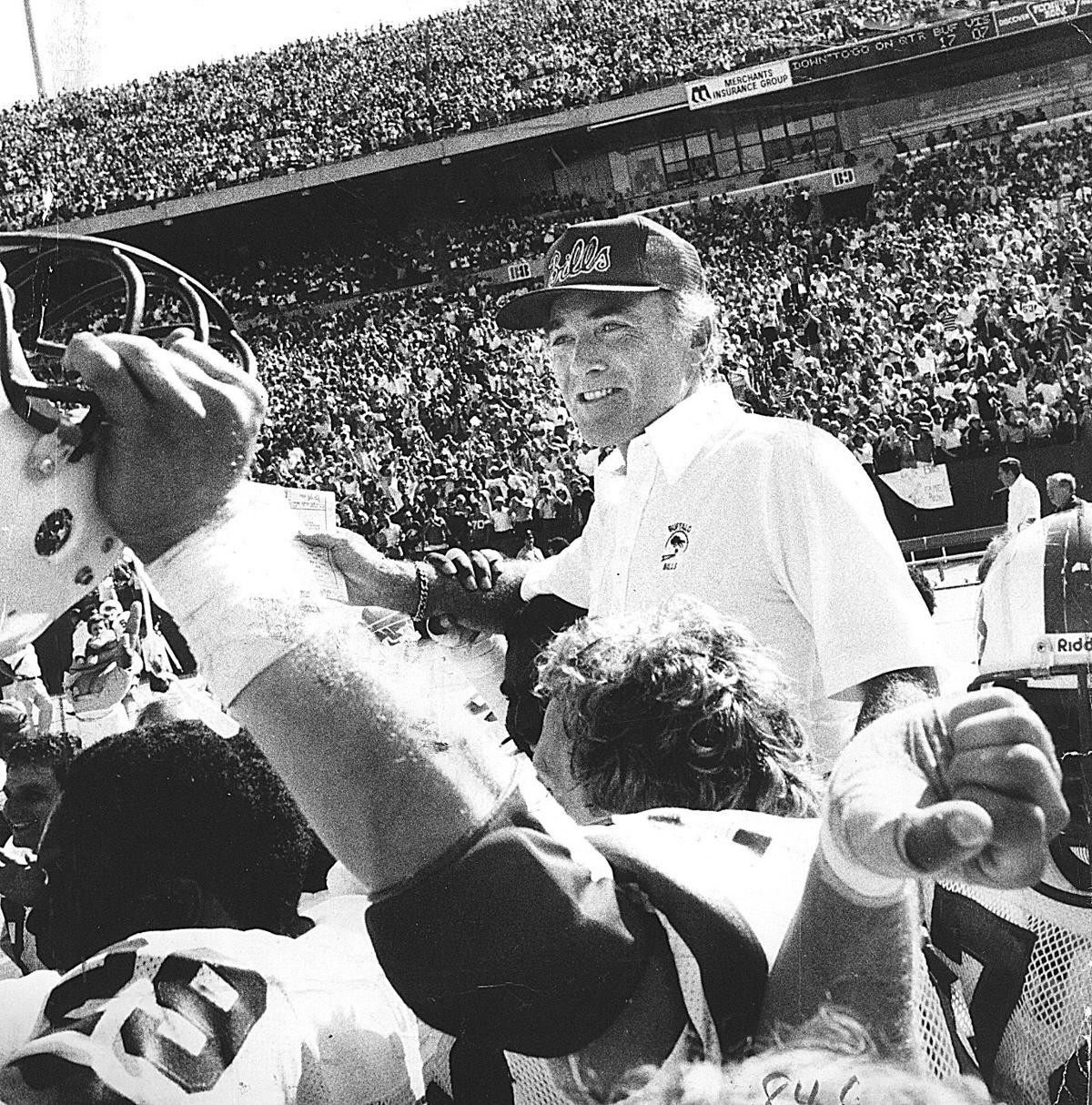 Buffalo Bills head coach Chuck Knox is carried off the field after the Bills defeated the Miami Dolphins ending their 20-game losing streak against the Dolphins. Taken on Sept. 9, 1980. (News file photo)

This is the story of how a TD catch turned a TV catchphrase into a toe-tapping time capsule of Buffalo sports history.

If you are of a certain age, you probably remember the ear-worm boosterism of that jazzy jingle. It was cheesy and annoying – but, as Rich Blake says, it was ours.

He is a veteran journalist who wrote a book on how the 1980 Buffalo Bills and that zippy ditty came together to light a fuse under a Buffalo Chamber of Commerce ad campaign, sending it into the stratosphere. It all happened 40 years ago this week, when the song made an appearance at a Bills game unlike any other.

The Pittsburgh Steelers of Terry Bradshaw and Mean Joe Greene came to town as a dynasty. They had won four of the previous six Super Bowls, including the last two. But more than that, they came with an invading army of 35,000 fans – almost half the nearly 80,000 attendees. This was because the Bills, during the offseason, had offered tickets to that game to Steelers season-ticket holders, thus ensuring a sellout. After all, in 1979 the Bills had drawn less than half the stadium’s capacity for their last home game – and no one yet knew how good the 1980 Bills would be.

Bills fans weren’t happy about it. Courier-Express sports columnist Phil Ranallo said selling so many tickets to Steelers fans was akin to President Carter selling nuclear weapons to the ayatollah. Courier cartoonist Mike Ricigliano asked Bills fans to follow proper etiquette by telling the visiting fans where to sightsee (Love Canal) and how to get to the game (leave at 12:30 p.m. sharp – and take the Thruway).

“The Steelers were the gold standard of the era – and this game was a Super Bowl onto itself,” says Blake, author of the 2005 book “Talking Proud: Rediscovering the Magical Season of the 1980 Buffalo Bills.”

The chamber released its Talking Proud campaign in 1980 as a way to goose the self-esteem of Buffalonians worn down by late-night Johnny Carson jokes in the years after the Blizzard of ’77. The jingle debuted on local TV and radio in September to no discernible delight from the populace, despite repeated airings all through that autumn, thanks to $3 million worth of donated airtime.

Bills can win with the Hail Mary, too. Just ask Roland Hooks

Roland Hooks is here to tell you about the time the Bills won with a Hail Mary – a season-saving wing and a prayer in 1981 that landed in his hands.

For weeks, the chamber’s Pat Donlon had been trying to get the Bills to play the Talking Proud jingle at their games. Finally, for the Steelers game on Nov. 23, history and happenstance would meet, musically, at midfield.

Fred Smerlas, the Bills’ ebullient nose tackle of that era, says the Bills were angry “when we came out and saw all that Steelers yellow all over the place.”

Bills coach Chuck Knox used the imperious presence of all these Pittsburghers for a pithy pregame oration peppered with 12-letter expletives, as Smerlas recalls it.

The nearly even split of fans gave this game the atmosphere of a high school rivalry where rooters from each side strive to outshout the other. The Steelers took a quick 7-0 lead on a Franco Harris run. The full-throated invaders roared their approval and spun their terrible towels, leaving frustrated fans of the hometown team to wonder how they could protect their turf – or, in this case, Astroturf.

Then, it happened: The Bills tied the score at 7 on a 29-yard Joe Ferguson pass to Jerry Butler, who somehow reached back on an underthrown ball to make a circus catch over Steelers All-Pro Mel Blount. That’s the moment when Mike Shaw, the Bills’ assistant director of public relations, gave the order to play Talking Proud over the stadium sound system. Suddenly Bills fans were singing in their seats and dancing in the aisles.

This wasn’t just a jingoistic jingle anymore. Now, in the context of eclipsing the towel-twirlers, it had morphed into an anthem of communal merrymaking.

Buffalo’s got a spirit,

Listen up and you’ll hear it,

With nice people who care,

It’s time to tell ’em all

We’re up and standing tall.

The original plan was to play it once. But the joyous reaction was so outsized that Shaw ordered it up again – and then again and again. The song played after each of the Bills’ touchdowns – another one to Butler, a run by Curtis Brown, a catch by Reuben Gant – as well as after several other key plays. The Bills stomped the Steelers, 28-13 – and the jaunty jingle became the soundtrack of that game.

Tommy Heinsohn and Johnny McCarthy were Celtics teammates in the 1963-64 season, when McCarthy won his only NBA championship. He wore the ring for the rest of his life.

“I think the Bills fans were just kind of drunk and euphoric,” Blake says, “and when they heard that song in that moment, something clicked.”

The ringing of a bell made Pavlov’s dogs salivate – and the singing of a song made Bills fans do the same. Soon the tune came to mean touchdowns and victory, in the same way that the “Shout” song does today.

Blake, 52, is a freelance journalist who covers finance for Forbes and other business publications. He’s been writing about asset management and financial services since 1995 – Wall Street by way of Abbott Road. He grew up in West Seneca, near where it meets South Buffalo and Lackawanna, and graduated from Canisius High School and St. Bonaventure University. One of his earliest memories is of his father taking him to see the new Bills stadium being built in Orchard Park in the early 1970s. When it got the name Rich Stadium, his father told him it was named for him. And little Rich believed it.

His book tells how the Buffalo adman Alden Schutte came to write the lyrics for the campaign: “This endeavor wouldn’t be about getting people to feel better about Buffalo, but rather about getting people to outwardly celebrate how positive they already felt about the town from the inside. The concept – to tell the rest of the world what Buffalo already knew – quickly took shape, and a working title emerged: ‘We’re Talking Proud.’ ”

Blake spoke by phone over the weekend from his cabin in the Catskills, where he said he’d spent the afternoon raking leaves – and singing the song.

“My favorite part is: ‘This good life that we share, with nice people who care.’ That’s Buffalo. We don’t give a (hoot) about what people think of us. We love Buffalo. That was the whole point. They wanted to get everyone feeling good about themselves.”

By the time that Steelers game was played, Blake was a 12-year-old paperboy for the Courier-Express – and thus already in the journalism biz.

“I would finish delivering papers on Sunday mornings, and I could just feel the world moving toward Rich Stadium," he said. "It was like I was part of it in my own childish imagination.”

He watched that Bills-Steelers game at home on TV. Two weeks later, at the next home game, Blake and some of his young pals snuck into the stadium and saw the Bills beat the Los Angeles Rams, 10-7, in overtime. When Nick Mike-Mayer’s 30-yard field goal sailed through fog and rain to win it, the Talking Proud song began – and it played on and on in a loop as the scoreboard’s 10,000 40-watt bulbs displayed the Talking Proud logo.

Blake’s book tells how the artwork “lit up like gold, filling the stadium with a warm, shimmering light” – and how the sound crew asked Shaw if it was time to stop the song. “He told them, ‘What the heck, keep playing it.’ ”

The fans wouldn’t leave the stadium, even after the Bills had left the field. They beseeched their Bills for a curtain call. And, sure enough, a dozen players returned, some in gray T-shirts and shoulder pads, to join the Buffalo Jills for an arm-in-arm, high-kicking, Rockettes-style celebration to the strains of – what else? – Talking Proud.

“These people of Buffalo are unbelievable,” Smerlas said that day. “They deserve anything we’re able to give them. If they want us to go out there and dance around a little bit and sort of party with the guys in the stands, we’re going to do it.”

Talking Proud is a dreadful piece of music, but a wonderful piece of our past. If you’ve never heard it, or haven’t in a long time, click here for the 30-second version on YouTube. There we are, strutting our stuff, elbows up, telling a world that isn’t listening how great we are. Which is totally fine. It was always more about convincing ourselves than anybody else, anyway.

Now play it again, this time with your eyes closed. Suddenly, it’s Fergy to Butler all over again. That season, the jaunty jingle came to mean first downs and touchdowns. And it emerged first as a mellifluous way for Bills fans to say: Lay down your terrible towels – and listen to our terrible song.

Just don’t tell Smerlas it’s terrible. He loves Talking Proud. It takes him back to a time and place.

Of fathers, sons, dropped footballs, Bills Mafia and believing in the impossible

I raised my son, Steve, as a Buffalo Bills fan in the Virginia suburbs of Washington. This wasn’t always easy on him, writes Erik Brady.

Ed Rutkowski may be the only person on the planet who knew exactly what Kendall Hinton was going through.

Bob Costas isn't from Buffalo, but he's got a lot of Buffalo in him

The first NFL game that Bob Costas called for NBC Sports came 40 years ago, in Buffalo, when the Bills beat Miami on opening day to break a 20-game losing streak against the Dolphins.

While O.J. Simpson rushed for 157 yards and two touchdowns, Cheyunski, a linebacker set up the two scores with key turnovers.

Buffalo Bills head coach Chuck Knox is carried off the field after the Bills defeated the Miami Dolphins ending their 20-game losing streak against the Dolphins. Taken on Sept. 9, 1980. (News file photo)