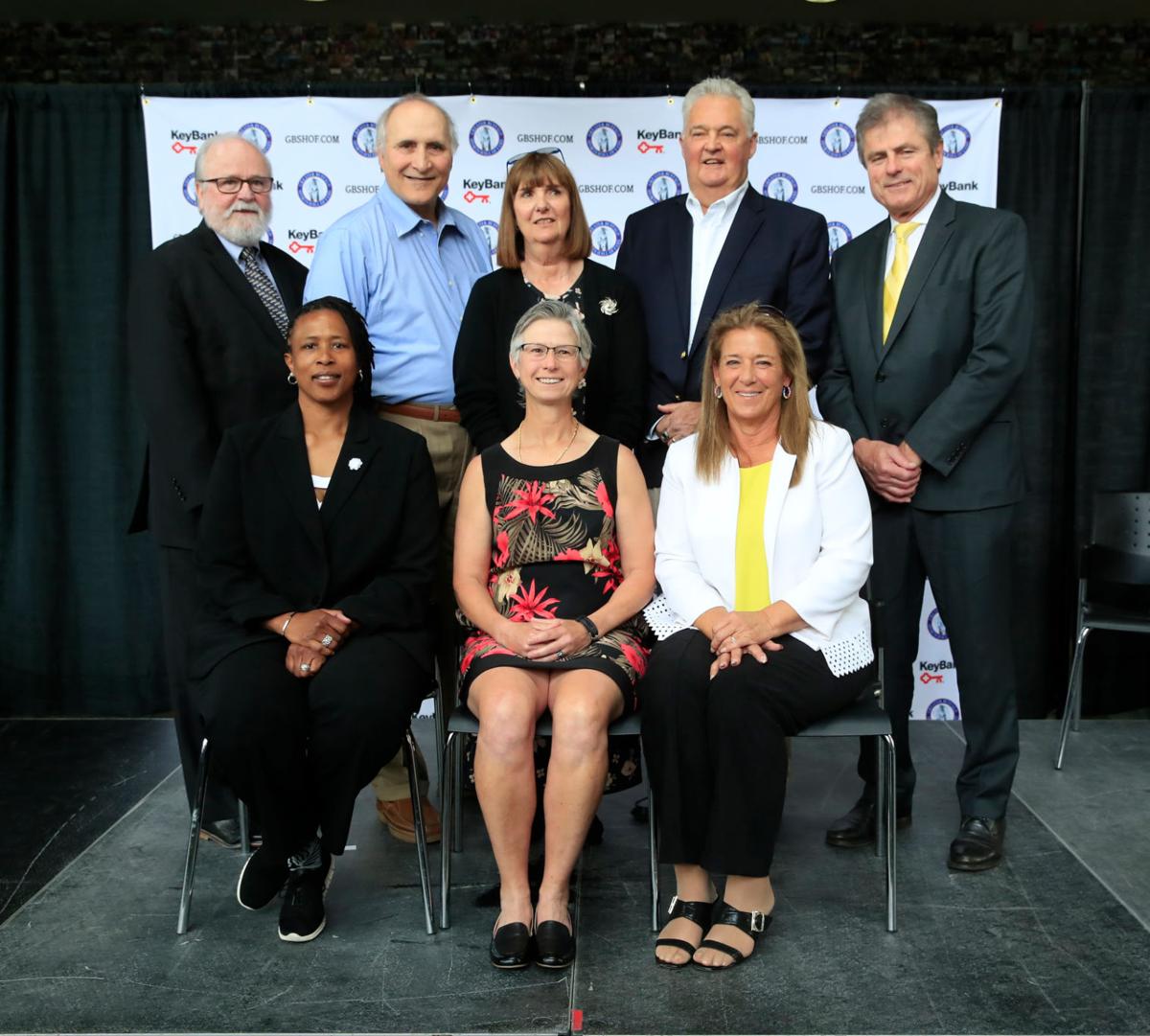 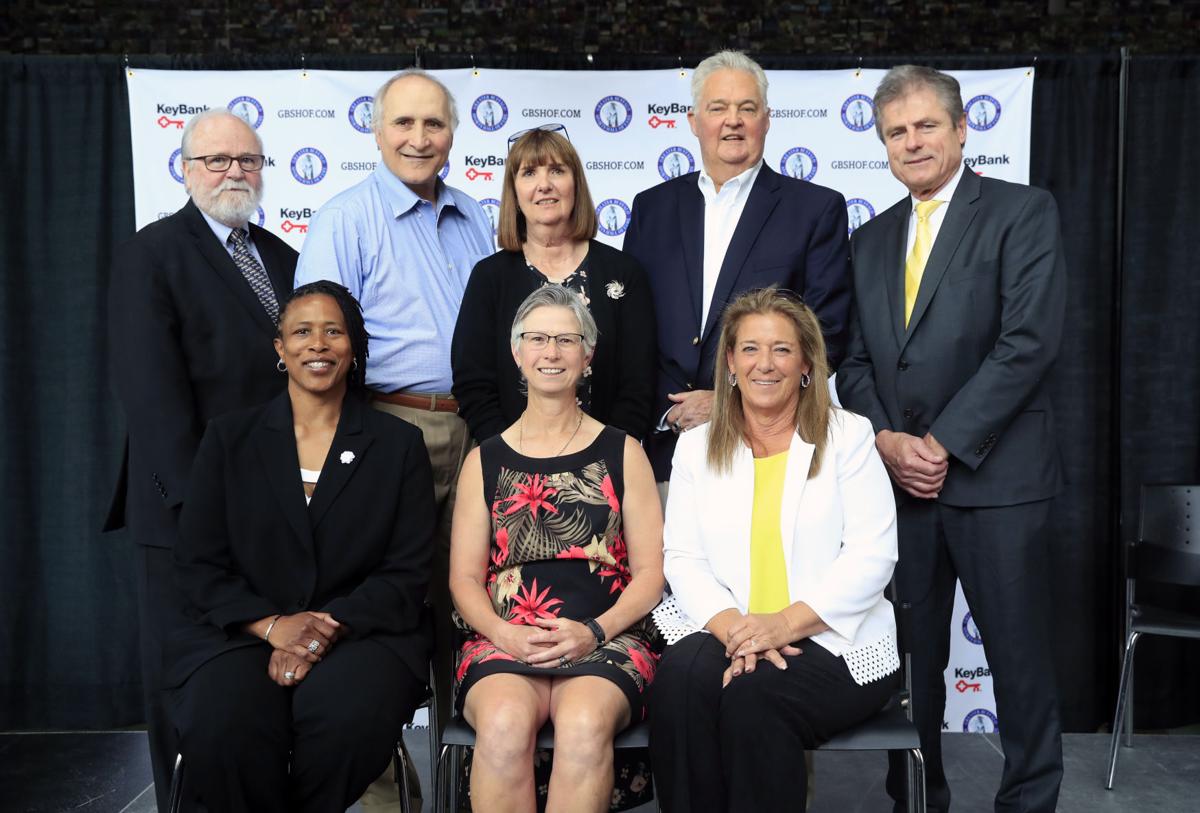 Len Jankiewicz surveyed the roster of the 2019 inductees into the Greater Buffalo Sports Hall of Fame, and let the magnitude of the honor sink in for a few seconds.

Jankiewicz coached football and was the athletic director at Lancaster High School for more than 40 years. Yet he wondered how his accomplishments in coaching and athletics administration compared to the individuals who joined him in this year's class, including a United States Olympian, a former second-round NHL Draft pick and one of the nation’s top field hockey officials.

Jankiewicz is one of 13 inductees into the Greater Buffalo Sports Hall of Fame this year; eight from its 2019 class of inductees were introduced Tuesday at KeyBank Center, including two posthumous inductions.

“All of the inductees have varied backgrounds,” said Jankiewicz, a Lancaster High graduate who also established the Western New York Amateur Football Alliance. “It’s great to see the variety of backgrounds of sports success represented by this class. I’m profoundly humbled to be included among all of them. Out of the 343 in the Hall, I have to be so thankful that I can get in. I’m nothing special, but I’m a product of the people around me.”

Dorothy Jones, who played basketball at McKinley High School and at the University of Louisville, learned of her induction in April.

“It was surreal, it was unbelievable,” said Jones, who officiated Division I women’s college basketball for 10 years and now officiates Division II, II and junior-college basketball games. “At first you say to yourself, ‘am I even worthy of this call?’ And then, after you get off the phone and fall to your knees and thank God for this opportunity. I just never thought I’d get this recognition.

In addition to Jankiewicz and Jones, four more inductees were at KeyBank Center on Tuesday: Chuck Crist of Salamanca, who played football at Penn State and in the NFL; Joe Horrigan, a South Buffalo native and executive director of the Pro Football Hall of Fame; Peter Scamurra, the first player born in Buffalo to be drafted by an NHL team; and Barb Wachowiak of Hamburg, who is one of the top officials in field hockey and was an All-America field hockey player at Ithaca College.

The Greater Buffalo Sports Hall of Fame will make five posthumous inductions: Peggy Wattles, a champion golfer in the 1920s and 1930s from Buffalo; Will and James White, brothers who were a pitcher-catcher battery for the Buffalo professional baseball teams late in the 19th century; Adam Beattie Gunn, a track and field athlete who competed in the 1901 Pan-American Games in Buffalo; and Ed Hughes, a Kensington High and Tulsa University football player who was an NFL defensive back and coached the 1971 Houston Oilers.

“It’s unbelievable, amazing, all of those words,” said Wachowiak, a Hamburg High School graduate. “I never thought I’d be in this position, because that’s not how I live my life or my career. I always want to be better than the day before, so this is a huge surprise, and I’m very grateful.

The Greater Buffalo Sports Hall of Fame will now have 343 inductees since its inception in 1991.

Horrigan and Jones addressed the audience in the lobby of KeyBank Center, and Horrigan emphasized the value of sports, especially as it related to the 13 honorees.

“Sports is a unifier, and sports is really about communities,” said Horrigan, a Canisius College graduate. “That’s what the Greater Buffalo Sports Hall of Fame does. It unites.”

The Buffalo Bills have a better idea of how much money they'll be able to spend in 2021.

Analysis: Missing out on J.J. Watt stings some, but Bills' offseason is far from over

"The J.J. Watt sweepstakes came to an end Monday with the Buffalo Bills failing to be in possession of the winning ticket," writes Jay Skurski.

Bills offseason questions: Where does Ed Oliver stand after Year 2?

“When you look at the film, I think Ed has made improvements in his second season,” offered coach Sean McDermott. “Do I think there is more work to be done? Absolutely.”

What kind of blocking scheme do the Bills want to run? The answer to that question may determine Mitch Morse’s future with the team.

Bills offseason questions: Is it guaranteed that Tremaine Edmunds' option will be picked up?

Because Edmunds was named to the Pro Bowl for the 2020 season, his fifth-year option will be equal to the transition tag for a linebacker in the 2021 season – projected to be about $13.4 million.

J.J. Watt watch is over for Bills – former Texans defensive end to sign with Cardinals

The former Houston Texans' defensive end announced Monday – with a picture of himself on Twitter – that he's going to sign with the Arizona Cardinals.

Phil Martello was having trouble falling asleep Sunday night when the lifelong Buffalo Bills fan began scrolling through the accounts his wife follows on Peloton.

Bills offseason questions: Should the franchise tag be an option for Matt Milano?

The Buffalo Bills’ linebacker has given the team a terrific return on investment over his first four years in the NFL, developing into an impact starter after being a fifth-round draft pick.

Keeping in mind that free agency will alter draft needs, here is The News’ first mock draft of the 2021 offseason, taking on the first round, plus the Bills’ two other top-100 selections.