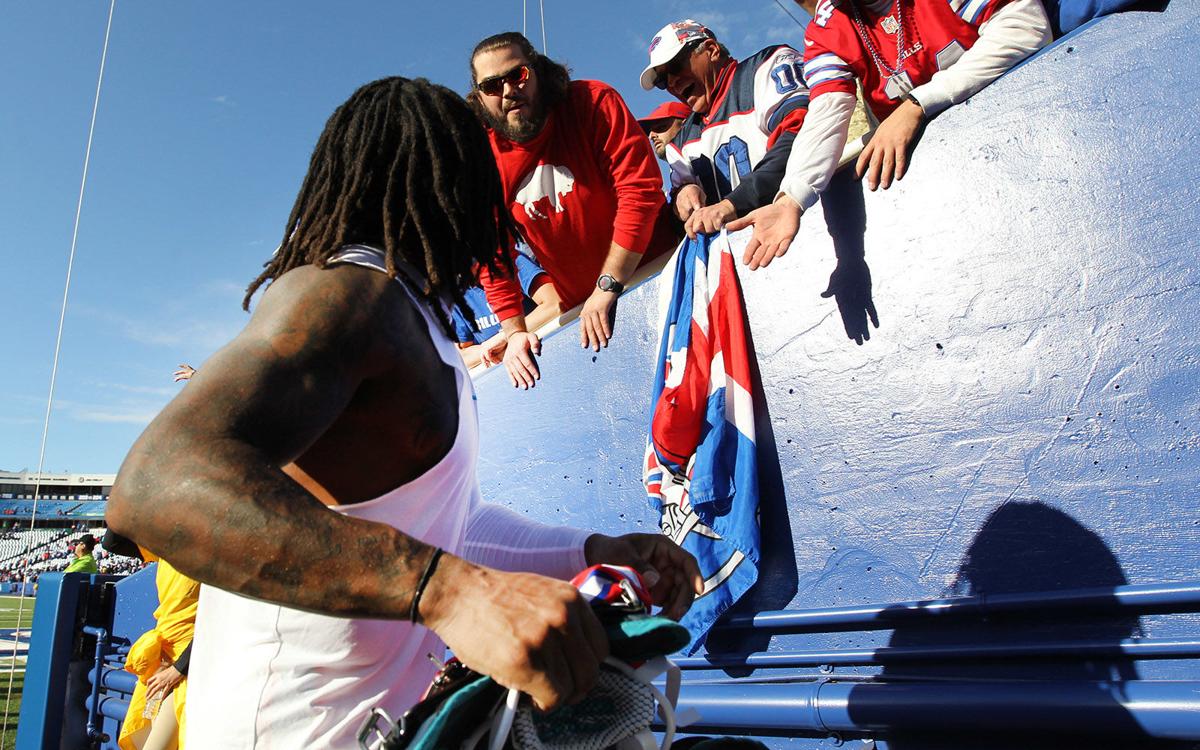 A fan yells at Miami Dolphins safety Bobby McCain who was walking to the end zone tunnel at the end of the game at New Era Field on Sunday, Oct. 20, 2019. The fan said McCain had just spit at him. (James P. McCoy/Buffalo News) 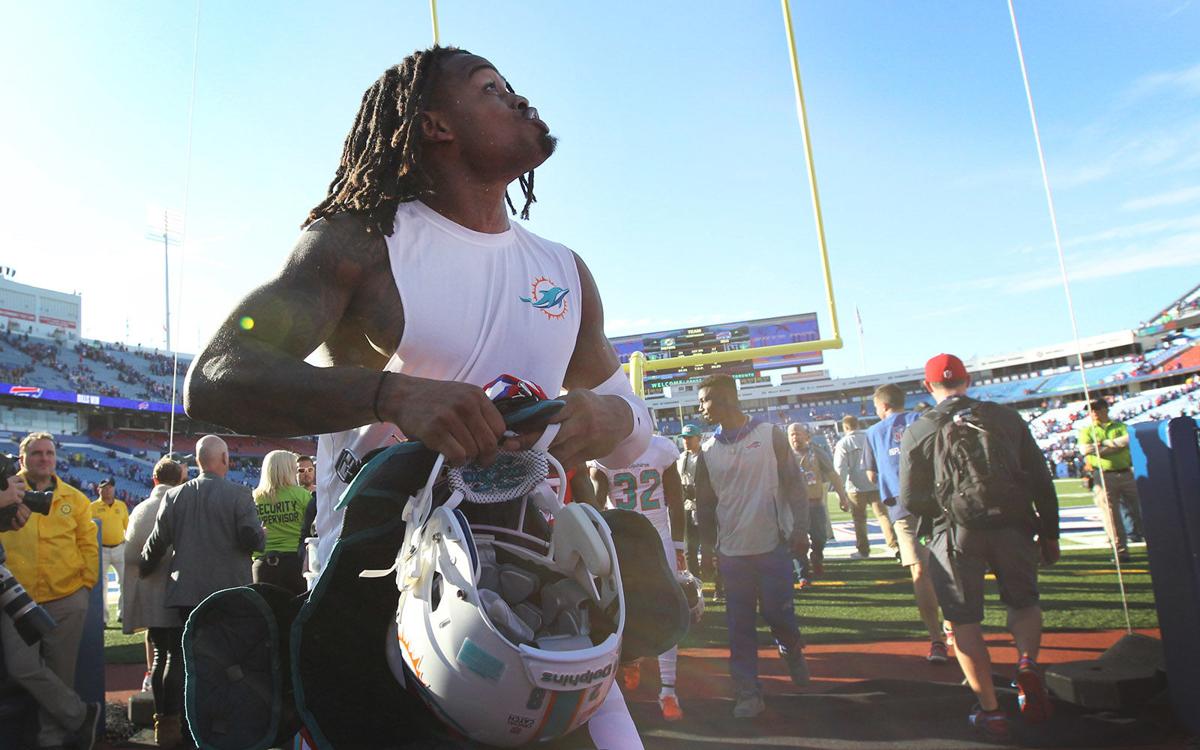 A fans yells to Miami Dolphins strong safety Bobby McCain after the said that he spit on him while walking up the tunnel at the end of the game at New Era Field in Orchard Park, NY on Sunday, Oct. 20, 2019. James P. McCoy/Buffalo News

The Miami Dolphins will discipline starting safety Bobby McCain for an altercation with a Buffalo Bills fan who said the player spit on him after the Bills' victory Sunday at New Era Field, Dolphins Coach Brian Flores said Monday.

“We’re going to discipline Bobby for that. We’ll handle that discipline internally,” Flores said at a news conference in Miami, according to an NFL transcript.

A Bills fan told The Buffalo News that McCain spit on him after Sunday's game, and fans said he also threatened to spit on a 13-year-old boy who was heckling him from the stands before the game started.

In brief comments to reporters later Monday, McCain did not offer specifics of the incident or take questions.

“I regret the incident that happened with me and the fan yesterday after the game," McCain said. "I wish I would’ve handled myself better. I spoke with Coach Flores today. We’re on the same page. We’re looking forward to Pittsburgh and going through preparation.”

The Erie County Sheriff's Office is aware of the incident and is following up with the Bills organization and the National Football League.

The Sheriff's Office was working Monday to talk further with the Bills and the NFL about the reported incident.

Dylan Wentland, 28, of West Seneca said he heard the boy shout, "You're irrelevant!" as the Miami players walked through the tunnel to the field for warmups. That's when McCain, 26, turned around and threatened to spit in the boy's face, Wentland said.

"He's the nicest kid in the world. He's sat behind us for years with his dad. He was just having a good time," said Wentland, a 15-year season ticket holder. "I go, 'Dude, what’s wrong with you? What kind of role model are you for the kid?' "

Wentland said he didn't interact with McCain any more during the game, but when the game ended and players left the field, McCain sought him out.

"I haven’t even said a word to him. He runs right up to me and spits in my face and then runs down the tunnel," Wentland said. "I mean literally wound up, hocked and just spit right in my face while I’m standing there."

He said sheriff's deputies tried to escort Wentland out of the area after the incident, but other fans came to his defense.

Scott Hammond of Mendon, the father of the 13-year-old boy, backed Wentland's account.

"McCain walked over and, like, faked spitting on him five or six times," Hammond said, referring to McCain's actions toward his son before the game. "He made the noise but nothing came out."

Hammond said McCain threatened to spit on the boy again while headed back through the tunnel after warmups, but another player kept McCain moving.

"It all started with a 13-year-old that told the Dolphins they were irrelevant," Hammond said. "There are far worse things that get said to players at the tunnel end zone."

The undersheriff said 140 deputies staff the Bills game to provide security, but no deputies witnessed the incident. Nevertheless, the Sheriff's Office is fully aware of Wentland's accusations and is committed to following up with the league.

The incident was not filed as a full police report because no deputy witnessed it, Wipperman said.

Instead, an abbreviated blue incident card was completed. This card, which is given to the Bills organization, is usually used for noncriminal incidents such as tobacco possession, excessive profanity not witnessed by a deputy, first aid and other minor incidents that result in stadium ejection, Wipperman said.

Wipperman has served as incident commander at the stadium since 2013. He cannot recall a prior incident where a player did more than verbally trash a fan. The Sheriff's Office will conduct some fact finding and meet with the Bills and NFL representatives to fully investigate the matter, he said.

McCain said before Sunday's game when a reporter asked him what it would be like to play in a "loud, raucous" place like Buffalo that fans in Buffalo are "wild," but it's all in good fun and "you can't let it get in your head."

"You just gotta put aside all distractions. Let them call you whatever they want to call you, talk about your mom. It's just ball though," he said.

Flores, the Dolphins coach, said Monday, “He and I had a pretty open dialogue. I heard his side of the story. It’s unfortunate. I feel like he needed to handle that situation better.”

The Bills organization said it had no comment. A spokesman for the NFL did not respond to a request for comment.

Watch now: Dion Dawkins talks about the performance of the offensive line

Watch now: Dion Dawkins talks about the performance of the offensive line

Bobby McCain interacts with a fan before Sunday's game. Wentland says the video shows the Dolphin's player threatening to spit on a young fan.…

A fan yells at Miami Dolphins safety Bobby McCain who was walking to the end zone tunnel at the end of the game at New Era Field on Sunday, Oct. 20, 2019. The fan said McCain had just spit at him. (James P. McCoy/Buffalo News)

A fans yells to Miami Dolphins strong safety Bobby McCain after the said that he spit on him while walking up the tunnel at the end of the game at New Era Field in Orchard Park, NY on Sunday, Oct. 20, 2019. James P. McCoy/Buffalo News