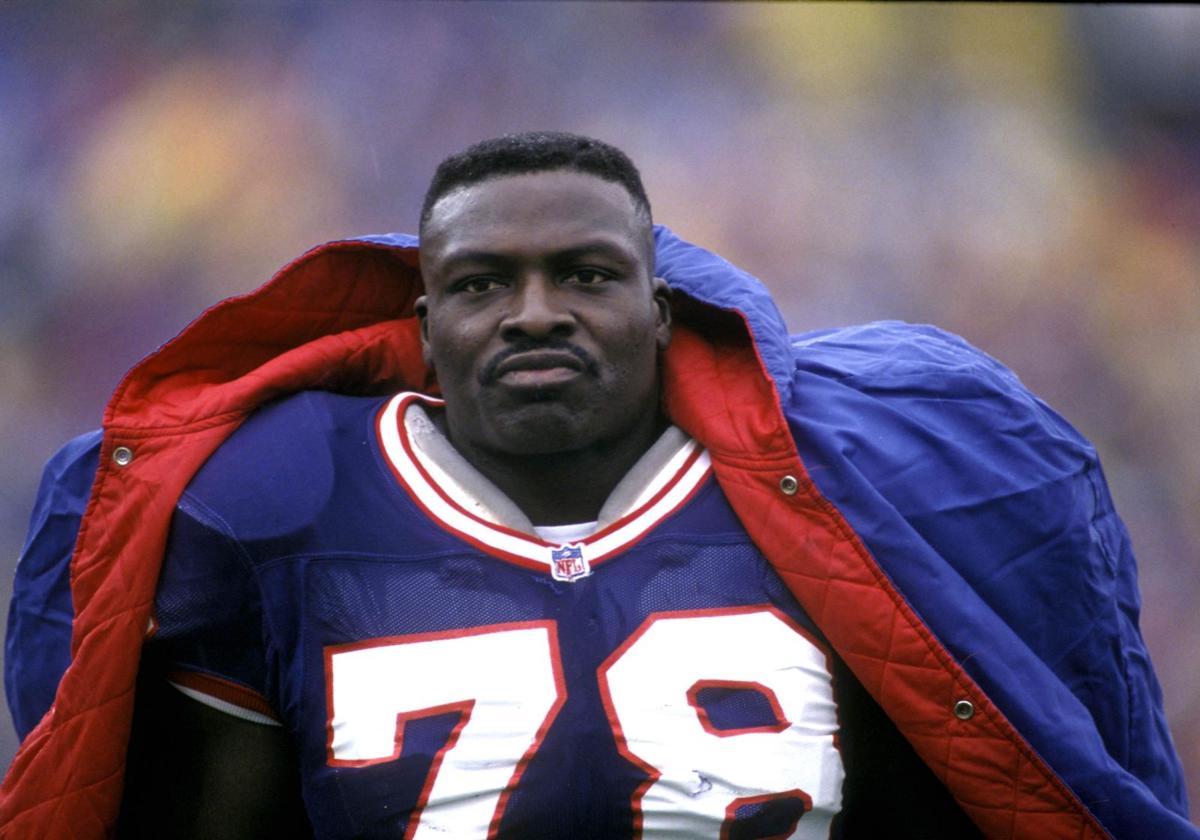 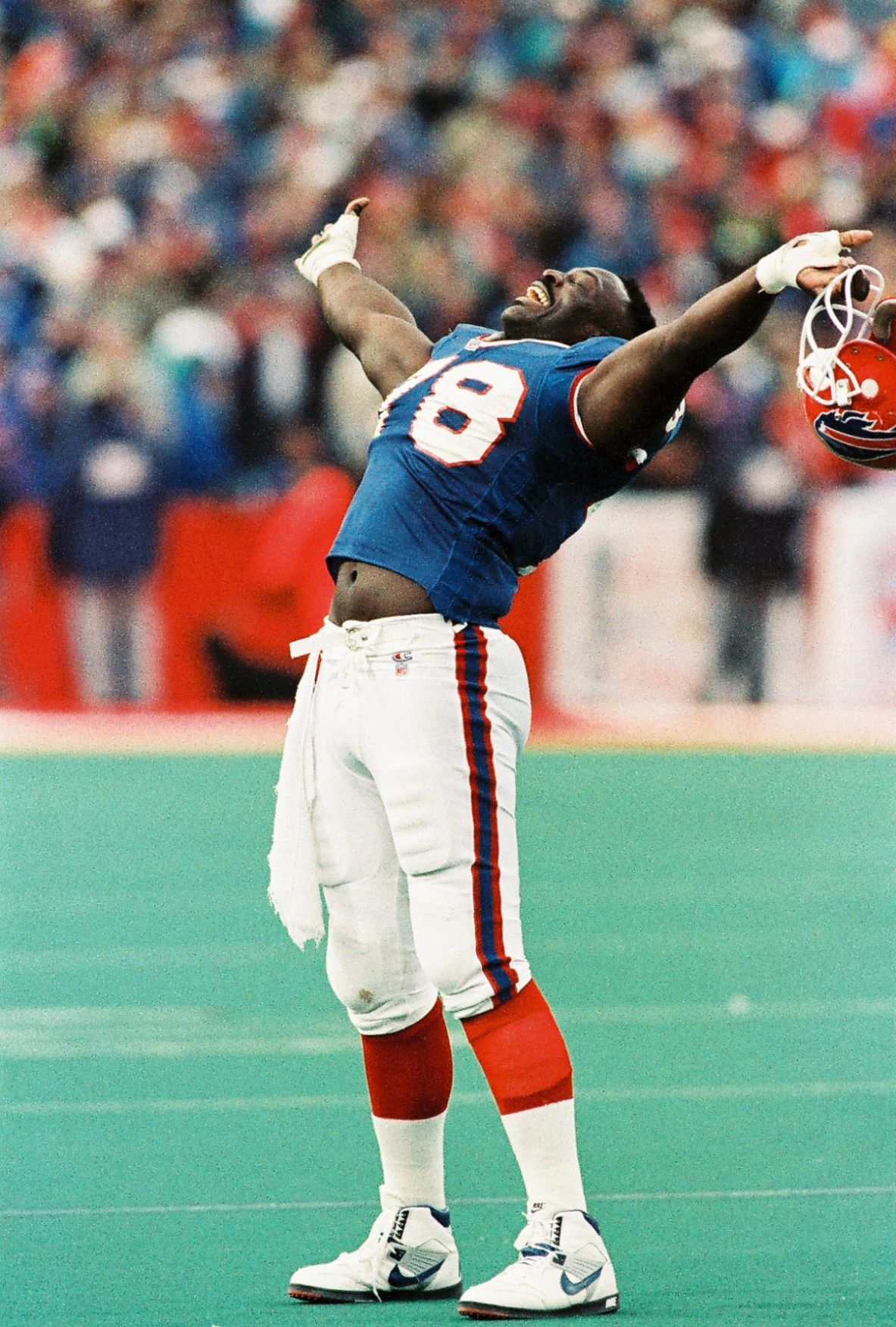 These photos are for Vince in graphics for a special section. Bruce Smith celebrates at the end of the AFC Championship on January 5,1991 at Rich Stadium in Orchard Park, (James P. McCoy/ Buffalo News) 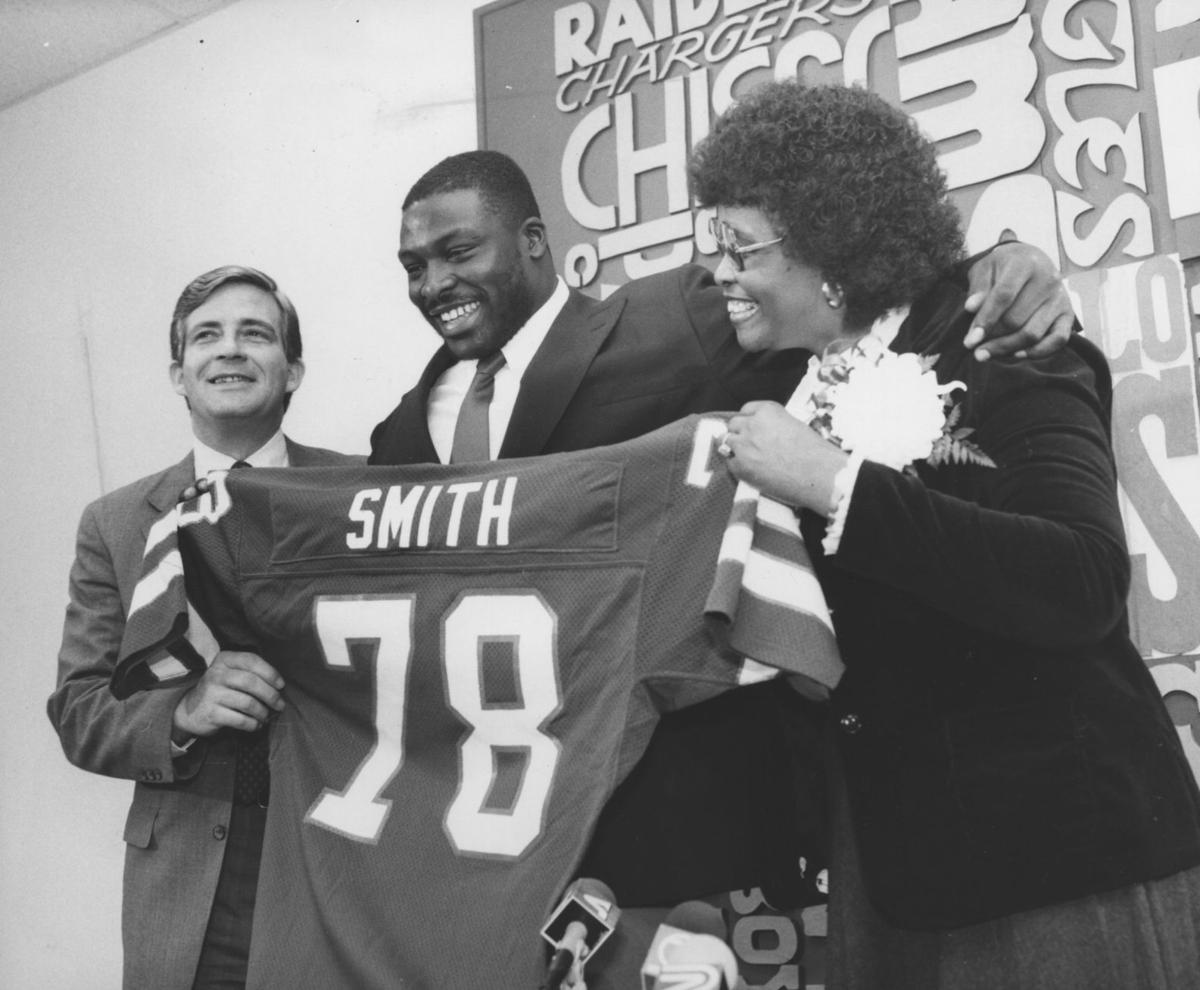 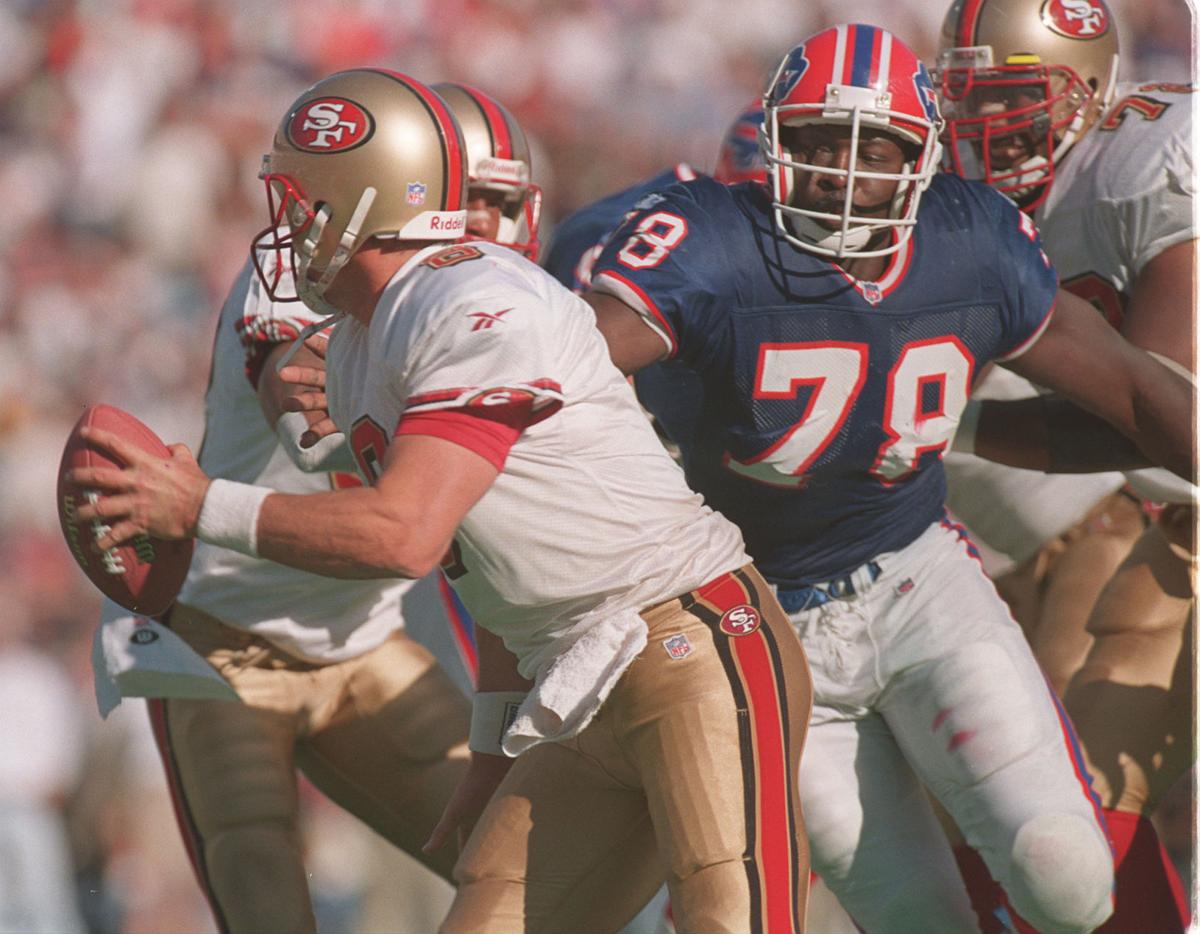 The documentary “Bruce Smith: A Football Life” that airs at 10 p.m. Friday on the NFL Network deserves a different title: “The Bruce Smith You Didn’t Know.”

Most Buffalo Bills fans in Western New York are aware of Smith’s spin moves that helped him become a sack machine during the team's Super Bowl years in the 1990s, accomplishments that are highlighted in the promos for the program.

They might also be curious where he will rank in the NFL’s top defensive linemen and linebackers in the program that airs before the documentary.

But this hourlong portrait of Smith – 44 minutes without commercials – includes details about the Norfolk, Va., native that even many ardent Bills fans might not know.

“It isn’t easy getting a handle on Bruce Smith,” says narrator Josh Charles (“The Good Wife,” “Sports Night") near the start of the program. “Perhaps that is because there is more than one of them.”

Then the program proceeds to show that Smith is a humanitarian, working with a program in 1999 called “Operation Smile” that fixes the mouths of children.

He also recently earned a human rights award for his work in Virginia, his home state.

His wife, Carmen, whom he met when he starred at Virginia Tech, was diagnosed with breast cancer a few years ago and her battle appears to have profoundly changed Smith and made him more spiritual.

He also doesn’t give Buffalo as much love as those players have, which may be an additional reason why he isn’t as beloved here.

It probably didn’t help that during the buildup in 1992 for one of the Super Bowls, Smith reprised the story that he received racist hate mail from bigots in Buffalo. (That isn’t in the documentary.)

“If Bruce Smith hits Redskins quarterback Mark Rypien as hard as he is landing on the people of Western New York, the Bills have the Super Bowl as good as won,” Buffalo News columnist Larry Felser wrote at the time.

This edition of “A Football Life,” which follows previous documentaries on Kelly and Thomas, may change how some feel about Smith. It gives people a better understanding of him in a way that could make him more popular here.

It shows Smith to be a complicated person who appears to have grown from being bullied as a kid into a man who does good deeds and is beloved by his teammates.

In one of the program's more poignant moments, Tasker tries to hold back tears as he explains Smith changed from a “fat little kid to an icon, Mount Rushmore, a leader of men, a guy you can get behind. Just a completely different human being.”

It is notable that Smith doesn’t say much, if anything, about Western New York in the hour beyond telling former WKBW sports reporter Bob Koshinski after being the league’s No.1 draft pick in 1985 that he looked forward to playing in Buffalo and “getting all the fan support.”

There is no obligatory Buffalove in the program. Perhaps that’s the fault of the program’s editors. But Smith never has had public relations in mind, as illustrated in his playing days by his lobbying for player of the year honors and bragging about his play.

The documentary does an excellent job showing his private life and how much he is loved by his Bills teammates. That is especially true of Kelly, who considers Smith to be a brother and tells him how much he appreciated all the time the defensive end spent talking to Kelly’s mother at postgame parties at the quarterback’s house.

Tasker provides the most quotable material because he is the most brutally honest. Early on, he describes Smith as “entitled” and “arrogant” (a word Smith disputes) and not easy to get along with when he arrived in Buffalo.

Tasker adds that Smith and Kelly didn’t like each other initially before they talked it out.

A testament to Smith’s growth as a teammate comes courtesy of Scott Norwood in a 2014 interview in which he explained that Smith knocked on his hotel door after he missed the infamous kick in Super Bowl XXV, told him “it wasn’t you Scotty” and gave him the “greatest hug.”

“It meant a lot to me,” said Norwood.

Smith’s love from his teammates is illustrated when they gather at Chef’s restaurant for a meal served with nostalgia and laughs.

Sure, there are old clips of legendary quarterbacks Steve Young, Dan Marino, Boomer Esiason and John Elway looking young when they amusingly describe the fear of playing against Smith back in the day.

But it is the private moments that make this hour special.

It starts with the memorable Nike commercial featuring a young Dennis Hopper holding Smith’s shoes and saying the tag line that the defensive end became known for – "Bad Things.”

It includes an unintentional commercial for the Stairmaster, with former Bills strength coach Rusty Jones saying Smith made the equipment rust from the sweat that came off him as he molded his body from the fat draft choice who arrived in Buffalo. Fittingly, the Smith of today is shown often working on the Stairmaster at home to stay fit.

To its credit, the documentary doesn’t shy away from some of Smith’s warts, noting he was out of shape as a rookie and was suspended for four games in 1988 for violating the league’s substance abuse policy.

And there is acknowledgement the team loaded with huge egos became known as the Bickering Bills.

But overall, Western New Yorkers may come away from this hour with as much appreciation for Smith the human being as Smith a player who Kelly considers the GOAT (greatest of all time) in his position.

When it comes to “A Football Life” documentaries, good things happen. And because it shows so much about Smith that even his biggest fans might not know, this one is really good.

Bruce Smith on Josh Allen, the playoffs and his 'cheat sheet' for the Bills

Plenty of theories have been floated about Bills quarterback Josh Allen's performance through the first two weeks, and former WFT tight end Logan Laulsen a hot take that might be better than much of what's been said.

A.J. Epenesa had the best game of his Bills career. He had three hits on the quarterback, including the one that knocked Tua Tagovailoa out of the game, and three other pressures.

These photos are for Vince in graphics for a special section. Bruce Smith celebrates at the end of the AFC Championship on January 5,1991 at Rich Stadium in Orchard Park, (James P. McCoy/ Buffalo News)