The Buffalo Bills didn’t reach out to Lorenzo Alexander in the immediate aftermath of their 27-17 season-opening victory against the New York Jets, in which starting linebackers Tremaine Edmunds and Matt Milano were lost to injuries.

And Alexander, the venerable veteran linebacker who retired after last season, wasn’t expecting to hear from them either.

“Nah, unless it’s serious ... ” Alexander texted after the game. “But if they do, it won’t be until they have a better understanding of how long the recovery will be.”

This is the point where Bills Mafia should cross its fingers and its toes.

Edmunds and Milano are among the most irreplaceable players on Buffalo’s formidable defense, and depending on the severity of their injuries, the Bills might have to replace them after Week 1.

Edmunds, the middle linebacker and budding star, was lost to a right shoulder injury in the third quarter after attempting to tackle Jamison Crowder, who took a short pass from Sam Darnold 69 yards for a touchdown to cut the Bills’ lead to 21-10 with about five minutes remaining in the frame.

Edmunds was examined in the sideline medical tent, then headed to the locker room in the fourth quarter without his jersey. He did not return to the game, though he eventually returned to the sideline, and did not have his arm in a sling.

Milano, the weakside linebacker with outstanding coverage abilities, snared an interception in the second quarter but left the game with a hamstring injury late in the first half.

Milano, who has a history of hamstring issues, doesn’t have a backup listed on the roster. Given the nature of the ailment, his absence could be felt for several games to come.

“We'll see what happens this week,” Bills coach Sean McDermott said during his postgame press conference, before meeting with the team’s medical staff. “We hope and pray we get them back. If we don't, then it'll be next man up.”

Backup linebackers A.J. Klein and Tyrel Dodson received significant snaps and performed admirably after Edmunds and Milano were knocked from the game.

Klein, the former Carolina Panthers fifth-round pick and New Orleans Saints linebacker who signed with the Bills this offseason, tied for the team lead with five tackles.

Dodson, an undrafted second-year pro who spent much of last season on the practice squad after a six-game suspension for a domestic violence incident, had four tackles and a sack before an undisclosed but apparently minor injury late in the game, when he remained down for several seconds before popping up and running off the field.

Since undrafted second-year reserve Del'Shawn Phillips was lost to a quadriceps injury earlier in the game, Dodson’s injury left the Bills with just two healthy linebackers on the active roster – Klein and Tyler Matakevich, who had played mostly special teams in his four years with the Pittsburgh Steelers.

“I was very proud of the way the younger guys stepped in and did a good job, from Tyrel Dodson to A.J. Klein to Tyler Matakevich,” McDermott said. “That’s the ‘next man up,’ and that’s the resiliency of the linebacking crew, the resilience of our defense and of our team. There’s going to be adversity like there was today, whether it was injuries or a change of momentum. And I think we've learned that we've got to continue to push through and I thought our team did that today.”

Crowder’s touchdown was one of the few explosive plays allowed by the Bills’ defense.

Dodson flattened Darnold for a sack on the Jets’ next possession, which ended with Jordan Poyer stripping the ball from Chris Herndon and Jerry Hughes hopping on the fumble at the Jets 38.

Safety Micah Hyde said the Bills practiced with backups interspersed with starters throughout training camp to prepare for the possibility that players could miss time were they to test positive for Covid-19, and that helped against the Jets.

“The coaches did a good job at practice at preparing us,” Hyde said. “Some plays I'd be out, you know, it's next guy coming in. Some plays (Poyer) would be out. It's getting us used to working with different guys and not necessarily starters, but just different guys down the roster. I think that was a big thing that helped us today. You know, the linebackers stepped in, were able to make plays for us. Obviously we want our starting linebackers, but we didn't skip a beat once we got out there, because the coaches prepare us well.”

On a day when Josh Allen, surrounded by weapons, looked like his old self – a force of nature but too careless with the ball, losing two fumbles – and rookie Tyler Bass missed two of three field goals, the defensive dominance was the most encouraging sign for the Bills’ hopes of sustained success this season, with one major caveat: The Jets stink like the dumpster behind a seafood shack.

The Bills raced to a 21-0 lead, with only Allen’s fumbles stopping the offense, as the defense held the Jets without a first down until their fourth possession.

And although the offense failed to put the game away, the defense made sure the outcome was never in doubt.

Sam Darnold completed 21 of 35 pass attempts for 215 yards, a touchdown and a pick, and the Jets' rushing attack was limited to just 52 yards and a late score on 15 carries, despite Bills defensive tackle Star Lotulelei opting out of the season because of Covid-19 concerns.

The Bills had time to adjust to his absence. But the potential absence of Edmunds and Milano could loom large in the weeks to come, beginning with next week’s trip to Miami.

The Dolphins' running game was largely held in check by the New England Patriots on Sunday, but the trio of Matt Breida, Jordan Howard and Myles Gaskin, at least on paper, certainly seems capable of posing a challenge. And Dolphins tight end Mike Gesicki could have a field day without Milano in coverage.

General Manager Brandon Beane might add depth by elevating Andre Smith from the practice squad, and he might consider picking up the phone to call an old friend.

Would Alexander consider returning to the NFL, should the Bills inquire about his availability?

Allen in all alone

Allen out of bounds

Knox up the middle

Darnold in the pocket

Allen on the run

Brown into the end zone

Brown brings it in

Dancing in the end zone

Singletary up the middle

Bass on the board

Davis up the sideline

Jets too little too late

Sam Darnold throws it up

Win for the books

Jason Wolf is a 15-time recipient of the Associated Press Sports Editors national top-10 writing award. His work also has been honored by the Society for Features Journalism and cited in The Best American Sports Writing anthology.

Both teams collectively decided to stay inside their locker rooms, according to CBS sideline reporter AJ Ross.

Murphy started at left defensive end against the New York Jets, playing 25 snaps in a 27-17 win at Bills Stadium. It’s the spot that was the source of much speculation during training camp.

Observations: Where is everybody? No Bills fans make for unique atmosphere

It didn’t take long for the Bills to get their rookies involved on offense.

Quarter by quarter: Bills dominated more than the score indicated

Mark Gaughan breaks down Bills vs. Jets, quarter by quarter.

See photos of an empty Bills Stadium and the parking lots and streets surrounding it due to the coronavirus pandemic, as the Buffalo Bills fac…

Here’s a look at some of the key plays in the game for the wideouts. 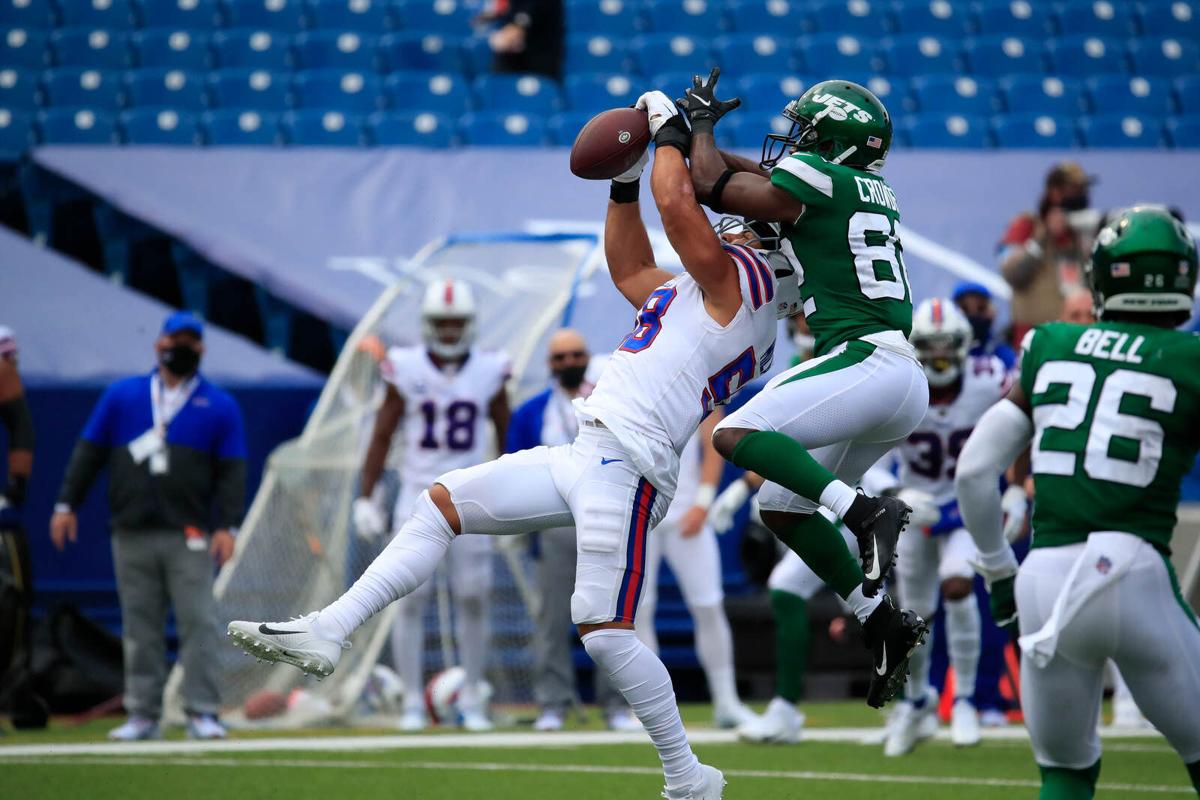 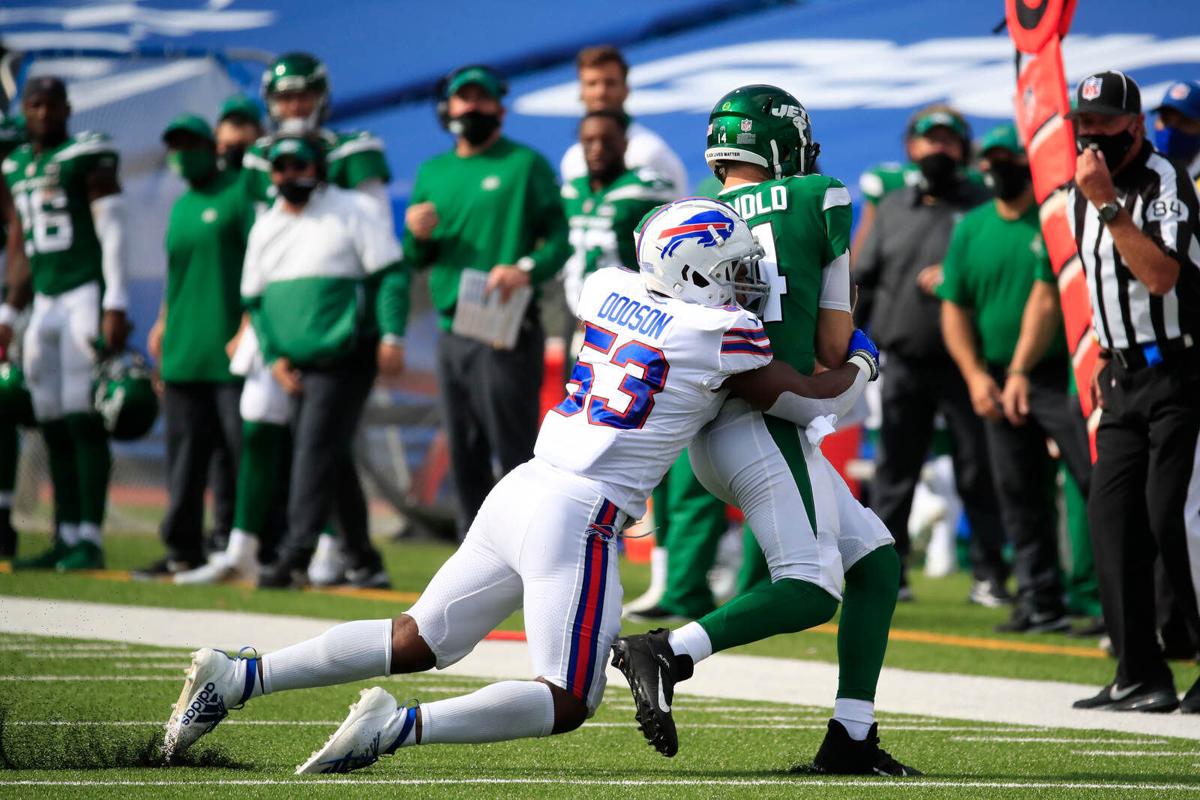