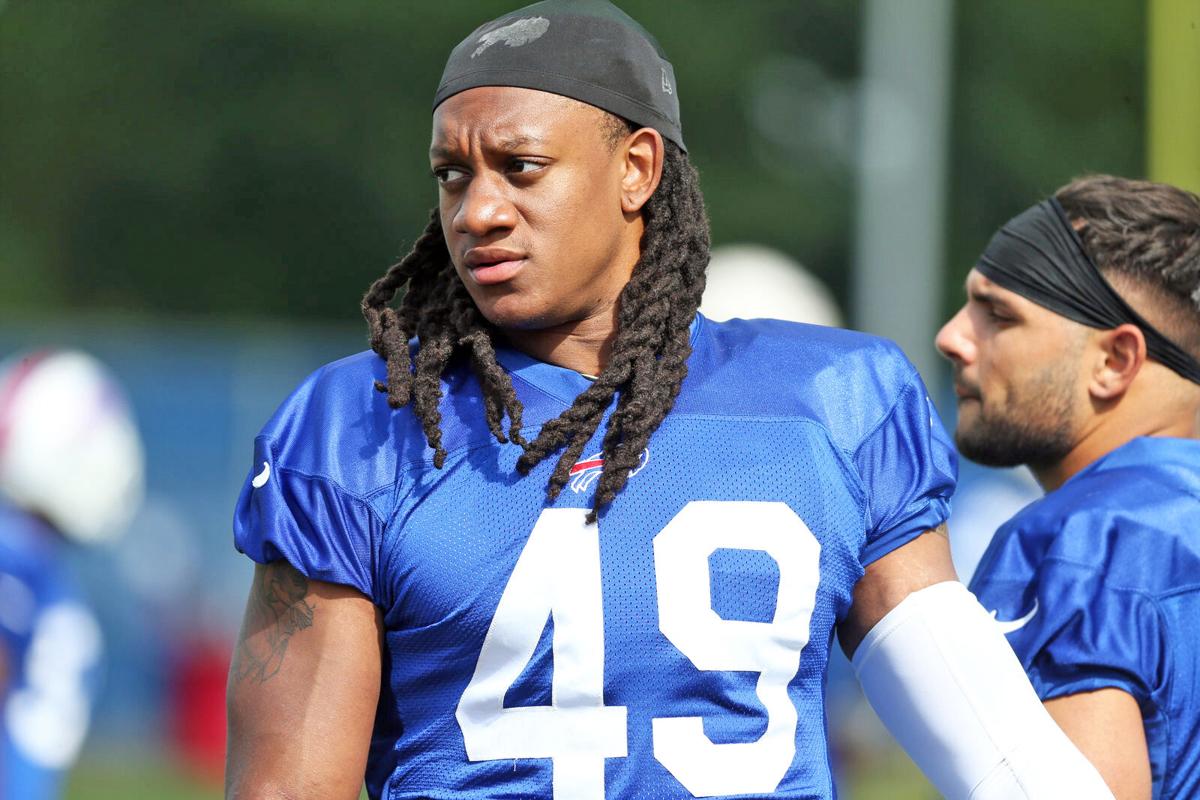 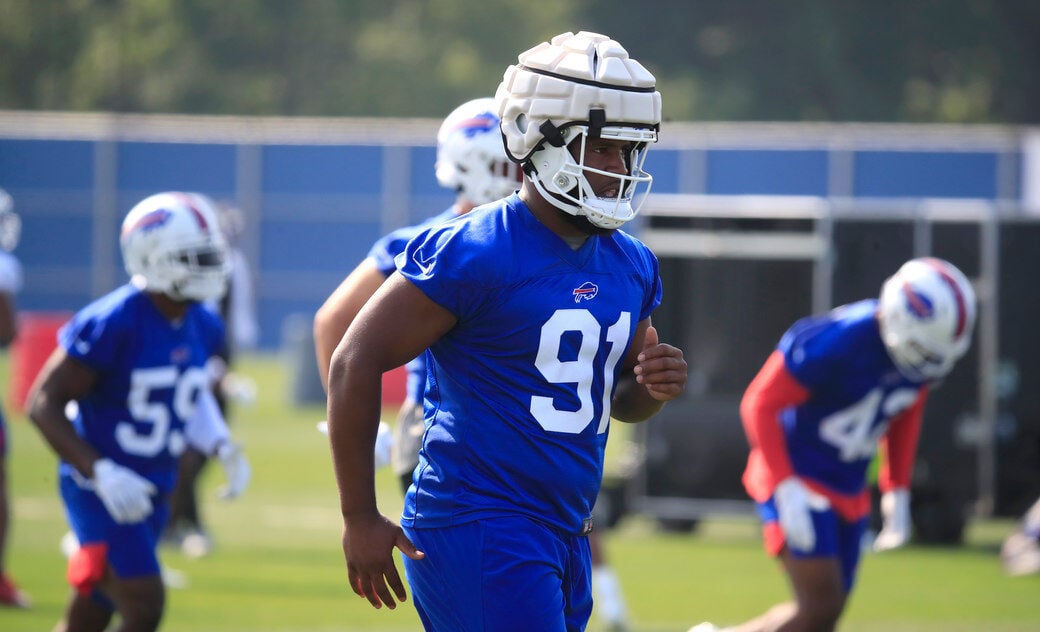 Tremaine Edmunds and Ed Oliver are poised for breakout seasons.

And the Bills expect more game-changing plays out of their 2018 and ’19 first-round draft picks, defensive cornerstones who must raise their game for Buffalo to emerge from the AFC and win the Super Bowl.

'You feel the energy': Thousands of Buffalo Bills fans on hand for training camp

On Saturday, fans were welcomed back to Highmark Stadium at their largest capacity since December of 2019.

“Yeah. I’m sure if you were to ask them that question, that’s exactly what they would want to answer. ‘Yes. I need to make more game-changing plays,’ ” defensive coordinator Leslie Frazier said. “Tremaine would say that and so would Ed. That’s something we’ve talked to them about. We need that, not only from those two guys, but there are some other guys, as well.

“We expect with their ability and the fact that they are two premier players for us on defense, we need those impact plays, those splash plays. And they’re capable. Ed’s done it for us in the past. Tremaine can do it. So yes, that would be the next step in their development, to be able to create those splash plays on a consistent basis.”

There are reasons to believe this is the year Edmunds and Oliver live up to the lofty expectations of their draft status.

Running backs Devin Singletary and Zack Moss split reps with the starters in front of the announced crowd of 15,000 fans.

First, the return of nose tackle Star Lotulelei, who opted out last season because of the Covid-19 pandemic, allows Oliver to return to playing more three technique, where the defensive tackle will face fewer double teams and have a greater opportunity to rush the passer, rather than absorbing blocks.

Lotulelei’s ability to take on multiple offensive linemen likewise changes the game for Edmunds, freeing him to make more plays on the ball carrier behind the line of scrimmage.

“Man, I’m glad to have him back,” Edmunds said. “Star’s a dog, man. Anytime you’ve got somebody like that playing in front of you, it’s always going to be good. He’s a guy that he lets his work speak for itself. He may not say too much stuff, but he lets his presence be known. Star, he’s just going to go to work. And I know I can count on him.”

Second, the continuity on defense with every starter and coach returning gives the Bills an advantage over their competition in terms of experience.

Not only does the familiarity with terminology, teammates and the playbook imbue confidence, but the group was able to hit the ground running the first week of training camp.

Once undrafted, fourth-year cornerback Levi Wallace is focused on helping his teammates improve as he competes.

“I really like the fact that we have the number of returners that we do,” Frazier said. “Myself and some of the coaches were talking about it this morning and yesterday, as well. The communication by our players and the communication between the coaches and players, it’s almost seamless at this time of the year compared to in years past, and especially last year and even the year before.”

The 6-foot-1, 287-pound Oliver, drafted ninth overall out of Houston in 2019, said it’s been difficult being patient for big plays to come in the pros after dominating in college.

Oliver, 23, had a breakout performance during his rookie season in a 26-15 victory against the Dallas Cowboys on Thanksgiving, racking up two sacks, a forced fumble that led to the Bills’ go-ahead touchdown, a pass breakup and four tackles.

But he’s had just three sacks and one forced fumble in 20 games since.

“It’s tough. It’s different. And there was a learning curve and I’m still in the learning curve,” Oliver said about making the transition from college to the pros, “but this is my first year coming into camp healthy and being able to be with the guys and build that rush during camp. Last year, I was coming off a groin injury, so it’s kind of like limited time, sporadic time. And I just had to mind me. But this year is going to be the first year like we’re actually, from the ground, zero all the way up, we’re building that rush. Not me coming in halfway through camp.”

The 6-foot-5, 250-pound Edmunds, drafted 16th overall out of Virginia Tech in 2018, is entering his fourth pro season and is only 23 years old, younger than some of the Bills’ rookies.

He’s already been named to two Pro Bowls after racking up more than 100 tackles in each of his first three seasons. But in 46 career games, he’s managed just 5 1/2 sacks, 19 tackles for loss, three interceptions, two forced fumbles and no fumble recoveries.

Buffalo picked up the fifth-year option on Edmunds’ rookie contract for $12.7 million in May after he finished last season with 119 tackles in 15 games. He had just two sacks, four tackles for loss and no turnovers.

Edmunds suffered a shoulder injury in the season opener, missed the following week’s game and never quite returned to full health as the season progressed. But he wouldn’t say the injury hindered his play.

“That obviously lasted a little bit longer than I wanted it to,” Edmunds said. “I don’t know exactly what point it was (when I felt better) but I tried to just tune it out the best way that I can. We play a sport you’ve got to deal with those type of things. I didn’t make an excuse for it one time and I’m not going to make an excuse for it now. I learned from it. I grew better as a person, just as far as dealing with injuries and playing with them, so I’m looking forward and I’m excited to what this year has to offer.”

He’s not alone in that regard.

Edmunds and Oliver are keys to unlocking the Bills’ vast potential and the team realizing its championship aspirations.

Observations: With Stefon Diggs back, passing attack heats up on Day 5 of training camp

Josh Allen and Stefon Diggs had their usual chemistry, but the play of the day was turned in by second-year receiver Isaiah Hodgins, who got behind the defense early in practice to haul in a bomb from backup quarterback Mitchell Trubisky.

Devin Singletary, Zack Moss unconcerned with who will start at running back for Bills

The Bills were 20th in rushing last season, and now have to navigate what their 2021 run game will look like.

Last season, the Bills used eight different starters on the offensive line, which ranked as 19th most, made seven line changes (tied for 17th most) and went five straight weeks with the same five-man unit (tied for seventh longest).