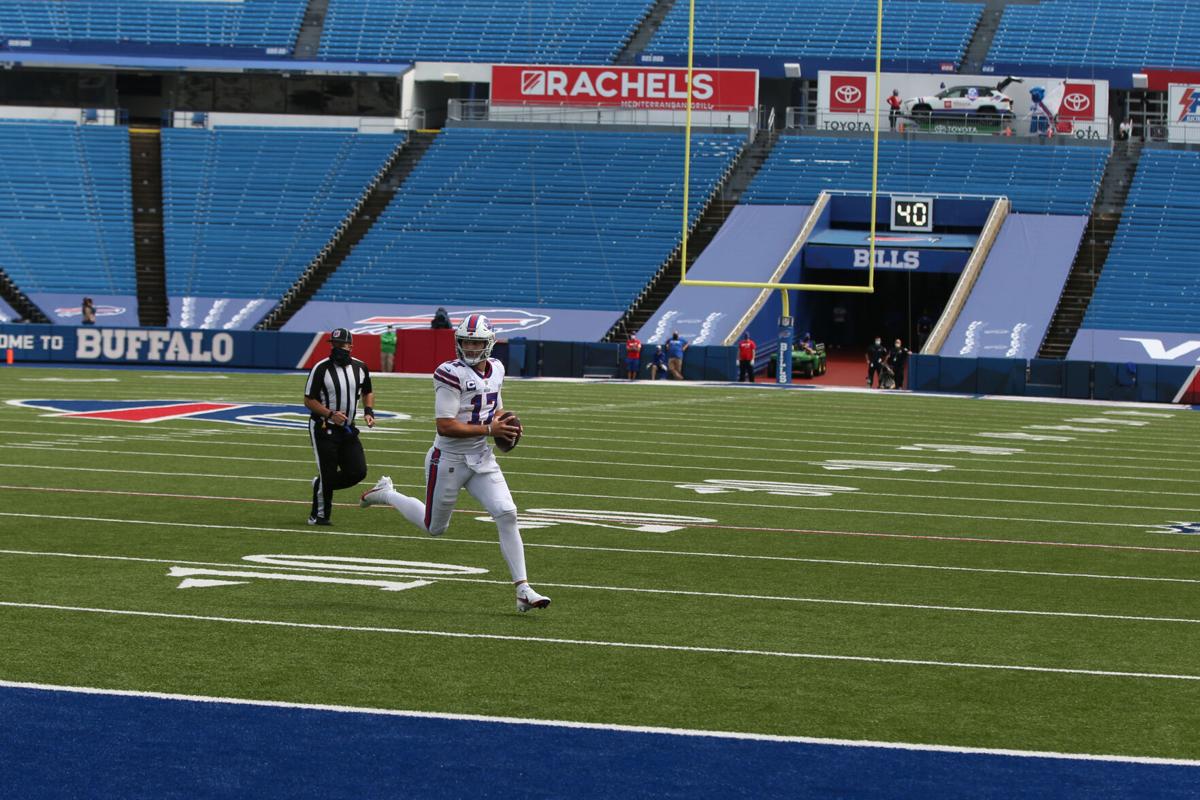 Buffalo Bills quarterback Josh Allen (17) rushes for a 2-yard touchdown with no fans in the stands to celebrate. 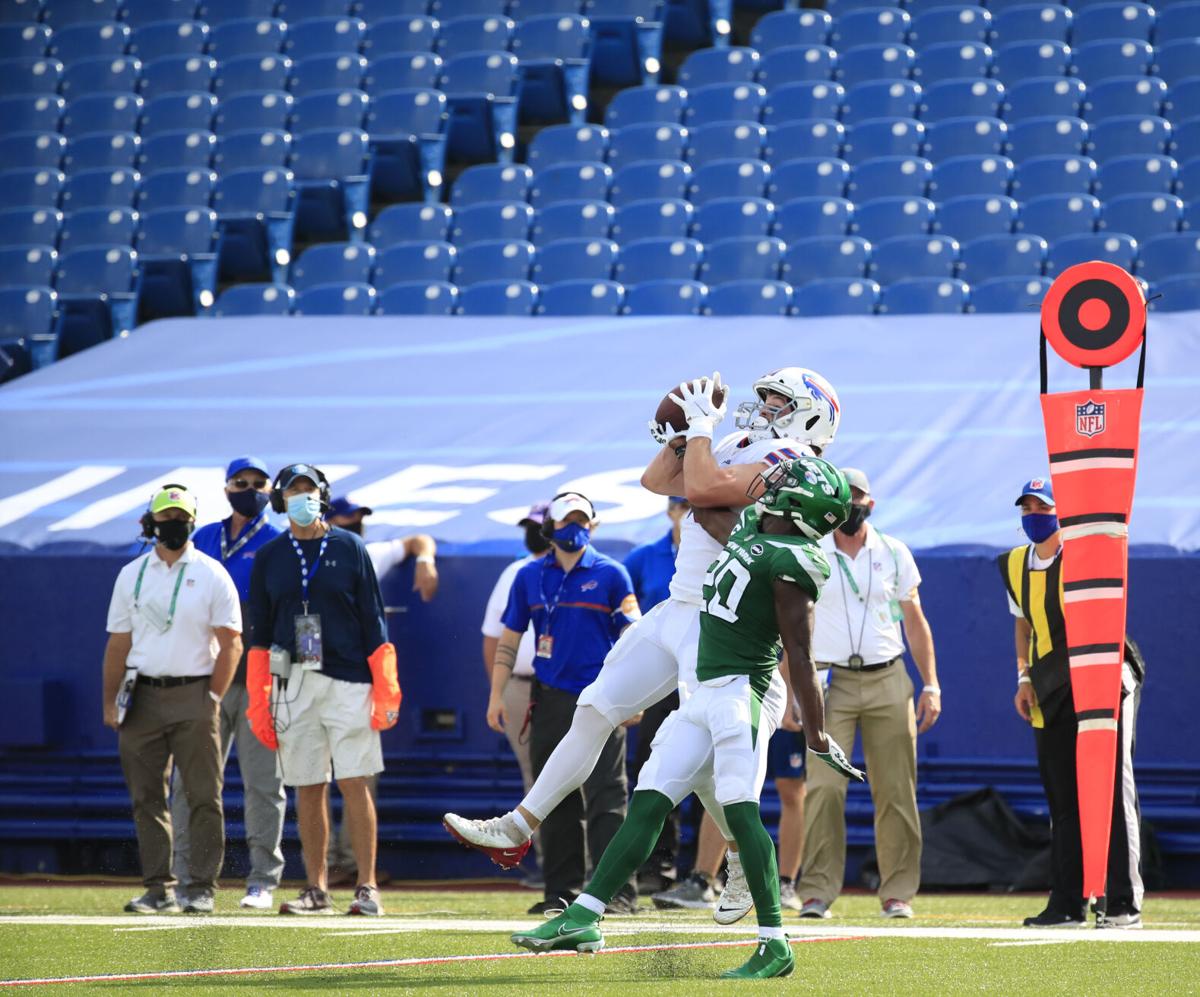 When the Buffalo Bills season opener began Sunday, several local media members went on social media to describe the sound of silence without fans inside Bills Stadium as a “weird” situation.

When the New York Jets prepared to score a meaningless touchdown in the final minute, CBS’ play-by-play man Andrew Catalon described Buffalo’s eventual 27-17 victory as a “weird game” because the Bills dominated so much and yet the Jets were sort of hanging in.

“Weird” was the word of the day.

However, the telecast didn’t seem so weird watching from home. Overall, the telecast was a reasonable facsimile of how a game looks and sounds when fans are there.

The piped-in sound – which Catalon jokingly and repeatedly referred to as coming from "fake fans" – made the game feel oddly normal by NFL viewing standards.

The one major thing missing from a normal telecast was all those shots of crazy Bills fans in the stands.

But in keeping with the word of the day, there were some super “weird” game moments.

I could hear Buffalo fans across Western New York shout when the picture was lost before the first Bills touchdown of the season, a run by quarterback Josh Allen. I missed it because the picture went out at my house. Cable, satellite and Fios subscribers reported on Twitter they lost the picture, too.

I finally saw Allen’s run when CBS repeated the play at halftime.

Don’t blame Spectrum and the other providers for a change.

According to a CBS spokesperson, the network had a technical issue that lasted a few seconds. It lasted longer than that at my house. I had to reboot my cable box to get back WIVB-TV, the local CBS affiliate that carried the game.

Some of the analysis of former Bills receiver James Lofton was a little weird, too. But over the years, Lofton has shown that he can be weirdly entertaining and say some strange stuff.

With the Bills holding a 24-10 lead in the final four minutes and having a fourth down and a yard to go at the Jets goal line, Lofton suggested that Bills coach Sean McDermott would go for it to reward the Bills offensive line.

McDermott chose to have rookie Tyler Bass kick the field goal that gave the Bills a 27-10 lead.

“As soon as I say that, we’re going for a field goal,” said Lofton before quickly realizing that comment suggested he was rooting for his old team.

“By ‘we,’ I just mean offensively,” he said. It wasn’t much of a recovery.

The decision was a no-brainer for McDermott. If he had followed Lofton’s advice and the Bills failed to score on fourth down, the Jets would have had a shot – though a long shot – of tying the game with two touchdowns.

Bass’ field goal just about guaranteed a Bills victory since it gave them a three-score lead with less than four minutes to go.

It also was weird that it took CBS eight minutes to show a replay that appeared to show Bass’ first field goal attempt was good even though it was called wide right because it drifted in the wind after passing the goal post. It would have made the score 24-3.

Gene Steratore, CBS’ officiating expert, thought it “sure does” look good before the wind took it. “If the football is above the upright, it is not a reviewable play,” he added. I wish he had explained better what appears to be a bad rule.

Steratore also was called in after the Bills’ Jordan Poyer forced a fumble by Chris Herndon that was recovered by the Bills’ Jerry Hughes after the Jets receiver appeared to make a catch and made a move before fumbling.

Steratore said he would have stayed with the fumble call as it appeared the call was being reversed. Then, weirdly, the apparent reversal was reversed, the play stood, and the Bills got the ball.

He was making the universal suggestion that 2020 has been a year like no other.

Catalon, who in normal years works Bills preseason games and remains a close friend of Steve Tasker, had a decent game. He knows the Bills as well as any network play-by-play announcer. It showed when he noted how important the injury to Bills linebacker Matt Milano was.

He was a little late on some calls – notably identifying Zach Moss as the recipient of the touchdown that gave the Bills a 14-0 lead. But he has a good excitement level and sense of humor. Perhaps his lateness on some calls was due to the difficulties of communicating with a spotter under Covid-19 rules.

Now on to some more highs and lows of the broadcast:

Line of the Day: After McDermott went for it on a different fourth down near midfield with a 14-0 lead, Lofton said since the Bills don’t have “a tried and true” fullback to lead a run it was a “questionable” call. Hearing the piped-in sound noise, Catalon cracked “the fake fans love it, I heard them clapping in my ear.” Fans always love it when coaches gamble and go for it. Allen got the first down on a drive that ended with a 21-0 Bills lead.

“The Voice”: Sideline reporter A.J. Ross has a terrific voice but didn’t need to use it too often. Because of Covid-19 precautions, she had to interview McDermott and Jets coach Adam Gase at halftime by telephone.

“D Washington”: That was the audible called by Allen before his touchdown to John Brown that gave the Bills a 21-0 lead. Fans at home could hear more clearly than usual because of the lack of fans at the game. Lofton didn’t mention Allen audibled, which was a sign of the quarterback’s progress seeing defenses at the line of scrimmage.

The Hits Keep on Coming: After several designed Allen runs early in the game, Lofton spoke for Bills fans when he said he wouldn’t like his quarterback being hit so often in the first quarter.

The Vacuum Cleaner: Catalon tried to downplay the volume of artificial noise in the stadium as saying it is similar to that made by a vacuum cleaner. “My vacuum cleaner makes a lot of noise,” said Lofton.

The 300 Game: Catalon spent a considerable amount of time saying how long it had been since a Bills quarterback had thrown for 300 yards. You might have thought he would have been more excited after Allen passed that mark with a long completion. However, a CBS graphic noted the achievement before Catalon talked about it.

Loftonisms: The analyst likes to compare players to those of today and of yesterday. After one Allen play in which the quarterback nimbly tiptoed down the sideline for a first down, Lofton said it was “almost like (Allen) turned into (Seattle) quarterback Russell Wilson. … A little guy who moves up the field.” When it took Bills receiver Stefon Diggs a little bit to get up after a big hit following a reception, Lofton said it reminded him of Jim Brown’s tendency to look hurt and then pop up for the next play. All the old-timers watching had to love that reference.

Second Guess: After Allen’s second fumble on a run near the end of the first half as the Bills appeared to be driving for a 24-0 or 28-0 lead, Catalon turned analyst and channeled what many Bills fans were thinking: “It is really easy to second guess that call. Up 21-0 and driving, why not protect the quarterback?”

Dart Shots that Hit the Mark: On a 29-yard completion from Allen to Cole Beasley, Lofton remarked Beasley might have scored with a better throw. When Allen missed a wide-open Brown in the end zone, Lofton noted the quarterback “didn’t get his hips forward enough” and that caused the ball to be badly overthrown. He also jokingly added that Catalon knew from playing darts at Syracuse University that Allen needed to throw “a dart in there.”

The Mask: While the announcers were questioning if a Jet had grabbed the face mask of a Bills back, they missed that the penalty actually went against Bills center Mitch Morse for holding.

Frantic Thoughts: CBS studio analysts Nate Burleson and Phil Simms both noted at halftime that Allen didn’t seem as “frantic” as he has been in seasons past. The quarterback’s fumbles certainly made some Bills fans a little frantic.

The Stache: For comedy relief, Catalon talked about Allen’s mustache. “He’s not proud of it,” said Catalon, adding the quarterback probably will shave it off. Fake fans and real fans alike will applaud that decision.

Milano was injured late in the first half against the New York Jets.

Buffalo Bills quarterback Josh Allen (17) rushes for a 2-yard touchdown with no fans in the stands to celebrate. 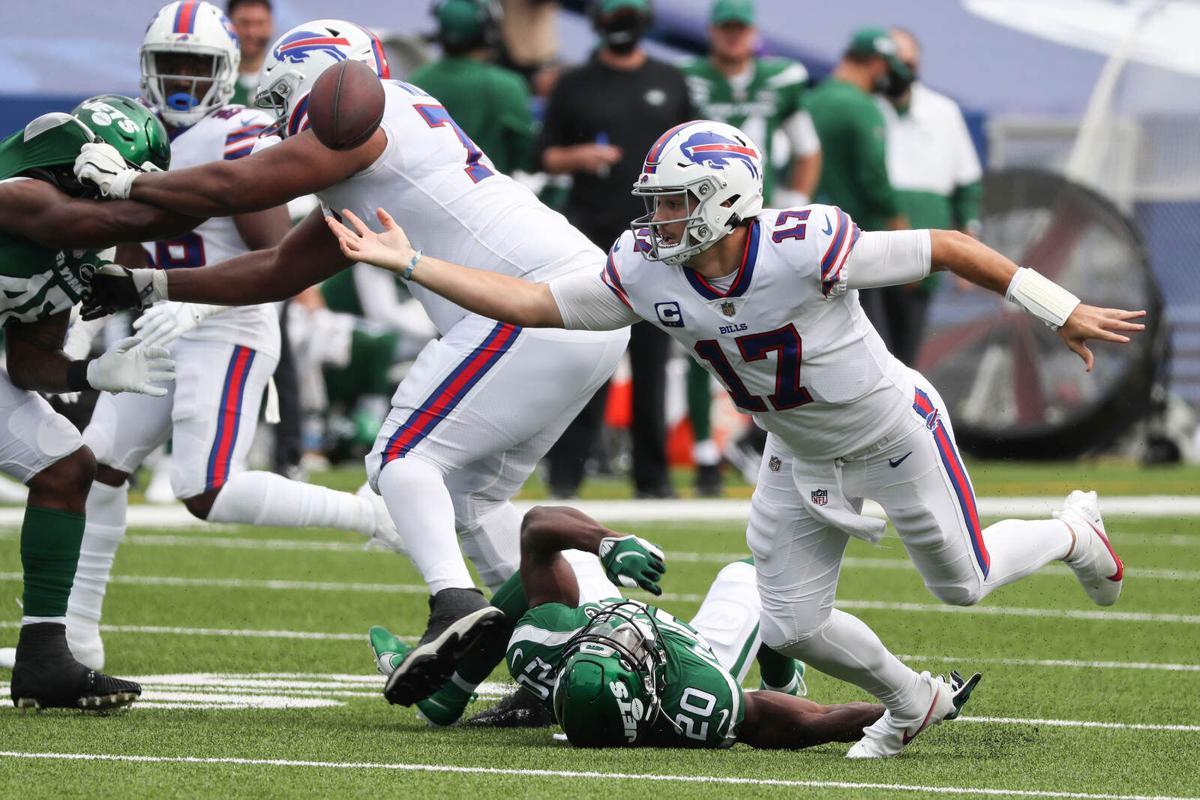 Buffalo Bills quarterback Josh Allen (17) fumbles the ball for a turnover as he is hit by New York Jets free safety Marcus Maye (20) in the first quarter.