In a swift and stunning fall from grace, Major League Baseball placed Hall of Famer Roberto Alomar on the ineligible list Friday and the Toronto Blue Jays have announced they are immediately severing ties with the infielder generally considered the greatest player in franchise history. The decisions come in the wake of an allegation of sexual misconduct against Alomar.

Alomar’s contract as a consultant to MLB in his native Puerto Rico was terminated and he can no longer work on the game's competition committee. He had spent several years as a special assistant for the Blue Jays, but those "ambassador" jobs were restructured last fall in the wake of the pandemic. TSN reported the complainant is believed to be preparing a lawsuit against Alomar, the Blue Jays and MLB.

The Jays announced Friday they would be removing Alomar, 53, from their "Level of Excellence" that honors franchise greats in Rogers Centre and taking down his retired No. 12 banner in center field at the stadium that honors his time in Toronto and his induction into the Hall of Fame in 2011.

The announcement ostensibly means Alomar's No. 12 will also come down at Sahlen Field, where it was affixed on the club level along with the numbers of Roy Halladay (32) and Jackie Robinson (42) on the front of the press box when the Blue Jays played their games here last summer.

The Bisons had no comment and referred all inquiries to the Blue Jays. The parent club is expected to play games here for a second season starting in June.

Alomar has made several trips to Sahlen Field representing the parent club. He was on hand for the 2012 news conference that initially announced the Bisons' affiliation agreement with Toronto and was among a group of Jays' officials that made the trip for the 2013 season opener that started the new affiliation. Alomar came back in 2016 to throw the ceremonial first pitch prior to the home opener.

Details on Alomar's situation are limited. A statement by Commissioner Rob Manfred said the sexual misconduct allegation was reported earlier this year by a baseball industry employee and dates to 2014.

"Having reviewed all of the available evidence from the now completed investigation, I have concluded that Mr. Alomar violated MLB’s policies, and that termination of his consultant contract and placement on MLB’s Ineligible List are warranted," Manfred said. "We are grateful for the courage of the individual who came forward. MLB will continue to strive to create environments in which people feel comfortable speaking up without fear of recrimination, retaliation, or exclusion.”

The Blue Jays issued their own statements four minutes after MLB did.

"Based upon this conclusion and our review of the investigation’s findings, the Blue Jays are severing all ties with Alomar, effective immediately," the club said, referring to the Manfred investigation. "The Blue Jays are committed to advancing respect and equity in baseball and are taking further action by removing Alomar from the Level of Excellence and taking down his banner at Rogers Centre. We commend the courage demonstrated by the individual who bravely came forward, and in order to respect their privacy, the organization will have no further comment at this time."

Said team president/CEO Mark Shapiro: "The Toronto Blue Jays believe in creating a safe, inclusive, and empathetic environment, where everyone involved in our game is respected. I am reaffirming our organization’s commitment to our employees, fans, media, and partners to uphold a culture of respect that treats all individuals with dignity."

Alomar tweeted a statement in both English and Spanish: "I am disappointed, surprised and upset with today's news. With the current social climate, I understand why Major League Baseball has taken the position they have. My hope is that this allegation can be heard in a venue that will allow me to address the accusation directly. I will continue to spend my time helping kids pursue their baseball dreams. I will not be making any further comment at this time."

The Hall of Fame, meanwhile, announced that Alomar's plaque will remain up and he will continue to be honored in Cooperstown. In a statement from Chairman Jane Forbes Clark, the Hall said it was "shocked and saddened" by the news but said the plaque would remain on display "in recognition of his accomplishments in the game, and his enshrinement reflects his eligibility and the perspective of BBWAA voters at that time."

The Bisons open their "home" season in Trenton, N.J. on Tuesday night vs. the Worcester Red Sox.

Back home at last in ... New Jersey? Bisons ready to start a season unlike any other

Everyone agrees this is one strange situation. But they also agree that the best part is they'll be playing baseball again Tuesday night.

Bisons notebook: Nate Pearson on the mend, looking for return to Jays' rotation

Hear that Bison Thunder: A solid opener in Trenton as Herd stampedes to a win

The Bisons/Thunder were on top of their game in all phases in their season opener against the Worcester Red Sox, scoring two runs in the first and loping home with a 6-1 victory before a socially-distanced sellout crowd of 1,526.

Blue Jays GM: Buffalo timetable is likely to come within the next week

The Blue Jays have not officially announced they're coming to Buffalo and there have thus been no tickets put on sale for any games.

Bisons make temporary relocation official: 'Home opener' May 4 will be in Trenton

Sahlen Field renovations are being paid for by the Blue Jays and Bisons, without use of public funds.

The Blue Jays have completed a number of upgrades to prepare Sahlen Field for Major League play. 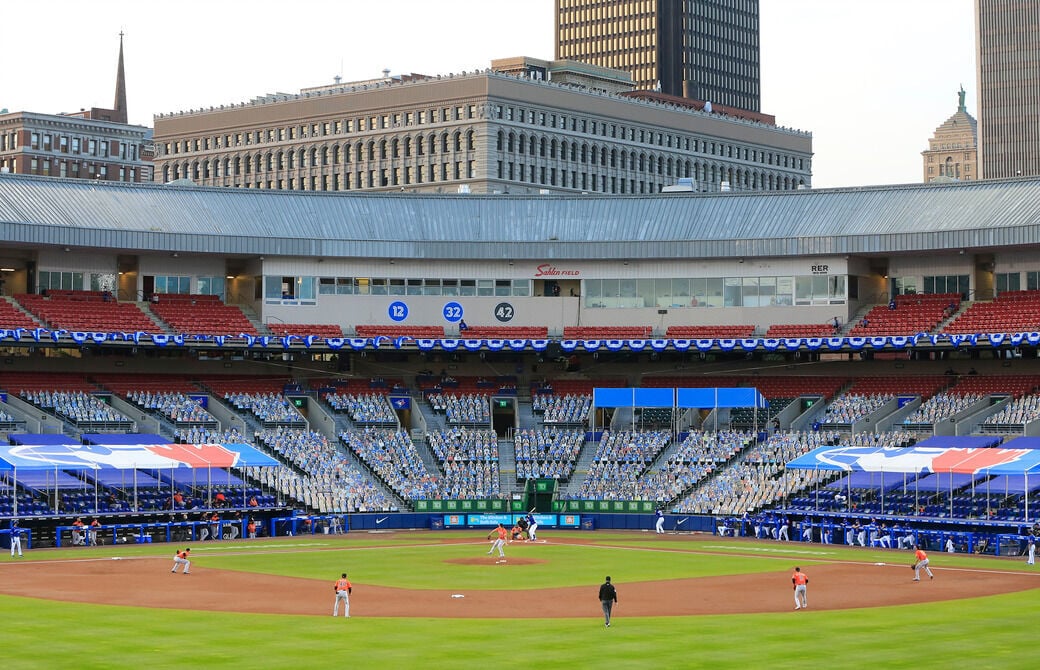 Roberto Alomar's No. 12 is on the facing of the press box next to Roy Halladay (32) and Jackie Robinson (42) in this panorama of Sahlen Field during a Blue Jays-Orioles game last September. 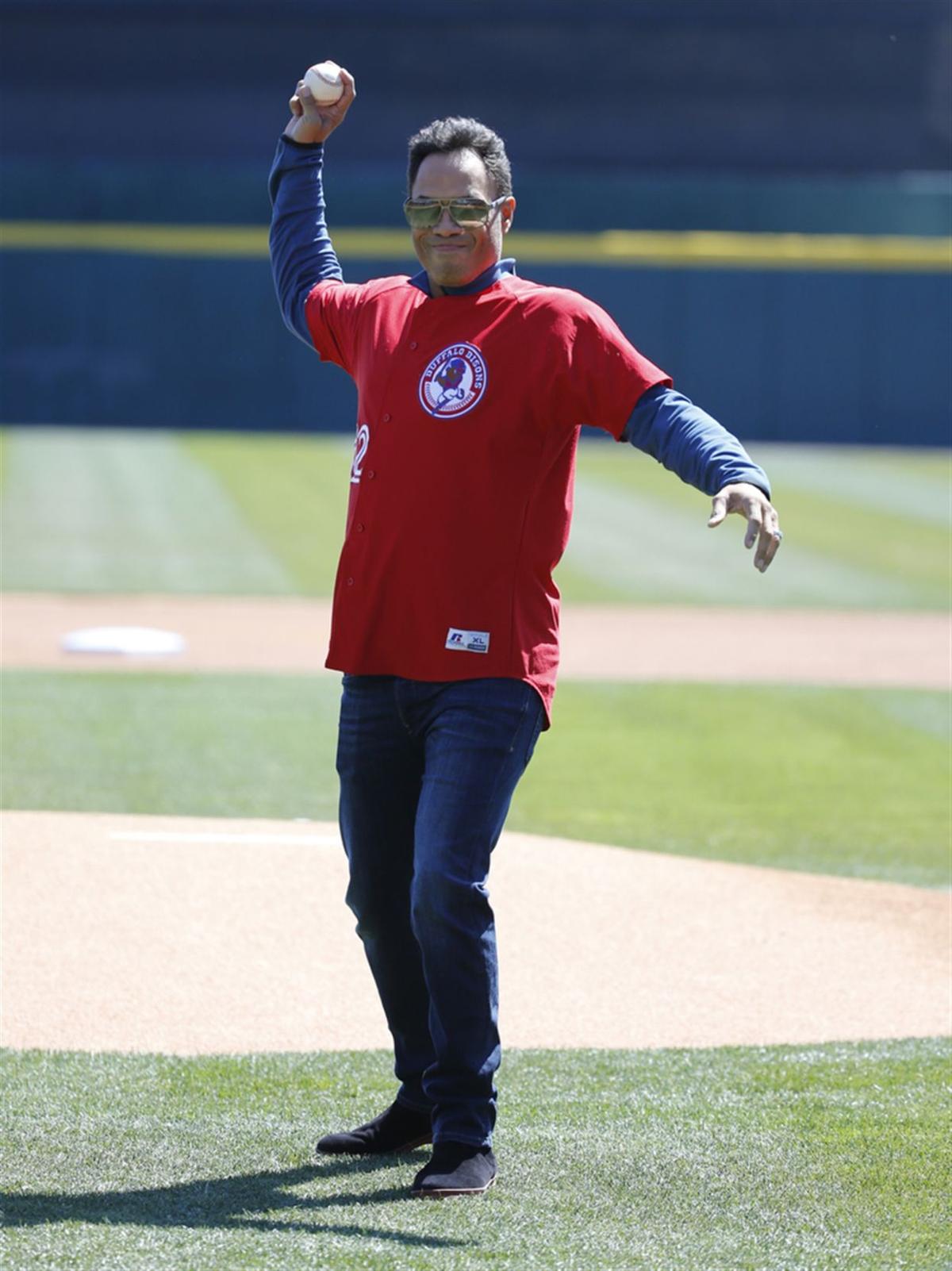 Wearing a Bisons jersey, Hall of Famer Roberto Alomar  throws the first pitch prior to the Buffalo Bisons' home opener against the Rochester Red Wings game at then-Coca-Cola Field on Thursday, April 14, 2016.