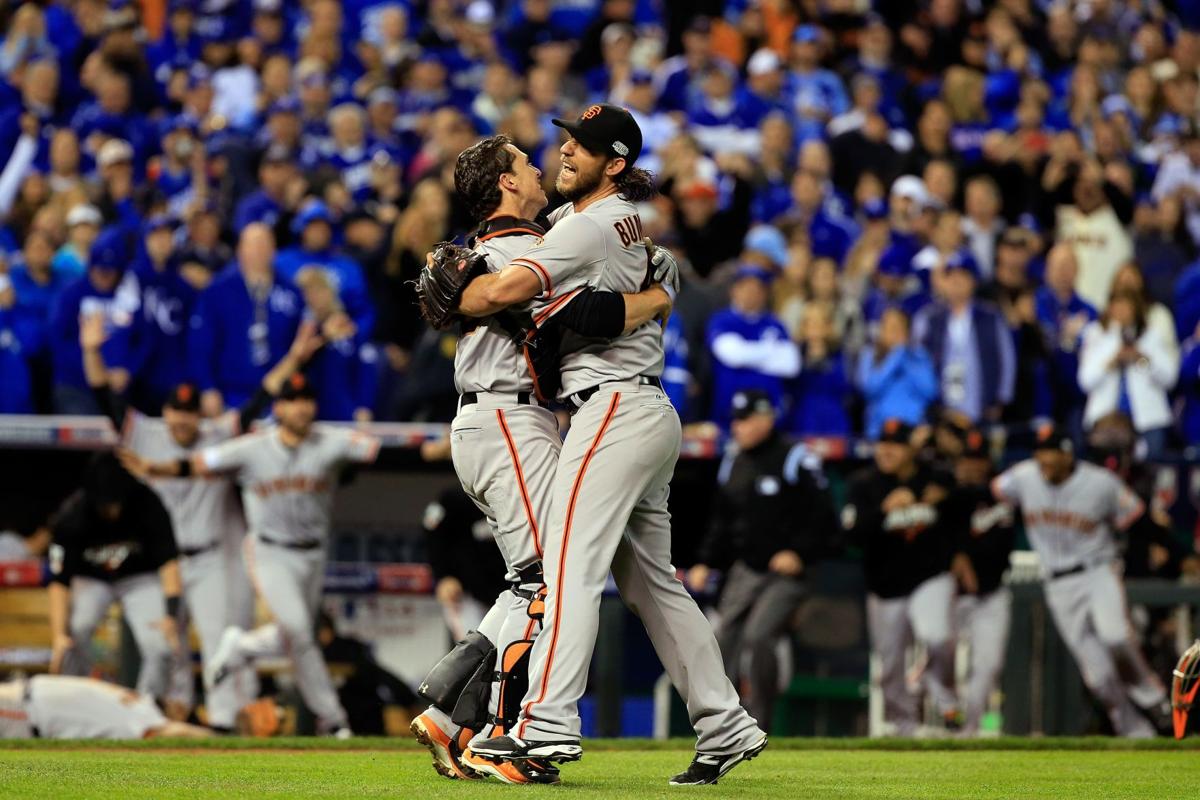 Giants catcher Buster Posey and Madison Bumgarner celebrate after defeating the Royals to win Game Seven of the 2014 World Series, 3-2. 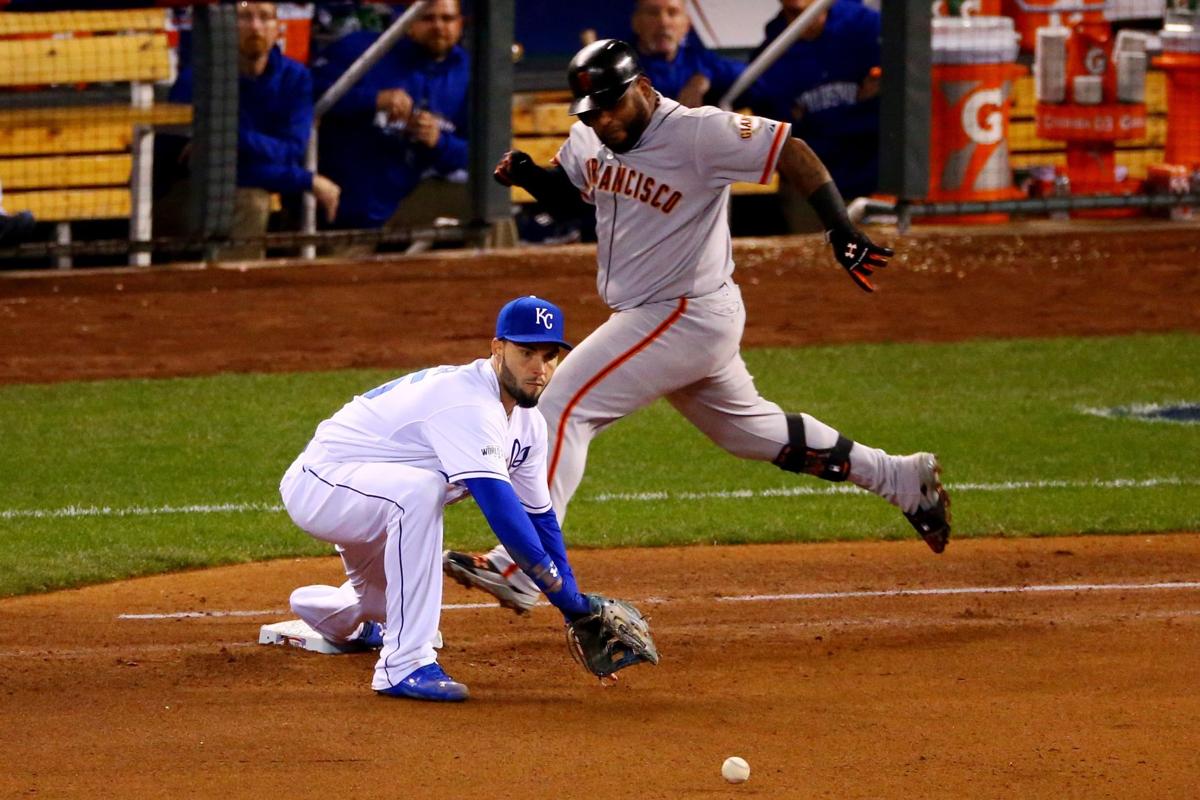 Pablo Sandoval of the San Francisco Giants beats the throw to first to Eric Hosmer of the Kansas City Royals in the fourth inning.

Those names all live forever in the Fall Classic. And now there’s a new one to add. Because a soft-spoken, 25-year-old left-hander from North Carolina passed them all this month.

This October and this World Series were all Madison Bumgarner’s world. We were just living in it. The man they call “MadBum” gets a chapter all his own.

Pitching on two days rest after his scintillating shutout in Game Five, Bumgarner dazzled in relief Wednesday night in Game Seven. In a spectacular performance with virtually no parallel in baseball history, Bumgarner threw shutout ball over the final five innings as the San Francisco Giants beat the Kansas City Royals, 3-2, to take their third title in five years.

Bumgarner gave up a leadoff single in the fifth to Omar Infante, then retired the next 14 men he faced. One out away from a title, he watched in horror when Alex Gordon singled and reached third as Gregor Blanco butchered the ball in center field and let it roll to the wall.

No matter. Bumgarner induced Salvador Perez to loft a towering foul pop off third base. Pablo Sandoval squeezed it and Bumgarner came down off the mound to embrace catcher Buster Posey before they were swallowed by their onrushing teammates.

“I was just concentrating on making pitches,” said Bumgarner, who had to be the easiest most valuable player choice in Series history. “I wasn’t thinking about how many innings I was going to go or how many pitches or anything. Just thinking about getting outs. Fortunately for me we had some pretty quick ones and that gave me a chance to stay out there.”

The Giants cemented their place in history with title No. 3. No team has done that in a five-year span since the New York Yankees won three in a row and four out of five years from 1996 to 2000.

Even more impressive, the Giants joined the St. Louis Cardinals of the 1940s as the only National League team to pull the trick, all while breaking a nine-game losing streak for visiting teams in Game Seven that dated to 1979.

And it means three Series titles for veteran manager Bruce Bochy, who has likely punched his ticket to the Hall of Fame someday. Bochy becomes the 10th manager to win three titles – and the previous nine have all made it to Cooperstown.

Bumgarner retired 15 of the 17 men he faced and was initially credited with his third victory of the series. Well after midnight, it was changed to a five-inning save and the win was given to reliever Jeremy Affeldt.

But that’s just bookkeeping. This will forever be remembered as Bumgarner’s game. He threw 50 of his 68 pitches for strikes and lowered his career ERA in the World Series to an astonishing 0.25. It was 0.43 in this series (one run in 21 innings).

“To me, you would be hard-pressed to find a performance like this ever,” said Posey. “It’s got to be one of very few in the history of baseball. What he did out there tonight is just incredible. He was just so good we couldn’t take it out.”

“It’s really special to keep hearing that,” Bumgarner said of the nods to history. “Obviously it hasn’t sunk it yet. There’s not been near enough time to think about it. This is as good as it gets. World Series Game Seven. It’s pretty stressful at the same time.”

Bumgarner, who set an all-time record with 52∏ innings pitched in the postseason, joined Arizona’s Johnson (2001) and Milwaukee’s Mike Caldwell (1982) as the only pitchers since 1960 to make a relief appearance in Game Seven of the World Series after pitching a shutout in an earlier game.

The Kauffman Stadium crowd of 40,535 barely needed their seats because they spent so much of the game standing and roaring. They were pleading for the Royals to break through in the ninth, twirling white towels aloft.

Eric Hosmer led off and got ahead in the count, 2-0. But Bumgarner bounced back to strike him out, getting him to swing through a 92-mph fastball for strike three. Billy Butler fouled out to Brandon Belt at first.

There was one out to go. What could go wrong? Disaster nearly happened on the Gordon single.

“That’s a big outfield so I was just wanting someone to get it and get it in. Which they did in plenty of time,” Bumgarner said. “But it was a little nerve-wracking though.”

“I knew he would make the pitch then,” Sandoval said. “No worries. When that ball in the air, I just waited and waited. Two hands on it.”

Designated hitter Michael Morse was the hero at the plate for San Francisco, driving in two of the Giants’ three runs. He plated the game-winner with a fourth-inning single to right of Royals relief stud Kelvin Herrera. Even more impressive, Morse fought off a 99-mph heater on an 0-2 pitch to drive in the run.

What happened Tuesday was one of those moments amid the swirl of decades of events when civic history becomes almost surreal, writes Sean Kirst.

The Blue Jays will play their homes games at Sahlen Field starting Tuesday night through the end of September.

The Toronto Blue Jays will play their first home-away-from-home game in Buffalo on Tuesday. So near they're here, and yet so far we can’t see them.

Philadelphia Phillies outfielder Andrew McCutchen, who played in Sahlen Field as a member of the Indianapolis Indians in 2008, offered his own…

Ben Wagner's worlds are coming full circle — albeit from afar — with the 25 Blue Jays games slated to be played in Sahlen Field.

Giants catcher Buster Posey and Madison Bumgarner celebrate after defeating the Royals to win Game Seven of the 2014 World Series, 3-2.

Pablo Sandoval of the San Francisco Giants beats the throw to first to Eric Hosmer of the Kansas City Royals in the fourth inning.