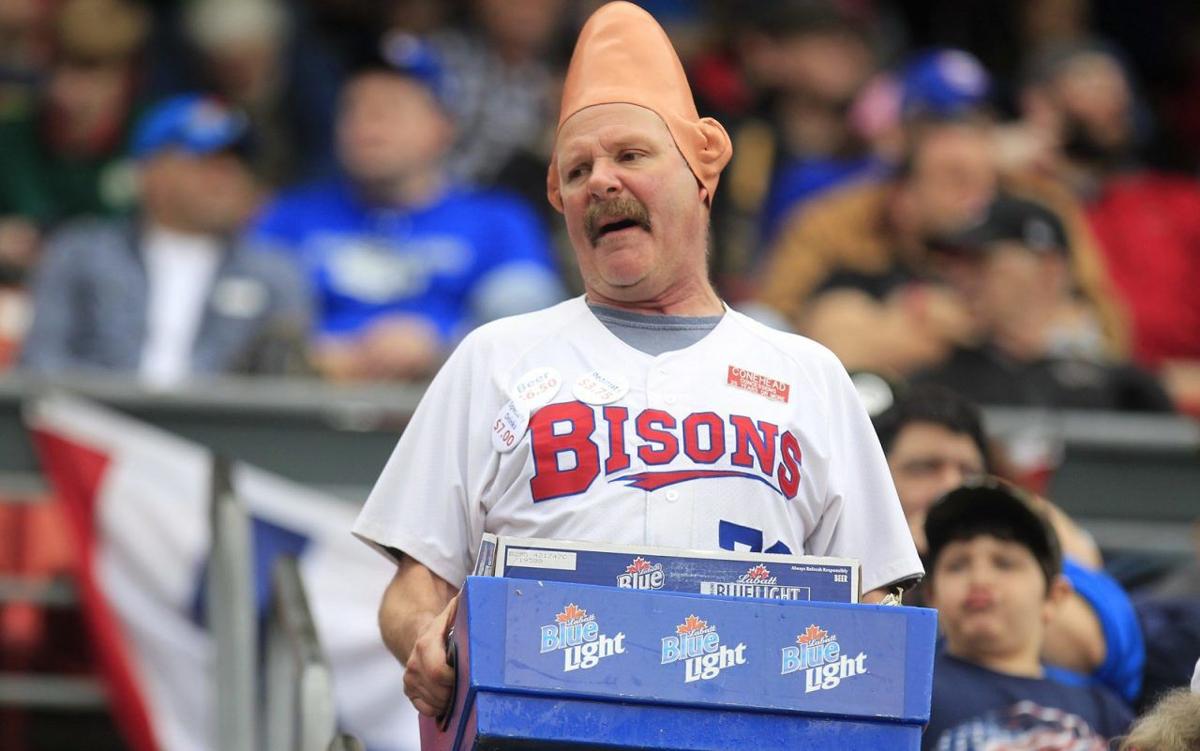 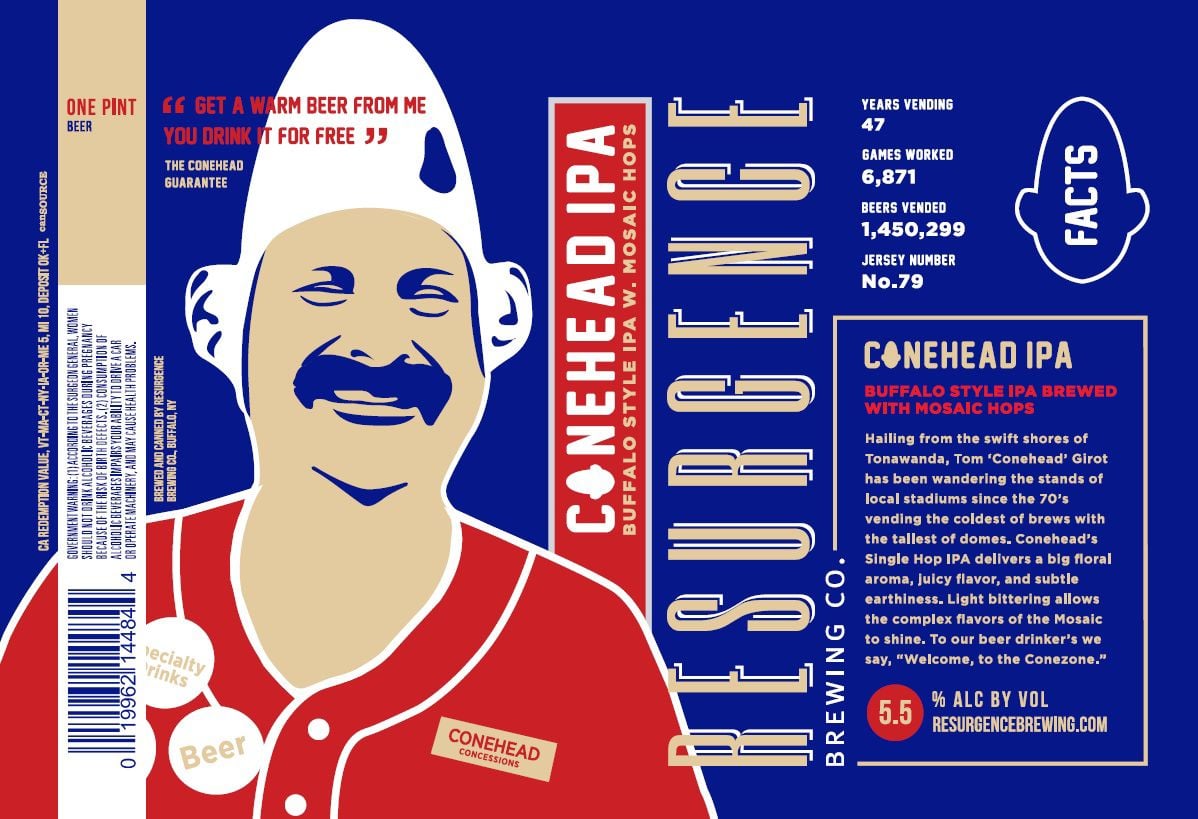 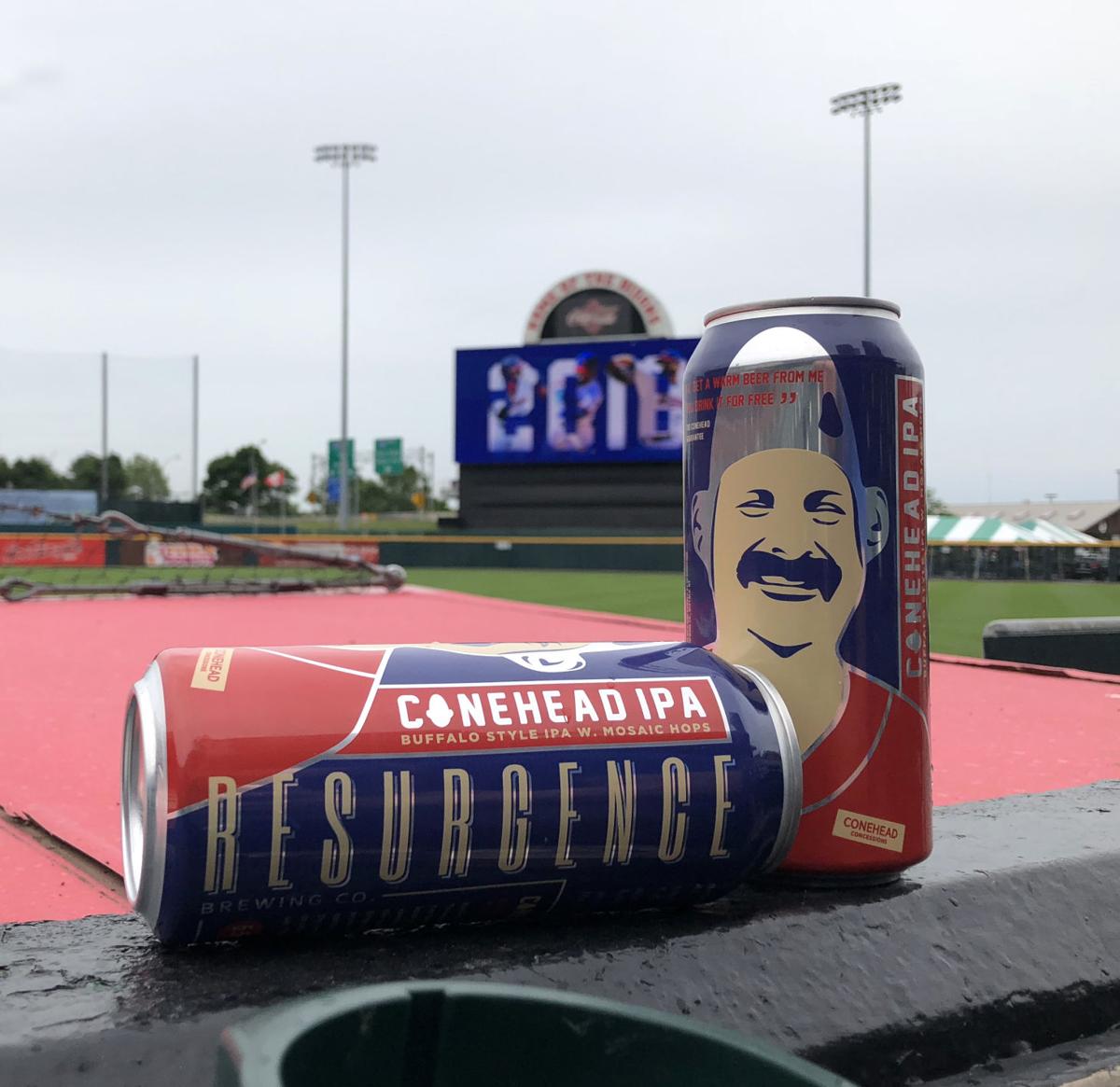 Tom Girot figures he has sold 1.45 million beers in his 47 years hawking concessions at local games.

Now, he's getting one of his own.

Girot – better known to Western New York fans as "Conehead" – will be featured on his own brew to celebrate his 40th year with the Buffalo Bisons this summer.

As part of that anniversary, the Bisons partnered with Resurgence Brewing Company to brew "Conehead IPA," which will make its debut at Coca-Cola Field Friday when the team begins a homestand against the Lehigh Valley IronPigs at 7 p.m.

"My whole life has revolved around beer, either drinking or selling, so I guess it's a culmination of that," Girot said. "I'm absolutely thrilled – surprised and thrilled.

"I usually tell people that my favorite beer is whatever is in my hand at that point in time," he said with a chuckle, "but that may change now."

The project came together when the Bisons – who are holding Conehead Day at the ballpark on July 6 – approached some of their partners with the idea of celebrating Conehead's tenure.

"Conehead has been a tremendous ambassador for Buffalo Bisons baseball and the Bisons baseball experience at the ballpark," said Brad Bisbing, the team's director of marketing and public relations. "He's been a beloved figure in this ballpark's history for so many years, and in this special year it's a nice little add-on for what he's meant to the team."

Girot, 63, became "Conehead" in 1977. That Halloween, his wife and her fellow hairdressers all wore the coneheads as the look was being popularized by the "Saturday Night Live" sketch featuring Dan Aykroyd. Not wanting to see the costume go to waste, Girot wore the conehead at the next Buffalo Bills game he vended. He's been "Conehead" ever since.

"Conehead is an institution at the ballpark, and to tie it all together is really exciting," said Jeff Ware, owner of Resurgence Brewery Company. "Beer should be fun."

That fun is displayed on the Conehead IPA can, which features an image of Girot as Conehead along with the famed "Conehead Guarantee," which fans have heard Girot holler for decades: "Get a warm beer from me, you drink it for free."

The can also features a baseball-card-like bio and career statistics for Girot: 47 years vending, 6,871 games worked, 1,450,299 beers vended and jersey number No. 79 (which he wears in honor of the Bisons' modern rebirth in 1979, when Girot was an original stockholder in the team before it was purchased by Bob Rich).

Girot has worked Buffalo Bills football games and Rochester Americans hockey games, while he is still a regular at Buffalo Sabres hockey (2018-19 will be his 47th season), Rochester Red Wings baseball (30 seasons) and the Bisons.

"I'm at 1.45 million beers – I don't think I'll get to 2 million unless the Sabres go on some playoff runs," Girot said, before optimistically referencing to the player the Sabres will make the No. 1 pick in the NHL draft Friday night: "Hopefully Rasmus Dahlin will help me out on that."

Conehead isn't just on the can, he had plenty of input on what's inside. Ware knew that Girot was a big fan of craft beers, so he consulted him on what kind of beer the Conehead IPA should be.

"I knew he frequented our brewery and other breweries around town," Ware said. "And I knew he was a big IPA guy from talking to him in the past. What a cool idea to have a beer that he was really into, that he was involved in the creation of, and have him vend it at the stadium."

Girot is a fan of Mosaic hops, a patented hop named for the complex variety of aromas and flavors it can present, ranging from earthy to floral to fruity.

"I knew he was a big fan of the New England style, the big style that we make in general, and he said Mosaic hop was his favorite hop," Lowe said. "We just took that and ran with it. We rounded out the recipe for a nice, creamy beer to showcase the hops. We didn't want to put too much malt in there. It has some body to it. It's a 5.5 (percent alcohol by volume), so you can drink a couple of them and enjoy it.

"We wanted to make something so that you can have a couple at the game and still be able to walk out of the game."

While the Conehead IPA is primarily available at Bisons games at Coca-Cola Field, a limited supply of the Conehead IPA four-packs are for sale for $12 at Resurgence Brewing Company at 1250 Niagara St.

It also will be available next week as part of a special promotional ticket package for the Ballpark Brew Bash, a beer festival hosted by the Bisons at Coca-Cola Field on Sept. 21. Ballpark Brew Bash tickets that normally cost $35 will be available for $30 at Consumer's Beverages. With the ticket comes a two-pack of Conehead IPA, a free Bisons ticket and a coupon for a free drink at the Consumer's Craft Corner in the stadium during a Bisons game.

At the park, the Conehead IPA will now find a spot in Conehead's crowded tray, which can hold about 40 beers. He already hawks Labatt Blue, Blue Light, Bud, Bud Light, Labatt Blue Lime, Hayburner IPA (from Buffalo's Big Ditch Brewing), All Day IPA (from Detroit's Founders Brewing Co.). Conehead IPA and the other IPAs go for $8 while the other beers are $7.

"It'll be just another beer I'm carrying, hopefully people will ask for it," said Girot. "It's supply and demand, and you have to have the supply to meet their demand. Like any other business, you have to have a pretty good prediction on what the demand is."

"That's a really important part of the job – predicting what is going to sell and who you are going to serve next, because you are carrying quite a few beers. Is Mike ready? Is Geno ready? You have to get back to people when you think they'll be ready. Being as experienced as I am, that's one thing I'm pretty good at, getting there on time. You definitely don't want to get there too late."

Getting the beer to the beer drinker is obviously a big part of the "Conehead Guarantee," and that guarantee is certainly relevant with Conehead's namesake beer.

"When IPAs are warm, like any other perishable product, they will start to break down," said Ware. "A cold beer will stay fresh longer, so that ensures you are getting a full-flavored beer. It's going from our brewery cold, right to the Bisons cold, right to Conehead cold."

Girot, who has two daughters and three grandchildren, manages properties when he's not at the game, and it sounds like he'll be adding to those statistics on the Conehead IPA can for several more years.

"I absolutely love the contact with the fans," he said. "I always feel I'm not serving customers, I'm serving friends. I get to go to the ballpark to go hang out with my friends, and I don't have to buy a ticket.

"I look forward to the 50th anniversary."

Roy Hobbs takes a mighty swing. His pennant-winning home run explodes the stadium lights. And he rounds the bases in triumph. That’s how the film version of “The Natural” ends. Right? Well, yes, that’s the climactic moment, but then comes a bit more. Remember? The home-run ball floats across time, across the plains and prairies, until it smacks, at