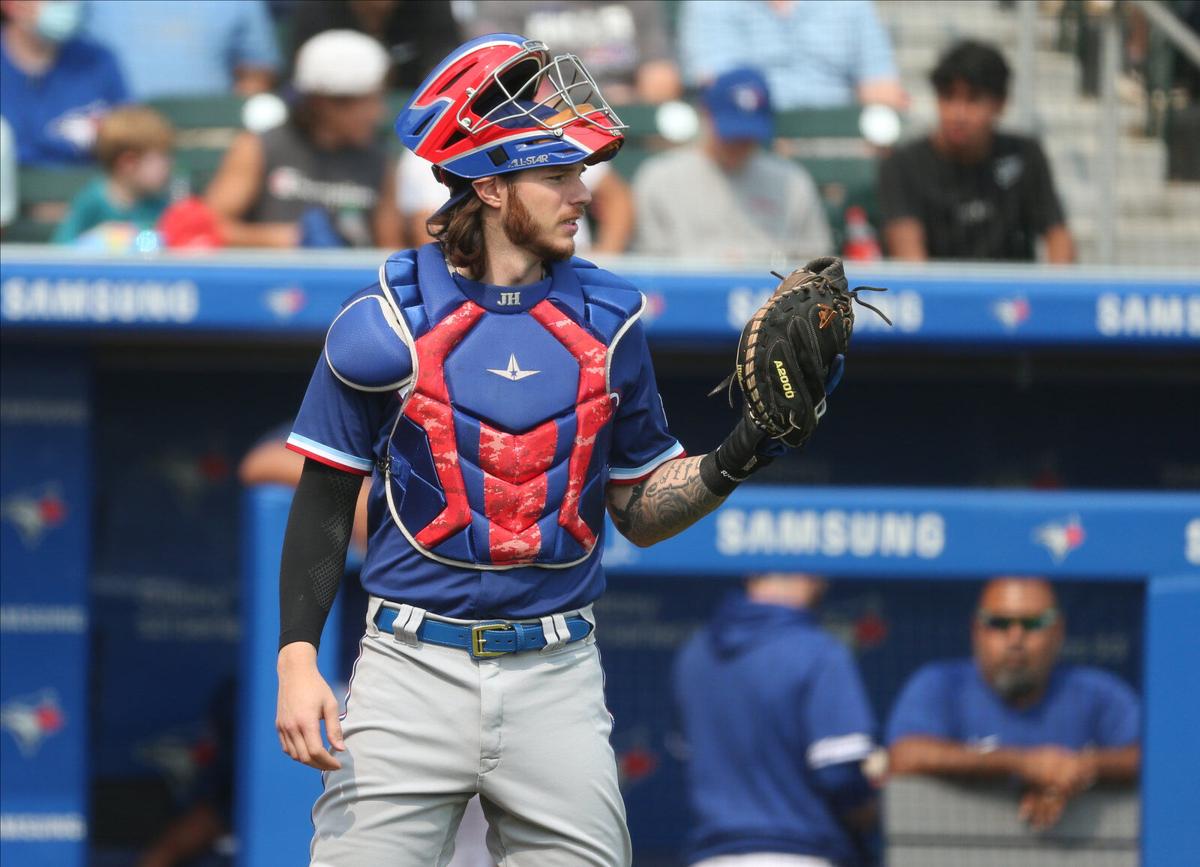 Texas Rangers catcher Jonah Heim went 1 for 3 in the nightcap of a doubleheader on Sunday, July 18, 2021 – when he piled up more standing ovations from the Sahlen Field crowd. 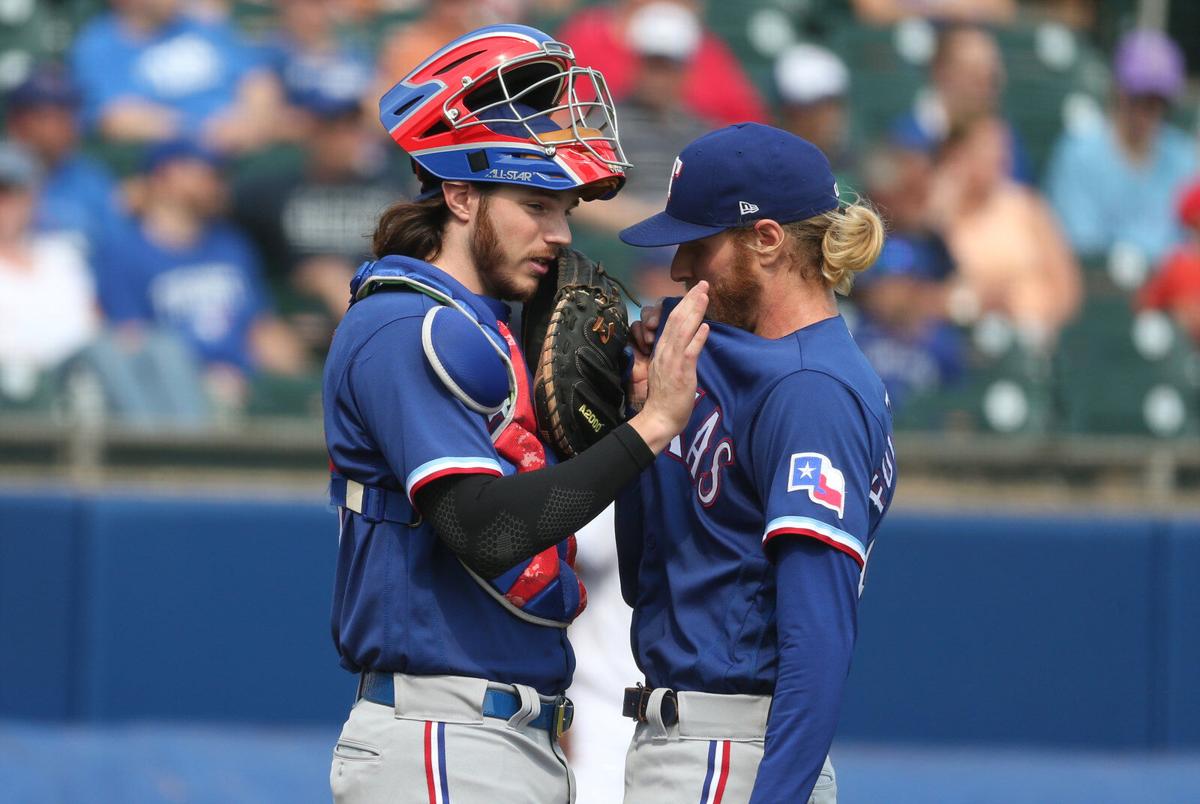 The scoreboard told a difficult story and that, of course, is Jonah Heim's top priority. But if the Amherst native were to go on and play a decade or more in the major leagues, he'll probably never have another weekend like this one.

For Jonah Heim, the long road to games at Sahlen Field will be a family affair

The story of Jonah Heim – who has never played in Sahlen Field – has been well-documented, but the perseverance bears repeating.

Heim's Texas Rangers lost a doubleheader to the Toronto Blue Jays on Sunday and got shut out in both games. He didn't play in the opener and went 1 for 3 in the nightcap – when he piled up more standing ovations from the Sahlen Field crowd.

"It's terribly disappointing when you get swept on the road coming off the break, but playing at home in front of all friends and family, it was pretty awesome," Heim said. "Definitely a surreal moment out there. Especially when everybody's standing up cheering when you're the visiting player. It's pretty cool."

There was polite applause for Heim on Friday, but the ballpark erupted when he singled to right field in the seventh inning, the applause growing into a standing ovation from most of the fans.

"It was definitely emotional. I know I didn't really show it, but inside I mean, that was just pure joy," he said. "Just to see the love from the hometown fans and acknowledgement of me coming back and playing and just getting a measly base hit. That's pretty special. Something I'll never forget."

Jonah’s agent (former MLB infielder) drops this video from @BallySportsSW postgame coverage Friday night of the base hit and the ovation that followed in Sahlen Field. https://t.co/03Kw3AHREM

Heim grounded out to short in the second inning Sunday and singled to right again in the fifth. The emotions really came out prior to Heim's final at-bat in the seventh. The applause grew after his introduction, with his family members and many other fans again standing.

It got to the point that Heim had to step out of the batter's box to collect himself before bouncing a chopper back to pitcher Taylor Saucedo. After crossing first base, there was more applause and Heim slowly walked back to the dugout. He was clearly looking at his family behind first base and all around his home park after what you would imagine would be the final at-bat of his MLB career at home.

"Obviously, I didn't want to ground back to the pitcher, so that was a little frustrating, but it is what it is," said Heim, who is batting .232. "Just a lot of emotions going into that last at-bat. A little frustration, a little joy, just all the emotions came up at one time and I just had to take a breath."

The message you get from the Toronto Blue Jays is consistent: No offense, Buffalo, but it's time to go home.

As for the game itself, Heim, pitcher Mike Foltynewicz and the Rangers' dugout were all frustrated with plate umpire Ryan Additon's strike zone. The Blue Jays had no runs with two out in the first, but eventually scored twice before Heim thought Cavan Biggio had struck out on a close pitch. Additon felt otherwise and Biggio eventually walked.

Lourdes Gurriel rocketed a grand slam to left on the next pitch for a 6-0 Toronto lead and that was that.

"Things didn't go our way that inning, but when things don't go our way, we got to buckle down and try to get some more outs," Heim said. "I don't know what went wrong. 'Folty' made some great pitches, just some soft hits here and there and then they put together a good ending."

When the game was over, Heim came to the screen in right field. He signed a few autographs and said hello to his family and friends – many of whom wore his No. 28 Rangers jersey – before jogging off to the clubhouse in the Exchange Street parking lot and the plane to Detroit.

He knew his family would be leading the cheers this weekend. Getting the rest of the crowd to join them turned into a lifelong memory.

"The support is huge, especially being in the minors for seven years, and then finally getting this opportunity and they stuck with me the whole seven years," he said of his family. "And it shows just how much these people in Buffalo love sports. They follow it and they keep in touch with it. It's a tribute to the fans in Buffalo."

Why Ronaldo and Mbappé's futures are inextricably linked

Why Ronaldo and Mbappé's futures are inextricably linked

Bisons confirm Aug. 10 game vs. Rochester will mark their return to Sahlen Field

While announcing its restart date in Buffalo, the team also said tickets will go on sale at 10 a.m. July 26.

The Jays' last MLB game in Buffalo in a two-season run meant far more than a couple lines on a stat sheet.

The switch-hitting Amherst High product had his first four-RBI game in the major leagues.

The Sox should have plenty of support from Buffalo fans, who have never seen their team live in town.

If you have a ticket for Sunday's action, you're going to get double the fun for the same price.

Blue Jays president on Buffalo: 'We will all feel like we've been part of something historic'

On the day after he learned his team had received approval from the Canadian government to finally return home to Rogers Centre, Toronto Blue …

Blue Jays get the OK to go home, will end run in Buffalo on Wednesday

The Blue Jays got their long-awaited approval to return to Rogers Centre early Friday night. They are scheduled to start the Toronto portion of their schedule with a July 30 game against the Kansas City Royals.

Guerrero went deep in his first at-bat and then added No. 30 of his wondrous season – a monstrous three-run shot that carried to Oak Street in the seventh – as the Blue Jays pounded the Texas Rangers 10-2 in the opener of a three-game series.

Texas Rangers catcher Jonah Heim went 1 for 3 in the nightcap of a doubleheader on Sunday, July 18, 2021 – when he piled up more standing ovations from the Sahlen Field crowd.