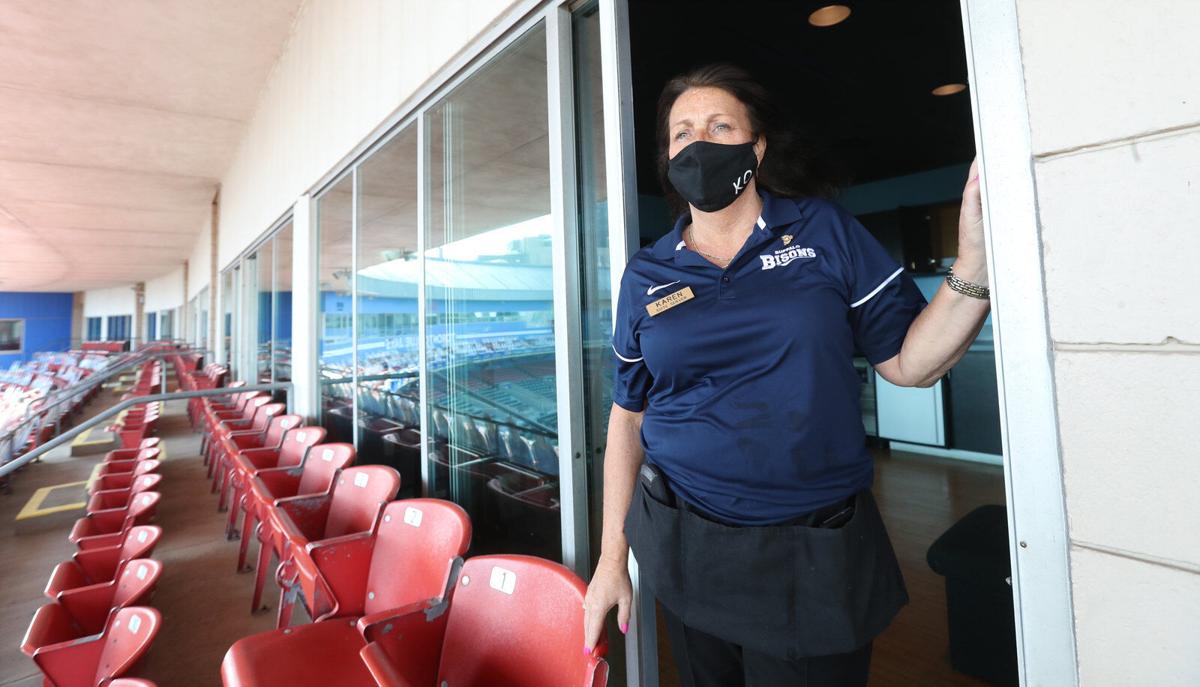 Karen O'Leary has been working in Sahlen Field's suites for years for the Buffalo Bisons. This season, she works for the Toronto Blue Jays. 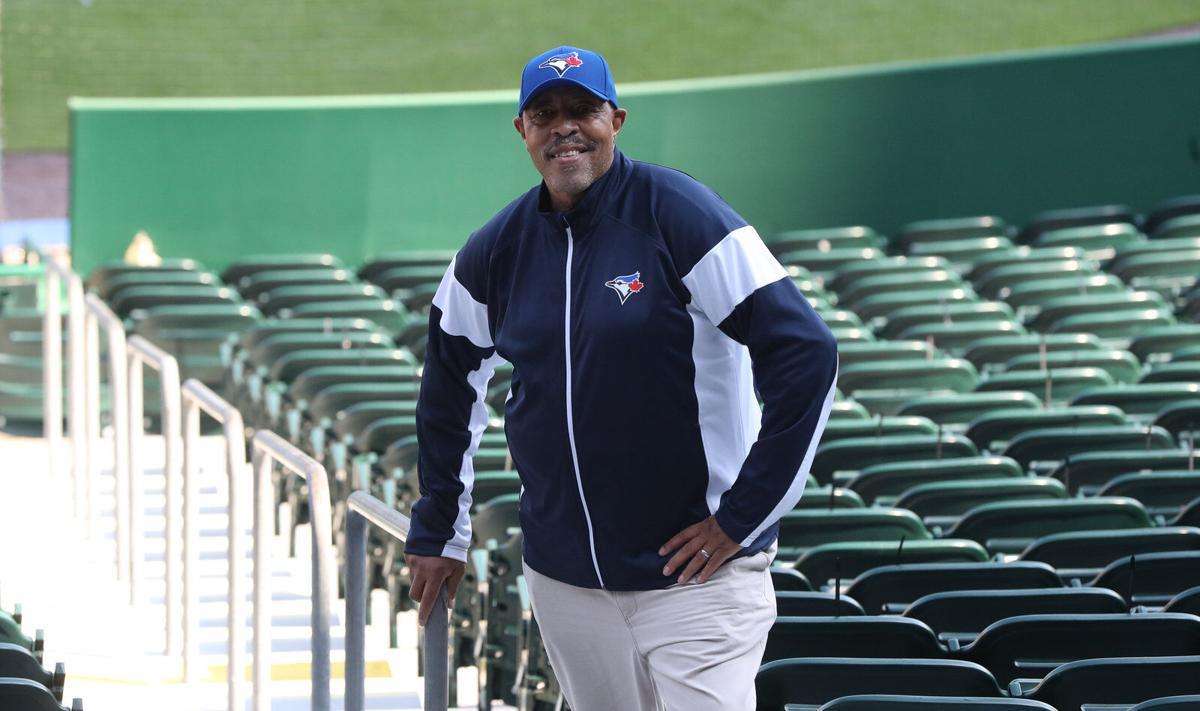 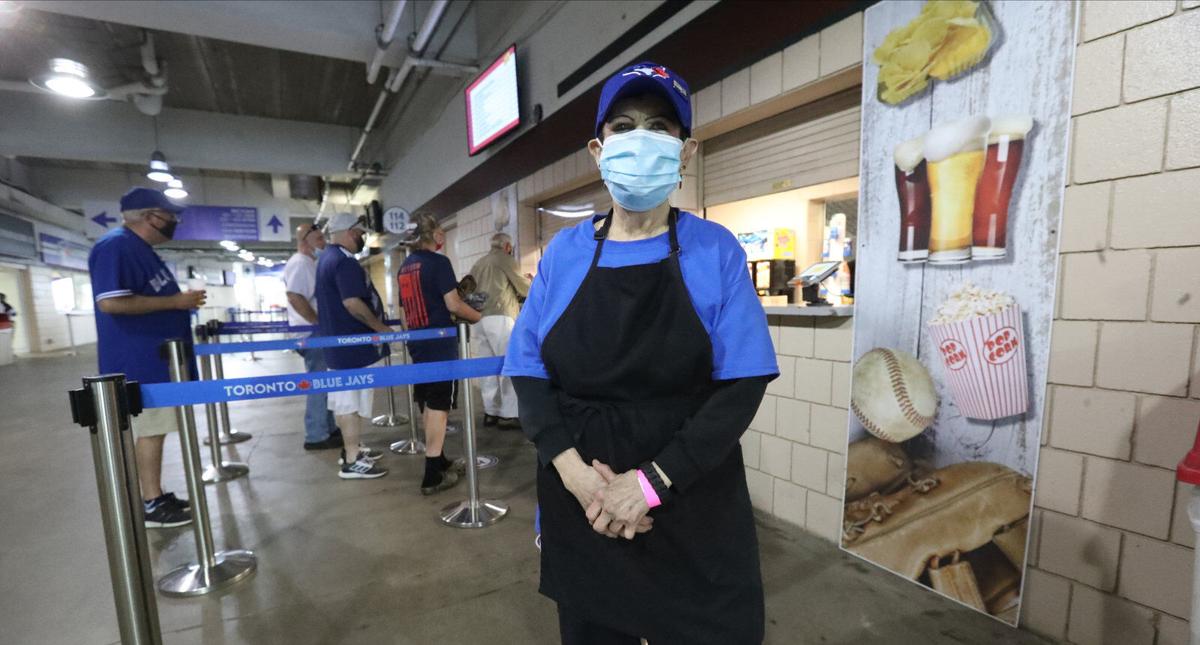 Dee Dee Mambrino has been working the concessions for many years at Sahlen Field.

Karen O’Leary, the head suite server at Sahlen Field, can count the games she’s missed since she began working for the Buffalo Bisons when the ballpark first opened in downtown Buffalo in 1988.

“The last time I called in sick, I had my appendix out,” O’Leary said. “I was getting ready to come to work. I was trying and trying and trying. I wound up in the hospital and had to have emergency surgery. That was 2015. Before that, it was 1995. I lost my baby brother to cancer at the age of 15 and 45 days later I lost my 22-year-old brother. He wound up committing suicide because he didn’t want to let his little brother be in heaven by himself.

Mike Myszka wanted to be among the first spectators to see Major League Baseball in the city since a Buffalo team played in 1915 in the old Federal League.

“It’s been a tough road for me, but I get through it and believe it or not, coming to work keeps my mind off my problems. I enjoy my job. When I come to work, all my problems, I leave behind.”

O’Leary always had her Bisons family for support, until last spring, when the Covid-19 pandemic shut down large swaths of society, and wiped out crowds at live sporting events once the games finally returned. The Toronto Blue Jays, unable to cross the border to play in Canada in 2020, instead displaced their Triple-A affiliate and played in an empty ballpark in Buffalo.

This week, with the border still closed to all but essential personnel, the Blue Jays returned for the 2021 season. And so did the fans.

An announced crowd of 5,510 poured into the stands at Sahlen Field – sitting side-by-side in the vaccinated section along the third baseline and socially distanced in the non-vaccinated section along the first baseline – on Friday night for the Blue Jays’ series opener against the Houston Astros, their second series here after winning back-to-back games against the Miami Marlins.

O’Leary and other original Sahlen Field gameday personnel – there are approximately 50, she said – took a few minutes to speak with The Buffalo News about what it means to be back.

“It’s like a real family here. It really is,” said Dee Dee Mambrino, who works in concessions. “And now, they’ve hired different people because some people didn’t come back. But I was talking to Mike (Buczkowski, the president of Rich Baseball Operations) last night, and I said, ‘You know, this was like the dream, to have Major League Baseball in Buffalo.’ It really was.”

Mambrino spent the evening staffing a concession stand behind Section 114, along the first base side, where she stood behind a plexiglass barrier, her wide smile covered by a blue mask.

She said it was devastating to not get to come to the ballpark last season.

“It was the first summer I didn’t work in years,” Mambrino said. “It just was heartbreaking, because I said, ‘Are we ever going to go back there? Is it ever going to be, that they’re going to open?’ ”

Garcia Leonard, the head usher on the club level, said it was tough being away from the ballpark last season and that returning was nostalgic – and a little weird.

The feeling of community extends from the longtime employees to the fans, he explained.

“They come here and you’ve seen them with their kids when they were little and now their kids are bringing their kids,” Leonard said. “And just to see everyone grow up and pass it along through the family, it’s an experience.

“Lord willing, you see the same people. You lose fans. You lose associates, you know? Larry the Peanut Man passed on a couple of years ago, and he was a mainstay at the ballpark. People came here and they wouldn’t get peanuts anywhere else. The same with Conehead. They won’t buy a beer from anybody but Conehead. You know? It’s a part of their ballpark routine. It’s that novelty of getting a bag of peanuts from Larry and a beer from Conehead and taking a picture with Buster Bison. It’s all a part of the ballpark experience.”

Mambrino said that everyone is adjusting to the new rules.

“Before, if someone ordered a beer, I had to open it and pour it, but now you just hand them the can,” she said. “They take the cans to the seats. I was very surprised at that. They don’t want an opened container while they’re walking on the concourse.”

O’Leary said her son, Joel, once joined her as an employee at the ballpark for four seasons, running beverages to the suites when he turned 18.

O’Leary, who serves the Buffalo Bills’ and Sabres’ suites, said she has one rule that’s never changed.

“I’ve waited on a lot of important people,” O’Leary said. “It’s been great. But I treat everybody the same. Just because the mayor comes in, I don’t treat him any better than I treat the paying customer. I treat everybody equal.

“And it’s wonderful. I’m so happy to be back and to see the regulars.”

Leonard said his wife used to joke about his decades of devotion to the Bisons.

“She teased me a lot, saying, ‘You’ve been working for minor league baseball for a long time. When are you going to get called up?’” Leonard said. “And I’m like, ‘Just be patient. They’re going to see my worth.’ Unfortunately it took the pandemic, and here we are. But I joked with my wife, ‘I’m up in the bigs, now.’ And we can laugh about it. But you don’t take it out of perspective. A lot of unfortunateness went with this.

“Hats off to the Blue Jays and the Bisons to collaborate together and really make it safe here. Keeping people who aren’t vaccinated socially distant, you feel safe, so to speak. And that’s a big thing. It’s just so good being back. It’s like a breath of fresh air.”

Martin Maldonado crushed a first pitch grand slam over the wall in left field to chase Toronto Blue Jays starter Hyun Jin Ryu from the mound with two outs in the sixth inning and help lead the Houston Astros to a 13-1 victory on Friday night at Sahlen Field.

Buffalo memories: Dusty Baker on the Rockpile, Polish names and the Bills

"I felt like I was going to a town that was full of history when I came to Buffalo," the Astros manager said of his 1969 trip.

The relationships between a Triple-A baseball team and its major-league parent can often be tenuous. We've seen that first-hand.

With bat and glove, it's another big day for Vladdy Jr. in Blue Jays' win

Tickets for 16 games from June 24-July 21 go on sale for Bisons season ticket holders at 10 a.m. Tuesday and to the general public at 10 a.m. Thursday.

Karen O'Leary has been working in Sahlen Field's suites for years for the Buffalo Bisons. This season, she works for the Toronto Blue Jays.

Dee Dee Mambrino has been working the concessions for many years at Sahlen Field.