Virus update: Europe locking down as US passes 99,000 cases a day

It all turned around in one chaotic 44-minute inning.

Wiping out a 6-2 deficit, the Jays exploded for 10 runs in the bottom of the sixth and whacked the New York Yankees, 12-7, Monday night in the opener of their three-game series at Sahlen Field.

Three New York relievers needed 67 pitches to get out of the inning. Adam Ottavino didn't get an out, allowing four hits and two walks. Travis Shaw's two-run single snapped a 6-6 tie and Danny Jansen, who entered the game batting .148, followed with his first career grand slam by belting a towering drive to left-center.

The Blue Jays (23-18) moved two games in front of the Yankees (21-20) in the battle for second place in the American League East with the stunning turnaround.

The Blue Jays erupted for double figures after losing their top hitter, right fielder Teoscar Hernandez, to the injured list with an oblique injury. Hernandez, second in the American League with 14 home runs, was injured Saturday in Boston and could be down a couple weeks.

Toronto ace Hyun-Jin Ryu was torched for back-to-back home runs in the first by Luke Voit and Aaron Hicks, another solo shot by Miguel Andujar in the fourth and a two-run double by Clint Frazier in the fifth. He left in a 5-2 hole. The offense rescued him.

How to take the lead in a New York minute 😉👇 pic.twitter.com/d3BLERo0VF

The Blue Jays scored 10 runs in an inning for the first time since 2010. They did it on only five hits with four walks and an error. All 10 runs, capped by the Jansen grand slam, came before two outs were made.

According to STATS Inc., it was the first time the Yankees bullpen has allowed 10-plus runs in an inning since June 22, 1932, against the St. Louis Browns.

Sluggers on the mend

Injured Yankees outfielders Aaron Judge and Giancarlo Stanton were both busy back home in the Bronx as they continue to nurse their leg injuries. Stanton is closer to returning as he's doing multiple baseball activities. Judge just started running on Monday.

Said manager Aaron Boone: "I know he's feeling well and everything went well in his first running on the field. That was good news."

• ESPN.com attended the Blue Jays' opening game here on Aug. 11 and the Boston Globe attended the series against the Red Sox. That's been it for visiting media organizations thus far, but that changed with the Yankees in town.

ESPN, the New York Post, New York Daily News, Newsday and Bergen (N.J.) Record are all on hand for this series. The Post is represented by veteran columnist Mike Vaccaro, a 1989 St. Bonaventure grad and diehard Bona basketball fan.

• The series opener marked the first September baseball game in Buffalo since Sept. 1, 2016, the Bisons' home finale against Scranton.

It's the latest action at Sahlen Field since Sept. 11, 2005, the 6-4 loss to Indianapolis in the decisive Game 5 of the International League semifinals. The Bisons lost three straight at home to blow that series and have yet to return to the postseason since.

• The cardboard cutout population in the ballpark has grown again as likenesses of a few dozen Blue Jays fans have been placed in the right-field party deck to join the couple thousand that ring the lower level of the ballpark.

Column: A crisis calls Yankees GM Brian Cashman to Buffalo to have his say

At one of their biggest crisis points in recent memory, the longtime GM decided it was time for a one-way conversation.

Column: Blue Jays deserve their day off after resurrecting their season

"For all the talk about the Yankees' injuries, not nearly enough is being said about what the Blue Jays are going through," writes Mike Harrington.

As the first base coach of the Toronto Blue Jays, the popular former Buffalo outfielder is looking at a legitimate chance of being part of October baseball.

Inside Baseball: New York, New York homestand made for an incredible week at the ballpark

The Yankees bashed an MLB-record 19 home runs off the Blue Jays last week in New York.

The Yankees lost in Boston, got on their flight, got the help they needed when Seattle lost to San Diego in an 11-inning affair and manager Aaron Boone gathered them when they arrived in Buffalo.

The Jays are a team on the rise still trying to plug holes. Things looked mighty good Monday with a 11-5 rout of the Yankees

For the Toronto Blue Jays, Zeuch has one win each of the last two seasons – and both have been against the New York Yankees.

While they were playing the New York Yankees, the Blue Jays didn't get the help they needed out of town.

One is the magic number after Blue Jays' destruction of Yankees

By the Numbers: Yankees in town for series with Blue Jays

'Shout' vs. ‘OK Blue Jays’: How do iconic team songs match up?

Both the Bills’ and Jays’ theme songs have become iconic signifiers of fan devotion. Jeff Miers explores how they stack up against each other.

Inside Baseball: It's become an alternate world for Bisons manager Ken Huckaby

If the world was on the schedule we were planning in March, the Bisons' 2020 home finale would have been played Sunday at Sahlen Field.

Column: Jackie Robinson Day has even deeper meaning in our turbulent summer

This column might approach 1,000 words and I fear none of them are going to be worth the picture you can see with it, writes Mike Harrington. 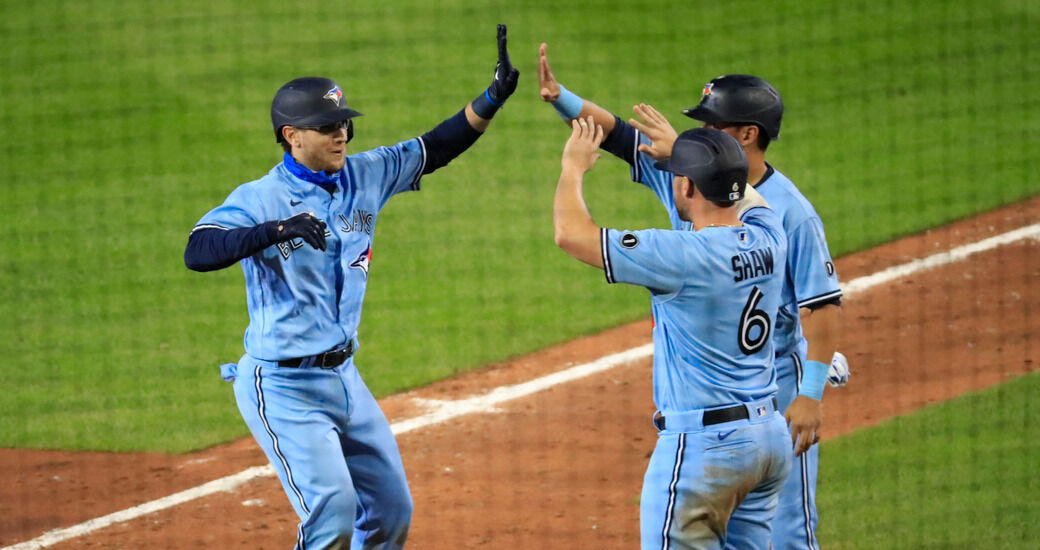 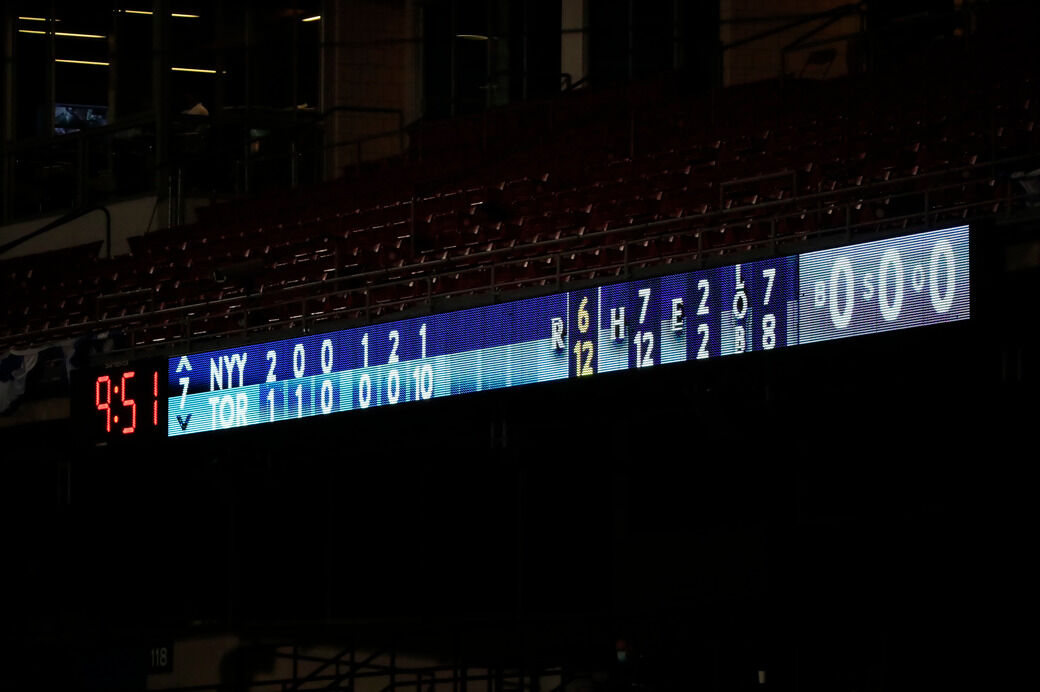 The linescore as the Toronto Blue Jays put up 10 runs against the New York Yankees during the sixth inning at Sahlen Field on Monday, Sept. 7, 2020