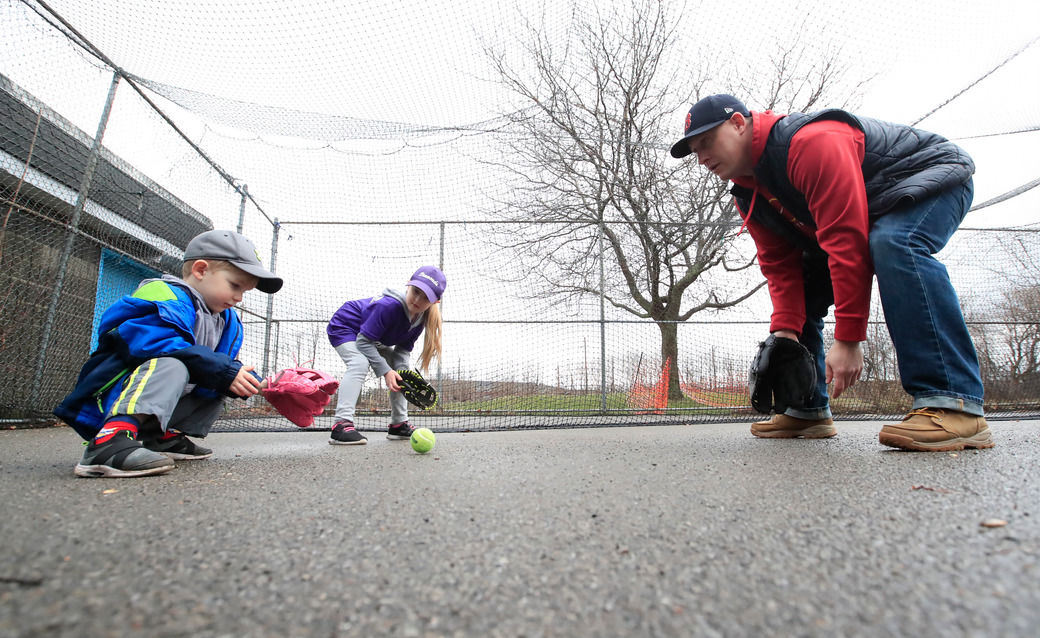 Sean Sullivan, who has spent most of his life playing or coaching baseball at Shoshone Park, plays ball with daughter Riley, 8, and son Shane, 4. (Harry Scull Jr./Buffalo News) 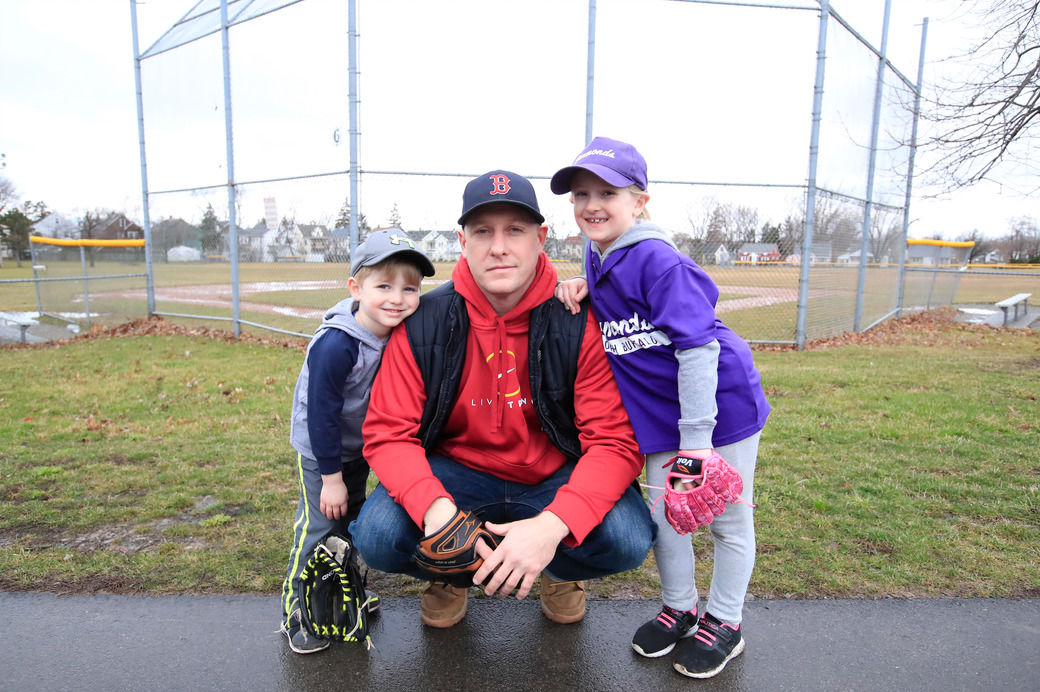 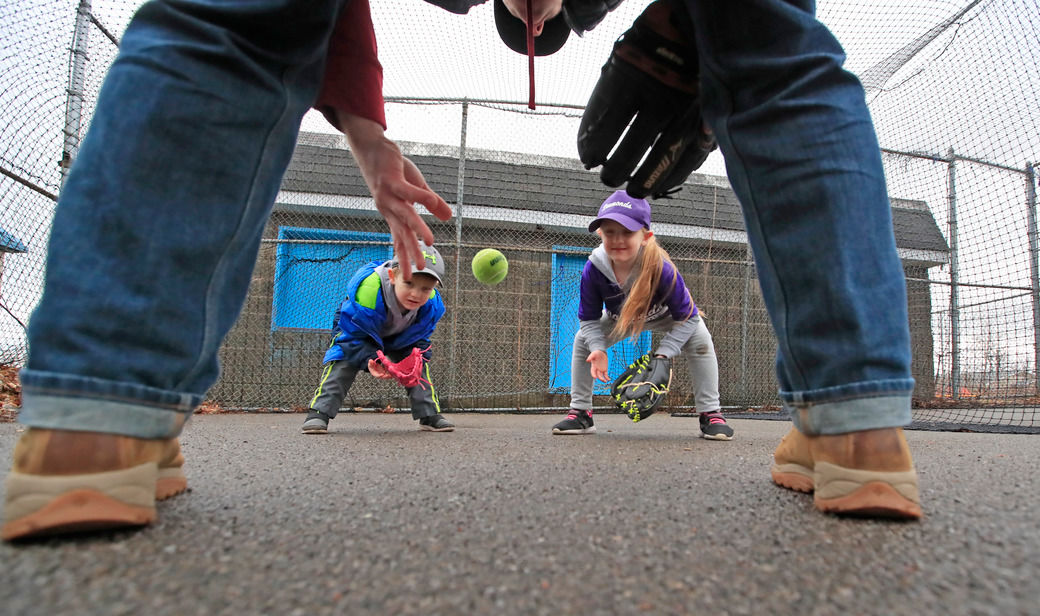 The moment came early this year for Sean Sullivan. A mild day in March spoke to him of a new season, sending him toward a ritual he embraced in childhood, when he kept his baseball cap and glove beneath a bench near his family's front door.

Not long ago, Sullivan fished out gloves for Riley and Shane, his young daughter and son, and he led them into their North Buffalo yard to play some catch.

In a city all but shut down by a virus, Sullivan vows that baseball – even as a solitary pastime – will continue.

He finds it impossible to imagine the coming months without it. At 38, he still plays softball with his buddies in Delaware Park, meaning he has competed at some level of organized ball from the days when he was in the first grade – a tradition, to his disbelief, that might disappear this year.

Sullivan spent much his childhood signed up with the Hertel North Park Youth Baseball League, affiliated with the Cal Ripken division of the Babe Ruth League, where the kids who take part use a far more simple name. They say they "play at Shoshone," meaning Shoshone Park, in the same neighborhood where Sullivan and some of his closest boyhood friends still live.

He and his buddies grew up as throwbacks, carrying on ancient baseball traditions. Even two children were enough for fierce games of "running bases" or Wiffle Ball – the well-loved version of baseball with a plastic bat and ball. They graduated into full-blown pitcher-batter duels in school parking lots, using tennis balls, strike zones marked with chalk and anything available for bats, including broomsticks.

As soon as they were old enough for their parents to say it was OK, they would slip their gloves onto bicycle handlebars and pedal off for entire days of pickup games at Shoshone, using "ghost runners" if they only had a few guys.

Sullivan started organized ball when he was 6. He finally "aged out" as a teenager from a Babe Ruth League travel team at Shoshone, about the same time that he was serving as a captain of the baseball team at Hutchinson Central Technical High School. After graduating from SUNY Buffalo State, he started coaching a Hertel North Park youth team that included Colin Sullivan, the next-closest in a line of four younger brothers.

He met Jaclyn, his future wife, on a visit to Checkers, a tavern not far from the park. They eventually married, in no small part because of a shared commitment to baseball and the Boston Red Sox. Indeed, the Red Sox won their first World Series since 1918 on the year's anniversary of the day the couple met.

If you need an example of true devotion, consider this: On a visit to Fenway Park, Jaclyn helped her husband carry home a handful of dirt he managed to grab from the field.

He saved it by pouring it into her purse.

They are now raising their kids near the park central to Sullivan's childhood, joined by the annual return of springtime rites they never thought could go away. Their daughter Riley, at 8, is a veteran of four seasons at Shoshone, while their son Shane, a 4-year-old, was supposed to play T-ball this year for the first time.

To Sullivan, baseball at the park is as much a part of spring as the April day when the leaves burst from the maples.

This time there is no such guarantee. Baseball, like everything involving significant groups of human beings, is shutting down – from the big leagues to community youth leagues.

Amid the "flattening-the-curve" response to the Covid-19 virus, Don Morris, president of youth baseball at Shoshone, said the league is on a kind of perpetual “two-week pause.” League officers will keep evaluating – at two-week intervals – to decide whether there is a realistic point at which they might start up.

Morris is optimistic, even though schools are closed and civic leaders have no way of guessing when children might again gather safely. He remembers seasons – including last year – when rain and snow all but wiped out weeks of practice in April. Hertel North Park had planned on a May 9 opening day, and Morris said – if push came to shove – the season could begin then with a minimum of practice, because every team would  be in the same competitive shape.

If May 9 is too soon, administrators will accept life as it is and play a shorter schedule, unless that choice also becomes impossible. Morris has been involved with the league for 38 years, and he anticipates that 700 children will sign up to play at some level.

"We’ve got our fingers crossed,” he said.

Every youth sports organization is facing that same uncertainty. Little League International, the best-known of them all, has already recommended that its member leagues hold off on practice or games until at least May 11.

Sean Sullivan embraces the decision at Shoshone to shut down and wait it out. He works as a building inspector for the City of Buffalo, and his priority – above all else – is keeping his kids safe. Still, it remains surreal to envision a spring without organized baseball.

Jaclyn helped him coach and kept score for his teams until the couple stepped back for a while after the birth of their children. They are ready in some way to become involved again, even by helping to sell freeze pops or Gatorades behind the counter of the snack bar, which seems more like a pleasure than an obligation once you contemplate a spring with no organized baseball at all.

“Organized,” however, does not mean the sport must disappear. Sullivan goes back to a time when he found ways to play all day, sometimes by himself. His childhood home had masonry outdoor steps, and he was a devotee of a game many of us remember well. He would fling a tennis ball against the steps with as much force as he could, and then try to catch the ball when it came speeding back.

If it hit the top step it transformed into a hot grounder, and the middle step turned it into a burning line drive, and an errant throw would send it backwards to leave a round muddy ring upon the house, a situation tolerated by generations of baseball-loving Western New York parents.

In North Buffalo, a tribute to a man who mentored ballplayers

On boring days, a child with a vivid imagination could turn that step-ball ritual into an entire nine-inning game involving make-believe big-leaguers, a solitary option that becomes a potential 21st century distraction on these long, strange, quiet days. The Covid-19 restrictions mean the Sullivan kids will not be running around the neighborhood with a crowd of friends; instead, they will need a creative emphasis in everyday play.

So Sullivan has already joined Riley and Shane in the yard to play some catch, which he sees as a far better choice than sitting around for weeks or months inside the house, staring at a screen.

“I’m a firm believer in getting them outside,” Sullivan said, realizing some of his greatest childhood memories of the game involve times when he played without adults or formal rules.

With that in mind, he makes this vow for his kids.

“Whether the season goes on or not,” he said, “they’ll still have baseball.”

Sean Kirst is a columnist with The Buffalo News who wonders if you have your own childhood memories of "wall ball," running bases and other informal and sometimes solitary ways of playing baseball. Email him at skirst@buffnews.com or read more of his work in this archive.

Blue Jays are back: Questions and answers on MLB's return to Sahlen Field

The Toronto Blue Jays' first game at Sahlen Field in 2021 will be June 1 against the Miami Marlins and, unlike last year, you can be there.

Opening Day in Buffalo for Blue Jays will be June 1 vs. Marlins

The Blue Jays and Bisons expect to be able to sell around 4,300 tickets for the games and maybe more as the season moves along.

Tickets will be sold in pods of four with a minimum of 6 feet of space.

Back home at last in ... New Jersey? Bisons ready to start a season unlike any other

Everyone agrees this is one strange situation. But they also agree that the best part is they'll be playing baseball again Tuesday night.

Hear that Bison Thunder: A solid opener in Trenton as Herd stampedes to a win

The Bisons/Thunder were on top of their game in all phases in their season opener against the Worcester Red Sox, scoring two runs in the first and loping home with a 6-1 victory before a socially-distanced sellout crowd of 1,526.

Blue Jays manager on Sahlen Field: 'We're going to make it into our home'

"Buffalo has been good to us. It's been good to me. We had a good time there last year," manager Charlie Montoyo said on his pregame video call Wednesday from Oakland

Erik Brady: Familiar former voice of Canisius College pitching in as voice of Bisons in Trenton

Think of him as Buffalonian and Trentonian all wrapped into one: A member of the Thunder Hall of Fame who got his start covering pro sports in Buffalo while still a student at Canisius College.

Bisons Notebook: Nate Pearson finds his mark in the opener

Toronto's No. 1 prospect allowed one run and struck out eight in 3 2/3 strong innings to give the Herd a solid report to send to Toronto brass from its season opener Tuesday against the Worcester Red Sox.

The Bisons open their "home" season in Trenton, N.J. on Tuesday night vs. the Worcester Red Sox.

Bisons notebook: Nate Pearson on the mend, looking for return to Jays' rotation

Sean Sullivan, who has spent most of his life playing or coaching baseball at Shoshone Park, plays ball with daughter Riley, 8, and son Shane, 4. (Harry Scull Jr./Buffalo News)