After starting season in Dunedin, Blue Jays CEO says Buffalo is 'best alternative' for 2021
0 comments
Share this
Support this work for $1 a month
Mike Harrington

The Toronto Blue Jays announced Thursday that their first two homestands of the 2021 regular season will be held at their spring training home, TD Ballpark in Dunedin, Fla.

After that, the team's status is once again up in the air, but Sahlen Field in Buffalo is squarely on their radar to be their home for a second straight season.

As Bisons enter new league, return of Blue Jays to Sahlen Field is not out of the question

The new league will include 12 other members of the former International League, four teams from the former Pacific Coast League and three new teams to Triple-A.

"With all candor, we're kind of looking at the circumstance that the alternatives for our season lie in some combination of Dunedin, Buffalo and Toronto," Blue Jays president and CEO Mark Shapiro said on a video call with reporters Thursday morning.

Shapiro said the club has spent weeks pondering multiple facilities, both at the major- and minor-league level. Studies have been done on climate, travel, facilities and ability to implement Covid-19 protocols.

Shapiro said the conclusion after those meetings was clear. "We ended up back where we were last year: Buffalo does present both the most familiar and the best alternative for us playing in the AL East with the space we need."

I asked #Bluejays President/CEO Mark Shapiro about logistics in Buffalo and here are his thoughts on “a more lasting and permanent solution” for Sahlen Field compared to 2020. #Bisons pic.twitter.com/beTgg44jVK

After playing their final 26 home games in Buffalo last season at Sahlen Field, the Blue Jays are again pondering their Triple-A stadium as their home for 2021 if they continue to not get clearance from the Canadian government to play in Rogers Centre in Toronto due to the pandemic.

And unlike last year, it's likely there would be some fans at the games in Buffalo. Under New York State regulations recently announced by Gov. Andrew M. Cuomo, the 10% figure for arenas and stadiums means around 1,700 fans could be in Sahlen Field for each game.

Shapiro said the Blue Jays would be interested in selling tickets but would work with state, county and city authorities on that process if they decided to play here.

The Canadian government remains unwilling to allow MLB teams to go back and forth across the border to travel to games in Toronto. Shapiro said with the current state of the virus and vaccines in the early stages of being administered, the Blue Jays have yet to even ask the government about clearance to play games in Toronto.

"Next to the health and safety of our fans, players, and staff, the Blue Jays’ top priority is returning home to play on Canadian soil as soon as it is safe to do so," the club said in a statement issued Thursday morning. "The club has been actively working through plans for what a safe return to Rogers Centre could look like, while also scenario planning alternatives. The Blue Jays will re-evaluate the situation and those circumstances will dictate next steps following the first two homestands."

Like spring training, the Blue Jays will have 15% capacity for their regular-season games in Florida.

After the series vs. the Braves, the Jays have a 10-game road trip and return home – wherever that ends up being – for a 10-game stand May 14-24 against Philadelphia, Boston and Tampa Bay.

The Blue Jays went 17-9 here last season and claimed a wild-card playoff berth, their first trip to the postseason since 2016. They finished 32-28 in the abbreviated season but the 2021 campaign is set to be a standard 162-game schedule that opens on April 1 with the Jays in New York to play the Yankees and stretches all the way to an Oct. 3 season finale at home against the Baltimore Orioles.

The Blue Jays played only AL East and NL East teams last season but are fully traveling throughout the AL this year and playing all teams home and away. Their interleague games are again against the NL East.

If the Jays choose to play again in Buffalo, Shapiro said the Bisons would be displaced for the time the major-league club is here. The Herd's 2021 schedule was announced Thursday afternoon and it opens with an April 6 home game against Rochester and closes on the road Sept. 19 in Rochester.

"We're not just going to kick the Triple-A team to the street," Shapiro said. "We've worked with (Rich baseball president) Mike Buczkowski and the Buffalo Bisons to think very carefully. That's our Triple-A team and we certainly want them to be in the best situation possible. If we end up moving to Buffalo at some point during the season, we'll find a very good home for our Triple-A team as well."

"The Bisons were honored to host the Toronto Blue Jays during a memorable 2020 season, and while contingency plans for 2021 at Sahlen Field have been discussed, no final decision has been made," the Herd said in a statement Thursday. "No matter where the Blue Jays play this home season, we look forward to welcoming future Blue Jays to Sahlen Field on their road to the big leagues.”

The Blue Jays and MLB did a multimillion dollar upgrade on the ballpark in three weeks to get it ready for the Aug. 11 opener against the Miami Marlins. Many of those items were temporary solutions and Shapiro said the Blue Jays would be looking for "a more lasting and permanent solution that our Triple-A players can benefit from and the Buffalo team can benefit from moving forward."

Specifically, Shapiro said if the Blue Jays came to Buffalo this year, they would move the bullpens off the playing field, provide better long-term batting facilities and would seek to move weight room and workout areas off the main concourse because fans would now be in the ballpark.

After more than 19 months off, the Buffalo Bisons are finally scheduled to get back on the field April 6 when they host the Rochester Red Wings.

Analysis: Will the Blue Jays return to Buffalo? Maybe, but it's complicated

There are a lot of moving parts to this situation. And it is not nearly as simple as last season, when the Blue Jays played 26 games here in a 46-day stretch in August and September.

The Editorial Board: Let’s roll out welcome mat for Blue Jays, whose return would be enhanced by fans

Our loyal fans of minor league baseball deserve this taste of the big leagues.

The new look of Triple-A baseball

Here is the new alignment of Triple-A announced Friday by Major League Baseball.

As Blue Jays put back Sahlen Field the way it was, Bisons ponder 2021

The Blue Jays' upgrades to Sahlen Field were vast and the Bisons will derive long-term impact from items such as the installation of new grass in the infield and its foul territories, and brighter stadium lighting.

Column: Blue Jays have come and gone. When will we see baseball again?

The final out came at 5:59 p.m. Sunday. Now we wait to see when Sahlen Field will again come back to life. 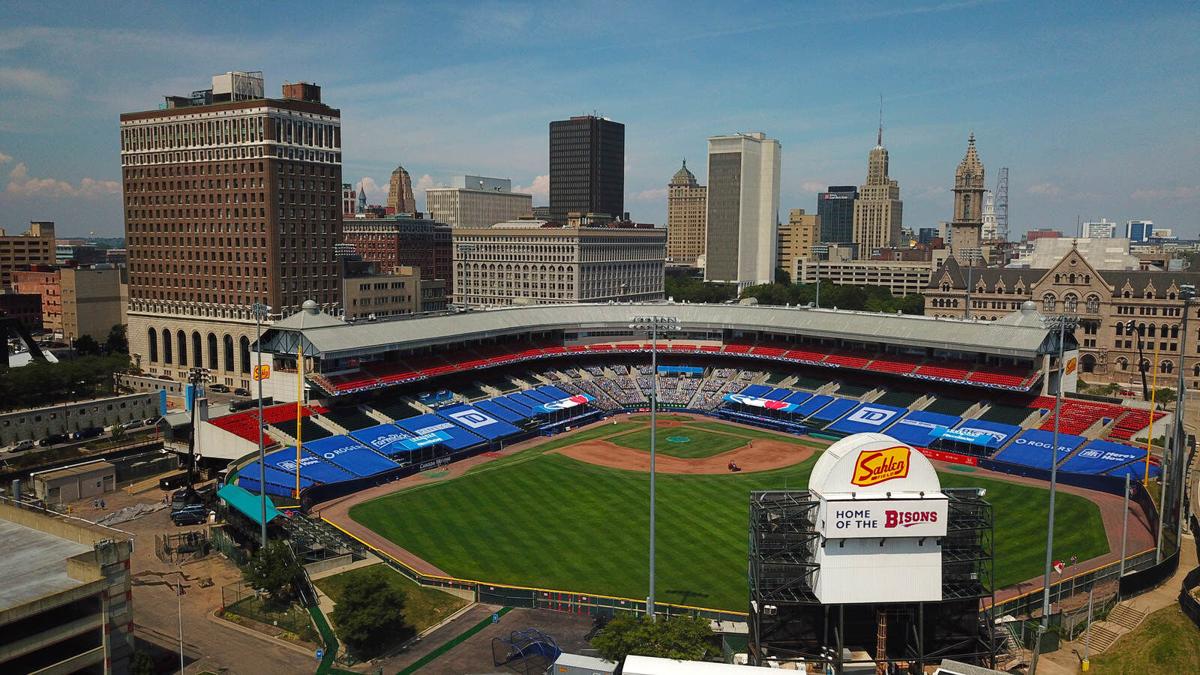 Sahlen Field was reworked to be the temporary home of the Toronto Blue Jays. 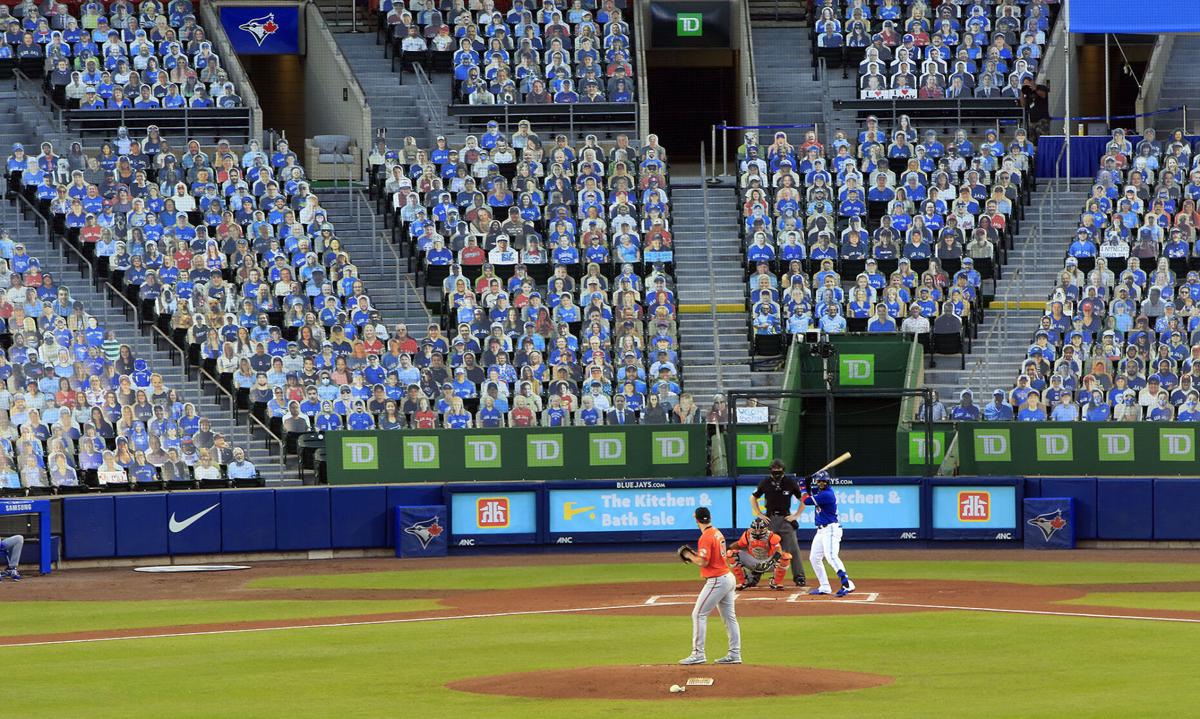 Cutouts fill the seats at Sahlen Field as the Toronto Blue Jays play the the Baltimore Orioles on Sept. 26.