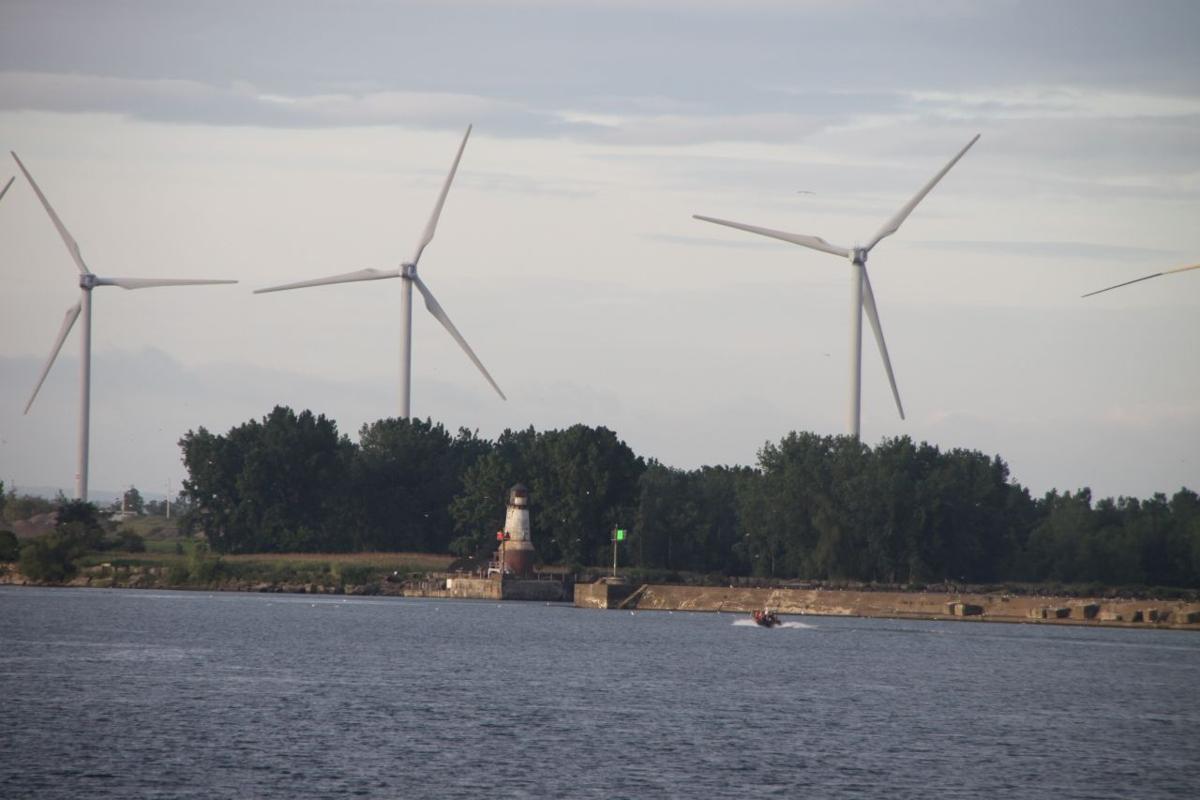 Turbines off Lake Erie. (Bill Hilts, Jr./Special to The News) 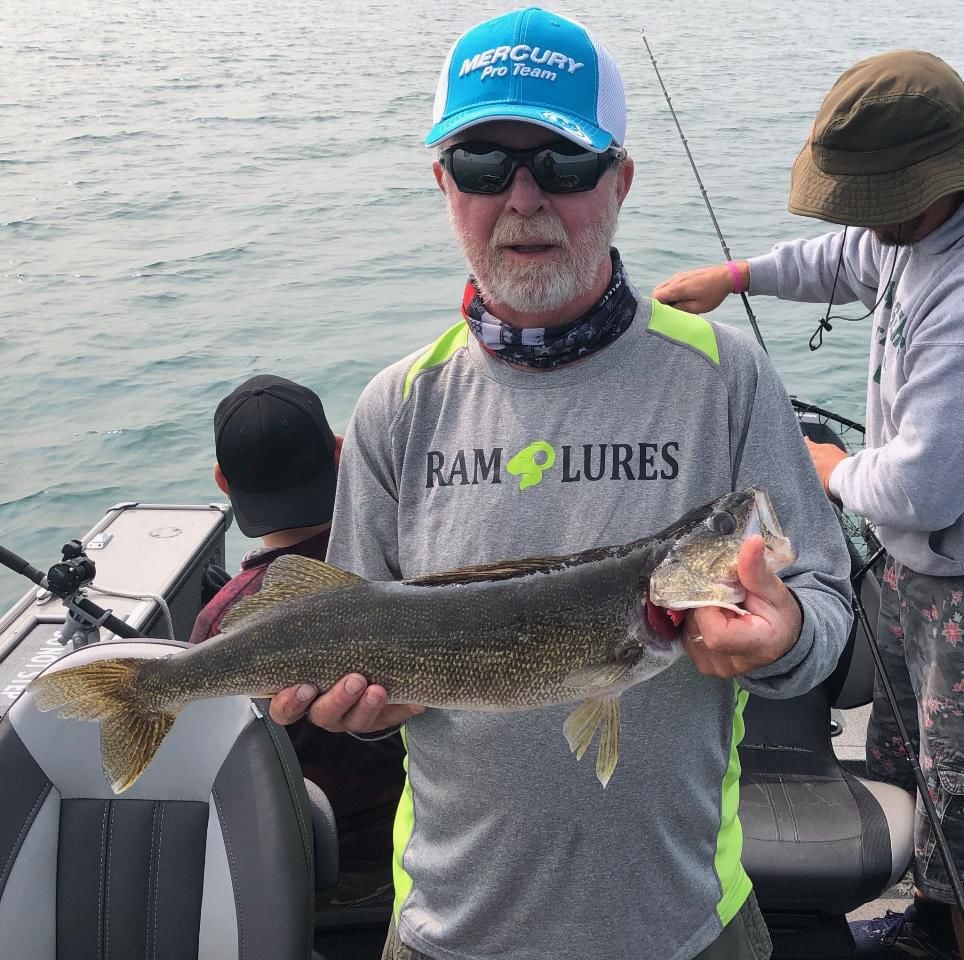 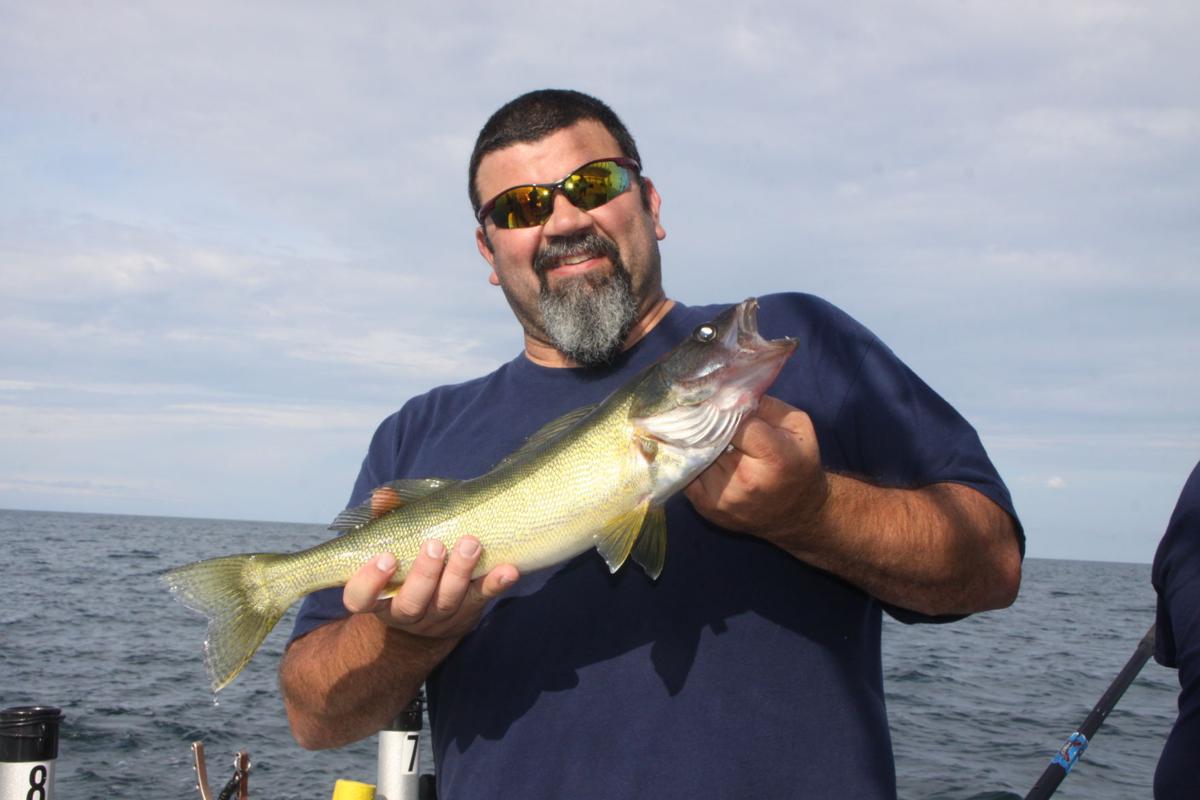 It looks like the wind is picking up … and it’s not from Mother Nature.

“We’re upset that some people want to take a perfectly good lake (Erie) and destroy it by erecting 50 400-foot high industrial wind turbines from Lackawanna to Dunkirk in the water,” said Capt. Jim Hanley of Angola. “It would negatively impact a lot of the great fishing areas. This project is unprecedented in freshwater. There are too many unknowns. For example, we don’t know what effect ice will have on these structures during a severe winter in the lake.”

“When it comes to birds, these turbines will be in the middle of a huge migration path for a wide variety of bird species,” he said. “Just a few miles away is the Niagara River Corridor, internationally recognized as an Important Bird Area. It attracts 19 species of gulls from around the world. How will it affect the bald eagles that are starting to repopulate along the lakeshore? Has anyone answered these questions?”

Last week, the state’s Department of Environmental Conservation released its 2017 Statewide Angler Survey, showing that Lake Ontario and Lake Erie were Nos. 1 and 2 in relation to economic impacts and numbers of anglers in the Empire State.

“Now a wind turbine project proposal comes along that will harm the very resource we are touting,” said Hanley, a charter captain for over 40 years on the lake.

“Lake Erie is simply too small to sustain any industrial offshore wind project,” said Rich Davenport of Tonawanda, who is active with several sportsmen’s groups, such as the Erie County Federation of Sportsmen’s Clubs and the Western New York Environmental Federation. “The towers will displace water currents for quite a radius around each turbine, impacting nearby spawning shoals (even if sited away from spawning areas, you cannot avoid the current change), coupled with the massive amounts of infrasound, or low frequency noise, each turbine will generate while operating.”

“Studies have shown what infrasound does to fish and other life, but, unlike the oceans, which are vast, Lake Erie is only 227 miles long, and 12 miles wide at Sturgeon Point, where the intended siting would be – no spatial avoidance opportunity, and too small for random factors to come together to create the same spawning grounds as those found here.”

Many of these same arguments were brought up 10 years ago when the New York Power Authority was considering a Great Lakes Offshore Wind proposal. It never went anywhere.

“We support the need for green energy,” says Mike Boicmenu of Brant. “However, let’s take a hard look at the business case for it.”

Boicmenu has worked in the power industry for the last 50 years as an independent consultant with companies like Niagara Mohawk. “What are the costs and are there other alternatives that could be considered?”

There is support for offshore wind projects, in general, should they come to fruition. Ellen Banks with the Sierra Club Niagara Group, part of the Atlantic Chapter, pointed out the benefits of wind energy in the overall scheme of things. She noted that the group wouldn’t endorse anything like this until the environmental studies have been completed through U.S. Fish and Wildlife Service and the Department of Environmental Conservation.

“We are finding out that wind turbines are not as harmful to birds because they become educated,” said Banks. “The bases of the turbines are prefabricated and do not harm the environment. In other areas like Block Island in Rhode Island, the bases created nursery habitat for the fish.”

She also noted that a wind farm off Cleveland was stopped just recently due a change in political leadership.

“We are fighting for the Great Lakes. We do not want to see any harm come to them. However, we must come up with a compromise to alleviate our dependence on fossil fuels.”

Boicmenu pointed out that New York’s Clean Energy Standard calls for 70 percent of the Empire State’s electricity to be provided from renewable energy sources by 2030. It helps put this into perspective and why this is happening.

“The costs for an off-shore wind project are 275 percent higher than the average costs of other renewable energy,” says Boicmenu. “Annual operation and maintenance considerations are 211 percent higher than the average renewable costs. The most current information that we have from New York Independent System Operators is that the supply price would be roughly $20 per megawatt hour. Off-shore wind pricing right now would be in around $98 per megawatt hour, five times the cost. If it wasn’t for federal incentives, these companies like Diamond Wind wouldn’t even consider building them.”

Another major concern of Boicmenu deals with the harm to our environment. “We take the hit on our natural resources and the energy generated gets sent downstate. There haven’t been enough studies done. There needs to be a detailed environmental impact statement. They (Diamond Wind) should also develop an integrated resource plan to determine the most cost-effective approach to meeting our energy needs.”

Hanley was quick to chime in when Boicmenu referred to environmental impacts. “How bad will it be once the companies start stirring the sediments up in the bottom of the lake?” said Hanley. “It used to be essentially a dead lake, due to all of the pollution.”

“Jeopardizing the life in the lake, which helps keep the waters of life – our fresh water – healthy for us to drink and water crops with, to realize nothing in the form of usable electrical energy, is the very definition of folly,” said Davenport.

Davenport, through his role with the Erie County Federation of Sportsmen’s Clubs, worked on an extensive, all-encompassing resolution (five pages' worth) opposing all industrial wind turbine development in the Great Lakes, requesting that the New York State Conservation Council call for a permanent moratorium in New York’s Great Lakes waters. It was unanimously approved by the club in November 2019 and it is in the hands of the New York State Conservation Council to be voted on at its spring meeting.

The council is the state’s umbrella organization for conservation and sportsmen-related issues, uniting county federations from around the Empire State. The full-court push is on to oppose any development in or on one of this state’s greatest natural resources, our Great Lakes.

A group called Citizens Against Wind Turbines in Lake Erie has been formed and a Facebook page created to keep people apprised on what’s happening. So far, nearly 1,800 people have shown support on the social media site and thousands have signed a petition to keep wind turbines off the lake.

The NFL plans to play the Black national anthem before Week 1 games. Hear the anthem here.

Additionally, the league is working collaboratively with players to recognize victims of systemic racism throughout the season.

Inside the Bills: How Sean McDermott is preparing for a training camp unlike any other

In a normal NFL offseason, players and coaches are enjoying some down time right now. The early part of July is usually the lone quiet time on the calendar. Nothing about this offseason, of course, has been normal or usual.

Bills roundtable: Who will be a surprise cut in training camp?

News' Bills reporters Vic Carucci, Jay Skurski, Mark Gaughan and Jason Wolf will tackle some of the major topics in our series of Bills roundtable.

Turbines off Lake Erie. (Bill Hilts, Jr./Special to The News)