Subscribe for $1
Read Today's E-Edition
Share This
Scattershots: Start of September brings lots of events, plus remembering Harry
0 Comments
Share this
Support this work for $1 a month
Bill Hilts Jr.

Choose sessions from numerous outdoor activities such as archery, air pistol, basic shotgun, basic rifle, basic pistol skills, advanced pistol, kayaking, tomahawk/knife throwing, shotgun breakdown, and more. Four sessions will be lined up throughout the day. Cost is $75 for the day. Call Colleen Gaskill at 628-9023 for more information. You must be preregistered.

All Deer Shoot at Allied Sept. 11

Get ready for the upcoming archery season by participating in the fifth annual All Deer Shoot at Allied Sportsmen, 12846 Clinton St., Alden, on Sept. 11 from 8 a.m. to noon. Fifteen targets will be placed in various hunting scenarios that consist of mostly deer, but there might be an elk, red stag, or even a Sasquatch. All targets will be 35 yards or less. Range finders are encouraged. No broadheads may be used. Cost is $15.

A flea market with archery/hunting/outdoor equipment also is scheduled for the same day. Tables will be available in the clubhouse. For more information contact John Floriano at 725-5822 or Kevin Ulrich at 430-1059.

Ten X Shooting Club of Lancaster has announced that its popular Junior Shooting Program will resume Sept. 16. This is for junior shooters ages 9 to 20. The club is located at 853 Ransom Road, Lancaster. First-time shooters should arrive at 6 p.m. for firearms handling instructions. Shooting begins at 6:30 p.m.

Air rifles for 9 and up; .22lr for ages 12-20. Everything is provided by the club. Cost is $5 per night, which includes ammo. Membership to the club not required. For information, visit tenxshootingclub.com. The next session is set for Oct. 7.

Registration starts at 9 a.m. and shooting will begin at 9:30 a.m. Ammunition will be available on a limited basis. For more information, contact Ron Wight at 785-5942. Youth are asked to preregister at https://forms.gle/BN1rzut8iXajDMwWA.

The long awaited Bassmasters Top 100 for 2022 is out in the latest issue of Bassmasters Magazine, and Eastern Lake Erie and the adjoining Upper Niagara River cracked the Top 10, coming in at No. 8 for the entire country. It specifically states that it’s within a 30-mile radius of Buffalo. It isn’t by chance that our area received its high ranking. Bassmasters editor James Hall visited our area in May thanks to a media event conducted by Destination Niagara USA. The fish did the rest. Due to high winds on Lake Erie, they were forced to fish the upper river as an alternative. Casting jerkbaits in various locations with Capt. Frank Campbell, they at one point hauled in 70 smallmouth bass in 100 casts – catching fish up to 5½ pounds.

No. 1 on this year’s list is the amazing St. Lawrence River (which also included Eastern Lake Ontario) after the incredible Elite Series tournament that was held this summer. On the final day, seven of the top 10 anglers weighed in more than 25 pounds of bass for five fish and the overall winner, as well as second place, weighed in more than 100 pounds of smallmouth for four days – for the first time ever in an Elite Series event.

A little more than a year ago, we wrote a story about Capt. Ned Librock, of Pendleton, and his Catching Dreams program that takes kids and young adults with cancer out fishing as a type of therapy. We featured a 7-year-old boy by the name of Harrison “Harry” Hazlett, of Olcott. As he battled cancer, his respite was fishing. He went fishing every chance he could.

On Tuesday, young Harry lost his fight against cancer as he passed away in his sleep. Our thoughts and prayers go out to the family during this most difficult time. Let’s hope he is now fishing and catching a big one on every cast, letting out that infectious laugh as he reels it in. He made this world a better place to be. He will be missed.

Working to reel it in

Bring in the prize

Looking forward to some fun

The end of a great day

Saturday is a free fishing day as the nation celebrates the 50th anniversary of National Hunting and Fishing Day.

“The first day of the tournament, the lake was flat,” Brodnicki said. “(That's) something rare on the Great Lakes and appreciated by the 44 boaters who got knocked around during two of the three practice days.”

The nation will honor the country’s hunters, fishermen, trappers and shooting sports enthusiasts on Saturday.

There is plenty of action going on in our open Great Lakes for a variety of species.

The LOC Derby is over, ending the competition season for open lake salmon and trout trollers on Lake Ontario.

Here's a look at outdoors sporting events scheduled through Oct. 7.

Outdoors calendar (through Sept. 25): What to see and do in WNY

Here's a look at outdoors sporting events scheduled through Sept. 25.

Included in the discussion will be an update on Atlantic Flyway waterfowl populations, upcoming duck and goose seasons, and water level status for many of the impoundments.

Here's our list of events for outdoors enthusiasts through Oct. 16. 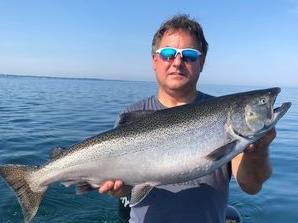 Scott Rohe, of Cheektowaga, caught this salmon while trolling in front of Olcott last week. 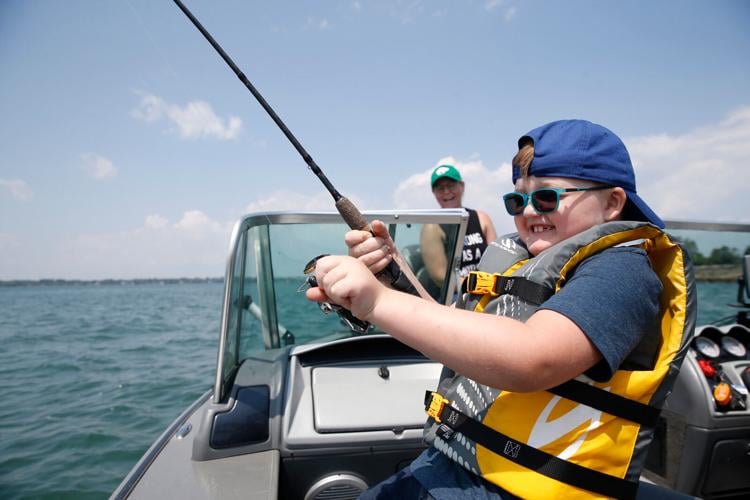 Harry Hazlett, 7, gets another bite and struggles to reel in a 7-pound fresh water drum. Behind is his mom, Dayna Hazlett. Ned Librock runs Catching Dreams Charters, a nonprofit that provides free fishing adventures for children and young adults battling cancer.