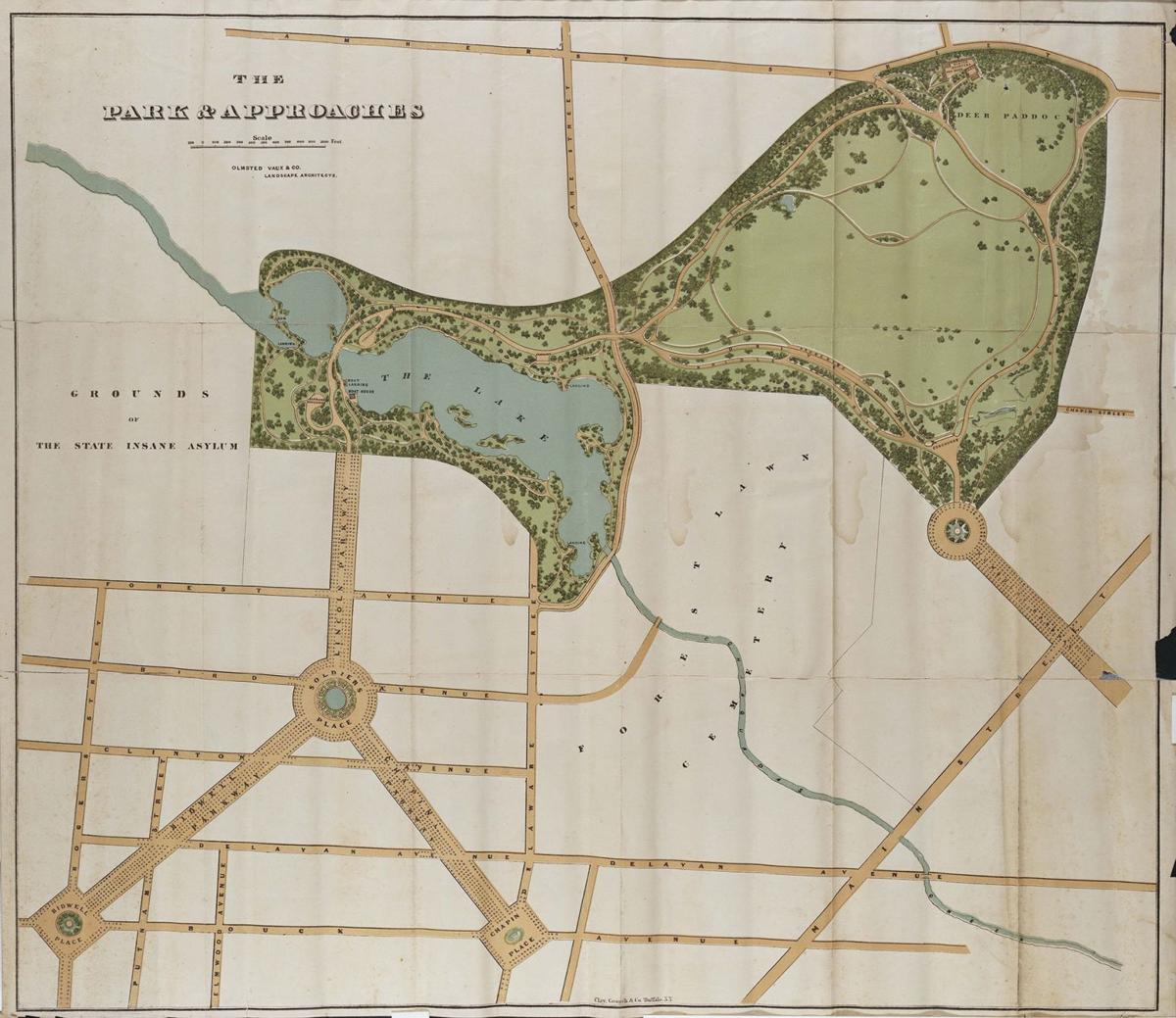 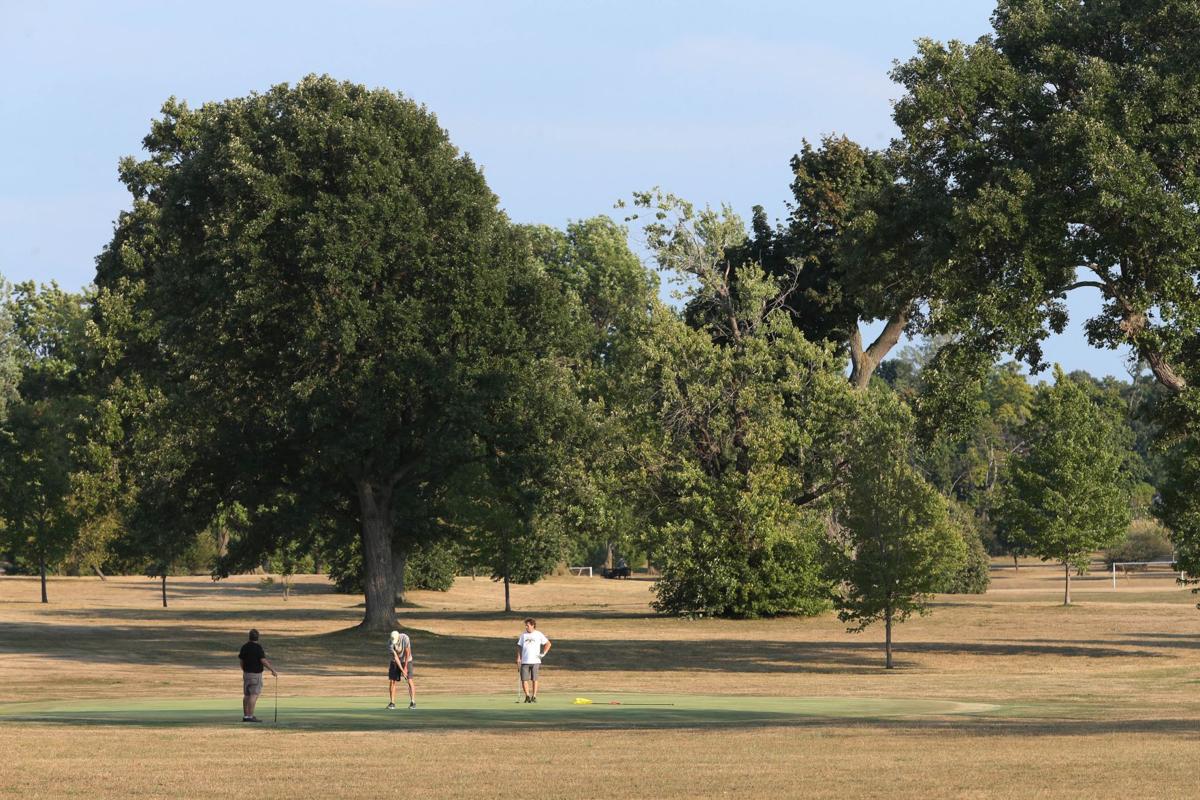 The Meadow at Delaware Park in Buffalo is abuzz with activity seven days a week throughout the year. Photos on a typical day at the beloved Olmsted park, Thursday, Aug. 4, 2016. (Sharon Cantillon/Buffalo News)

SPECIAL TO THE NEWS

In the heart of Frederick Law Olmsted’s Delaware Park, amidst rising rose bushes, shimmering lake water and a parkway that bears his name, sits a statue of Abraham Lincoln. Of the 225 Lincoln statues throughout the United States, it’s one of only a handful that depicts the “frontier” Lincoln: young, strapping, independent and forward looking, like America itself.

Etched in the stone base of Lincoln’s statue, created by sculptor Bryant Baker and installed in the park in 1935, is an excerpt from James Russell Lowell’s 1865 “Commemoration Ode.”

“For him her Old-World moulds aside she threw,

And choosing sweet clay from the breast

Of the unexhausted West,

In some measure, Lowell’s words of Lincoln also describe Olmsted. The world’s finest landscape architect, Olm-sted’s animating idea was simple but revolutionary: nature not only lifts the human spirit, but strengthens it. And regardless of social or economic status, every human being has a right to share in that experience. Here in Buffalo, along with his design partner, Calvert Vaux, Olmsted employed that ideal to craft a system of parks and parkways that permitted residents to move throughout built-up urban enclaves and still feel the wonder of natural life.

And Lowell’s words also evoke the story and sense of place that is Buffalo: Native Americans who first settled along the “Beau Fleuve,” the “beautiful river” that is Niagara; hardscrabble workers who dug the Erie Canal, the engineering feat of its age, as it connected the world; 19th century women and men who linked an underground railroad so those in bondage might be free; sons who left high school during world war to cross the Atlantic and save civilization; and fathers who blackened their lungs in steel mills, scooped grain in elevators and went to early graves in the course of forging modern America.

Hovering above this Buffalo narrative, in songwriter Paul Simon’s lyrics, are “angels in the architecture,” including Louis Sullivan, H.H. Richardson, Frank Lloyd Wright and E.B. Green. And supplying the natural canvas for this uniquely Buffalo and wonderfully American experience is Olmsted, and the pastoral settings he brought to life.

Today, 140 years after Olmsted gave birth to his parks, and less than a decade into Buffalo’s rebirth, his creations are in need of assistance. Time has chosen our generation to ensure the future of Olmsted’s ideas by reaching back to restore his original notions, and thereby usher these beloved spaces into a new age.

For some 50 years, since I was a student at Nichols School on Delaware Park’s north edge, to last weekend as I ran on the ring road, I’ve been lifted by Olmsted’s parks. Like many Buffalo residents, I’ve often pondered the presence of a golf course in Delaware Park (I don’t play golf; when I had a life, I raced sailboats), and wondered how to improve it for inner-city residents who play on and enjoy it. In addition, I’ve given thought to our community’s shared goal of restoring Olmsted’s original 1894 arboretum (“tree museum”) in South Park, in which he meticulously selected and mapped out some 2,300 species of trees, shrubs, plant and flora adjacent to the Botanical Gardens. And running through Delaware Park on a brisk February morning two years ago, I got an idea, one I’ve been working on ever since.

I researched Olmsted’s original plans for both Delaware and South parks, aided by gifted archivists at the Olmsted National Historic Site in Brookline, Mass. I came across a note that Olmsted wrote late in life, expressing his desire that the arboretum be “a means by which the study of botany be stimulated.” The note inspired the centerpiece of my plan – education.

Interviewing more than 70 Buffalo residents who regularly play the Delaware Park golf course, I learned how it has evolved into a cherished recreation space for people with neither resources nor means to access private golf facilities. I consulted with architectural scholars at the University at Buffalo School of Architecture and the Harvard Graduate School of Design concerning the future of public spaces. And I visited the Wall Street financial community, seeking guidance in the process of raising funds. My goal was to devise a project that fused restoration, education and recreation in a way that attracts funds from beyond Western New York, thus permitting the Buffalo Olmsted Parks Conservancy, steward of these treasures, to accomplish several long-term goals.

Finally, through the assistance of my brother, Vincent, an executive in a Jack Nicklaus-affiliated company in Russia, I got the chance this past spring to present my plan to the renowned champion. I visited Nicklaus, the world’s leading golf course designer, at his Florida offices. His first mistake was letting me in the door. Having read his memoir in preparation, I knew that Nicklaus possessed great curiosity and even greater empathy, which responded to my description of Buffalo’s past failures and the current plight of its inner-city youth. I asked Nicklaus to do something he’d never done before, here in America’s fifth-most impoverished city, to further our economic resurgence. I asked him to perform his services at cost, and to help me raise private funds to accomplish it all. Demonstrating why his stature in the American imagination ranks so high, Nicklaus did not hesitate, and immediately said yes. So here’s my plan:

• Construction of an education and employment center, to imbue the arboretum with an education component, in accordance with Olmsted’s wishes, by providing inner-city youth with skills in environment-related disciplines, from botany and agronomy to land and water conservation.

• John Thornton, co-chairman of the Brookings Institution in Washington, D.C., and I, with the assistance of Nicklaus, obtain private funds to construct and maintain each of these new public amenities, including establishment of a perpetual trust to re-create and maintain the arboretum. As a result, this plan requires no investment from the Olmsted Conservancy, the City of Buffalo or taxpayers.

The recent generous gift to the Albright-Knox Art Gallery expansion project, made by Buffalo-boy-made-good Jeffrey Gundlach, dramatically illustrates several realities, including the fact that when you do something that pleases both your Mom and your home town, you’ve done something spectacular.

Gundlach’s very existence reflects a new reality offering itself to New Buffalo. Old Buffalo leaders apply zero-sum analysis to local projects, asserting that any endeavor that attracts financial support – creating our Medical Campus or restoring Darwin Martin – subtracts funds from other worthy undertakings – upgrading Kleinhans or establishing our African-American Heritage Corridor. That analysis rests on the scarce private capital that exists in our region, and relative lack of affluence capable of having the magnitude of effect such as Gundlach’s magnificent gift.

But then came the internet age, creating untold wealth in virtually every corner of America but Western New York. Among those who succeeded were the more than 290,000 people, including Gundlach, who left Buffalo Niagara during our four decades of economic decline. As our city turns around, longtime Buffalo lovers such as Gundlach feel that, for perhaps the first time in their lifetime, contributing to Western New York’s future is a worthwhile endeavor. But only if the proposed civic project moves forward with dispatch and purpose.â©During the several months I’ve examined the landscape of potential donors to this project from around America, I found individuals and institutions keenly interested in an effort to strengthen Buffalo’s Olmsted legacy, create new public amenities and bind them with an education center devoted to employing inner-city youth.

While each component of this proposal is equally important, from restoration of Olmsted’s arboretum to creating golf amenities worthy of our city’s residents, my plan’s central purpose is to help improve the lives of Buffalo’s minority youth. Buffalo’s summer of 2016 tragically took even more lives through the brutal artillery of gun violence, heightening still the imperative that every private citizen and public project do something to help end this scourge. And any contribution that my proposed education center may make toward that end renders this endeavor all the more relevant to Buffalo and its future.

My fundraising partners and I have set a goal of obtaining our estimated $40 million budget from private individuals, corporations and foundations from throughout the nation. To begin this task, I ask the Olmsted Conservancy to make an expression of preliminary support, so contributors can have faith that our project will advance.

I’m grateful to have had the opportunity to present my plan to two subcommittees of the conservancy, and now before the full board of trustees. And on behalf of all those who yearn for Buffalo’s bright new days to continue in both intensity and number, I now respectfully request its collaboration and support.

Kevin Gaughan is a Buffalo civic leader. This article is excerpted from his presentation to the trustees of the Buffalo Olmsted Parks Conservancy this past Thursday. His email is kevin@kevingaughan.com

Letter: Social Security recipients need a raise to keep up

The inflation rate has skyrocketed and looks worse than the Jimmy Carter years. In 1980, Social Security got a 14% increase and in 1981 an 11.…

Over the past few months, Mayor Byron Brown and the Buffalo Police have moved to curtail illegal riding of ATVs and dirt bikes by confiscating…

It is unfortunate that letter writer Mark Clark finds the phrase white privilege “extremely racist.” His definition of privilege includes “a s…

So it seems the battle to allow 12-year-old children to join the big game hunting gang is still on. Once again we hear from hunters that it’s …

In large print over a full front-page photograph of the Blue Jays’ first home game at Sahlen Field are emblazoned the words, "Dreams come true…

Are the Democrats who want to eliminate the filibuster prepared to govern without it when they are, inevitably, on the other side?

Letter: The view from Pennsylvania on Cuomo's job performance

Shame on the Buffalo News editorial board for writing that offensive endorsement of Mayor Byron Brown for a fifth term. Endorse him, fine. But…

Letter: Save the Outer Harbor from destructive concerts

The Outer Harbor is a federally recognized “Important Bird Area.” Yet the publicity arm of the Erie Canal Harbor Development Corp. allows it t…

Letter: Left-of-center media fails to do its job

In the editorial section of The News on June 7 was an editorial titled "A shield for Americans." An editorial I can endorse wholeheartedly.

The Meadow at Delaware Park in Buffalo is abuzz with activity seven days a week throughout the year. Photos on a typical day at the beloved Olmsted park, Thursday, Aug. 4, 2016. (Sharon Cantillon/Buffalo News)