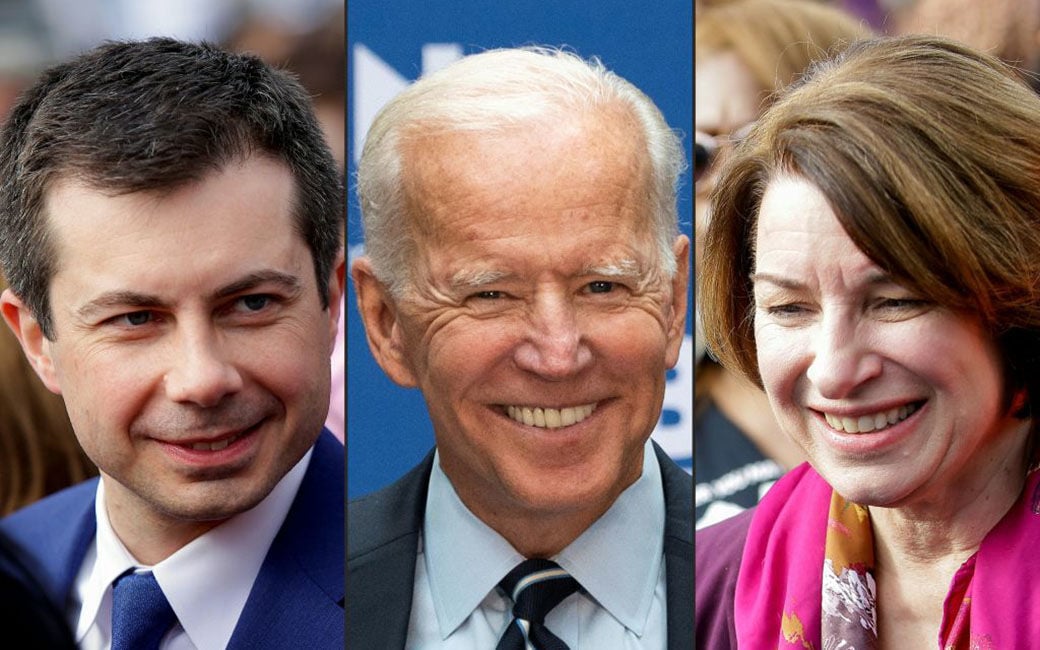 The presidential hopes of Joe Biden, center, received a major boost after Amy Klobuchar and Pete Buttigieg dropped out of the Democratic race after many voters had cast early ballots. (Getty Images file photo) 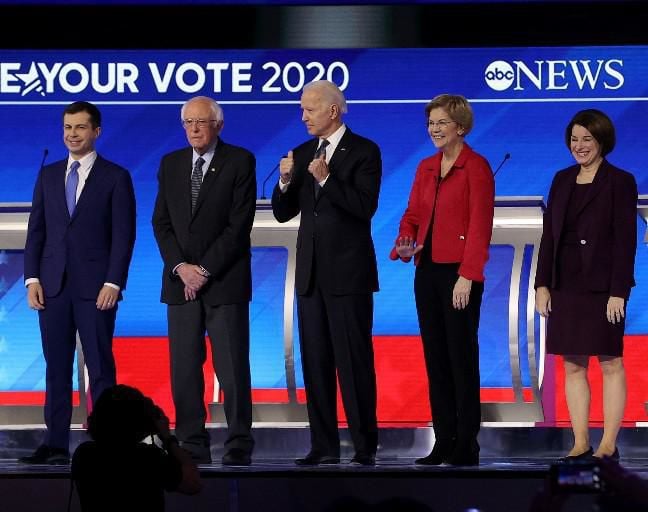 It could happen in New York – probably not this year, as it turns out, but in future primaries. It’s a problem that needs attention.

Those early Super Tuesday voters took that chance, of course, though given the evidence of post-election protests, they surely hadn’t accounted for it. Nevertheless, with only a few exceptions, early voting laws simply don’t contemplate the wrinkle caused by candidates who drop out of a race after early voting begins.

But that’s what happened last week with the withdrawals of Buttigieg, the former mayor of South Bend, Ind., Klobuchar, a sitting senator from Minnesota, and Steyer, a billionaire former hedge fund executive. They ended their presidential campaigns after last Saturday’s South Carolina primary, with Buttigieg and Klobuchar throwing their support to its winner, former Vice President Joe Biden. In California, Texas and other Super Tuesday states, there are no do-overs.

Exceptions may occur in some states where voters mail in an absentee ballot, which offers a different form of early voting. New York allows a version of that. So does Michigan. In both, a voter who beats his ballot to the elections office may ask to have the ballot “spoiled” and then cast a new vote for an existing candidate. Interestingly, Minnesota also allows people to switch votes, but the deadline passed the week before Klobuchar and the others ended their campaigns.

But when an early vote is cast in person, the ballot stands, even if it’s for a candidate who is no longer in the race. It’s not a preposterous policy, given the need to preserve confidence in the legitimacy of the results. Still, the vote is wasted.

New York is one of those states.

Early voting, as distinguished from the absentee variety, was adopted in this state last year in an effort to increase voter turnout. It is done in person and it had a generally successful debut in November’s off-year elections and will be in effect again for this year’s general election, June’s state primaries and, more to the point, next month’s presidential primary.

Only Democrats are running in that race which remains unsettled, despite last week’s surge by Biden. With Thursday’s withdrawal by Massachusetts Sen. Elizabeth Warren, Biden and Sanders are the only viable candidates remaining.

Early voting in New York’s primary begins on April 18 and ends April 26, two days before the election. While the possibility of wasted votes here was rendered moot when Warren ended her campaign, the overall problem remains.

For example, what if Warren, who had been reviewing her campaign in the aftermath of her Super Tuesday disappointments, hadn’t made her decision until, say, April 24? In that case, New York’s Democratic voters would have needed to acknowledge the potential for wasted votes. And, of course, it’s not just New York.

Millions of early voters in Super Tuesday states are wishing they had waited until their election day to cast their ballots. At least half of the total ballots in California, Colorado, Texas and Utah were expected to come from early and absentee voting.

In Colorado and Utah and maybe other states, hundreds of those early voters have besieged the Democratic Party, clamoring for the right to recast their votes. They are understandably angry, but they are out of luck.

Some portion of them found, too late, that their vote didn’t count. But the problems go beyond a favored candidate dropping out. Suppose some of those voters cast ballots for Klobuchar, hoping to block Biden, or for Warren, hoping to trip up Sanders. In the end, their vote may have helped the candidate they wanted to curb.

One potential solution to this problem is to allow all early voters, including those casting absentee ballots, to choose more than one candidate – the one they prefer and one or two fall-backs that would be used only if a candidate withdraws before the formal election. It’s called ranked-choice voting, and it’s not new. Putting such a policy in place might require some logistical and technical adjustments, and might never be used except in a presidential primary, but it wouldn’t be unfair and it would encourage confidence in early voting.

It’s unfortunate that this happened to Super Tuesday voters, especially this year, when interest is running at fever pitch. But the 2024 election may be similarly compelling and, even it it’s not, Super Tuesday has exposed a grievous flaw in the system. It’s one that can be fixed, so let’s fix it.

Here are some critical dates related to the April 28 presidential primary, according to the New York State Board of Elections:

April 3: Last day to postmark application; must be received no later than April 8 by the local Board of Elections. Also last day for in-person registration.

April 21: Last day to postmark application for a ballot.

April 27: Last day to apply in person for a ballot. Also last day to postmark mail-in ballot, which must be received by the local Board of Elections no later than May 5.

April 28: Last day to deliver ballot in person to Board of Elections.

April 3: Last day for a Board of Elections to receive application for ballot if not previously registered.

April 21: Last day for a Board of Elections to receive an application if previously registered.

April 27: Last day to apply personally if previously registered. Also last day to postmark ballot, which must be received by the Board of Elections no later than May 5.

March 16: Last day to designate early voting polling places, and their hours of operation for the presidential primary election.

April 18-26: Days of early voting for the presidential primary election.

What’s your opinion? Send it to us at lettertoeditor@buffnews.com. Letters should be a maximum of 300 words and must convey an opinion. The column does not print poetry, announcements of community events or thank you letters. A writer or household may appear only once every 30 days. All letters are subject to fact-checking and editing.

The Editorial Board: U.S. must improve on Covid-19 before Canada asks us back

More Americans – governments and individuals – will need to adopt strategies to combat the coronavirus if countries are going to welcome us again.

The Editorial Board: Celebrate, and protect, your First Amendment freedoms

Whatever you drink during your socially distanced Fourth of July celebration today, raise a glass to the First Amendment. It makes us who we are.

Give Horne her pension

Derek Chauvin wasn’t alone in the murder with which he is charged. As the Minneapolis police officer ground his knee into the neck of George Floyd last month, removing it only after 8 minutes and 46 seconds had passed, three other officers either helped to restrain the dying man or did nothing to stop the slow-motion homicide being committed

The Editorial Board: Wise decision on wind farm

The story was small but its import may be significant. In the Southern Tier, regulators this month approved construction of the largest wind farm ever in New York. Anyone who understands that the Earth really is warming, with consequences that can be regionally catastrophic, should cheer. Of course, not everybody is. The possibility of lawsuits is real as various

Uninspiring choices in the 27th, but Jacobs has the edge

It’s liable to be a confusing election next week as residents of the 27th Congressional District vote twice for the same seat. First is the belated special election to complete the term of Chris Collins, the disgraced former congressman who was convicted on federal charges of insider trading. On the same day – June 23 – the district’s Republicans

The Editorial Board: Goldman turns his attention to Allen Street

One might forgive Mark Goldman for hesitating during these perilous Covid-19 times but, as is his fashion, he is forging ahead. Goldman is credited with the transformation of Chippewa Street into an entertainment district after opening the Calumet Café in 1990. Back then, few would have considered the area desirable, but after Goldman entered and others followed, Chippewa Street

Editorial: Time to cast your vote

Editorial: Time to cast your vote

Editorial: Endorsements for Buffalo School Board

Editorial: Endorsements for Buffalo School Board

The presidential hopes of Joe Biden, center, received a major boost after Amy Klobuchar and Pete Buttigieg dropped out of the Democratic race after many voters had cast early ballots. (Getty Images file photo)