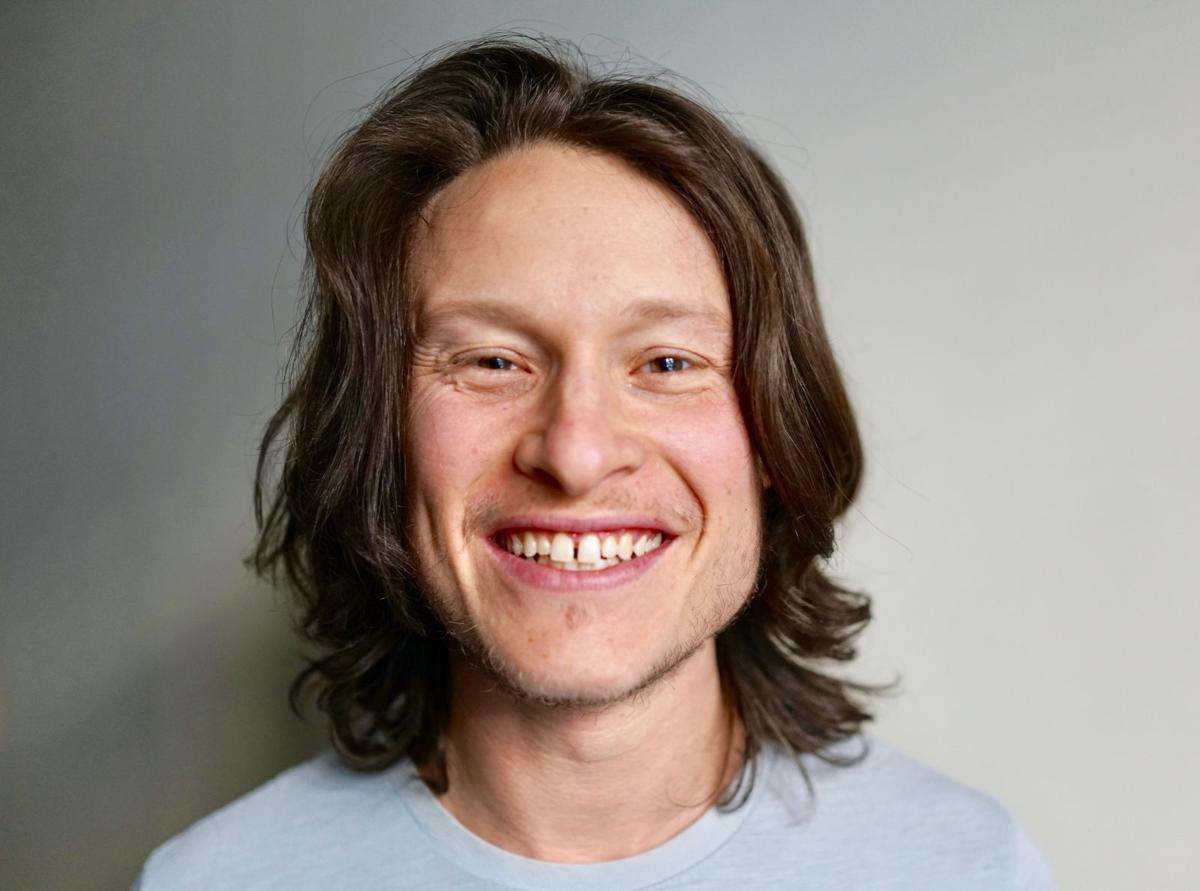 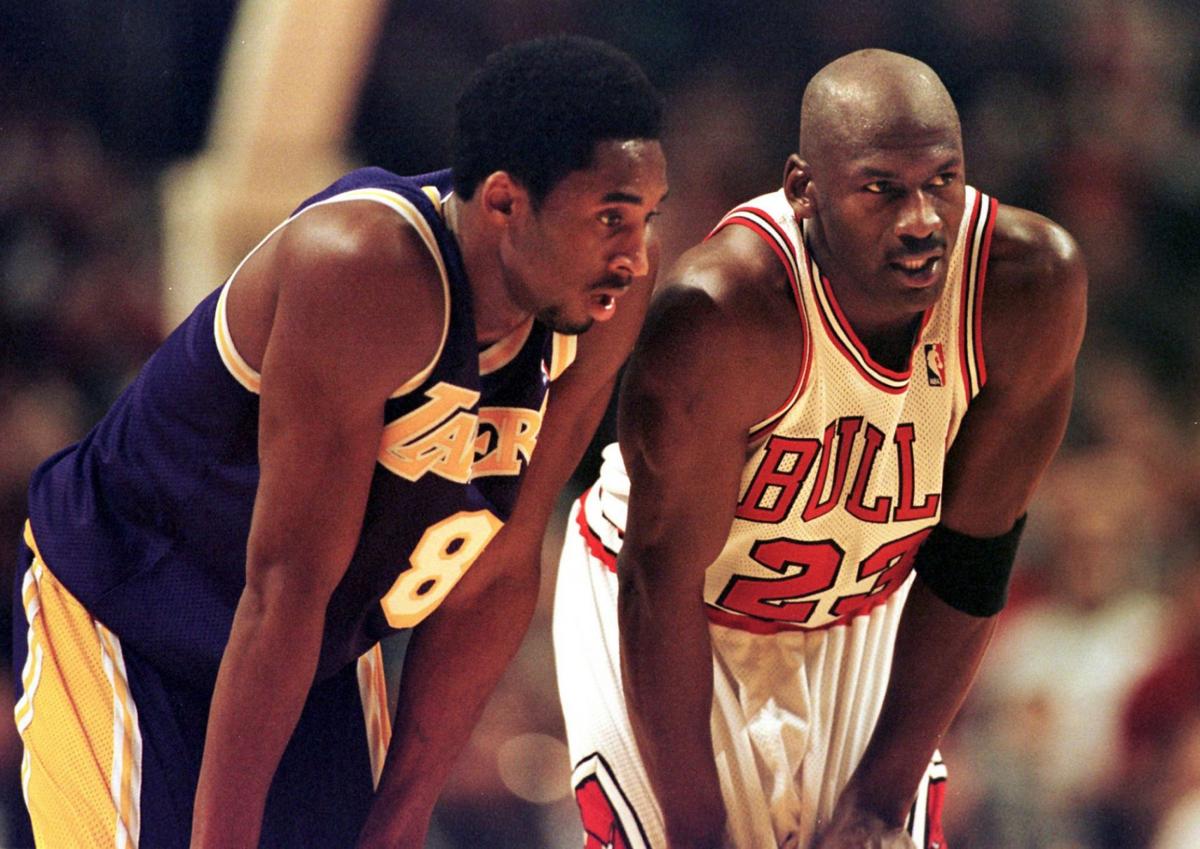 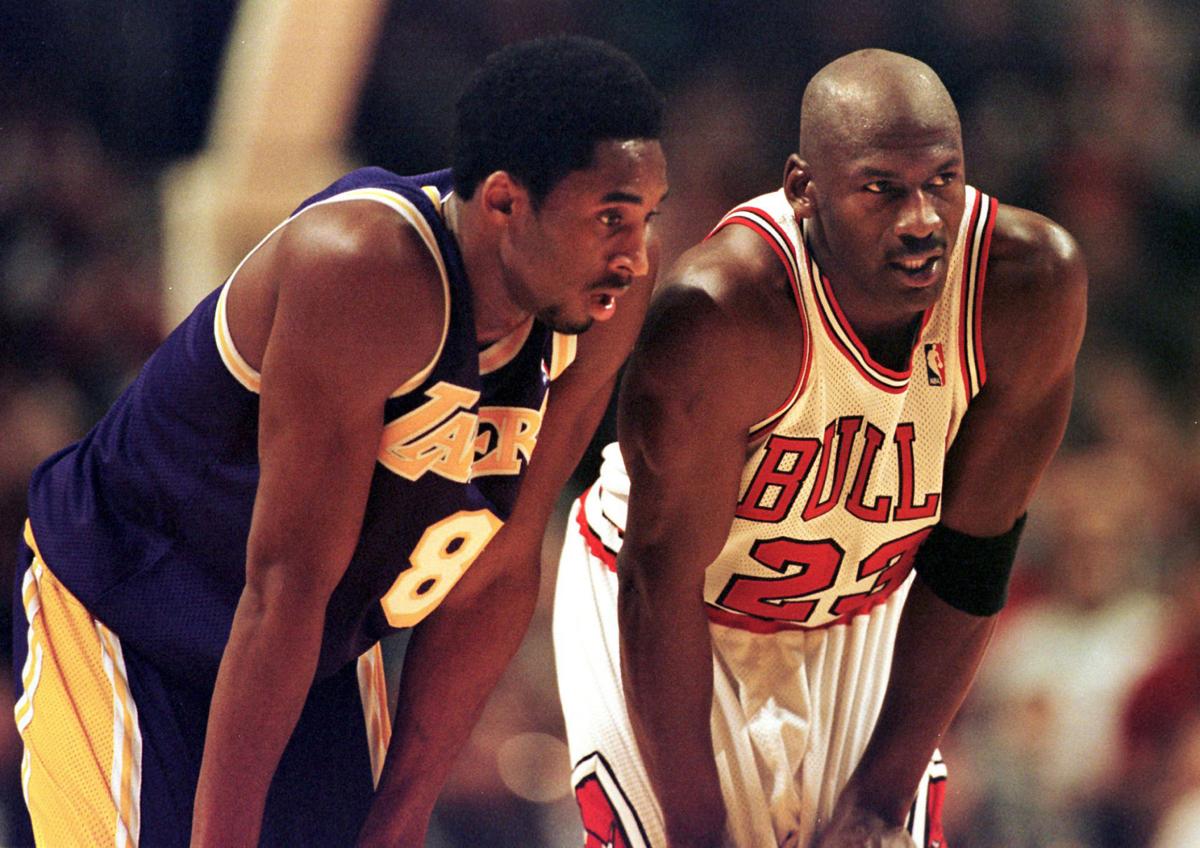 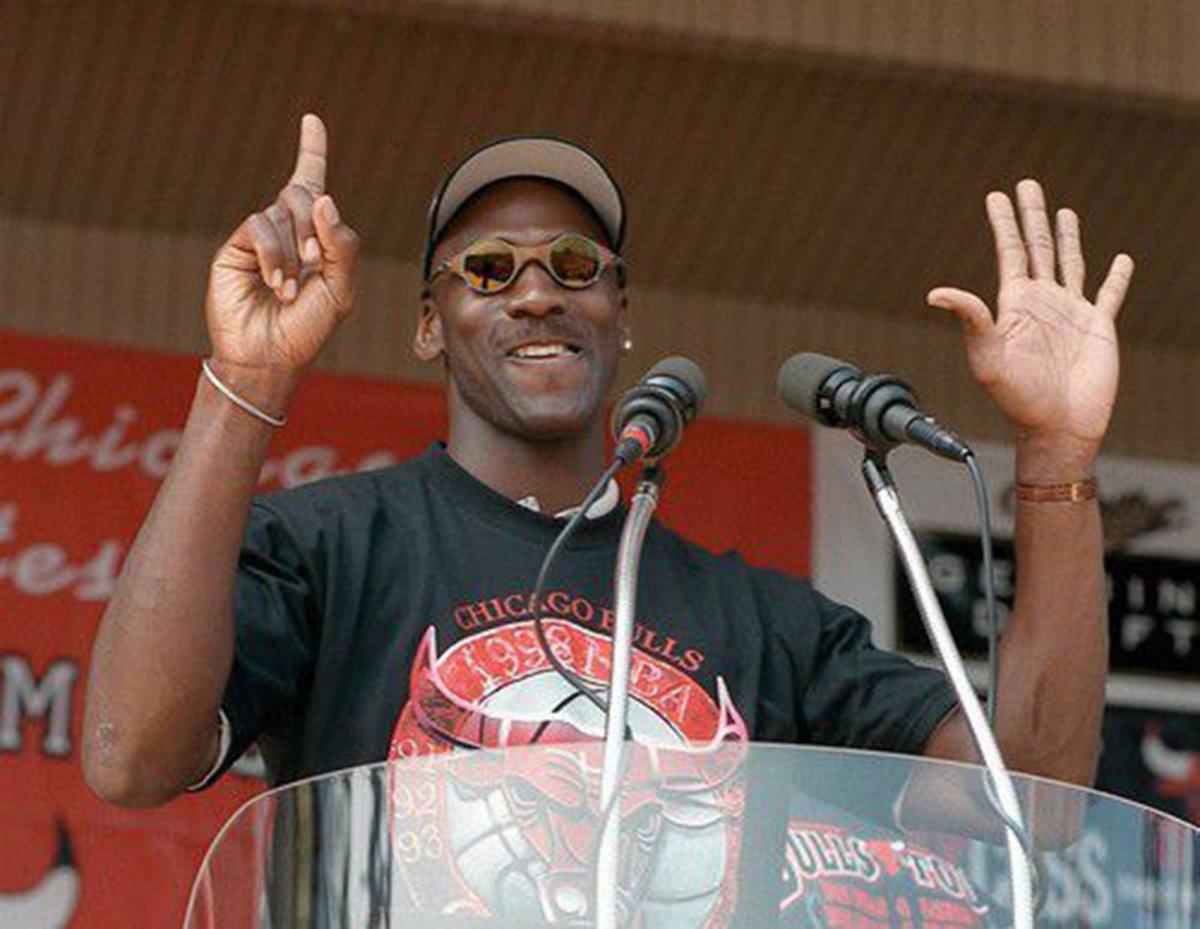 Michael Jordan holds up six fingers for each championship of the Chicago Bulls dynasty, on June 16, 1998. (Chuck Berman/Chicago Tribune/TNS) 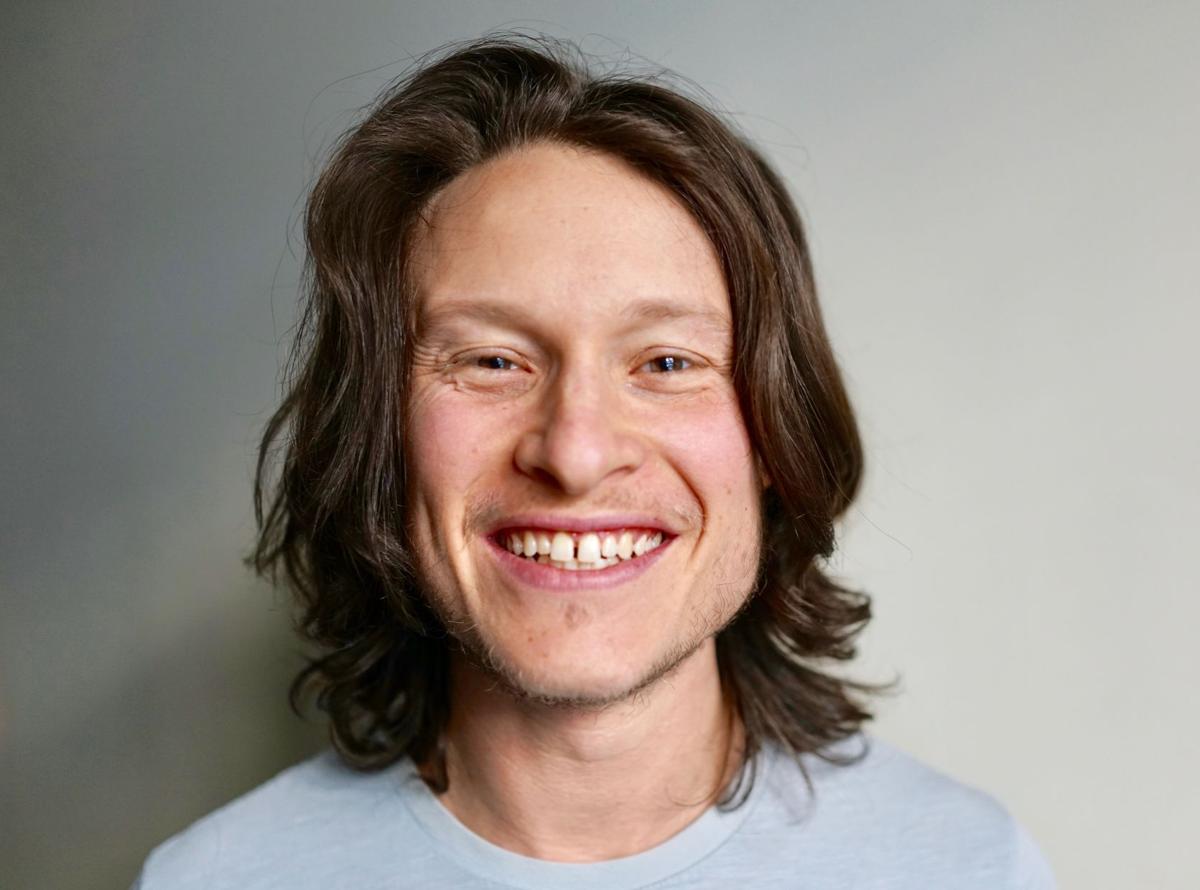 Ben Sozanski may have had the dream job of any basketball fan.

The Town of Tonawanda native and 2001 St. Joseph’s Collegiate Institute graduate was paid to watch footage of Michael Jordan and the Chicago Bulls for the 10-hour ESPN documentary “The Last Dance.”

Sozanski was a film editor for the later episodes, joining a team of three editors who worked on the project from the start and had much more input on it.

“It was such a big project that I think they wanted a little additional help,” Sozanski explained in a telephone interview.

He started working on “The Last Dance” around October of 2019. He joined around the seventh episode, which airs at 9 p.m. Sunday. And Episode 7 is the greatest episode of the series so far, as dramatic as any Game 7 in a playoff series.

The emotional episode deals with Jordan’s bond with his father James; his father’s murder; false media conjecture that the superstar’s gambling had something to do with the murder and his first retirement after the Bulls won the 1993 title; his attempt to play major league baseball; and whether his intensity as a player came “at the expense of being a nice guy."

While the episode deals extensively with Jordan’s verbal abuse of teammates, overall it is a sympathetic portrait of a demanding athlete whose teammates understood he was driving them for the greater good.

Sozanski’s job was to watch hours and hours of footage of Jordan, Scottie Pippen, Dennis Rodman, Toni Kukoc, Steve Kerr and the other 1997-98 Bulls capture the NBA title.

“Since I came on so late it was already really well-organized and multiple people already watched it and gone through it,” he explained. “A lot of the story was already kind of laid out and they had ideas of what they want to be in various episodes. I started working on the later episodes because a lot of the earlier ones were already close to being done."

The footage of the 1997-98 season brought memories of his youth.

“I grew up an Indiana Pacers fan and they played in the playoffs and it was a really good series,” said Sozanski. “That was pretty fun for me watching Reggie Miller, Rik Smits. That was a fortunate coincidence that I got to be on that.”

He said being a Pacers fan made perfect sense to a Western New Yorker since the Buffalo Braves were long gone.

“I did a book report on Reggie Miller when I was in middle school,” he explained. “I don't know why. I guess they probably just had that book in the library or something and I liked him as a player. Buffalo didn't have a team when I grew up so it's kind of like you just picked whoever I guess. The Pacers were pretty good at that point ... They seemed kind of appropriate as a Buffalo team. They made it pretty far a lot of times, but they never made it all the way.”

He doesn’t feel any ownership of any of “The Last Dance” episodes he helped edit because of his late arrival. He had nothing to do with the dramatic end of Sunday’s seventh episode when an emotional Jordan announces it is time for a break after a lengthy answer to the question of whether his intensity caused him not to be perceived as a nice person.

That powerful scene illustrated some of the frustrations Sozanski feels as an editor who isn’t at any interviews.

“One of the frustrating things about it is you work on these things with these interesting people or somebody goes to shoot in Antarctica or the tropics or whatever and then people say, ‘oh what was it like?’ And I say, ‘you know I was in the office.’ ‘Did you meet so and so?’ ‘No, I never met him.’

“As I've done this longer, I've grown pretty comfortable with that. Now it’s kind of nice that I don't have to take a flight every other week to be somewhere to try to pull everything together. It's a bit more relaxed. But you don't get the kind of thrill of actually being part of the story in that way of going to shoot it.

“On the other hand, there are a lot of projects you are really intimately involved in crafting a story and really trying to figure out all the beats of what's happening and how it fits into the larger narrative. That’s probably how the other three editors would be on this project. Not so much for me, because of the timing.”

A 2005 graduate of Vassar College, Sozanski went to New York City with “vague aspirations” to be in the film business and fell into the role of film editor.

“I was happy to have fallen into it,” he explained. “This is actually an industry that I didn’t even know existed.”

He started learning how to edit at a commercial editing company, first as an assistant and then an apprentice. “It seemed like something to try,” he said.

He has been very successful at it, earning an Emmy for his work on the award-winning ESPN series, “O.J. Made in America.” The Emmy is in the closet in his Brooklyn apartment.

“It is not a very big apartment, I think it would be too prominent if it were anywhere else,” he cracked.

He also joined the five-part Simpson series late, working on the final two episodes. The Bills fan was born too late to have seen O.J. Simpson in person but has seen him in highlights.

Sozanski didn’t see many comparisons to the two ESPN projects involving two of the greatest athletes in history.

“Some very surface level ones,” he said. “They were both extremely charismatic and transcendent talents in terms of their athleticism and there’s the element of being an ultimate competitor.”

He has never met Jordan. But does he feel like he knows him better after “The Last Dance”?

“I'm not sure,” said Sozanski. “I certainly know more than I did before I started this project. I do think there's an element of public and private persona, which is you get a little more of when you watch these kind of like fly-in-the wall, documentary footage. So more. But I wouldn't say I have a really kind of accurate picture of what his psyche is.”

There have been reports that Jordan fears the documentary will harm his image, make him look mean.

“I think there's an element of him that maybe he is concerned about that,” said Sozanski. “But I feel like also at this point he's been a public figure for so long … I feel like he said this probably publicly before – it kind of is what it is in terms of public perception … You can only control so much about what people think about you and the rest of it is kind of out of your control.”

Don Paul: Warm anomalies are over, with average fall temperatures on tap

After the autumnal weekend materialized as expected, the warmest first half of the month on record is already fading from memory. Through Oct.…

Williams: Freedman Joseph R. Holmes was murdered on the steps of a Virginia courthouse. A new marker tells why his life mattered.

Michael Paul Williams — a columnist with the Richmond Times-Dispatch in Richmond, Va. — won the 2021 Pulitzer Prize in Commentary "for penetrating and historically insightful columns that guided Richmond, a former capital of the Confederacy, through the painful and complicated process of dismantling the city's monuments to white supremacy."

Williams: Our democracy is being torched. A survey out of UVA suggests many voters are willing to watch it burn.

A falsehood-fed fire is engulfing American democracy, where more than half of Trump voters  -- and 4 out of 10 Biden voters -- support secession from the union.

Michael Jordan holds up six fingers for each championship of the Chicago Bulls dynasty, on June 16, 1998. (Chuck Berman/Chicago Tribune/TNS)