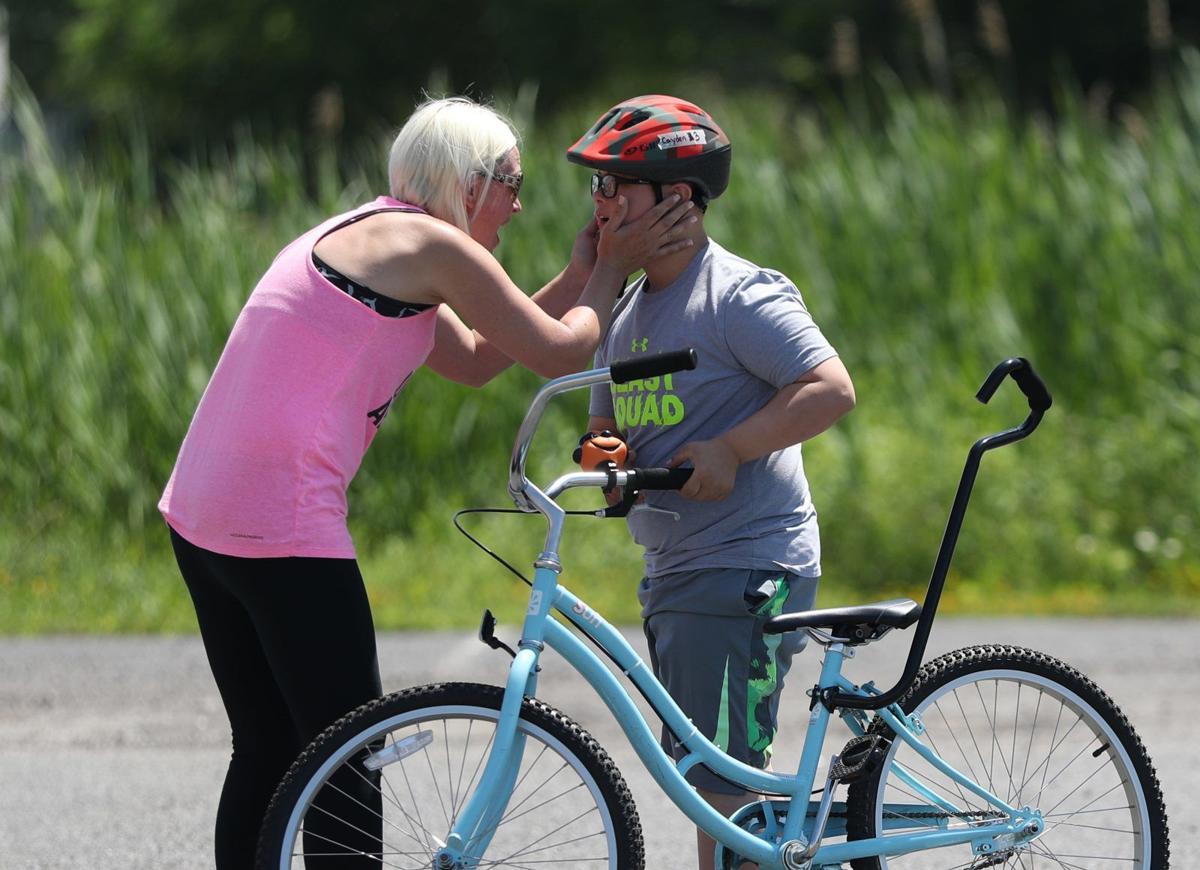 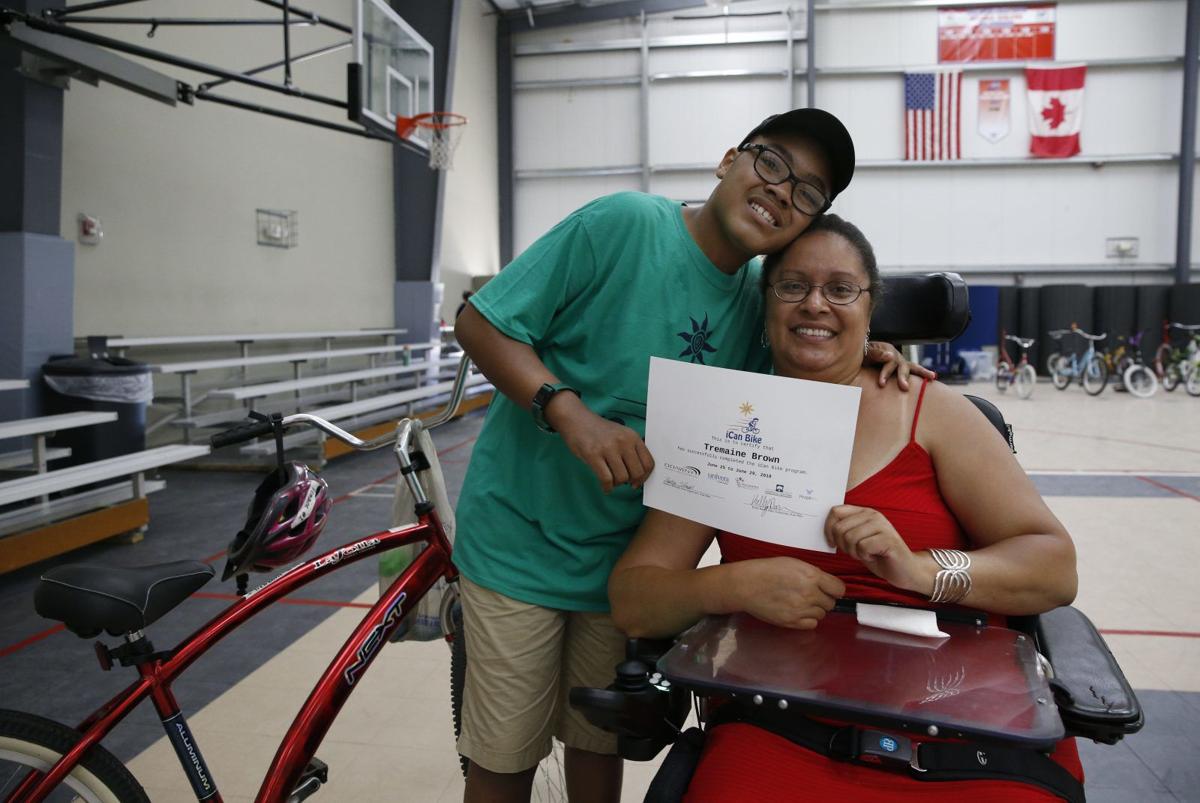 Sjunseeargn Foxx with her son, Tremaine Brown, after he received his certificate of completion Friday on the last day of the Western New York iCan bicycle camp. (Sharon Cantillon/Buffalo News)

In an ideal world, Sjunseeargn Foxx would have loved to handle the task herself.

Her son, Tremaine Brown, wanted to learn to ride a bike. Sjunseeargn wishes she could have helped him with it in the same way her own mother helped her, during her Brooklyn childhood. She wishes she could have held his bike and hurried alongside him outside their Williamsville home, letting go bit by bit until her son felt that sudden rush, that magical feeling you never forget.

Like any parent, she wanted to be at his side when Tremaine did it on his own.

That choice was taken out of Sjunseeargn's hands. In 2015, the car she was driving was rear-ended by another vehicle, at high speed, while Sjunseeargn was at a professional conference in Atlanta. She barely survived. The accident left her paralyzed from the chest down. She has willed herself to adjust as best she can, but there are changes in life she has to accept.

Tremaine, 14, was born with autism, a developmental disability. He did not say his first word until he was 6. Riding a bicycle has been a challenge, something he wants desperately, and Sjunseeargn had to approach her son's great dream in a different way.

Last week, she took him to the Western New York iCan Bike Camp, at the Buffalo Niagara Court Center in West Seneca. Dozens of volunteers helped specialists from iCan Shine, a Pennsylvania-based organization, in teaching 40 people with disabilities, most of them children, how to ride a two-wheel bicycle.

The camp filled up quickly. Amy Monson of West Seneca, one of the local organizers, said some families made the daily drive from as far away as Sodus, on the other side of Rochester. Amy's 12-year-old son Jack offered a perfect summary of the entire goal, once he made a solo ride.

"I'm proud," said Jack, who was born with Down syndrome.

As for Tremaine, he kept struggling early in the week. One night, he said to his mother:

Yet the people working with him were undaunted. Each participant begins with a bike set up with a roller that serves in place of a back wheel, a roller that can be slowly reduced until the riders balance on their own. There are also training sessions on tandem bicycles that provide a sense of balance and confidence.

In the same way that it has for a decade, the camp resulted in dozens of success stories. Billy Lickfeld, for instance, has wanted for years to ride a bike alongside his sister Sophia, now 12, at their Boston home in Erie County, or with his best buddy Coy, who lives across the street.

Billy, 10, had surgery six years ago, after doctors learned he had a brain tumor. His mother, Tammy Lickfeld, said 25 percent of the tumor, which is benign, was impossible to remove. At first, immediately after the operation, he could not even lift his head. Week by week, year by year, Billy worked at his recovery.

Friday, at the camp, he rode a two-wheeler alone.

Carly Slisz, 13, born with Down syndrome, had a similar breakthrough. Her mother, Wendy Slisz, watched for years as her daughter intently studied other children while they casually rode up and down the street, but the skill did not come easily. She attended camp last year and came close, but she did not quite get it down.

Friday, Carly figured it out. She moved outside from practicing in a gym and gave her own bike a shot in the parking lot. Kelly Barns, one of the iCan staff, ran with her for a few steps, but before long Carly was going like a rocket, confident in her turns, making loop after loop alone beneath the morning sun.

She finally pulled up, knocked down the kickstand like a veteran, then slapped the hands of her mother and moved on to her brothers, Jack and Nick, who showed up to see the moment.

"Something like this," Wendy said, "and her whole life changes."

Katie Luciano, of Grand Island, shared that euphoria. Her son Cayden, 11, also born with Down syndrome, endured a couple of falls while learning to ride, including a tumble on his last attempt Thursday. He decided he wanted to quit, but Katie told him how grownups can sometimes fall down, too, how she gets bumps and bruises and the only choice is to try again.

Cayden, an intense listener, took it in. By Friday, he was blasting far ahead as Joel Nicholas and Jack Kompson, two Canisius High School volunteers, did their best to keep up.

"He's my life," Katie said, watching with awe and just a little flash of nerves, until Cayden pulled over and she wrapped him in a hug.

Farewell, Diane Muench: Born with Down syndrome, pioneer by example in WNY movement for human rights

For Tremaine Brown, each day at the camp kept getting a little better. He worked closely with Lucas Romanowski, 15, one of the volunteers, who had a powerful impact.

By Wednesday, just before Tremaine went upstairs to go to bed, he looked at his mother and said, "I have hope."

Sjunseeargn wept, realizing at that moment what might be coming. Tremaine struggled again on Thursday, but Lucas said something began to change with his confidence in an almost mystical way. You could sense it, Lucas said, when Tremaine arrived Friday in the company of his mom and a supportive family entourage.

His dad had to work but his paternal grandfather, Les Brown Sr., was there, as were his sister Damiah, 16, and Julia Foxx, his maternal grandmother.

Sjunseeargn, watching from her wheelchair, reflected on how quickly and entirely life can flip upside down. When Tremaine was little, before he started talking, she used picture boards to help him begin to reach out to the world.

Years later, unable to move in a hospital bed after her horrific crash, she turned to that same method to regain her own ability to communicate, which opened the door to an even deeper kinship with her son.

"Who knew?" said Sjunseeargn, so overwhelmed with gratitude that she bought lunch Friday for every staff member and participant in the camp. "They've blessed us and I want to bless them."

Finally, she settled in to watch as Lucas took off running alongside Tremaine's bicycle, until that instant so many of us recall from childhood, the instant when that last fingertip is released and you are riding alone before you even realize it.

"Something connected today," said Lucas, who watched Tremaine go in circle after circle until he finally pulled up, beaming from underneath his helmet. He hugged his mother and his grandmother and slapped hands with his sister, before he sat next to his grandpa at an awards ceremony.

Tremaine said he already has big plans. There is a McDonald's not far from his house, and he intends to take a leisurely ride over there – maybe by himself, maybe with Damiah – where he will get some chicken tenders and his beloved chocolate milk.

As for a nickname, he told Damiah he has one in mind.

"Lightning," he said, and once again, their mother cried.

Students save ‘race’ class at time it’s needed most

"These students have taught their own lesson, showing their classmates that individuals can make a difference," Rod Watson writes.

Sjunseeargn Foxx with her son, Tremaine Brown, after he received his certificate of completion Friday on the last day of the Western New York iCan bicycle camp. (Sharon Cantillon/Buffalo News)