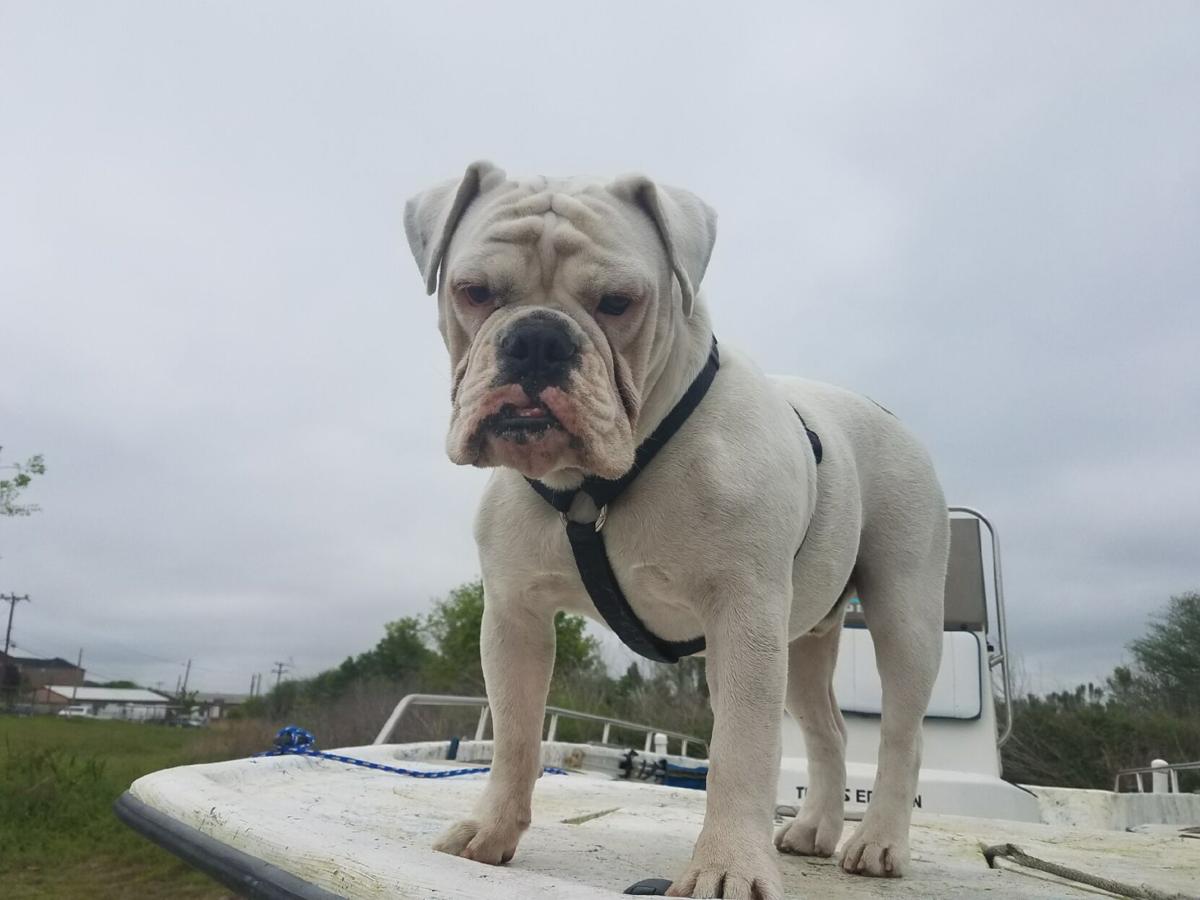 Frank: The English bulldog of Starpoint graduate David Scherff fell in the water and has not been found amid Sunday's rescue efforts. (David Scherff image) 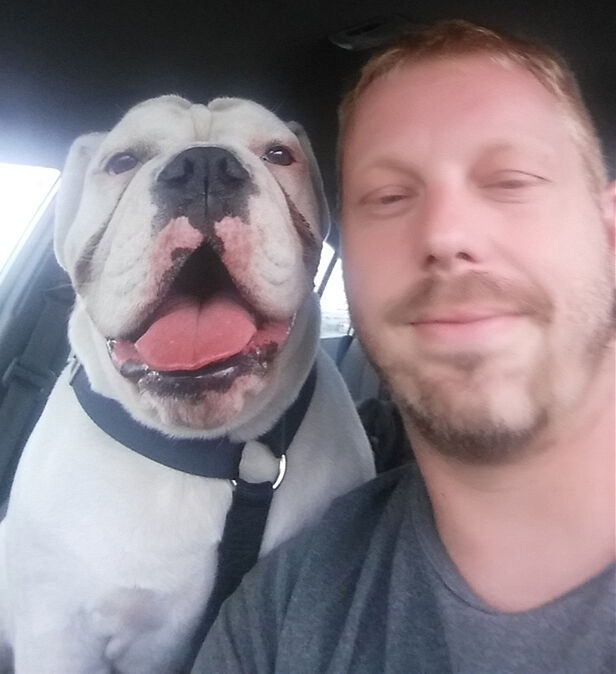 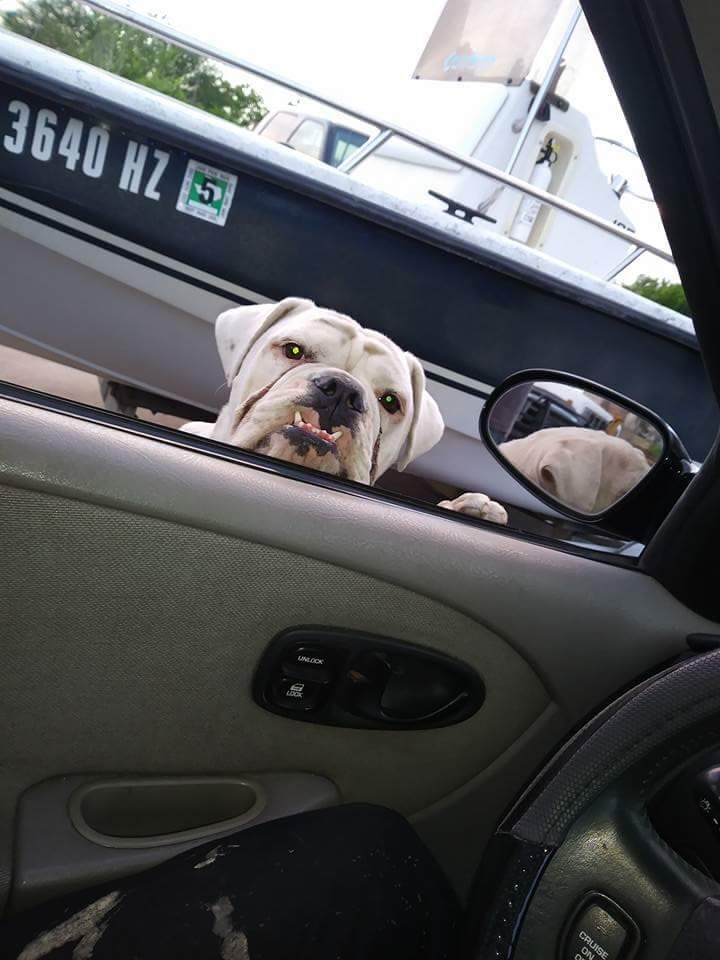 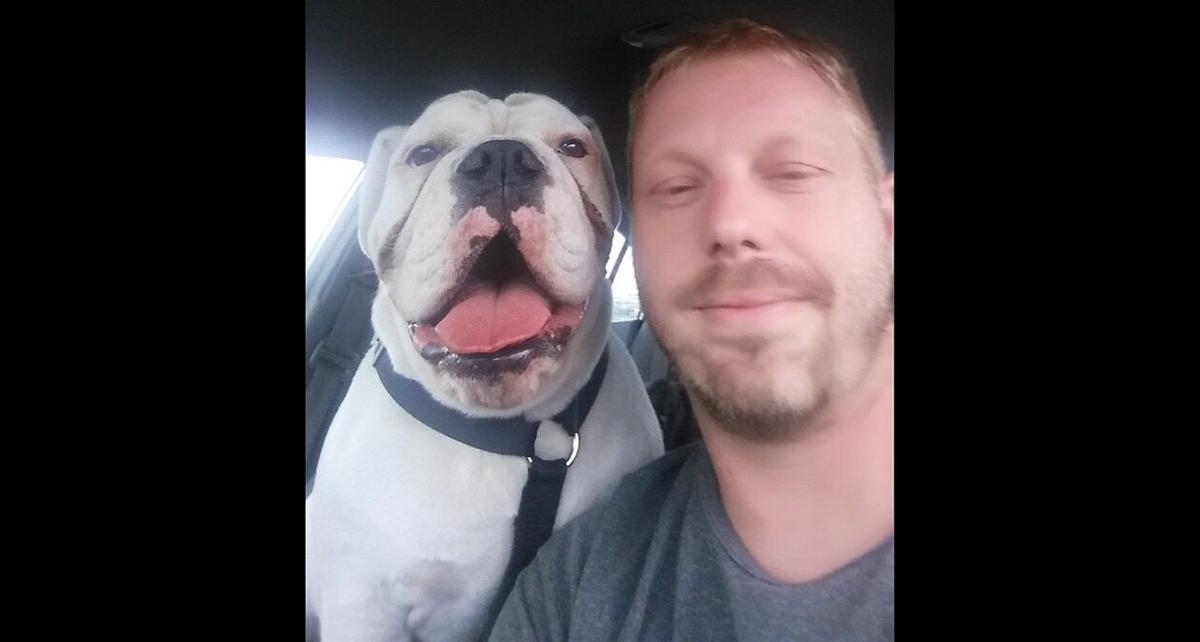 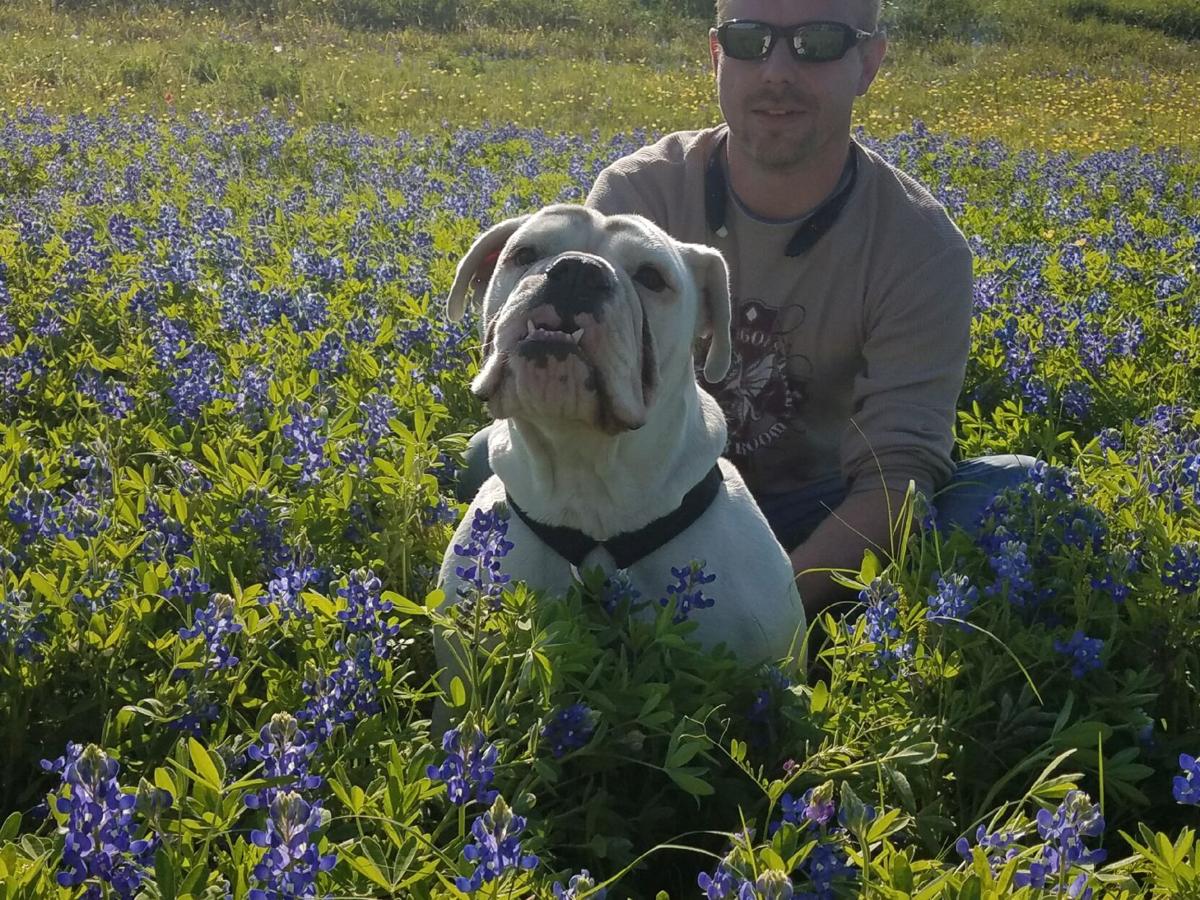 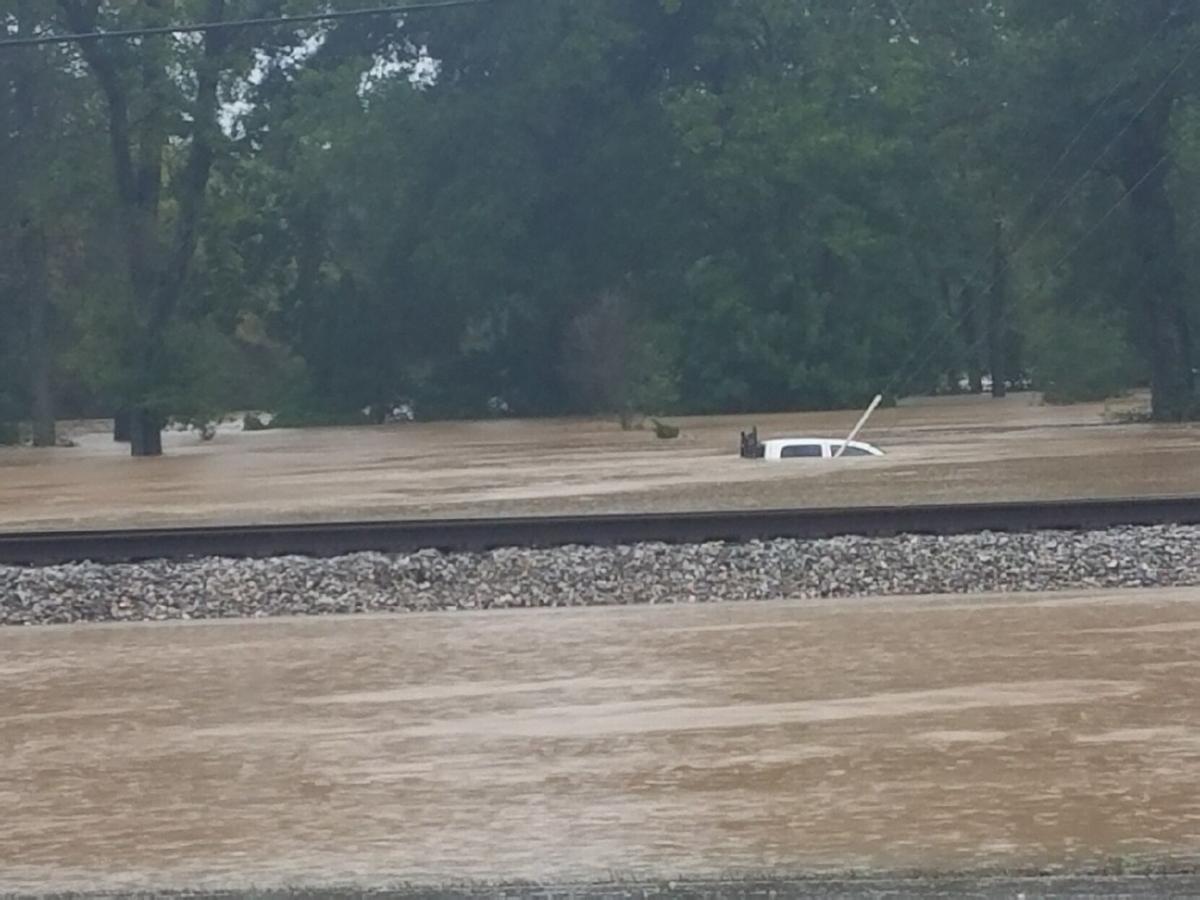 David Scherff wants to make a couple of things clear. His overwhelming feeling Monday was relief that Tim Donovan, a former Marine, is safe. Amid the chaos of the flooding in Texas, Scherff feared for a while that Donovan was dead.

Scherff, a native of Buffalo's west side and a graduate of Starpoint High School, is intensely conscious of the life or death nature of the mayhem created by Hurricane Harvey. He does not want anyone to think he compares his own sadness to the grief of families who have suffered terrible loss in the relentless storm.

Yet Scherff said he was struggling for composure as he spoke on the phone, maybe 10 minutes after he returned to his San Antonio home from helping with rescue efforts near Houston. He collapsed into a chair, all too aware that a familiar presence was missing near his feet.

"That's where he'd be," Scherff said.

He was talking about Frank, his English bulldog, lost in the flood.

Scherff brought the dog home as a malnourished castoff more than two years ago.

"He was a rescue," said Scherff, who found the dog in a listing on Craigslist.

From day one, he said, they forged a connection. Despite mistreatment early in life, Frank's spirit was never broken. He seemed to appreciate the guy who took him in.

Before long, the dog was always alongside Scherff. Frank became a beloved regular at the automotive parts store Scherff runs in San Antonio. Customers looked for Frank. When Scherff bought pizza, the dog received a slice. An ice cream vendor who works in the area routinely stopped by with vanilla ice cream for Frank.

At home, Frank slept on Scherff's bed. The dog casually followed Scherff around the house.

"He had to be wherever people were," Scherff said.

That's why Frank rode along on Sunday, when Scherff and some companions hitched their boats to their pickups and took off on the 3-hour drive to Houston. Scherff's passenger on the ride was Donovan, whom Scherff had never met before that day. Donovan heard from a friend that they were going. He asked to ride along, then made a connection with Frank in the truck.

Donovan was there because he shared the same feeling as Scherff:

If families were in trouble, he intended to show up.

"They needed people with boats and big trucks," said Scherff, 35, who moved to Texas six years ago because his parents are there – and because he grew weary of snow. "Being from Buffalo, where people get stuck on the Skyway, where you have the big blizzards .... when people are in need, you get out and help. It's the neighborly thing to do."

The original goal was driving into Houston itself. But the flooding was severe enough in Katy, a nearby city, that Scherff and his companions pulled off the highway to see what they could do. They discovered entire neighborhoods were underwater. Scherff and his friends parked their trucks in an area where the water remained shallow enough to drive, and they took their boats into a subdivision where the tops of many automobiles were submerged beneath the flood.

"We helped so many people I lost count," Scherff said.

He traveled back and forth in his 18-foot fishing boat with two other men. One was a rescuer whose name he doesn't know. The other was Donovan, a professional chef from San Antonio who works as a team leader for Whole Foods Market.

Donovan, 40, served in the Marines, as his father did before him. He wore a T-shirt, cargo pants and carried a Glock G19 pistol, a firearm that he said "can work in very adverse conditions."

Within a few hours, that helped to save his life.

Scherff was steering the boat. He figures they aided more than 50 people in reaching the safety of Katy High School, including a woman whose paralysis caused her to use a wheelchair. They would transport their passengers to a railroad embankment that served as a kind of dam against the flood, then travel parallel to it until they reached the point where they parked the trucks. From there, they could give people a ride.

It was after sundown, still raining, when they picked up a couple with two children, both probably in their early teens, at a flooded house. The couple had two small "lap dogs," as Scherff puts it. Frank, a little curious, was near the bow of the boat when they struck something hard, maybe the roof of a car.

The jolt threw the dog into the swirling water.

He went in after him.

You have to imagine the scene, Scherff said: Dark surface, dark sky, falling rain. He swung the boat toward the railroad tracks to tie it up, and the other rescuer – the man whose name Scherff doesn't know – fell into the water. Scherff could see water pushing through holes in the embankment as it worked at the gravel and the soil. Not far away, the flood was surging beneath an underpass, like water draining from a tub.

Scherff grabbed the man and helped him get into the boat. He helped the family climb onto safe footing by the railroad tracks.

Soaked, he looked around.

There was no sign in the darkness of Donovan or Frank.

Scherff led the shaken family along the tracks, until they came to a place where the water was shallow enough for the parents and the two teens to keep walking.

Two patrol officers pulled up. He told them what happened. They all looked at the dark water, at the current surging beneath the bridge.

"If they went through that," one said quietly, "they're both gone."

Scherff felt utter despair. He wondered if he should call Donovan's wife. He walked back to his truck and sat in the driver's seat, stunned, the officers silent outside the door.

It was Donovan, amid the flood, clinging to a tree.

"When the pup went over, I just reacted and went in after him," Donovan wrote in a text, which "in hindsight was a bad idea."

He could see Frank swimming in the fierce current in front of him, he said, until they were both pulled beneath the railroad bridge. When Donovan popped up, he could no longer see the dog. He was dragged again beneath a highway bridge. He said he thought fast about basic safety skills and "got myself floating so I could start self-survival. Once I got a secure perch in a tree, I made an assessment of my gear and location."

Unable to see anyone nearby, he said he "fired three rounds, which is a signal of distress."

Scherff and the officers heard the gun, but there was no one to call for immediate help because so many rescue crews were already dealing with emergencies. Instead, they turned to what Scherff describes as a kind of community-based distress line. A search and rescue team from Ohio – in Texas to offer volunteer assistance – showed up after about 45 minutes, Scherff said.

By using lights and calling out, they were able to spot Donovan and get a boat to him.

Monday, he was sore and exhausted – but alive.

"I got very lucky," Donovan wrote. "I should be dead."

Scherff went home without his fishing boat, which he was forced to leave in Katy. While his primary emotion is relief that Donovan's all right, he remains sick with worry about his dog. His home seems empty without Frank. Scherff is hoping for a small miracle, that Frank somehow found a way to get to land, that someone in Katy will care for the dog until the flood recedes.

As for Donovan, he is simply grateful for the rescuers who got him home safely.

"Wish I could have saved more people," he wrote, "and poor sweet Frank, the English bulldog."

Buffalo Bill's history with Native Americans was complicated. Should that matter to the Buffalo Bills?

William F. Cody – or, more precisely, his persona as Buffalo Bill – was the most famous American of his time, but that time was long ago; these days, more than 100 years since his death, the legend of Buffalo Bill is faded, even here in the city where it lives on in the name of our football team.

Frank: The English bulldog of Starpoint graduate David Scherff fell in the water and has not been found amid Sunday's rescue efforts. (David Scherff image)