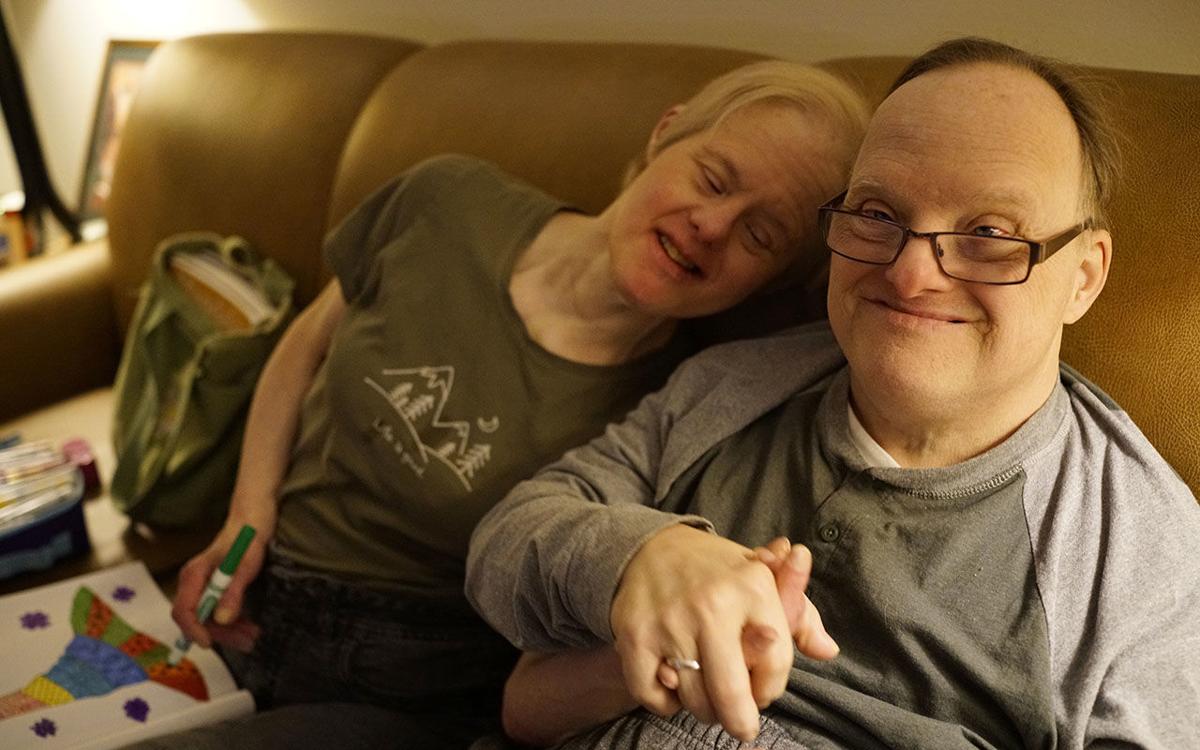 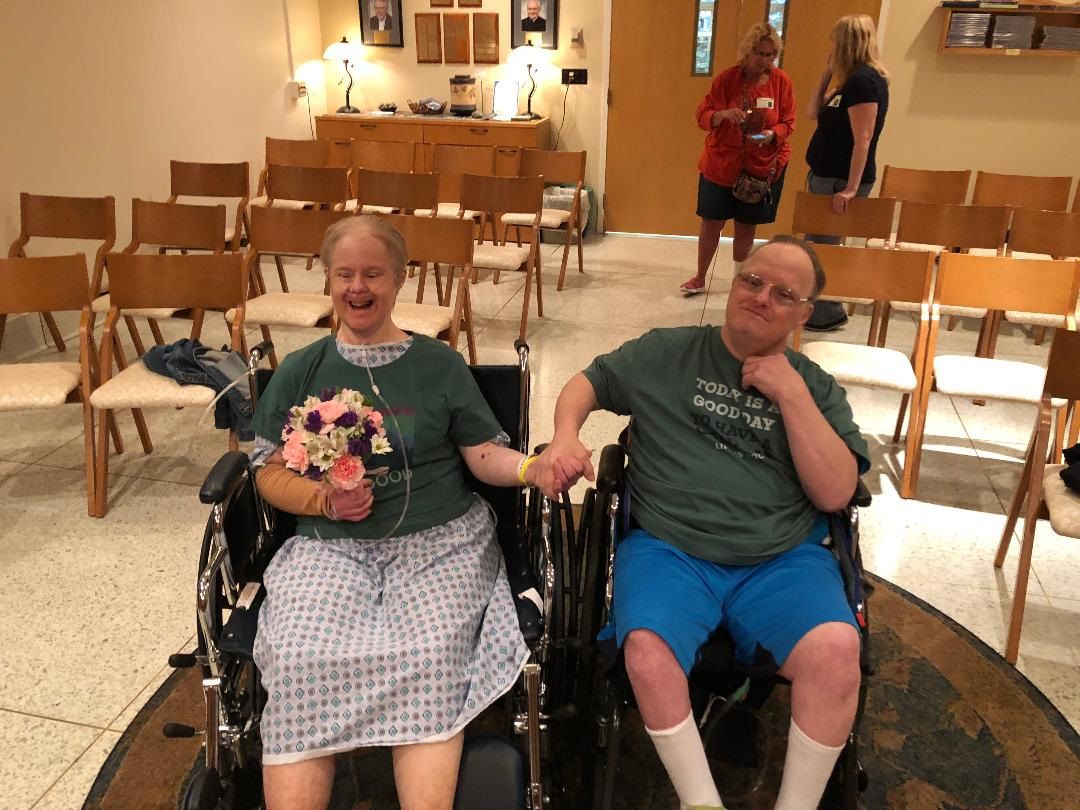 Paul and Kris Scharoun-DeForge, as they renewed their vows on their 25th anniversary. (Family photo) 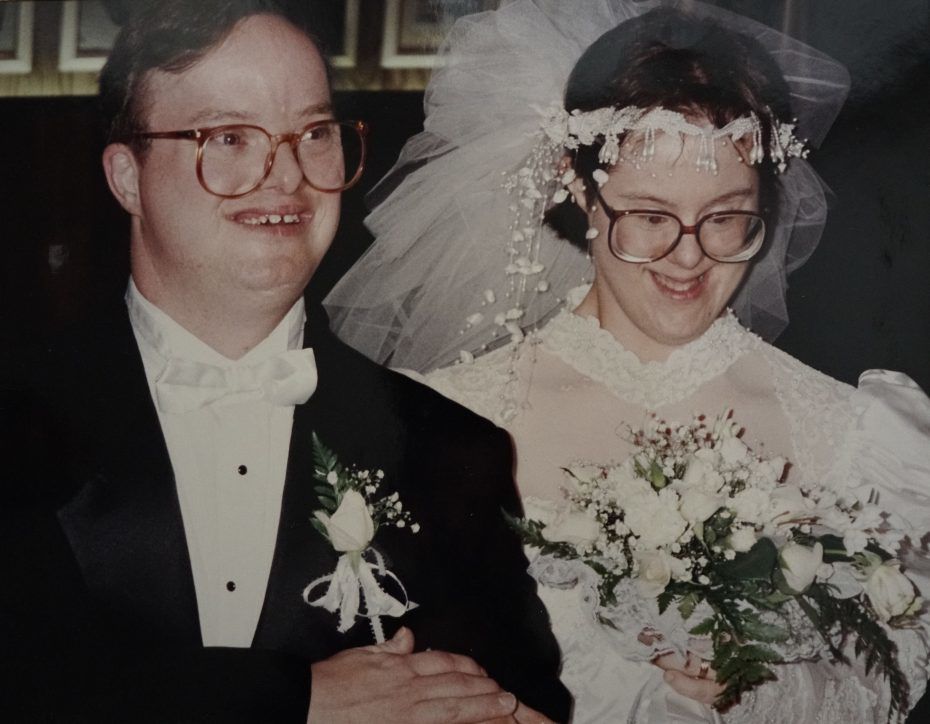 Paul and Kris Scharoun-DeForge on their wedding day, 1994. (Family photo) 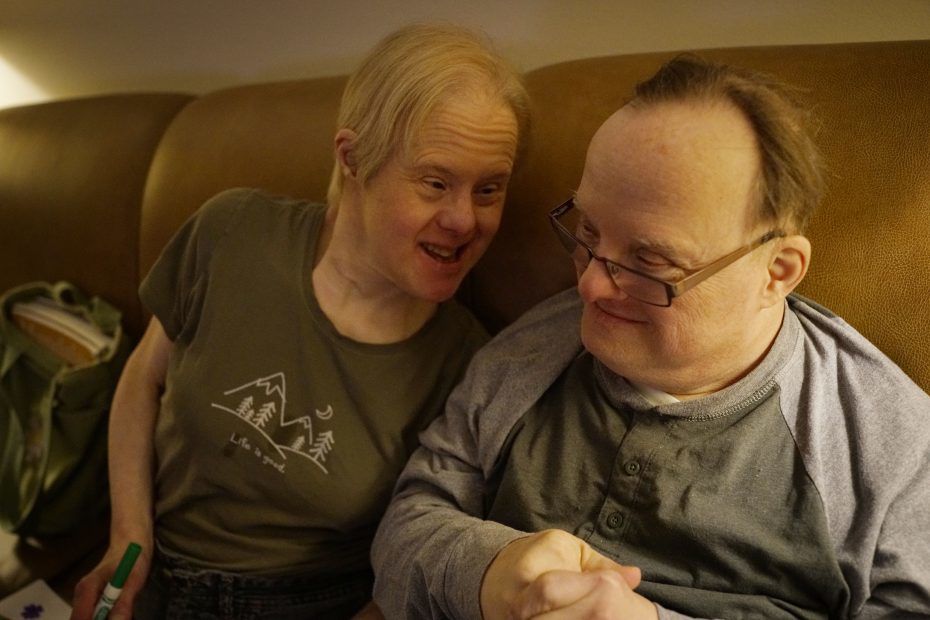 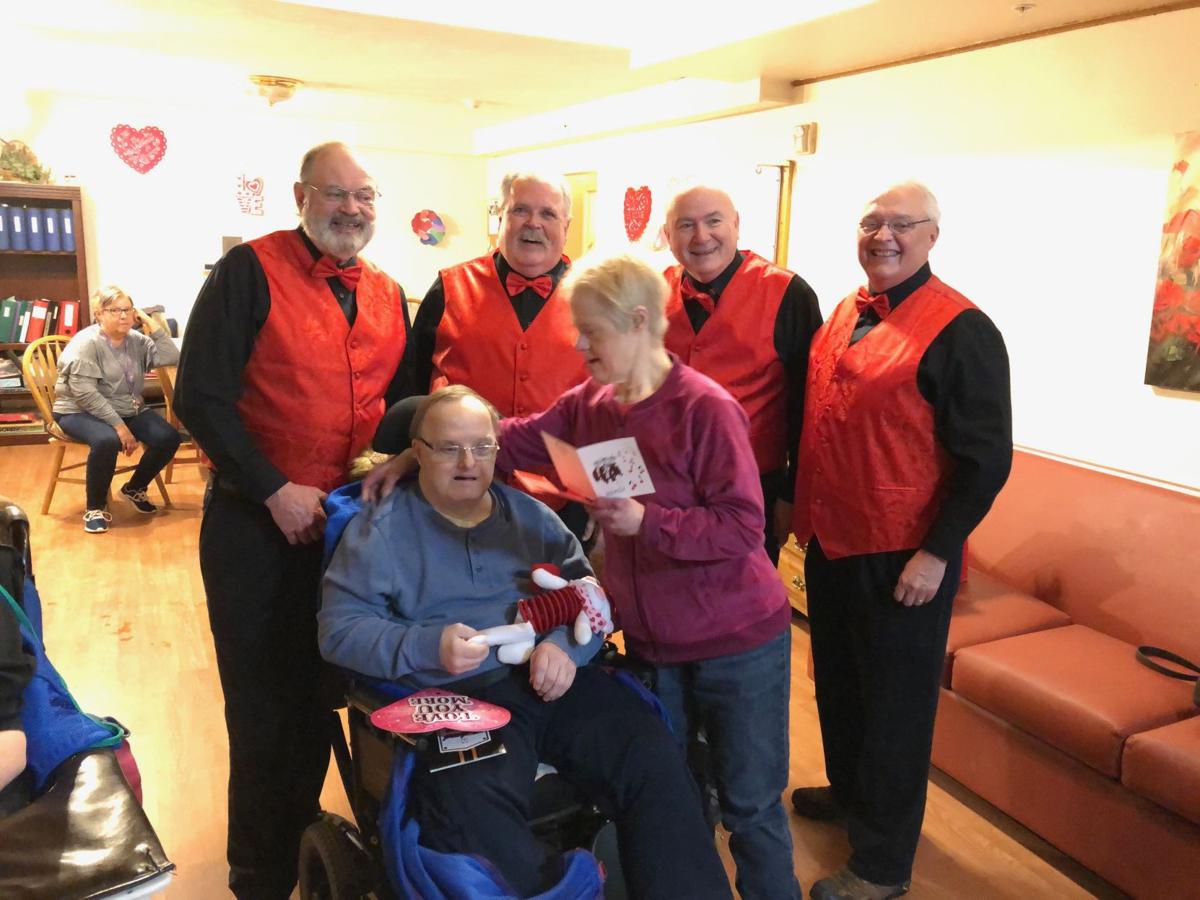 Paul and Kris Scharoun-DeForge on Valentine's Day with the Harmony Katz, a barbershop quartet. (Family photo)

Paul Scharoun-DeForge died last Thursday in Syracuse, from complications related to Alzheimer's disease. He was only 56, and his mother, Lorraine DeForge, said his life was a direct refutation to the warnings some doctors offered to Lorraine and her husband Frank when Paul was born.

"They told us not to expect much," said Lorraine, who recalls being advised that it would be wise to leave their newborn son in an institution, and then to drive away.

Instead, Paul lived a monumental life, and became part of a pioneering and important love story that attracted international attention.

He was born with Down syndrome. In 1994, he married his wife Kris, a young woman he met at a dance. The decision was another step forward within the civil rights revolution that changed the lives of countless Americans with developmental disabilities. Kris, too, was born with Down syndrome, and their marriage of 25 years is believed to have been among the longest in history for two people with that genetic condition.

"What they did," Lorraine said, "cleared the path for other couples."

A year ago, I did a piece in The Buffalo News that documented their longtime commitment. The story was taken to an international audience by such outlets as Readers Digest and Today, underlining just how much this quiet couple had achieved.

As happens to many adults with Down syndrome, Paul began showing signs of early-stage dementia. For as long as possible, Kris Scharoun-DeForge – supported by her friends and family – asked the state to allow the couple to stay together in the apartment in suburban Syracuse where they lived, with staff support.

Finally, Paul's medical problems made that impossible, and he moved into a community residence that provided intensive nursing care. Susan Scharoun, Kris' sister, said he still spent time with Kris, either at his new home or more often at their apartment.

Even in their final months together, the couple had some memorable moments. Last summer, Kris was recovering from pneumonia when Paul stopped to see her on their Aug. 13 anniversary at Upstate University Hospital in Syracuse. They were both in wheelchairs when they renewed their marriage vows in the hospital chapel.

"Watching it, it was like Paul woke up," Scharoun said. "He smiled and reached out and took her hand."

Six months later, on Valentine's Day, Kris, 59, had recovered from her illness and was able to spend the day with Paul. They received a surprise visit from the Harmony Katz, a barbershop quartet that had learned of their extraordinary romance.

As they listened to such favorites as "Let me call you sweetheart," Kris put her arms around her husband.

"She always said to us that when she saw Paul, she saw her future," Scharoun said.

As for Paul, his life bridged an era of great change for those born with developmental disabilities. The infant doctors wanted to put in an institution grew into a high school graduate who mastered the Syracuse bus system, held several jobs and became a familiar civic figure, a guy whose work ethic and selfless nature caused him to be honored as "Person of the Year" in 2013 by ARC of Onondaga.

Kris Scharoun-DeForge has always enjoyed making cards and artwork, and Susan Scharoun said Kris is working on a picture board for Saturday's 11 a.m. memorial service at Immaculate Heart of Mary Church, in Liverpool.

Shortly before his death, she drew a picture of a butterfly that hung on the wall by Paul's bed, with a note telling him how he was "the man of my dreams." Kris learned Thursday from her siblings of her husband's death, and Scharoun said Kris described her grief in this way:

Lorraine DeForge remains grateful for Kris, and for all the support that buoyed her son since he was born. Paul's comfort in the larger community was reinforced early by his bond with his brothers and sisters. It was no surprise to Lorraine that her son Jerry was with Paul at the instant that he died.

"We treated him like he was the world," Jerry said of Paul's relationship with his seven DeForge siblings. "It wasn't like he was Down syndrome or anything else."

They were 14 months apart, close since they both toddled, brothers who learned side-by-side to ride two-wheelers  and shared bunk beds for years in the same childhood room.

"He was my buddy before he was my brother," Jerry said. "Whatever I did, he did, and whatever he did, I did."

That pact held tight until the end, when Jerry sensed what was about to happen. He asked the nurses in the room if it would be all right, then he climbed into bed and held his brother.

Richard Kyte: Why gun owners need a change of heart

Opinion: Why can’t those who own guns and know the most about them take responsibility for ensuring they're used safely and without malicious intent?

After six sisters at Villa Maria died from complications linked to Covid-19 last year, 55 members of the Felician sisters got their second doses of the vaccine this week.

The Ethical Life podcast: Should gun owners take the lead on firearm safety?

Episode 11: Scott Rada and Richard Kyte talk about how their different life experiences frame how they each look at firearm safety. Later, they discuss a recent poll that shows most Americans no longer belong to a church.

Paul and Kris Scharoun-DeForge, as they renewed their vows on their 25th anniversary. (Family photo)

Paul and Kris Scharoun-DeForge on their wedding day, 1994. (Family photo)

Paul and Kris Scharoun-DeForge on Valentine's Day with the Harmony Katz, a barbershop quartet. (Family photo)