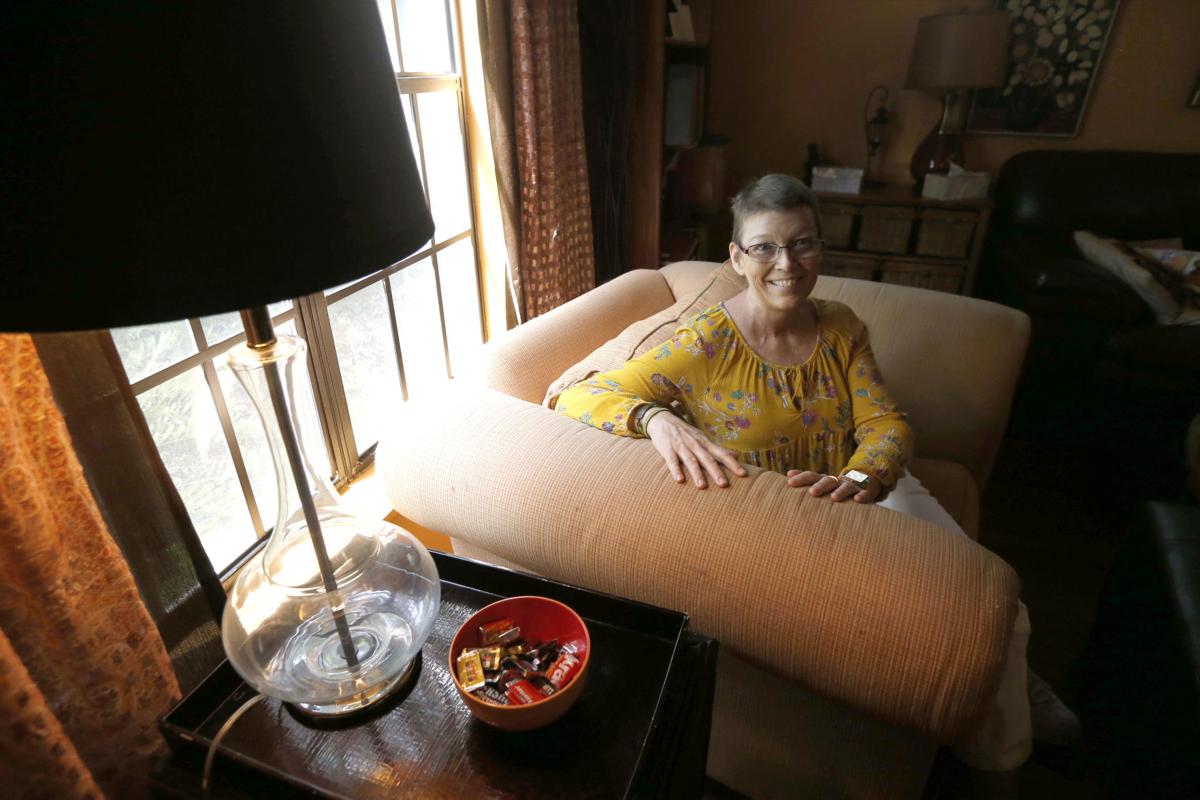 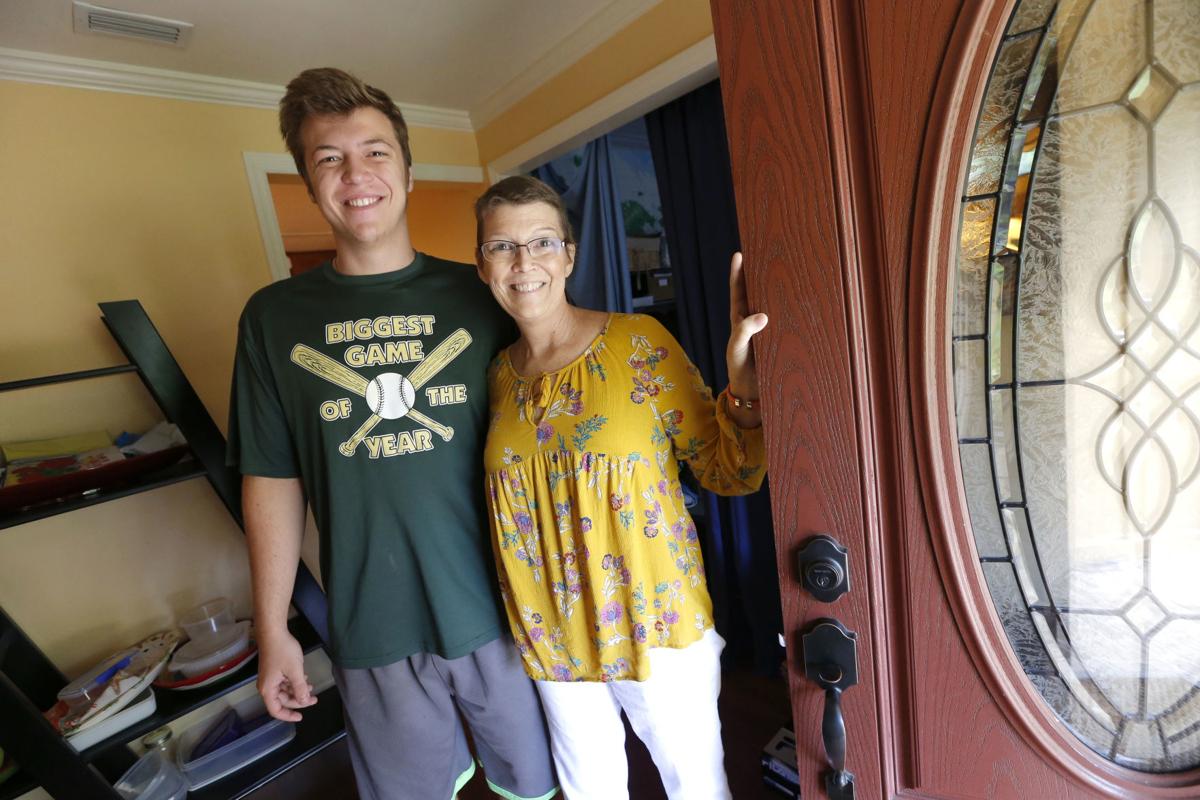 Former Fredonia resident Tammy Guayasamin-O'Dell of Arbor Oaks Dr. in Bradenton with one of her sons, Sam, at her home. This was on Thursday, Sept. 14, 2017. (Robert Kirkham/Buffalo News) 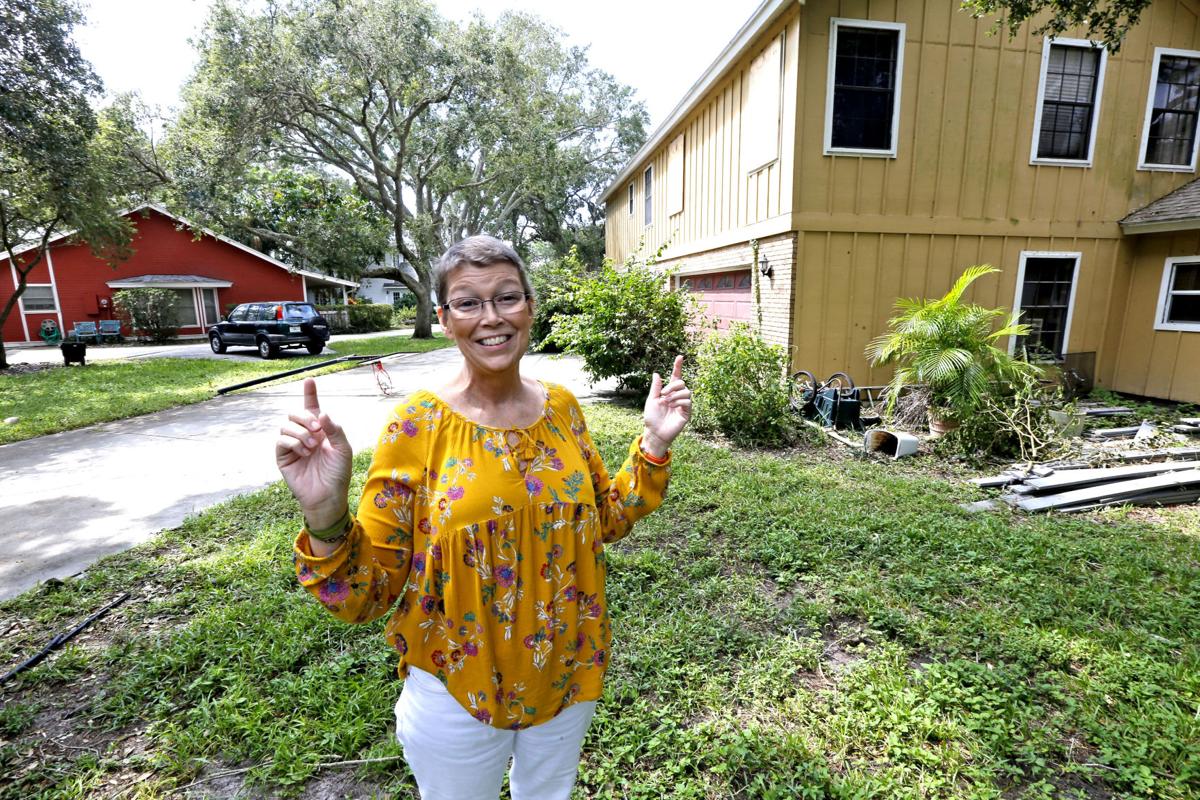 BRADENTON, Fla. - Tammy Guayasamin-O'Dell decided to heed the warnings and evacuate. She reserved tickets for a flight to Buffalo. All she had to do was tap one more button on the keyboard. The tickets would be confirmed, and she'd be ready for a journey to Fredonia, her hometown, where she could safely wait out the fury of Hurricane Irma.

She looked at the screen for a long time, even as the little clock on the ticket offer counted down. This was last week, a few days before Irma careened into Florida. Predictions for the path of the storm kept changing. The roads were beginning to fill with people scrambling to leave the state. Getting out was becoming more and more complicated.

Most important, if Tammy left her Bradenton home, she knew she wouldn't be side-by-side with all four of her sons once the hurricane arrived.

The offer expired. She never touched the key.

Tammy, 55, is coping with stage four cancer. It began in 2014, when she learned she had a tumor in her breast. The doctors performed a mastectomy they hoped would free her from the disease.

The cancer returned with new ferocity, Tammy said. She is in chemotherapy, treatment provided by a doctor she considers a good friend. He is frank with her. He's told her to take her illness day by day, but he also said: "This is the time for making memories."

Tammy thought it over. She sees wisdom in his advice, but not because she's in despair about her cancer.

It is the way everyone ought to live, all the time.

"What all of this shows is how strong people are," Tammy said, reflecting on both her illness and the hurricane, "and that you don't know how strong you can be until you have to be."

Testing that strength is elemental to her character. In 1981, at 20, Tammy left Fredonia to move to Florida with two close friends. One friend's father bet her $500 she wouldn't last two weeks. He was right about her roommates. They left for home long before they met that deadline.

Tammy stayed and won the bet, even if she never made the guy pay up. She became a teacher in Florida who worked with at-risk students, often from the migrant community. She left that career to be a stay-at-home mother after she married — eventually, she'd be divorced — and she spent years as director of the lunch program at her children's school.

She faced it, as with all things, by looking ahead.

Tammy speaks with confidence about attending her high school reunion this summer. She intends to be there for major events in her children's lives. She speaks with hope of innovations in therapy, and she concedes nothing to this cancer.

Yet Irma interrupted Tammy's chemotherapy. A few weeks ago, she was so weak from chemo that she could barely stand. Her doctors, knowing she might need to evacuate, postponed her next treatment. Tammy regained her strength, but sees it as a mixed blessing.

"As brutal as it is, I don't like to miss chemo," she said. "It's been knocking two of my tumors down."

Her oldest son, Alex, 23, described that response as typical.

"She's the strongest person I've ever seen," said Alex, a student at the University of South Florida.

He realizes his mother could have gone to Fredonia last week and stayed with friends, and that she decided against it only so she could be with all her boys – Alex, Sam, Max and Harry – once the hurricane blew in.

Alex recalled a morning, not so long ago, when he needed a ride home from college. Tammy already knew her cancer was at stage four. She was in the middle of the most painful struggle of her life, gaining power of attorney over her own mother, who'd fallen deep into dementia.

His mother, as a girl, was an only child. Tammy's mother and stepfather, Guido and Deborah Guayasamin, raised her in Fredonia. Her parents never said anything about her birth father. It was a mystery that lingered in the house, a mystery Tammy always wanted to solve.

Guido died four years ago. Now Deborah Guayasamin is being treated for Alzheimer's. Tammy, who delayed her quest out of respect to them, no longer had to worry about inflicting any hurt. She scoured old documents that led her to a moment of revelation:

The man she was seeking was Jim Best, 81.

Her father was living in Lakeland, Fla., maybe 90 minutes from her house.

Best reacted as she hoped he would. He and his wife, Carrie, responded with grace and warmth. Best, a retiree from the Army, told Carrie how he and Deborah were married for a short while almost 60 years ago, and that she never revealed to him that she was pregnant. By the time he knew for sure, she no longer wanted contact.

Through Best, Tammy also met a half-brother for the first time.

"They answered questions I'd had my whole life," Tammy said.

As for Best, reached by telephone Friday while in Missouri, he said simply:

He is proud of his daughter's courage.

The hurricane, to Tammy, became part of the same resolve. On the day Irma hit, on the urging of some friends, her family took shelter in the office of an orthodontist they'd known for years. No one could be sure how bad Irma would be, and the orthodontist's building had strong concrete walls.

Tammy tried to sleep. Staying calm in front of her boys, she said, was a chance to live out another lesson.

"The last four years have been the hardest of my life," she said, "but you have to listen, and keep your sense of humor, and remember that your kids look to you for leadership."

They locked up the building and waited out the storm. The hurricane blew with a kind of violent roar they had never heard before, and a nearby transformer started sparking with a strange blue light.

Once the storm faded away, Tammy and her boys shared in the same feeling:

Driving home, they saw some trees knocked down along the road, but they arrived at a house that suffered no real damage. Sam, who played club baseball in college, went straight to the back yard. Long ago, three tall oaks had served as makeshift bases for a diamond.

Despite the wind, those trees were still standing.

It was a joy, but not a shock. He'd seen that kind of strength before.

Twenty years on, an American Muslim reflects on the terror attacks that changed everything

Our commitment to homeland security, while preserving the civil rights and civil rights of all Americans, is unshaken, said Khalid J. Qazi, inaugural president and senior adviser of the Muslim Public Affairs Council of WNY.

Former Fredonia resident Tammy Guayasamin-O'Dell of Arbor Oaks Dr. in Bradenton with one of her sons, Sam, at her home. This was on Thursday, Sept. 14, 2017. (Robert Kirkham/Buffalo News)