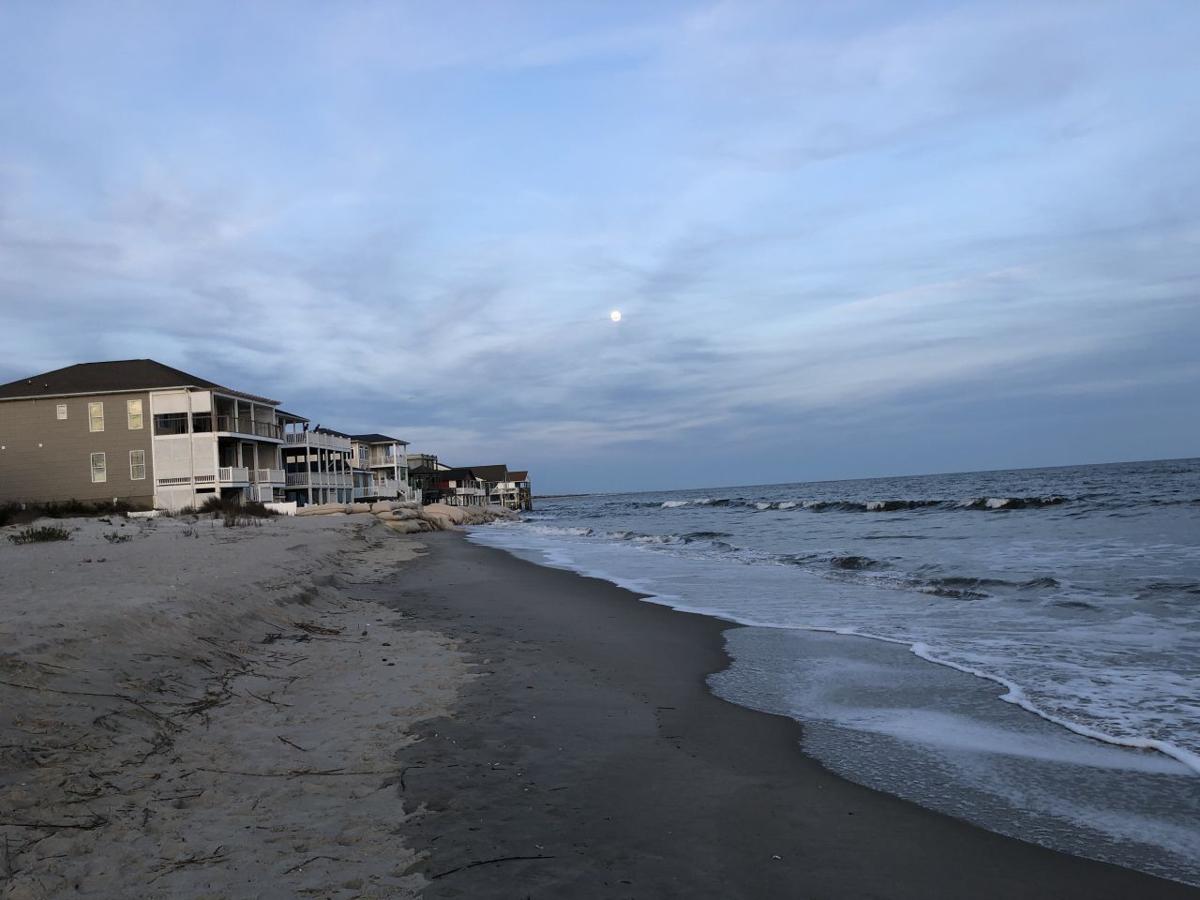 This photo of oceanfront homes on a beach on the Outer Banks of North Carolina doesn’t illustrate sea level rise to a casual visitor, but residents of Ocean Isle Beach know there used to be two blocks of homes in front of the current row of homes. (NASA) 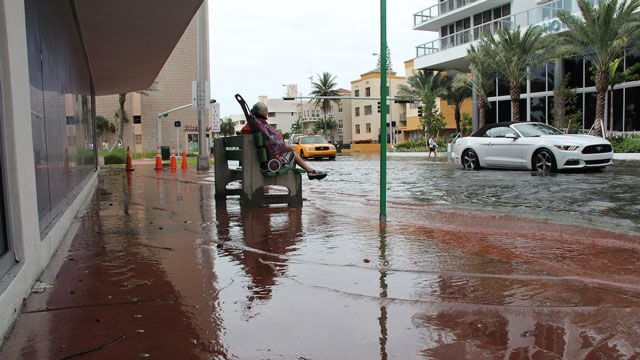 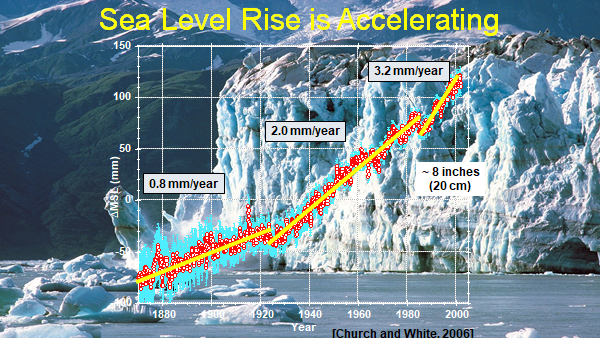 Sea level rise is fed by two primary mechanisms, both tied to global warming. There is the melting of freshwater ice from glaciers, the Greenland ice shelf, and continental peripheral ice from Antarctica. And, there is expansion of ocean waters from heating as the oceans warm, since water volume increases with that heating. The rate of rise is not uniform around the globe. Cold currents and cold pools of ocean water hold back the rise in some locations, and land subsidence (sinking) increases the sea level rise impacts in other locations. The sea has risen 3 inches at Ocean Isle Beach, N.C., since the early 1980s. Such a rise, averaging 3.3 millimeters (0.13 inch) globally per year can be hard to eyeball, especially for visitors.

NASA-Jet Propulsion Laboratory oceanographer Josh Willis puts the rise in perspective: “You may not be able to eyeball sea level rise at your local beach, but its effects are being felt in many ways. Willis says a good rule of thumb is that every inch of sea level rise results in the loss of about 2.5 meters (100 inches) of beach, though recent studies suggest beach losses around the globe could happen even faster.”

The rate of sea level rise is increasing, because global warming is increasing. The current rate is considerably faster than in the cooler 1970s, and the rate in the 2020s and 2030s will continue to increase.

Ice will continue to melt faster and water will expand from heating faster. If the current rate of .13 inch annually sounds small, here is another way to express the volume: “Thanks to satellite and tide gauge data, we know that sea level is rising about 3.3 millimeters (0.13 inch) a year, a rate that grows by another 1 millimeter (0.04 inch) per year every decade or so,” Willis said. “Each year, global warming is currently adding about 750 gigatonnes of water to the ocean – enough to cover my home state of Texas about 1 meter (more than 3 feet) deep. We can’t really eyeball a few millimeters of sea level rise a year just by looking at the ocean because of waves, tides, etc. But we can definitely see the effects of it, both short- and long-term.”

Sea level rise is already responsible for widespread “sunny day flooding” at high astronomical tides in many coastal locations around the globe. Such flooding occurs regularly in many locations, unrelated to ocean storms, where it didn’t occur a few decades ago. As an example, Miami Beach is spending $400 million over a five-year period to raise and improve infrastructure, pumping stations and drains.

Some parts of the coastline are more vulnerable to sea level rise flooding because it coincides with land subsidence, as seen in south Florida and Louisiana, and some of the subsidence is due to land use and freshwater extraction. The variability can be seen on the southeast and Gulf coasts in this NASA map.

The Mid-Atlantic Coast is also vulnerable to higher risk as well as many portions of the Pacific coastline, as seen in this U.S. Geological Survey map.

Of course, higher sea levels also worsen the impacts of storm surges from coastal storms and tropical cyclones. Beautiful Ocracoke Island, a barrier island south of Hatteras, N.C., suffered unprecedented damage from Hurricane Dorian’s storm surge late last summer on both the Atlantic side as the storm approached and the Pamlico Sound side as Dorian pulled away. There is no doubt the higher sea level contributed to the devastation, though it would be difficult to calculate the precise percentage related to that factor.

These impacts are also enormous on many island nations in the South Pacific with sea encroachment threatening the very existence of infrastructure. Some nations and locales have the resources to undertake evacuation and relocation, but other poorer nations with large coastal floodplains cannot consider these options because they lack the resources to do so.

With continued acceleration in the rate of rise, impacts are already worsening at a faster pace in this century. Rising seas are threatening barrier islands, coastal plains and wetlands, coastal ports such as Norfolk (home of our largest Navy base) in Virginia, and Long Beach and Los Angeles in California. Combined with land subsidence (related to tectonics and the retreat of the last ice age’s ice sheets), much of the coast from Virginia to New Jersey is experiencing more rapid sea encroachment. Sea walls constructed to withstand 100-year floods are now being threatened by 10-year events.

The costs of building new infrastructure to better withstand coastal flooding may seem out of reach. Just looking at what New York metro area leaders have to contemplate makes the point.

But because the continued rise of sea levels is inexorable, calculations on the costs of not taking protective actions tremendously eclipse the costs of new infrastructure. Since we know the best we can do is to slow the rate of warming, structural mitigation has become part of budgetary planning by states, regions and the federal government, as well as by many other nations.

NASA sums up the big picture in this short video:

This photo of oceanfront homes on a beach on the Outer Banks of North Carolina doesn’t illustrate sea level rise to a casual visitor, but residents of Ocean Isle Beach know there used to be two blocks of homes in front of the current row of homes. (NASA)