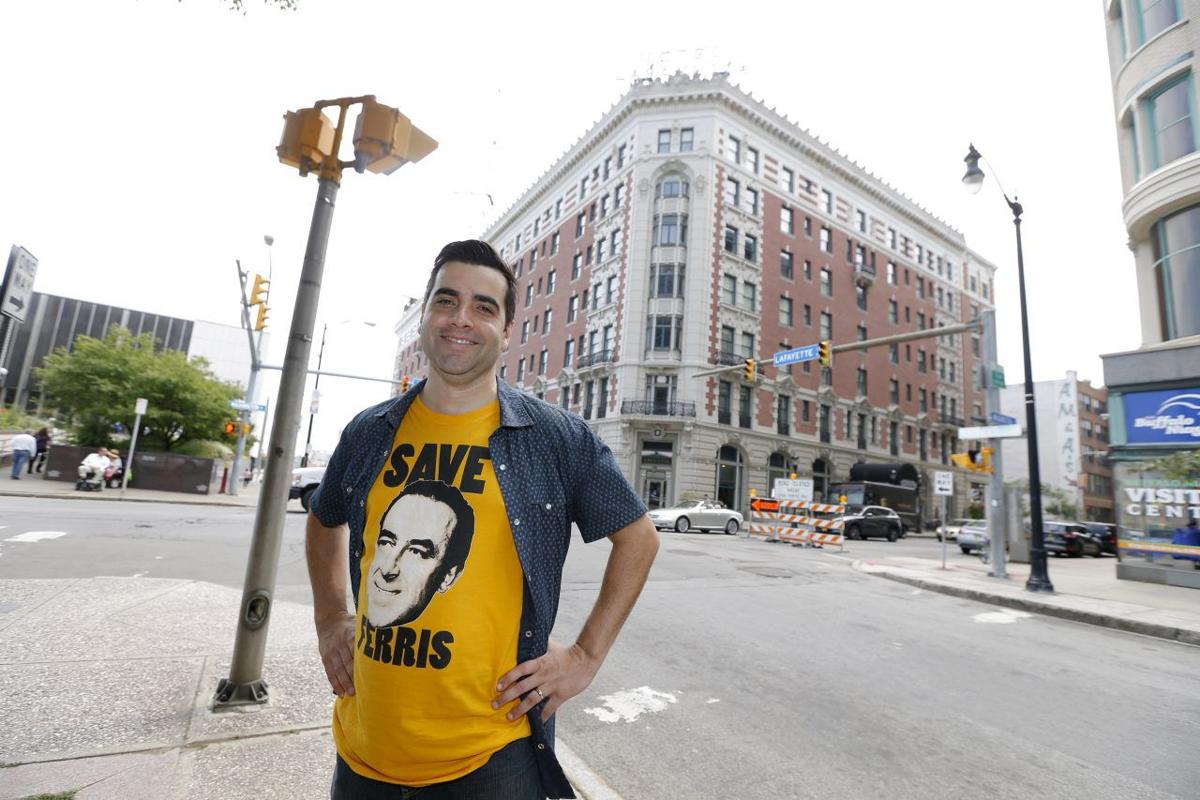 Christian Figueroa stands outside the Hotel @ The Lafayette, where his great-uncle, Leo Ferris, convened a key early meeting of National Basketball League owners in 1946, three years before Ferris played a key role in the creation of the National Basketball Association. (Robert Kirkham/Buffalo News file photo) 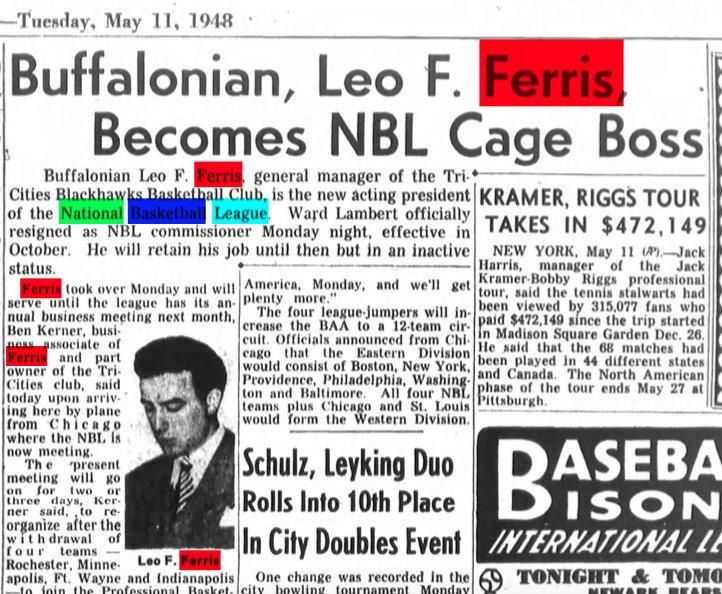 Whitey Von Nieda has a sense of wonder about it all. He is 97, and he learned recently that he is now the longest-lived of all the players who ever competed in the National Basketball Association.

For a couple of reasons, that has meaning to Buffalo. As Von Nieda pointed out by telephone last week, he played for the Tri-Cities Blackhawks of the old National Basketball League only two years after they left their first home in Buffalo for Illinois, long before they evolved into today’s Atlanta Hawks.

He was also scouted and signed by Leo Ferris, a Buffalo businessman at the heart of a milestone Von Nieda remembers vividly: Ferris was central to the merger that created the NBA, whose 70th birthday celebration ought to be this month.

There is only one problem, and it may be keeping Ferris out of the Naismith Memorial Basketball Hall of Fame, even though he has made the list of finalists several times.

For reasons baffling to Von Nieda and many others, the NBA does not openly admit to its true birthday.

“It’s sad and it’s comical,” said Bill Himmelman, who for years was the official NBA historian.

Changing that situation has turned into a deeply researched family mission for Christian Figueroa, an actor and opera singer from Boston who has performed at Carnegie Hall, sang the national anthem at Fenway Park and is also a great-nephew of Ferris.

The photo shows five men in a celebratory huddle. In the middle is Maurice Podoloff, president of a newly formed basketball league. He is surrounded by legendary basketball executives, including Ike Duffey of the Anderson Packers, Ned Irish of the New York Knicks and Walter Brown of the Boston Celtics.

Behind Podoloff, in the middle of it all, is a grinning Ferris, whose relentless pursuit of the game’s top players caused the old Courier-Express to describe him as "the guiding genius" in forcing the Basketball Association of America and the NBL to merge into a league with a new name.

Seventy years ago this summer, they called their new league the National Basketball Association, or the NBA. Until that happened, the NBA did not exist. By any logical conclusion, the league’s 70th birthday is Saturday.

Good luck trying to get the NBA to admit it publicly.

“Hi, Sean. Established June 6, 1946,” a league communications officer wrote last month in an email, a date that marks the beginning of the BAA. Earlier this year, the league responded to the same question by ignoring it and speaking instead of a 75th anniversary celebration in 2021.

Von Nieda, who was there when it all happened, laughs in disbelief.

“This was a merger,” he said. “This was a new league. Until then, the National League and the BAA were two separate and competitive leagues.”

The NBA's public response differs from the evidence of its online timeline, which says the two leagues merged "to form the NBA" in 1949.

Himmelman, a New Jersey basketball historian, does not mince words.

“Bogus,” he said, of the NBA's contention that 1949 represented an expansion, not a new league.

That delusion, he said, dates to 70-year-old bitterness between then-warring leagues. Since Podoloff, who had been the BAA's commissioner – and the target of fierce barbs from the rival NBL – stayed on as top administrator, it gave him and others from the BAA the chance to spin history their way, Himmelman said.

The problem is, that kind of grudge means the achievements of worthy people can be lost – including Ferris, whose cometlike basketball career changed the game’s trajectory. He founded the Buffalo Bisons, then moved them to Moline. He brought another Buffalo guy into basketball, Ben Kerner, who would win an NBA title as owner of the Hawks in St. Louis before the team moved to Atlanta.

Ferris was also an NBL executive whose shrewd player raids – especially signing the entire “Fabulous Five” of Kentucky, and then giving them their own Indianapolis franchise – finally dragged the big guys of the BAA to the merger table.

Their payback, 70 years later, is diminishing the importance.

Himmelman said BAA officials – with big-city teams in New York, Philadelphia and Boston – always gritted their teeth about the notion of merging into one league with teams in much smaller cities, such as Sheboygan or Syracuse. Certainly, BAA administrators did their best to keep the upper hand.

In the merger, they maintained their Empire State Building office and wiped out many NBL records, which in hindsight was a self-destructive gesture. As noted by historian Curtis Harris of Twitter's "Pro Hoops History," the NBL had a groundbreaking heritage the NBA should be eager to claim today.

It was the NBL, not the BAA, that took the first steps toward bringing in African-American players – including a big moment in Buffalo, where Ferris signed the great William "Pop" Gates.

Bottom line: The NBA was born through a merger, and the name itself was the symbol. The late Leonard Koppett, a renowned journalist whose “Twenty-Four Seconds to Shoot” chronicles the early history of modern pro basketball, spent a chapter in that book talking about it.

While he described the agreement as the BAA “taking in the National League survivors,” he also said the merger “conclusively altered” the makeup of pro basketball.

Thus the NBA, as underlined by a wealth of clippings discovered by Figueroa.

“By not acknowledging the merger,” Harris said, “you have these really important people who are lost to history.”

The new league, Harris said, had 10 teams from the BAA and seven from the NBL. He said it is important to remember what happened a season earlier, when four NBL franchises – including the Minneapolis Lakers and Rochester Royals, which quickly became two of the elite teams in the new league – “jumped” to the BAA.

Buffalo was pivotal for a different reason: It was home to Ferris, an Elmira native who came here to work for the Jacobs family, then started a small advertising company.

While Ferris moved the NBL Bisons to Moline in 1946, he lived and worked  in Buffalo until 1950, Figueroa said – at which point he took over as general manager of the Syracuse Nationals. Four years later, he joined team president Danny Biasone and Emil Barboni, a Syracuse scout, in convincing the league to embrace a 24-second clock that historians say saved the pro game by making it fast, higher-scoring and fun to watch.

Contemplate that. Ferris founded the Atlanta Hawks, was a key guy in creating the NBA and was central to bringing about the rule change that transformed basketball.

Yet he is not in the Hall of Fame, maybe because the greatest basketball league on Earth will not acknowledge the core moment of its own creation.

“I feel the NBA has long been insincere regarding its (date of birth),” wrote Bijan C. Bayne, an author and historian, in a note last week - for reasons, he wrote, that may have included "intentional erasure of the precursor NBL."

For Figueroa – and, by extension, for Buffalo – the exclusion feels personal. Figueroa has found clippings that speak of a “secret” meeting between top officials from the two leagues at the old Statler in May 1947, an early step toward a merger. That summit was held around the corner from where Ferris worked, near City Hall.

The hardest part of it, Figueroa said, involves a tragedy compounded by Huntington’s disease, which killed Ferris and three of his children. He left basketball in the mid-1950s and had little chance to defend his legacy when it mattered, decades later, because Huntington's overwhelmed him.

“This is important not only historically,” Figueroa said, “but because it honors our own blood.”

To Von Nieda, it is not even a question. His perspective is as good as it gets: He learned he was the NBA's oldest player when he was contacted not long ago by Mike Wilk, who runs a website called the Peach Basket Society.

Since Von Nieda came out of the NBL, the merger is the whole reason he has that status.

Ferris was “very progressive,” said Von Nieda, who remembers the novelty of playing such opponents as the Knicks once the merger happened. As for his own ranking as the oldest player of them all, Von Nieda said, “I’ll hold that title for as long as I live.”

He embraces his true birthday, which puts him a step ahead of the NBA.

Hank Williams was the first Black player within the tightknit chain of leagues that led directly to the National Basketball Association.

Christian Figueroa stands outside the Hotel @ The Lafayette, where his great-uncle, Leo Ferris, convened a key early meeting of National Basketball League owners in 1946, three years before Ferris played a key role in the creation of the National Basketball Association. (Robert Kirkham/Buffalo News file photo)