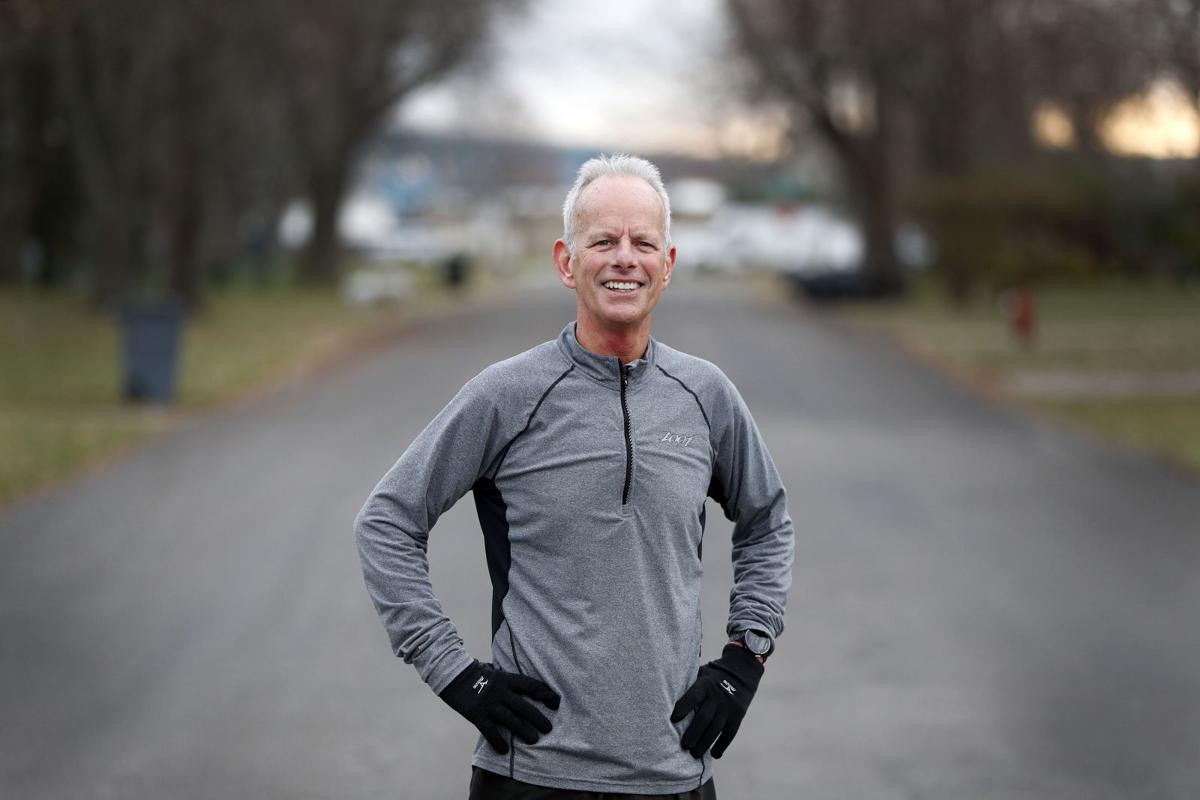 Bob Merritt finishes a training run on Grand Island for the Turkey Trot. His donation of a kidney as part of a paired donation helped his sister-in-law, Eileen Klein, receive a transplant that may add decades to her life. (Mark Mulville/Buffalo News) 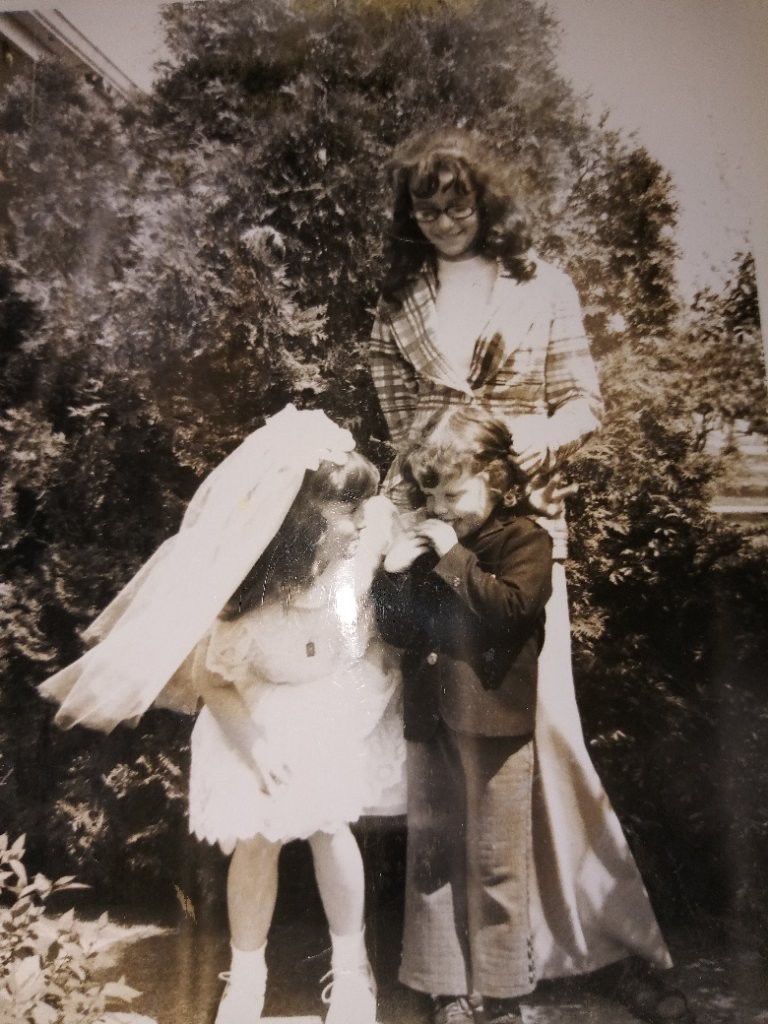 The Klein sisters - of whom would need kidney transplants - in childhood: Nora is standing at back, Patti is in the First Communion dress and Eileen is the youngest. (Family photo) 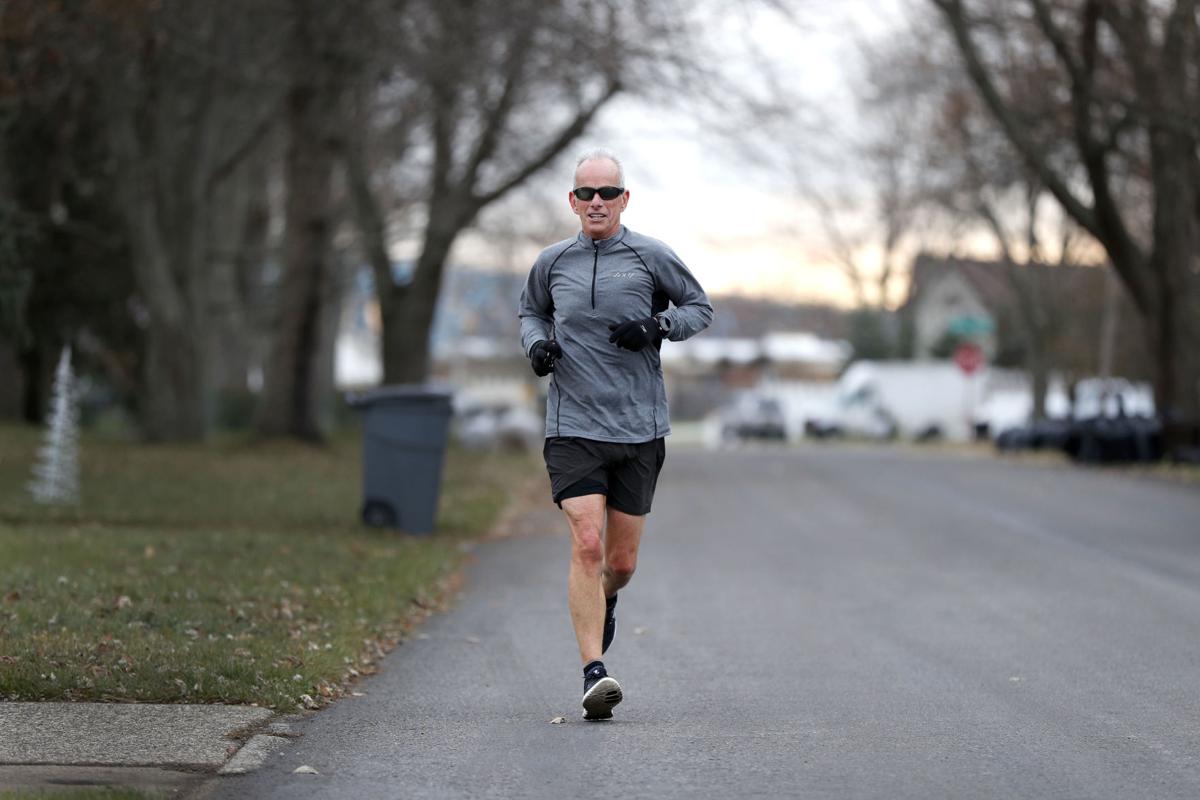 Bob Merritt in training: As meaningful a Turkey Trot as he has ever done. (Mark Mulville/The Buffalo News) 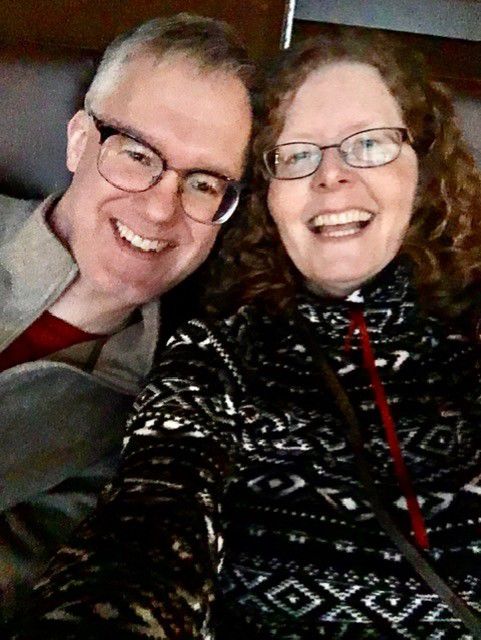 For years, Bob Merritt has looked forward to the annual YMCA Turkey Trot in Buffalo. At 62, he is one of the finest runners in his age group in Western New York, a guy who loves doing good-natured battle with close friends as devoted to running as he is.

Merritt will be at the starting line again Thursday morning, amid celebrants in neon sweaters, turkey outfits or strapped up with flashing lights. Yet this is the rare time when he has absolutely no chance of taking his division, even if his family would emphasize this point.

Not quite nine weeks ago, in a surgical procedure in Baltimore, Merritt donated a kidney to an unknown recipient as part of what is called “a paired donation.” Because of that decision, his wife Patti's sister, Eileen Klein, received a kidney in that same week from a donor in Maryland who remains anonymous.

Klein, a Grand Island native, just turned 50. For generations, polycystic kidney disease has been a harsh genetic heirloom in her family. She watched her father die in his 50s, after years of dialysis. Her grandfather died at 44 and his mother at 48. Klein's two older sisters, Nora and Patti, were both transplant recipients as young women.

Without a new kidney, Klein almost certainly would have lost decades from her life. Instead, she is feeling immediate benefits. Klein can walk up the stairs without gasping for breath. She no longer fears a repetition of the brain aneurysm and surgery she endured last year, a byproduct of the disease.

Klein is also enjoying simple treats she had to give up long ago. After surgery, the first thing she requested was ice cream. On Thanksgiving, instead of a turkey for dinner, she and her boyfriend, Springville native Jim Canavan, intend to prepare lasagna – a beloved meal Klein was told for years she could not eat.

Asked to define Thanksgiving, she wept as she spoke of the two donors.

The tale really begins with her Grand Island childhood. When Merritt was young, his parents lived across the street from Ann and Francis Klein and their children, on Enola Road. Merritt was seven years older than Klein's sister Patti, and their romance did not spark until they were in their 20s, when he returned from time to time to “hang out with my folks.”

He knew Patti’s dad struggled with his health, but it was not until Merritt and Patti became a couple that he understood the magnitude of the genetic burden. Patti's oldest sister, Nora, had already received a kidney donation, a life-changing act of kindness from Paula McDonnell, a neighborhood friend.

As for Patti, she knew at 24 that she had the disease, and by her early 30s the doctors told her she needed a transplant. Merritt's sister Lynn is a nurse whose kidney was compatible. With her medical background, she understood the stakes.

Sean Kirst: Woman who survived thanks to organ donor wants to help others

Like her sister, Patti cannot fully put her gratitude into words. She spoke of a sense of responsibility once you “receive something so big” that led her to found the Western New York Kidney Connection, an organization dedicated to inspiring donations for those facing the same situation.

As for Klein, she is a longtime employee of Wegmans. Eight years ago, the grocery chain agreed to transfer her to a store in Maryland after Canavan took a job in Baltimore, where Klein's disease began to accelerate.

“I was absolutely exhausted all the time,” she said. The doctors told her she was moving toward dialysis, the treatment that replicates the function of the kidneys but demands a life-altering dependency.

Last March, one of her cousins – who had hoped to donate a kidney – learned she was not a match. Klein's sister Patti was in her Grand Island living room when the cousin called with that news. "She was really broken up about it," said Merritt, who was sitting with Patti during the conversation.

When she got off the phone, he looked at her and said: “I’ll do it.”

Since his blood type did not match Klein's, he was speaking of a paired donation, a growing movement that is also available in Buffalo through the Erie County Medical Center. By agreeing to donate to an unknown recipient, Merritt put Klein in a position to more quickly receive a kidney in the same way.

His decision, he said, was tied to need and appreciation. His wife’s vitality is based directly on his sister’s willingness to donate. He and Patti have a daughter, Elizabeth, who also inherited the disease, and someday she, too, might depend on the courage of a donor.

Merritt, a serious runner for almost 50 years, loves the raucous nature of the Turkey Trot. A year ago, he finished third in the 60-to-65 division of the race, running a pace of 6:32 miles, which to him – imagine this – was disappointing.

By comparison, he ran a 6:14 mile pace in 2017 that not only put him first in his age group at the Trot, but left him 125th out of roughly 12,000 finishers in one of the most venerable foot races in the nation.

A half-century of training is lifting him in a quick recovery. He was running within four weeks of getting off the table. Merritt, a marketing manager at Kimberly-Clark, is still "slightly impacted" by the surgery, as he put it, and he is not ready for his usual fast Thanksgiving duel with close buddies who run at the same high level that he does.

This year, he has entirely different motives for entering the race.

Eileen Klein, for her part, hopes to return to work on the day after Christmas. While she will take a handful of pills each day for the rest of her life, she sees it as a tiny inconvenience compared to what awaited her without surgery.

She witnessed what kidney disease did to her dad. The illness swept across him when he was in his 40s, causing years of suffering. He eventually received dialysis at home, and Klein left college to support her family during that hard period.

Her father died in middle age, at 56, a shadow that fell over his daughters before their transplants.

The woman whose kidney Klein received chose anonymity, and Klein was told little of her story. Klein knows only that her donor was a woman who was aware of the desperate need, and was willing to give up a kidney without any idea of who would receive it.

In the end, Klein speaks of how Merritt's selfless choice was key. His kidney is making it possible for a stranger, somewhere, to enjoy the revelation of a second life. Eileen's voice broke again as she offered a vow, promising a lifetime's worth of volunteer service as a means of gratitude.

During her childhood, she always loved family drives for great Italian food, whether that meant cannolis from DiCamillo’s in Niagara Falls or spaghetti from Santasiero’s in Buffalo. Today, finally, she will again savor lasagna, and she can already guarantee one result from this year's Turkey Trot, before it even starts.

Bob Merritt, on Thanksgiving, is her defending champion.

Analysis: A stunner in the Erie County sheriff's race

Had a Karen Healy-Case/Kim Beaty matchup for sheriff materialized, lots of national attention would have centered on Erie County for an unprecedented all-women matchup.

"The messy, slippery Monday morning snow was triggered by the approach of a warm front," writes Don Paul.

"The soul" of the old Buffalo Braves, and a beloved presence in Buffalo's African-American neighborhoods in the 1970s, deserves a statue in Buffalo.

"As long as I've been here, I've never seen anything like this," said Tara Voorhies, a Kenmore native who moved to Houston almost 10 years ago.

"In a different world, Sister Mary Owen's funeral would have packed a church, with hundreds who loved her belting out her beloved Irish songs," writes Sean Kirst.

Eight years after New York passed the tough gun control law that restricts criminals and the mentally ill from buying guns while banning some assault weapons, the controversy continues.

Rod Watson: When it comes to literature, race and gender, comfort zones are overrated

If "Of Mice and Men" makes you uncomfortable reading it, imagine how uncomfortable it was living it – or living with the vestiges of such practices today, Watson says.

Sean Kirst: A barber whose Buffalo life was one long Valentine's Day, with 'Mariu'

On this Valentine's Day, a widow remembers the 60-year love story that ended when Covid-19 stole the love of her life.

Western New York has long been decisively Fox News territory in the cable news wars. But that changed dramatically after the election of President Biden.

Bob Merritt finishes a training run on Grand Island for the Turkey Trot. His donation of a kidney as part of a paired donation helped his sister-in-law, Eileen Klein, receive a transplant that may add decades to her life. (Mark Mulville/Buffalo News)

The Klein sisters - of whom would need kidney transplants - in childhood: Nora is standing at back, Patti is in the First Communion dress and Eileen is the youngest. (Family photo)

Bob Merritt in training: As meaningful a Turkey Trot as he has ever done. (Mark Mulville/The Buffalo News)