Subscribe for $1
Read Today's E-Edition
Share This
Janet Hook: With a volatile US electorate, no one can predict what’ll happen in November’s midterms
0 Comments
Share this 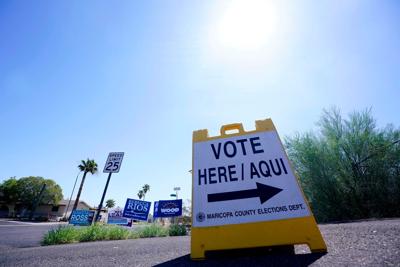 In Maine, where I spend part of every year, the weather is highly changeable, so we like to say: If you don’t like the weather, don’t worry — just wait a few hours and it will be different.

That insight may apply to the political climate surrounding November’s midterm elections.

Just think about how much has shifted, how quickly and unpredictably, over the course of this election cycle. In spring 2021, who was worried about inflation? A couple of months ago, who would have thought a gridlocked Congress would produce a gusher of legislation? Raise your hand if you expected big bipartisan votes in favor of abortion rights (in Kansas!) and same-sex marriage (in the U.S. House!). I’m old enough to remember when everyone was certain the 2022 midterms would be a referendum on Democrats’ COVID policy.

This much is unchanged: Democrats are still underdogs, dragged down by President Joe Biden’s low approval rating, GOP gains in redistricting and historical precedent. The president’s party typically loses big in midterm elections.

But ever since Donald Trump was elected president, the honest response to questions about America’s political future has been: “Who knows?” That’s a good reason for Democrats to remain hopeful and for Republicans to remain on guard, even though the midterm cards are still heavily stacked against Biden’s party.

Doyle McManus: Donald Trump gets in the way of a GOP takeover

When I covered the 2016 presidential election for the Wall Street Journal, it was a sobering lesson in journalistic humility. I was so gobsmacked by Trump’s victory, it left me wondering if I knew a thing about the country that I’d covered for four decades as a political reporter and Washington correspondent.

I’m eating crow again, as many of my early assumptions about the 2022 midterm elections are taking a beating.

“It’s the pandemic, stupid.” That was conventional wisdom about Democrats’ political woes throughout 2021. Their fate seemed bound inexorably to the drive to vanquish COVID-19. Now, not so much. COVID is still ripping through the country, but it has been relegated to the margins of voters’ concerns.

In a Gallup survey in July, only 1% of Americans mention COVID-19 as the most important problem facing the country. That compares with 20% in January, and 45% in April 2020. Instead, Americans cited inflation and dysfunctional government or poor leadership as the nation’s top problems.

Meanwhile, an NBC News poll found that “threats to democracy” topped even inflation as the most important issue facing the country. The poll did not define “threat to democracy,” but respondents in both parties cited concern. Presumably Republicans and Democrats were divided over whether the threat comes from former President Donald Trump or his adversaries.

These surveys paint a portrait of a volatile electorate in a turbulent world, where preoccupations and priorities are rapidly changing. Concern about inflation is a huge political problem for Democrats because voters tend to blame the party in power for their economic woes.

But intensified focus on abortion could help Democrats. For decades, it wasn’t a priority for most voters and mobilized only the activist minority in both parties. In the wake of the Supreme Court decision overturning Roe v. Wade, however, the context has changed. The landslide win for abortion rights in GOP-dominated Kansas is a sign that we are now in uncharted territory. In June, Gallup reported that 27% of U.S. voters — a record high — said they would vote only for a candidate who shares their views on abortion; a record low, 16%, said abortion would not be a major issue.

Another summer game-changer: Congress churned out a spate of legislation and ended the legislative drought that gripped Washington after Biden got his infrastructure bill passed last November.

Notably, much of that work was bipartisan, including bills to shore up the microchip industry, impose new gun safety measures, improve veterans’ health care and expand the North Atlantic Treaty Organization.

In a surprising show of bipartisanship, the House passed a bill to protect same-sex marriage rights with support from 47 House Republicans. And the Inflation Reduction Act, Biden’s landmark climate and health policy bill declared dead in July, was signed into law in August.

Those accomplishments may not bail out Democrats at the polls. A productive legislative session was no safeguard against midterm losses for the Democrats in 1994 and 2010, when their party was in control of the White House.

But it may have helped get Democrats more engaged. Earlier this year, the share of Democratic voters who identified as “very interested” in the election lagged behind Republicans by as much as 17 percentage points. Now, the difference is only 2 points.

Still, Democrats cannot afford to get cocky. The NBC News poll is riddled with other findings that bode poorly for the party in power: More than 70% of Americans say the nation is “off on the wrong track.” And 58% of voters say, “the country’s best days are behind us.”

But who knows how things will look in November? It may be better for Democrats, it may be worse. But rest assured: It will be different.

Hook is a former national political reporter for the Los Angeles Times: @hookjan.

Doyle McManus: Donald Trump gets in the way of a GOP takeover

Two months ago, as Americans began their summer vacations, the political landscape looked bleak for Joe Biden and his Democrats.