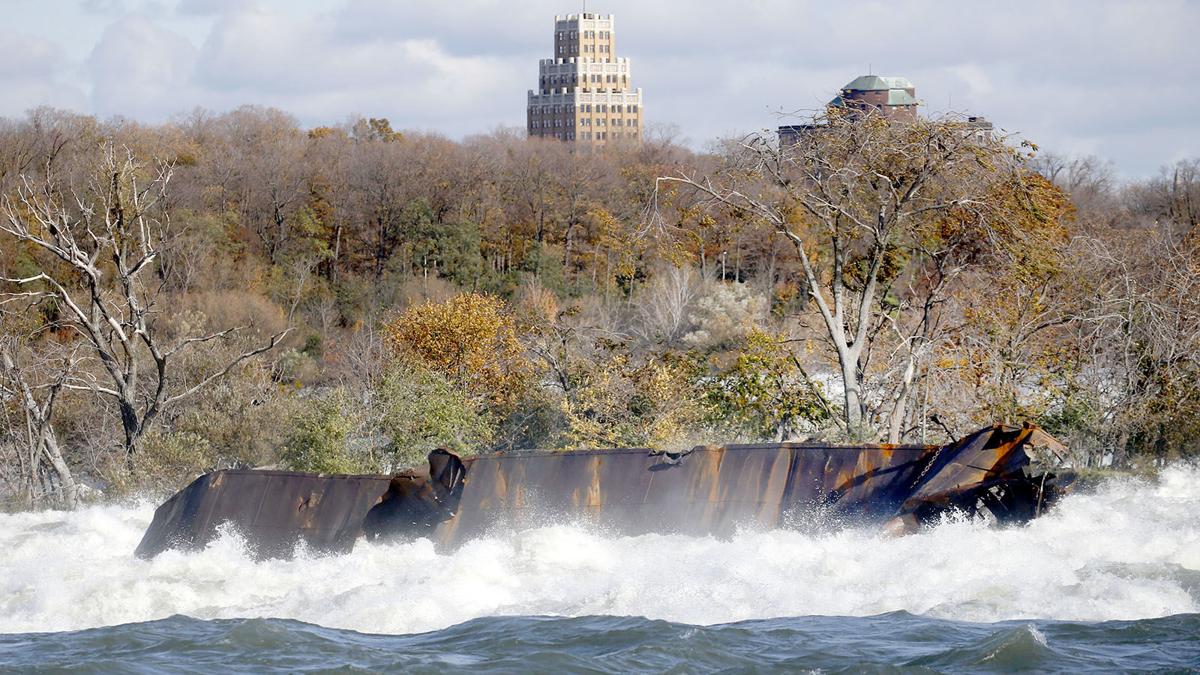 The recently disturbed iron scow that's caught in the rapids near the brink of the Canadian falls was moved by the recent strong winds on Halloween. (Robert Kirkham/Buffalo News) 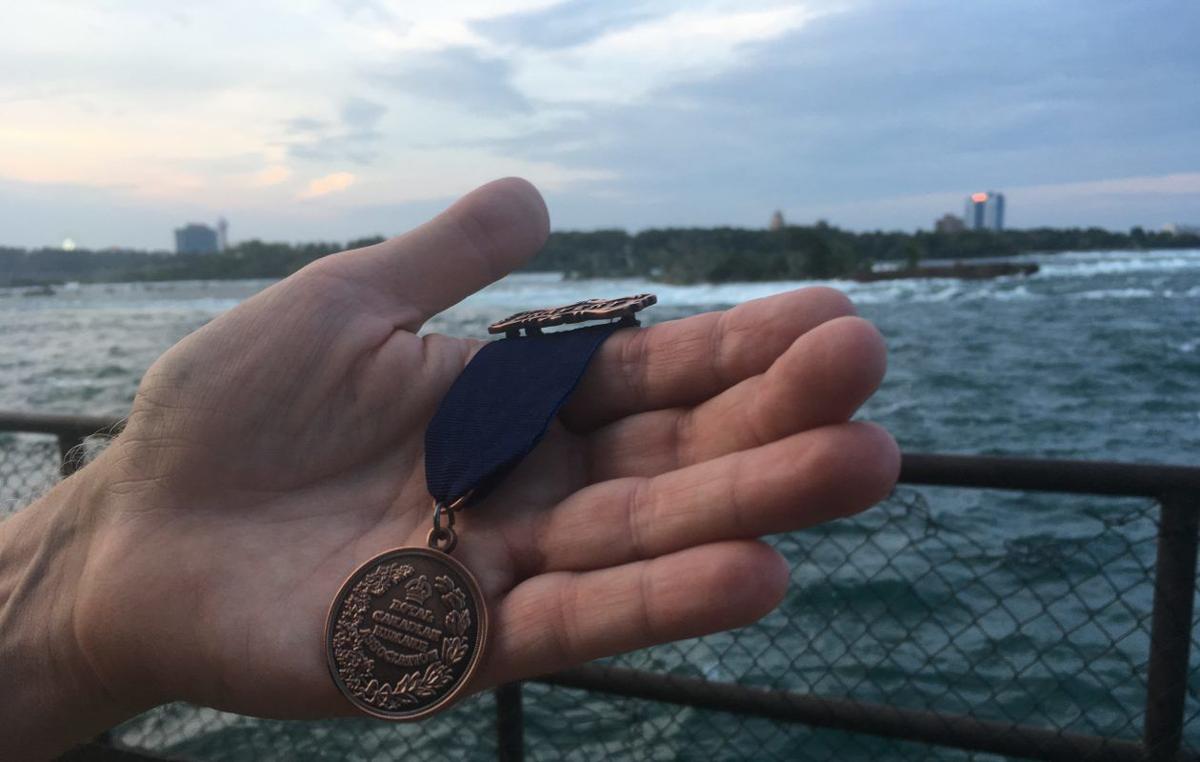 Dan Hill holds a medal for bravery awarded to his grandfather, Red Hill Sr., by the Royal Canadian Humane Association. In the background is a scow stranded near Niagara Falls for a century. Red Sr. played a key role in saving two men stranded on the vessel in 1918. (Sean Kirst/Buffalo News) 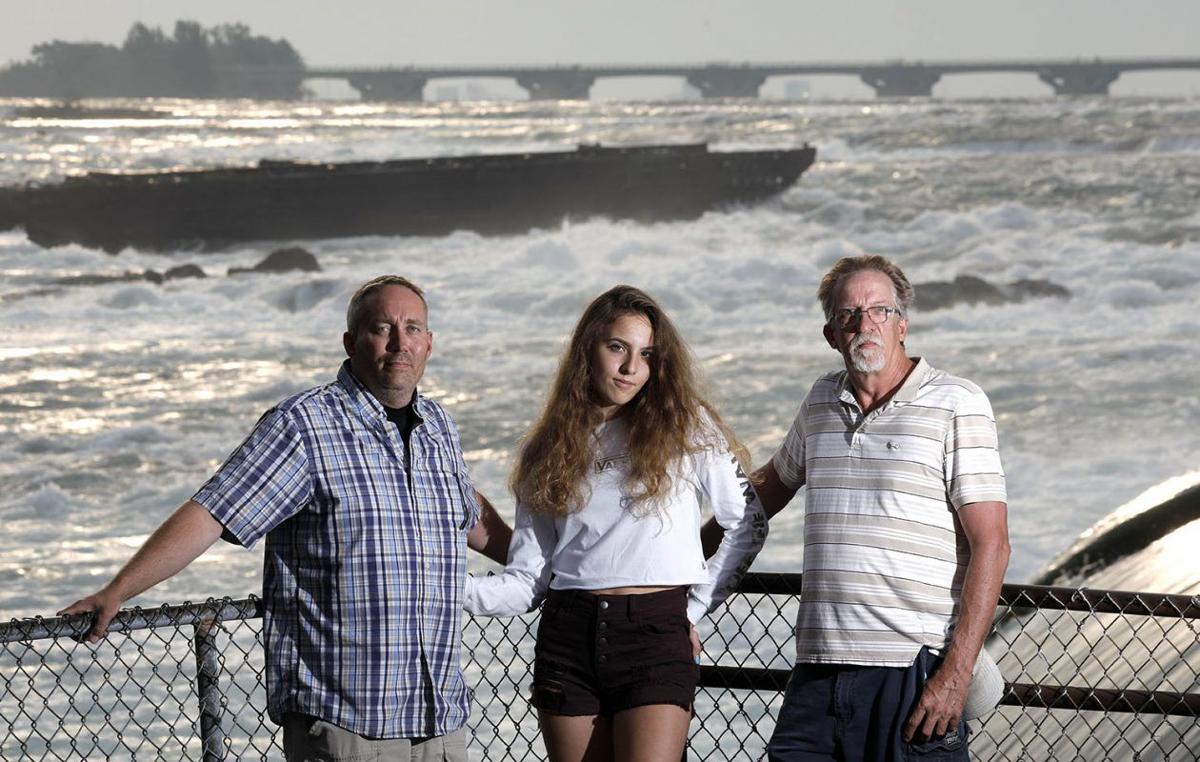 With the scow that ran aground 100 years ago behind them, descendants of Red Hill Sr. gather in Niagara Falls, Ont.: From left, Kip Finn, a great-grandson; Danni Hill, a great-granddaughter; and her father, Dan Hill, a grandson. (Derek Gee/Buffalo News)

Debbi Hogan, still contemplating the fury of a storm from the night before, had just gotten to work early Friday in Niagara Falls, Ont., when a co-worker came through the door of their Niagara Parks Commission building.

“I think the scow moved,” she said, words to trigger instant wonder in that city.

By 8 a.m., Hogan and a friend and colleague, Carol McVey, had made their way to a viewing area along the Niagara River behind the old Toronto Generating Power Station, and they soon posted some of the earliest photographs to a Facebook page called "Niagara History and Trivia" of an event now attracting international attention.

On Halloween night and the morning after, fierce wind and rain helped dislodge the rusting iron scow, which has served for more than a century as a kind of ultimate monument to both the fury of Niagara and the courage of rescuers willing take it on.

“Stunning,” said Michael Clarkson, an author and historian whose book, "The Age of Daredevils," delves extensively into the lore of the falls and William "Red" Hill Sr., the legendary riverman credited with saving 28 lives and recovering almost 180 bodies from the river.

To Clarkson, few rescues in the annals of Niagara rival this account. On Aug. 6, 1918, the scow broke loose from a tugboat amid a dredging operation on the American side, and the craft was swept off by the current. Two workers still on board, Gustave Lofberg and a man who identified himself as James Harris, seemed on their way to being hurled over the brink.

They managed to open what the old Niagara Falls Gazette described as "airtight compartments" on the bottom of the scow, causing it to run aground on a ledge maybe 800 yards from the falls.

While terrified onlookers braced for the craft to break loose at any moment, it never did. The two men were rescued only because Red Sr. risked his life by going out above the river to untangle guy lines shot to the scow by a Coast Guard cannon. After a harrowing night on the deck, Lofberg and Harris made it to safety by using a breeches buoy.

No one expected the scow to stay in place, but it remained in essentially the same spot for more than a century, a haunting memorial both to Red Sr.'s daring and to the terrors of the river.

Last week, for the first time since the two frightened workers dropped the hatches, the scow broke free and twisted toward the falls before settling in again.

The ‘iron scow’: Why an old boat stuck above Niagara Falls dislodged Friday

Hogan, a native of South Buffalo who now lives in Canada, recalled a childhood in which her grandparents would often take her to Niagara, where her grandfather shared a fascination with the scow. They would stand on the shoreline and study it, wondering if somehow it had moved, even a little bit.

It finally happened on a Halloween night more than 101 years after the rescue, leaving Hogan to express the feelings of many along the river at seeing the scow finally disturbed.

“We were totally in awe," she said, expressing sadness at how it now seems to be "pretty mangled."

James Hill, senior manager of heritage for the Niagara Parks Commission – and no relation to Red Sr. or his descendants – said the immediate reaction for parks officials is simply to do some watchful waiting. Historians have predicted for years that the scow, under relentless battering from the river, would eventually fall apart. The probability, Hill said, is that any heavy chunks of metal will simply drop to the bottom, in the upper rapids.

Even if pieces did go over the falls, Hill - who has been fielding such media calls as an inquiry from the BBC - said the metal fragments would almost certainly plummet into the deep waters at the base of the falls and disappear.

To the family of Red Hill Sr., that potential absence only speaks to an elevated sense of urgency.

"Once the scow is gone," said Kip Finn, a great-grandson, "you worry the stories about Red Hill will be gone, too."

Clarkson said the family has hoped for almost 80 years for a riverfront memorial to Red Sr., a dream expressed by his widow Beatrice after her husband's death in 1942. Indeed, Finn said part of the reason that his grandfather, Red Hill Jr., died in an attempt to ride a barrel over the falls was to raise awareness and money for a monument for his father.

More than a year ago, during a remembrance of the 100th anniversary of the rescue, the parks commission briefly illuminated the scow and promised a new plaque would soon honor the heroism of Red Sr., conspicuously missing from an earlier monument – an omission the family believes was due to longtime bureaucratic resistance at celebrating a charismatic daredevil.

While the new plaque has yet to go up, Jim Hill said the original design is being reworked – and will definitely highlight Red Sr.'s heroism.

"When you think of it, there were 100 men on the (power company) roof, firefighters, soldiers, police, the Coast Guard, and this is the guy who went out and did it," he said of the rescue.

For all those reasons, to Finn and Dan Hill, one of Red Sr.’s grandsons, the threat to the scow represents even more than a striking and emotional change to an iconic landscape.

In a way, it threatens memory itself.

“If it disappears, it’d be sad,” Dan said of the scow. Over the years, he helped in family recoveries of many drowning victims, and he said the scow represents a lasting monument to his grandfather's bravery. If Dan had his way, the parks commission would illuminate it every night until it breaks apart, using a 24-hour camera to capture what might be the final months of one of the great symbols of Niagara.

As for Finn, he started a petition a few weeks ago urging support for a riverfront statue of Red Hill Sr. The family’s daredevil history, he said, deeply affected his own life: After his grandfather’s death in 1951 at the falls, his grandmother – fearing the family call of the river – chose to separate herself from the Hills, and only in recent years did Kip and his brother Kelly reestablish closer ties with their relatives.

It was the scow, Finn said, that “brought everything together.” What Red Sr. accomplished involved utter selflessness, and the anniversary ceremonies helped reunite the family around that legacy.

Finn sees this storm as a warning, a kind of signal from the scow itself. “It rolled over in the night,” Finn said, “and it’s amazing that it didn’t just snap.” For now, in twisted and fragile form, it continues to offer a compelling statement on lives risked and finally rescued at Niagara.

Yet the scow is crumbling, and the Hills hope the tale itself – tougher than iron – will still endure next to the brink.

Rod Watson: Be thankful this generation didn’t have to do the really hard stuff

"It’s a good thing nobody was asked to wear masks during World War II, or history might have turned out differently," Watson says.

Throughout Western New York, the pandemic only intensifies the crisis for those who have the least. But St. Luke's Mission of Mercy remains a beacon in the community for those in need.

"Kelley, at 64, is having something of a terrific second life on television after practically ruling prime time for over a decade," writes Jeff Simon.

Cheektowaga, especially, has always represented a place where Republicans can win – even though the town is heavily Democratic, blue collar, ethnic and Catholic, writes Robert J. McCarthy.

Jeff Miers: Stuck at home for the holidays, but feeling grateful

This time of year finds us thinking about family. I’m aware that, without mine, I’d be pretty much toast, writes Jeff Miers.

Don Paul: After patchy rainfall and temps in 50s on Thanksgiving, a windy weekend

While actual Thanksgiving temperatures will move above the average of 44 into the low 50s, a brisk southwest breeze will keep a bit of a chill in the air.

Don Paul: A cool, but not truly cold Thanksgiving week in the works

Thanksgiving Day will bring our region early showers diminishing in coverage, with a somewhat drier and mostly cloudy afternoon.

The recently disturbed iron scow that's caught in the rapids near the brink of the Canadian falls was moved by the recent strong winds on Halloween. (Robert Kirkham/Buffalo News)

Dan Hill holds a medal for bravery awarded to his grandfather, Red Hill Sr., by the Royal Canadian Humane Association. In the background is a scow stranded near Niagara Falls for a century. Red Sr. played a key role in saving two men stranded on the vessel in 1918. (Sean Kirst/Buffalo News)

With the scow that ran aground 100 years ago behind them, descendants of Red Hill Sr. gather in Niagara Falls, Ont.: From left, Kip Finn, a great-grandson; Danni Hill, a great-granddaughter; and her father, Dan Hill, a grandson. (Derek Gee/Buffalo News)