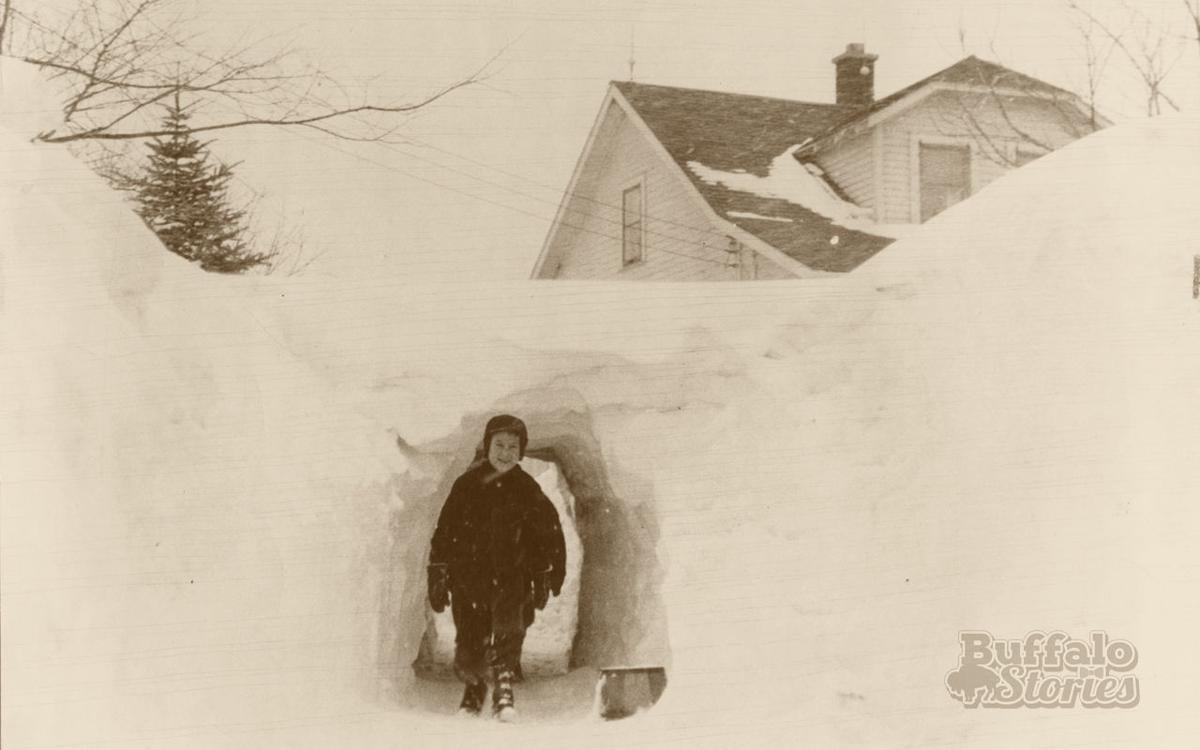 Having school closed as the result of too much snow seemed to happen less frequently in times past, like when this photo was taken in Orchard Park in 1947. 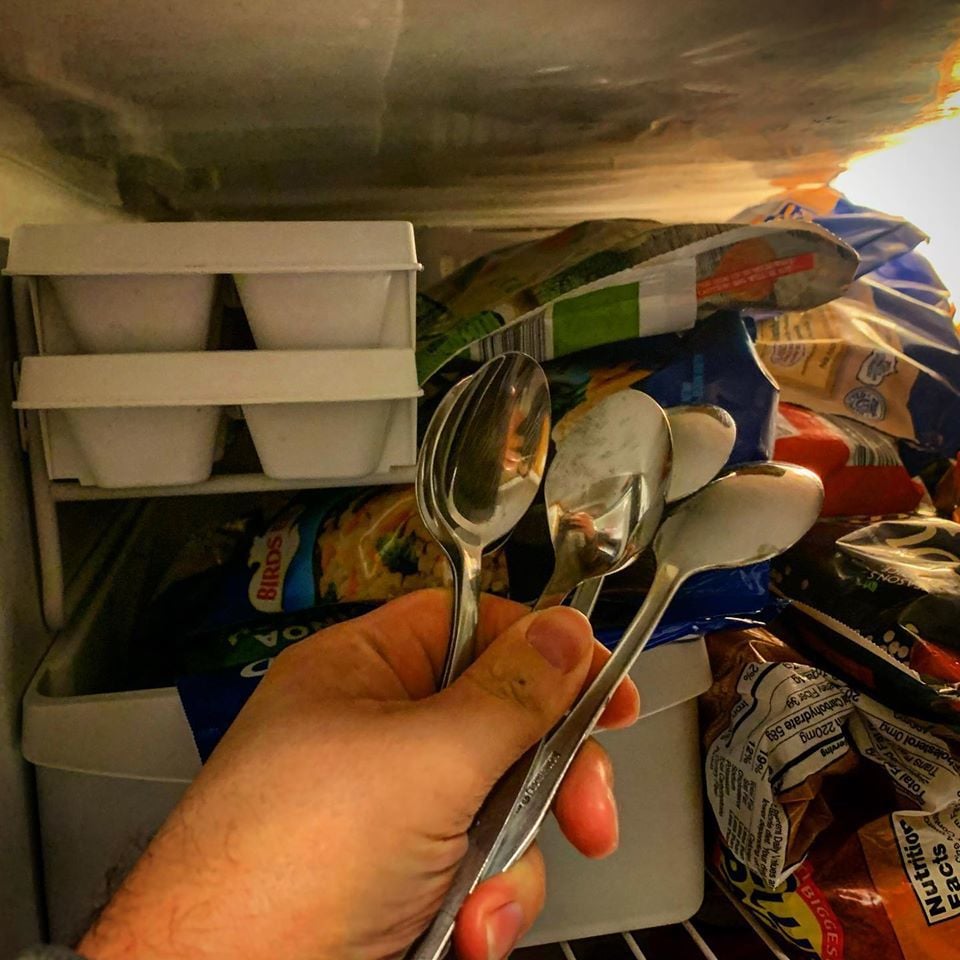 Putting spoons in the freezer on the evening of Thursday, Feb. 6, 2020 resulted in a day off from school the next day.

My fading memories of waiting for snow storms as a kid growing up in South Buffalo and then Orchard Park in the '80s seem pretty straightforward and unforgiving.

It would start with watching the 6 o’clock weather with Barry Lillis, Don Paul or Commander Tom Jolls — my dad was a committed channel changer. A faint gleam of excitement would seep into my heart with the mention of the words “snow” and “feet” in the same forecast.

I had heard rumors that when the snow got deep enough, that we’d actually get a day off from school. Snow measured in feet seemed like that might be the kind of totals we needed — but every time, it seemed, there I was walking to school around the corner. Snoopy book bag in mittened hand with white, blue, and red Tops bread bags sticking out of the tops of my moon boots, I climbed Kilimanjaro-like snow piles along Tifft Street on my way to line up in front of Holy Family in the freezing cold, waiting for school to begin.

Later after we’d moved to Orchard Park-- where I believe snow was invented-- it didn’t get any better. On the days when the windows of my basement bedroom were completely covered in snow, I’d flip the radio on early to hear the school closing list.

By my middle and high school years, I’d learned from my ol’ man about flipping stations. But whether it was Danny Neaverth on KB or Bill Lacy on WBEN, it was once again the same story  every time.

At the beginning of the alphabetized list of closings and cancellations, there was a barely perceptible knot of hope at the back of my throat. By the time “Akron Central, closed” became “North Collins Central, closed,” the knot had become a lump with a pounding heartbeat all its own.

There must have been a snow day mixed in at some point, but no one in my graduating class remembers it. That’s probably why today’s kids take snow days into their own hands.

Anyone around young people these days knows that there’s quite a routine to help along both snow gods and superintendents in their part of one of the great joys of childhood: the snow day.

The handful of folk traditions seems to have evolved and gained wider audiences over the last 25 years.

Searching more than a half-billion newspaper pages from all over the country, the first reference to any superstition regarding kids trying to bring on a snow day came from a New Jersey paper in 1994.

The Asbury Park Press referred to the “odd tradition” of wearing pajamas inside out at Swimming River School in Tinton Falls, N.J. By the time that story was written, the practice was already well-established there, meaning the tradition dated back to at least the 1980s.

Another story appeared in USA Today and in papers all over the country in 1995, describing the way that kids in Maryland and Virginia turned their pajamas inside out to help bring on the snow.

A few weeks later, Erma Bombeck referenced that article in her column, which appeared in 900 papers around North America, and more people were reading about ways to make it snow. By 2005, one columnist in Michigan wrote that the superstition was spreading across the country like wildfire.

Snowing or not, turning clothing inside out for good luck has been around for a long time. Think of baseball rally caps. There were references to “inside-out bed clothes for good luck the next day” dating back to the 1930s. In one article written by a teenage girl, she wore her pajamas inside-out hoping for a date to a dance.

The beginnings of other rituals are more mysterious, but they do begin to appear more and more in print in the late '90s and early 2000s.

In 2008, a Missouri first-grader listening to the radio heard about putting a spoon under your pillow to bring on the snow. He told a bunch of classmates, who used spoons and pajamas to evoke the snow, and there was no school the next day.  There are also references to spoons in the freezer or white crayons in the freezer. White crayons have also been placed on bedroom window sills to urge along Mother Nature’s predilection for the white stuff.

Perhaps the most bizarre of the rituals first appears in print around 2006, when an Associated Press article printed in hundreds of papers around the country tells the story of two Virginia sisters who flush ice cubes down the toilet — along with pajamas and spoons — to make sure that the next day is a snow day.

When asked how that would work, one little girl hypothesized that if enough kids flushed enough ice cubes, they would go into the ocean, make the water cold, and make the snow fall. That ties it in to a superstition that dates back to ice fishermen on the Great Lakes, who’d throw ice cubes into the water to help it along in the freezing process.

Over the last decade, these superstitions have moved into the mainstream, being featured in places like Reader's Digest and the Today Show.

Which brings us to today. Many of my fellow children of the '70s and '80s chided me when I put a photo of me leaving spoons in the freezer Thursday night, in hopes that the school where I’m a teacher and administrator would be closed. They hadn’t heard of these newfangled ways to elicit canceled classes.

“I don’t get it, Steve,” commented one of my fellow Gen Xers, but this tradition — which spread during the millennial years and is still going strong today — truly appears to work. After putting spoons in my freezer Thursday night, on Friday, I found myself sitting at my dining room table researching and writing this story — instead of teaching.

One more change the pandemic may bring: the end of school snow days

Now that teachers and students have become adept at learning remotely from home, it may not be necessary to cancel learning when the weather is bad.

Having school closed as the result of too much snow seemed to happen less frequently in times past, like when this photo was taken in Orchard Park in 1947.

Putting spoons in the freezer on the evening of Thursday, Feb. 6, 2020 resulted in a day off from school the next day.