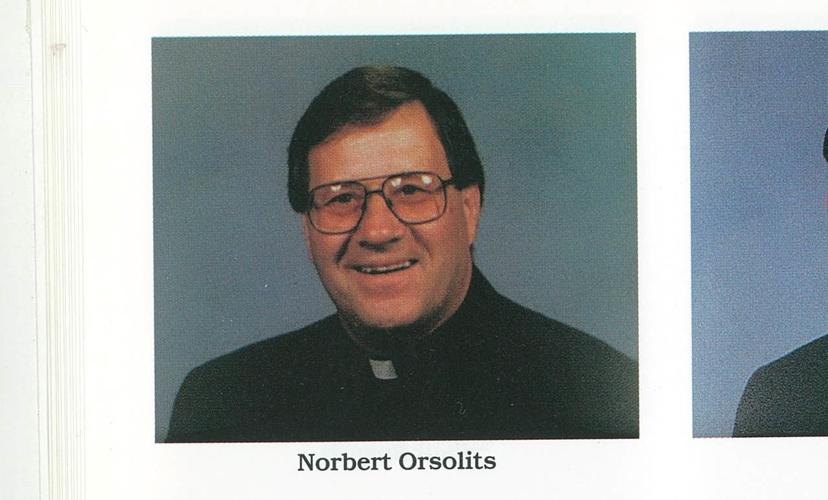 Then-Rev. Norbert Orsolits: His admission to abusing "dozens" of boys triggered a monumental shakeup in the Diocese of Buffalo. (File art) 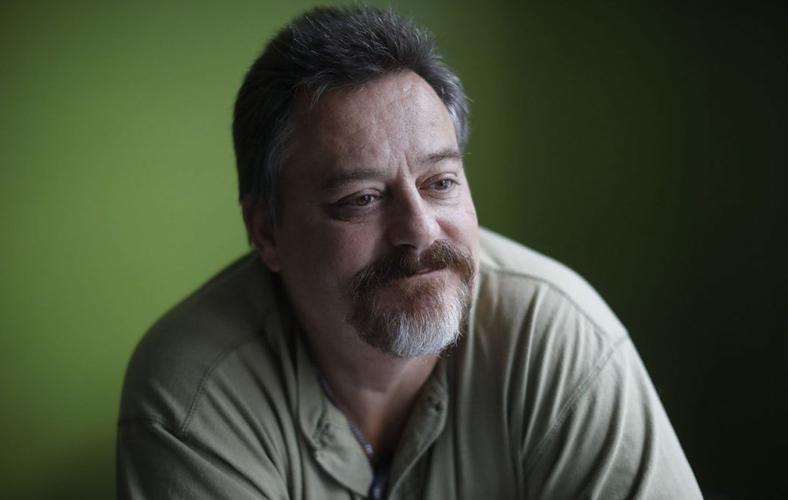 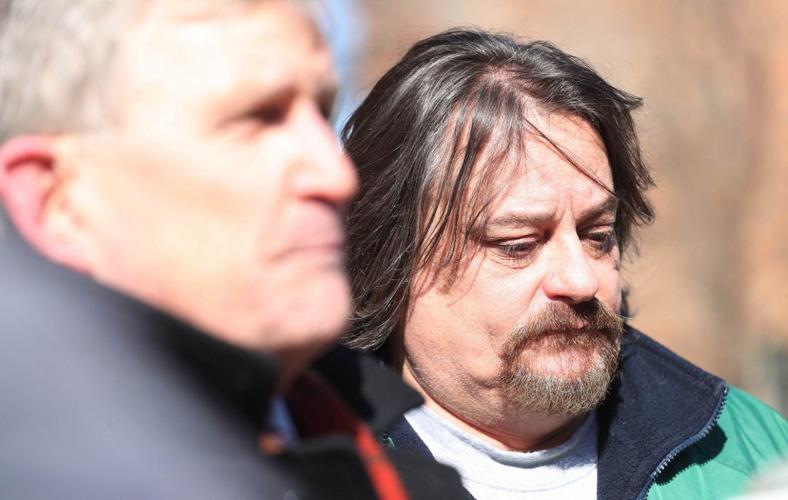 Michael F. Whalen Jr. at the moment in February 2018 when he accused Norbert Orsolits, a now-retired priest, of sexually abusing him nearly 40 years ago. Robert M. Hoatson, who runs a nonprofit that supports abuse victims, is pictured at left. It triggered a chain of events that led Tuesday to the retirement of Bishop Richard Malone. (Sharon Cantillon/Buffalo News)

Michael Whalen was getting ready to go to a Buffalo Sabres game Monday when his phone started buzzing. A friend and ally, Siobhan O'Connor, told him of an impending shakeup in the Diocese of Buffalo unlike anything this community had seen before.

After more than a year of rejecting calls for his resignation, Bishop Richard Malone would take early retirement, a decision confirmed Wednesday by the Vatican.

For a moment, Whalen, 54, felt the whole thing wash across him. His account of childhood abuse by a priest, finally spoken out loud not quite two years ago, touched off shock waves still buffeting the diocese.

He describes himself as an everyday guy from South Buffalo, with all of this happening at a moment when Whalen and his wife, Maria, feel particularly grateful. While Whalen does not attend Mass, he still considers himself Catholic, and he said his blessing for this Advent season is a new granddaughter, Jasmine. Born seven weeks early at 3.6 pounds, she is now a smiling infant of more than twice that weight.

Lori, the baby's mother, lives with her parents, and Whalen looks forward to his grandchild's awe once they put up their Christmas tree.

Yet what he spoke of this week in a midnight conversation – even now, he struggles to sleep – is how Malone's departure is tied to an astounding chain of events, and how a change in any of them might have kept Whalen 18 months ago from a Main Street corner, near the diocesan offices.

Whalen stood at that time alongside Robert Hoatson, a former priest who advocates for abuse survivors, and described being molested at "13 or 14-years-old" by then-Rev. Norbert Orsolits, in a rural cottage.

It easily could have ended there. Typically, the diocese would do exactly what it did, which was to say any allegation “is addressed pursuant to a protocol that is designed both to protect children and to respond to victims."

Those claims would then disappear beneath a bureaucratic veil. All of it could have faded away, except for one thing.

Orsolits admitted his crimes, on a vast scale.

Buffalo News reporter Jay Tokasz drove to the cottage Whalen described, near the old Bluemont Ski Area in Yorkshire. At the door, Orsolits said he did not remember Whalen specifically, but said he abused “probably dozens” of boys, maintaining some children brought it upon themselves.

The result was "a nuclear bomb" within the diocese, in the words of Steve Boyd, Whalen's Buffalo lawyer. Orsolits had confirmed the worst suspicions, the idea that a predatory priest for many years could cause serial harm to many children, which led to the most volatile question:

For generations of Western New Yorkers, how widespread had these crimes been?

The answer is still unwinding. Malone, amid civic fury over the revelations, reversed diocesan policy and released the names of 42 living or dead priests credibly linked to abuse. That number has now grown beyond 100, and the absence of so many from the original list led to a contention by many Catholics that church leaders were still hedging on the whole truth.

More than 210 survivors, including Whalen, have filed lawsuits against the diocese that accuse 107 Catholic priests of abuse under the new statewide Child Victims Act – actions that show a lack of faith in diocesan efforts to offer payments for a limited pool of survivors through a "reconciliation and compensation" panel.

Whalen, recalling how sunlight finally started pouring in, speaks of an act of God.

“Look where we’re at,” he said, describing his faith. “Look at what He gave me to run with.”

Five years ago, in pain and living on disability, Whalen said he was so overwhelmed by depression that he stopped at Catholic Charities on Cazenovia Street, seeking counseling help. That was a pivotal moment, Whalen said: He was paired with an empathetic social worker who helped him confront years of trauma.

He told her about losing his dad, when he was 6. He talked about being assaulted in his van as a young man in Texas, just after he left the Army, by robbers who smashed him in the head with a hammer and left him there, unconscious.

Beyond all else, he revealed the sickening interaction with Orsolits, how the priest brought him to the cottage as part of what Whalen's mother believed was a skiing trip, how Orsolits gave him alcohol and marijuana, then abused him – and how Orsolits then treated Whalen with contempt and anger at St. John Vianney School in Orchard Park.

Through that counseling, Whalen decided to return some collection money he stole after a childhood friend took it from that church, a theft that had always haunted him. In dropping off the money, Whalen saw a priest and told him what happened with Orsolits. The priest said he was mandated to report abuse to the diocese, which Whalen said led to a call from Malone, and an offer of counseling.

What the diocese never offered was a financial settlement, Whalen said, or any sense of a larger reckoning.

Not long afterward, through sheer chance, Whalen happened upon a Facebook ad for Mitchell Garabedian, the Boston lawyer who achieved fame years ago through the “Spotlight” cases.

Whalen made the call. It was Garabedian who asked Whalen if he had the strength to tell his story publicly, a decision Garabedian described Tuesday as having “historical impact.” Whalen, who says his counseling prepared him for the moment, acted from "decency and courage,” Garabedian said, a choice that will aid in healing more survivors than Whalen will ever know.

Shortly after Whalen went to the Main Street corner, an upset O'Connor – a former executive assistant to Malone – leaked diocesan documents about the crisis to WKBW reporter Charlie Specht, a decision she said was "kindled" by Whalen's bravery, and a step that accelerated calls for a resignation.

Today, as the Vatican confirms Malone's retirement, Whalen said he bears the bishop no ill will. Malone, he said, simply “went by the playbook,” which is not close to enough. To Whalen, what matters is whether a new bishop "cleans house," whether he can separate himself from anyone with direct ties to the era when abusive priests too often moved from parish to parish.

What must happen is a cleansing, Whalen said, a documentary confession of this reality: Administrators linked to the long era of abuse turned their backs on the essence of their faith. They chose instead to look away from heinous crimes against children, thus allowing wounds that will affect generations.

Until all those files are shared in an open way, Whalen said he remains skeptical about whether the leadership has the humility to take those steps. He said it all hinges on compassion, which is why he remains willing to meet with Orsolits, now 79, to offer forgiveness if the former priest asks for it.

Regardless of how the church responds, Whalen said he and some friends who went through the same thing have started the Buffalo Survivors Group, whose regular meetings are intended to offer comfort and a voice to those who endured abuse.

This week, in the midnight conversation, he reflected on what he sees as a quiet miracle: His tale could easily have disappeared, like so many others, if four or five key moments go differently.

Credit the whole chain to chance if you like, but this is Advent in the church, and Whalen prefers this answer.

Even now, after everything, he calls it being Catholic.

Sean Kirst: From Watervliet, a passionate bid to lift Butch Byrd onto Bills Wall of Fame

It was supposed to be a chance, finally, for Bob Christiansen to shake Butch Byrd’s hand. They had not seen each other since childhood, when B…

Why are reports of anxiety, especially among young people, spiking? | The Ethical Life podcast

🎧 The hosts discuss what's responsible for the rise in cases and what can be done to reverse this troubling trend.

Froma Harrop: Where are dads when single moms are struggling?

We regularly encounter stories of Americans struggling to stay financially afloat, buffeted by the day's economic challenges. So many focus on a woman who is identified a quarter of the way in as a "single mother." She's often portrayed facing impossible demands of holding a paying job while caring for the young ones.

When Gov. Ron DeSantis referred to a “biblical storm surge,” he was assessing Hurricane Ian’s damage and, unknowingly, prophesying what’s to come in future years and decades in Florida.

Richard Kyte: With anxiety levels spiking, it's time to look at the cause

Ranked choice voting has been in vogue across the nation, with many cities and some states changing their elections to incorporate it.

LZ Granderson: The accusations against Brett Favre are not just another NFL scandal

Nearly every member of my family has ties to Mississippi. During school breaks, we would load up the Aerostar and head out from Detroit, down I-75 south to our grandparents' home in Cruger, a small town nestled somewhere between where Emmett Till's body was found and where Medgar Evers was assassinated.

Walter Olson: Ranked choice voting is a good idea that deserves a tryout

Something noticeably different this year at Nolan Catholic High School in Fort Worth, Texas.

Through its heinous human rights record,

theocracy has defiled religion it's based on

Then-Rev. Norbert Orsolits: His admission to abusing "dozens" of boys triggered a monumental shakeup in the Diocese of Buffalo. (File art)

Michael F. Whalen Jr. at the moment in February 2018 when he accused Norbert Orsolits, a now-retired priest, of sexually abusing him nearly 40 years ago. Robert M. Hoatson, who runs a nonprofit that supports abuse victims, is pictured at left. It triggered a chain of events that led Tuesday to the retirement of Bishop Richard Malone. (Sharon Cantillon/Buffalo News)