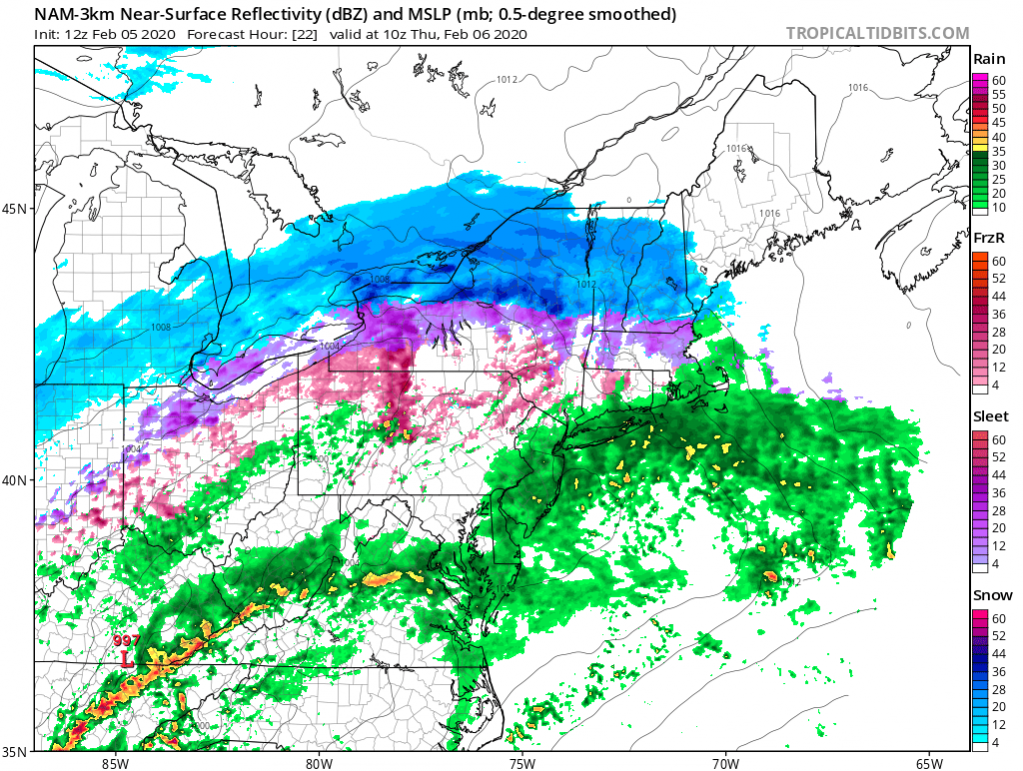 As advertised at the beginning of the week, a slow-moving frontal boundary to our south will separate modified arctic air over our region from very moist, mild air to our south. The front will provide a pathway for a couple of strengthening waves of low pressure advancing first toward the interior of the middle Atlantic states and, later, to the Atlantic seaboard.

The first wave of precipitation will arrive as snow, moving into Western New York from southwest to northeast during the mid- to late Wednesday evening hours, as depicted in this high resolution model for around the midnight hour overnight.

The patches of dark blue are modeled brief heavier bursts of snow. The magenta shades to the south indicate the arrival of warmer air aloft, making the subfreezing air too shallow to support snow, and a change to sleet/ice pellets and glaze-producing freezing rain in the Southern Tier. This transition occurs in above-freezing air aloft, where precipitation falls as rain and then refreezes in the increasingly shallow subfreezing air near the surface. If that air is just thick enough, the rain changes to ice pellets, but if the air is subfreezing only right near the ground, the rain freezes on contact as the most slippery element: freezing rain.

Fortunately, the duration and amounts of freezing rain won’t be sufficient for a genuine ice storm, but there will be more than enough for slippery roads and sidewalks. The subfreezing air will remain deep enough for snow to fall longer on the Niagara Frontier to the north before the changeover begins.

Assuming this high-res model is spot-on, by 5 a.m. Thursday the changeover will have reached the metro area. The next assumption commuters have to hope for is the salters have been out there doing their good work.

Reflective of the deeper cold air staying longer to the north, the modeled overnight pre-ice snow totals are moderate closer to Lake Ontario and lighter from the metro area southward.

Regardless, guidance indicates surface temperatures will still be below freezing during the commute, meaning untreated surfaces will either be slick from slushy snow and sleet or very slick from freezing rain. As the day progresses, available moisture diminishes and patches of lighter mixed precipitation will become sparser in coverage. There may be a change to patches of just rain, mainly near Lake Erie. The commute home Thursday looks less challenging than the morning commute, with lighter amounts and temps closer to or just above the freezing mark.

As Thursday evening progresses, colder air will re-infiltrate our region on a northeast flow, behind the low pressure area moving closer to the coast. This will change any mix back to all snow and drop readings into the upper and mid-20s. There will be two surges of moisture behind the eastern low for us to deal with. One arrives Thursday night, and the next arrives Friday. It appears the low center will be too far east for us to receive its heaviest snowfall, which is more likely over central New York and over northern New England, southeast Ontario and parts of Quebec.

Here is how the Tuesday night European/ECMWF model depicts the storm on a larger scale during Friday, as a potent low pressure system.

The 12 hours newer (time difference, model run times in England vs. in the United States) American GFS is in pretty good agreement with the ECMWF on storm position and strength/depth, so that’s helpful.

When all is said and done, total snowfall by late Friday will be enough to slow traffic and be more than a minor nuisance, but not enough to be a truly disruptive storm. Some snow will linger into early Friday evening and then diminish.

Modeled storm totals by late Friday are again in good agreement. The preliminary amounts on the Niagara Frontier may end up in the 5- to 8-inch range when the models are blended and I throw in some pattern recognition stored in my experience. As for model amounts, here is the GFS.

Amounts will be somewhat heavier in the Genesee Valley, closer to the storm center. The ECMWF has similar ideas for the totals, but put aside the decimal points and tenths-of-inch breakdowns — that’s what the models do, not working meteorologists.

These are model total accumulations from Wednesday night through Friday, and they don’t account for the melting likely to occur Thursday. That’s why I lean toward somewhat lower amounts on the ground by late Friday than in the model output.

Beyond slowed Friday travel, things appear to be looking up for skiers and the resorts this weekend. Saturday will be the colder of the two days, with high temps in the 20s, and back to above freezing on Sunday. I will update this forecast as necessary in the comments section beneath the article.

Richard Kyte: Why gun owners need a change of heart

Opinion: Why can’t those who own guns and know the most about them take responsibility for ensuring they're used safely and without malicious intent?

After six sisters at Villa Maria died from complications linked to Covid-19 last year, 55 members of the Felician sisters got their second doses of the vaccine this week.

The Ethical Life podcast: Should gun owners take the lead on firearm safety?

Episode 11: Scott Rada and Richard Kyte talk about how their different life experiences frame how they each look at firearm safety. Later, they discuss a recent poll that shows most Americans no longer belong to a church.