In Baltimore, vandals attacked a statue of Christopher Columbus and tossed it into the harbor.

In Washington, protesters stormed the likeness of President Andrew Jackson. And in Richmond, they toppled a monument to Confederate President Jefferson Davis.

Now the assault on memorials to the nation's historical figures has hit Buffalo with weekend vandalism of the Niagara Square landmark commemorating President William McKinley. Police say the 96-foot-tall obelisk dedicated to the 25th president, assassinated in Buffalo in 1901, was extensively defaced with paint and chalk sometime between Friday night and Saturday morning.

"There was a lot of graffiti, and there's a lot of work to be done," DeGeorge said.

Photos reveal painted-over faces on the lions resting at the foot of the obelisk, with the "Black Lives Matter" slogan and anti-police statements added. Several vulgarities are also visible.

"People protesting down there have generally kept out the troublemakers, but overnight somebody caused tens of thousands of dollars in damage," he said. "You can't claim that is protest."

Since demonstrations erupted across the nation following the May killing of George Floyd by Minneapolis police, calls have increased for the removal of statues and monuments to those perceived as champions of slavery or racism.

Rinaldo said monument defacing is not a persistent problem in Buffalo, though he noted the Columbus statue near the Peace Bridge is occasionally targeted, as well as the Martin Luther King Jr. bust in the Masten District park named for the civil rights leader.

But police have noted an uptick since the Floyd arrest sparked significant protests in Buffalo. City Hall has also been a target, he said.

Rinaldo said police have stepped up patrols near the monument, but they often are interrupted by emergency calls around the city.  Still, he said, investigators will now review footage from the many security cameras in the area and appeal to the public for any further information.

DeGeorge noted that many volunteers turned out following an earlier defacing of the monument to help with cleanup efforts. Members of the Mayor's Impact Team will be dispatched to help with graffiti removal.

The Editorial Board: Vandalizing of McKinley monument detracts from legitimate protests

The defacing of the William McKinley monument in Niagara Square over the weekend likely was more an act of mindless vandalism than a political statement, writes The News' Editorial Board.

It's at least the third time the 96-foot-tall monument to President William McKinley has been damaged since Black Lives Matter protests erupted in late May. 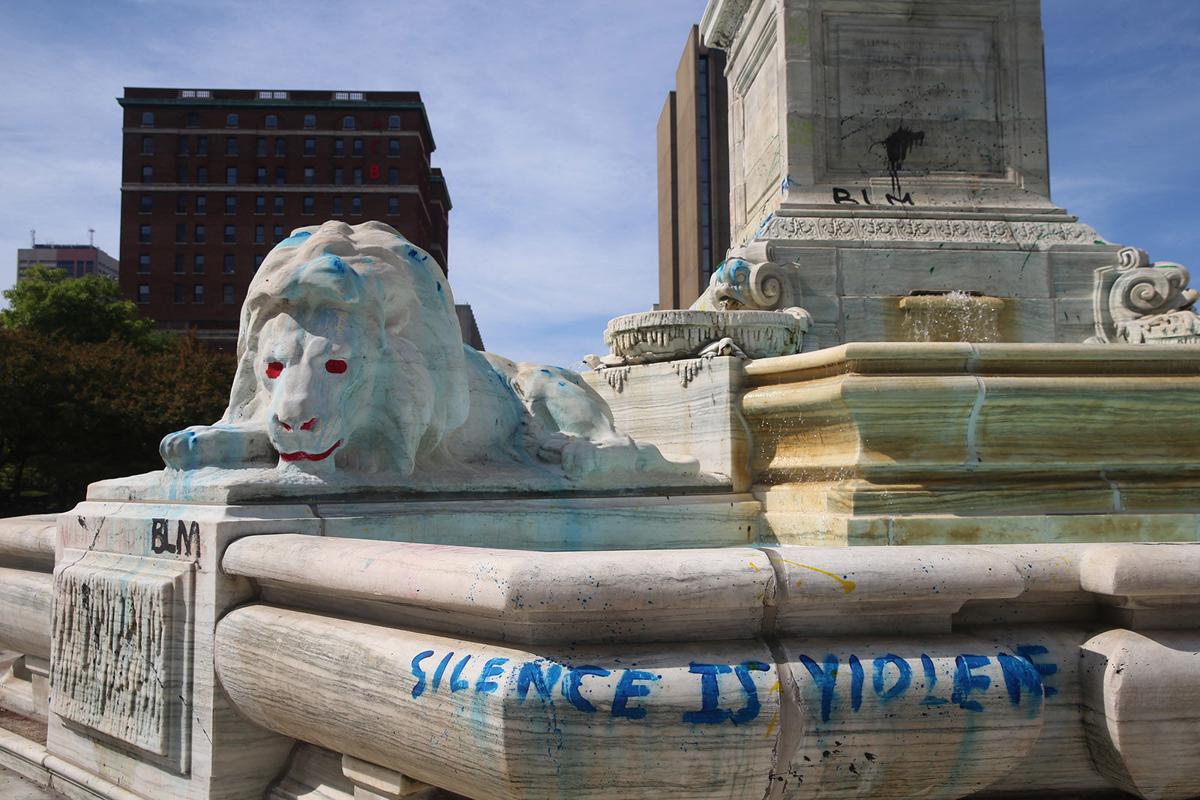 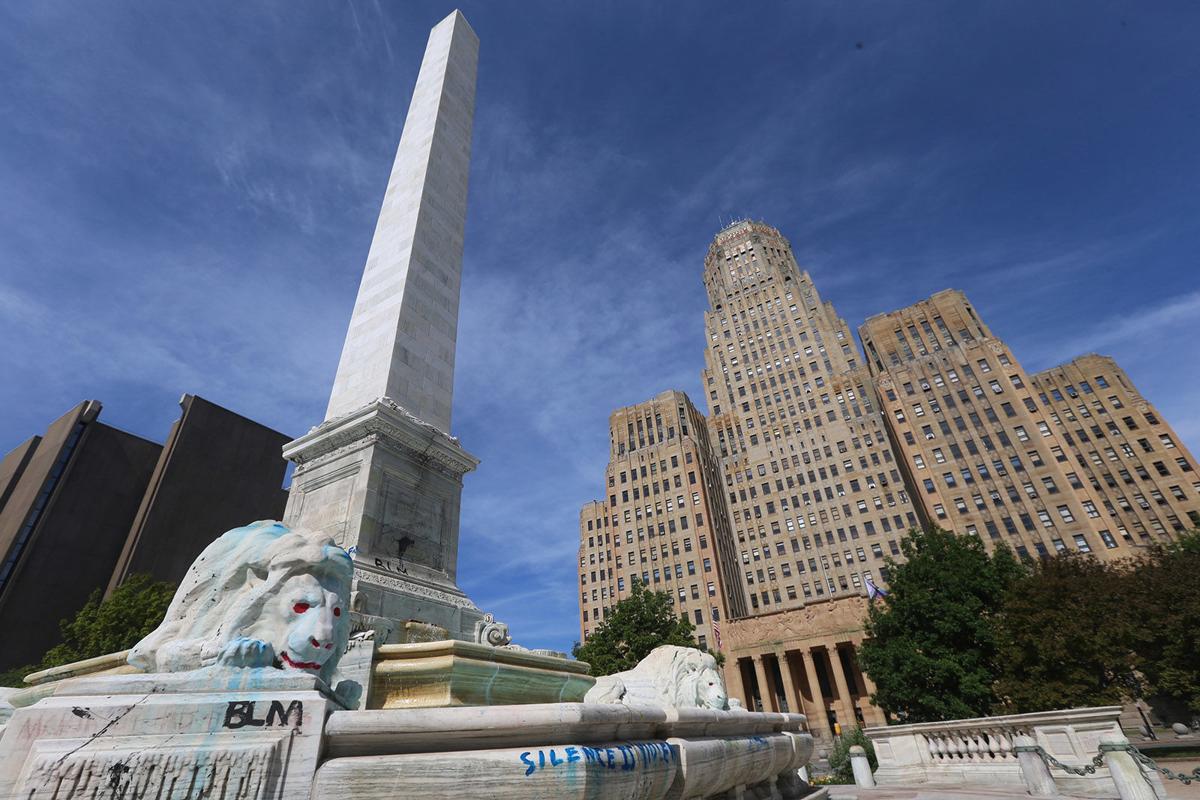 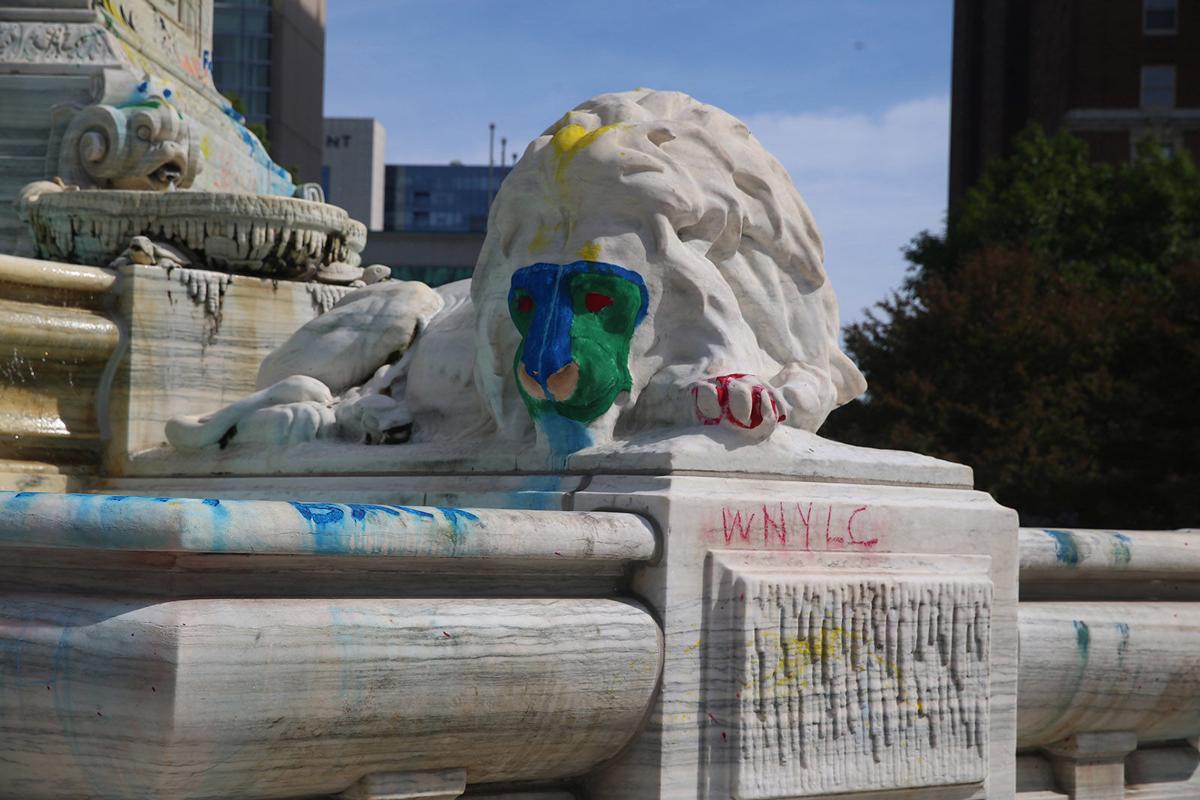 Graffiti on McKinley Monument base and Niagara Square.