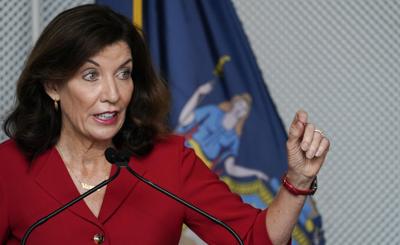 ALBANY – In the whirlwind that has been her life the past two months, Kathy Hochul, by political necessity, appears to have symbolically adopted a new home: New York City.

And now, with Attorney General Letitia James doing what Democratic leaders have been expecting her to do – challenge Hochul for the Democratic nomination in 2022 – the rush for the new governor to connect with New York City Democratic insiders and voters has been even more urgent.

"Good morning, Brownsville," Hochul said in a recent stop at a recreation center in Brooklyn.

“It is so great to be back in Harlem," she said a couple of days after taking office as she tapped a Manhattan senator, Brian Benjamin, as her new lieutenant governor.

Since taking office Aug. 24, 62% of all or part of her days as governor have been spent in New York City. Through Thursday, she has held 60 events in New York City that made it onto her public schedule, not counting the many undisclosed private meetings, dinners or fundraisers she has attended there.

A quarter of her days have been at the seat of state government in Albany. It appears, from her schedule, she has been in Erie County for all or parts of eight days through Friday.

For a Buffalo Democrat eyeing a gubernatorial campaign next year, and facing movement from at least three New York City Democrats about challenging her at the party’s nominating convention in February and perhaps the June Democratic Party primary, there is an important and obvious core reason:

New York City will deliver more than half the primary vote for governor in June.

Also, time is short for the Western New Yorker – who was never given a shining role in her previous job as Andrew Cuomo’s lieutenant governor – to build up her name recognition in the five boroughs that will have the biggest say in who Democrats select to be their candidate in the November 2022 general election.

“Gov. Hochul knows downstate voters will be a deciding power in 2022, with Brooklyn at the helm," Assemblywoman Rodneyse Bichotte Hermelyn, who is also the Brooklyn Democratic Party chairwoman, said last week.

On Wednesday, with word spreading that James is getting in the race, the Brooklyn lawmaker said in a statement: "New York State just welcomed its first female governor, Kathy Hochul, and now we have the prospect of welcoming the first Black woman governor in the nation, Letitia James."

Why does her county matter? Brooklyn, the largest borough, has 1.1 million actively registered Democrats, more than four times the number of Democrats in Erie County.

Hochul has toured post-hurricane flood-damaged neighborhoods in Queens and Staten Island, presided at the end of a day of trading on Wall Street, attended a Fashion Week event and rallied with abortion rights advocates in Manhattan. She has spoken to audiences at Broadway plays, and she has attended fundraisers for herself, and others, the past two months in New York City, including ones hosted by well-connected Albany lobbying firms.

It’s a beautiful day on the Upper West Side to get outside, visit small businesses, and hear directly from New Yorkers on how we can make government work better for them. Have a great Sunday! pic.twitter.com/FR5qOhw7n3

She even made time to go to a Buffalo Bills game watch party at a sports bar in the East Village of Manhattan. Like many of the stops not on her public schedule, Hochul sent out photos of the bar stop on her Twitter account.

Transforming to a governor candidate

Hochul was elected lieutenant governor twice in statewide elections and spent many days in New York City as Cuomo's lieutenant.

This is a far different time. Now, she’s on a mission to build up her name and standing with rank-and-file Democrats, and that means getting as much publicity in as many New York City-based news outlets as possible.

For most of her political career, Hochul has been a moderate. To win the primary in 2022, she has been shifting to the left on any number of social and fiscal matters. On Wednesday, for instance, she talked, without specifics, of the need to close more upstate prisons.

Monica Klein, a New York City-based Democratic consultant, said gubernatorial candidates who seek to use Cuomo as a foil in 2022 “will likely highlight their deep ties to the communities and neighborhoods of New York City that Cuomo neglected and underfunded.”

“Hochul understands that her likely opponents have the city ties that she sorely lacks – which means she’s already lagging behind with a key bloc of primary voters. And with every governor since 1920 hailing from downstate, she needs to camp out in the city if she wants to make headway," Klein said last week.

Bichotte Hermelyn, the Brooklyn lawmaker, said after citywide elections this year there is a “feeling of empowerment” among many residents, including working families and people of color who have “long been ignored by the people charged with representing their interests.”

State Sen. Michael Gianaris, a Queens Democrat and the Senate’s deputy majority leader, said Hochul was “very diligent” about visiting Queens’ neighborhoods hit by Hurricane Ida last month, and that it is clear she “recognizes the importance” of New York City during her short stint so far in charge of the state.

“The jury is still out in terms of the direction she wants to take the state. … What we don’t know yet is where she falls ideologically," he said.

That will be revealed when Hochul gives her first State of the State address in January followed soon after by the presentation of her 2022 budget plan – a document of crucial importance to New Yorkers, and to Hochul's political future.

Those two actions will largely answer whether Hochul keeps moving to the political left as a way to appease certain voting blocs in boroughs like Brooklyn and Queens.

Klein, the political consultant, said those events in January will be a key opportunity for Hochul to try to differentiate herself from Cuomo, who was not popular with the most liberal side of the party’s membership. If she doesn’t, a “challenging” primary season likely awaits.

As the governor in a state that gives strong powers to its governors, Hochul has been handed a rare gift that an upstate politician could only dream for a statewide run: near-daily attention in the nation’s biggest media market.

“The governor’s office provides Hochul with the bully pulpit and resources to build a statewide profile and stay in the public eye – but she’s also now responsible for the crises that Cuomo left behind," Klein said. If in June New Yorkers feel the state is heading in the wrong direction, “Hochul will have a hard time convincing voters it’s not her fault from the governor’s mansion."

A recent Siena College poll found that 47% of New York City voters had a favorable view of Hochul, with only 18% saying unfavorable. But 35% said they did not know enough about her, or had no opinion. The poll showed her leading all Democratic opponents; no one else has yet declared.

Hochul administration officials note that she has traveled to a number of upstate locations since becoming governor.

Officials say some of her trips to New York City were for unusual events, such as the recent hurricane, an Aug. 29 subway power disruption and Sept. 11 anniversary events. They did not publicly comment directly on her heavy New York City schedule, except to say that she works "collaboratively with partners across the state."

When the number of enrolled Democrats are factored into voting in the last three statewide primaries, 77% of all potential voters statewide are in that New York City media market. Just New York City: 54.7%. The Buffalo media market area by comparison: 6.5%, Skurnik said.

“She has to convince New York City voters it’s OK to vote for someone from Erie County," Skurnik said.

To get media coverage in New York City, Hochul pretty much has to be in the city, the consultant added. Hochul knows that she can hold an event in Manhattan and get coverage of that event at news outlets from Albany to Buffalo. But a Hochul event in Buffalo is not going to get New York City coverage unless she’s making some exceptional news, Skurnik said.

Skurnik believes the effort she is expending in New York City may be starting to work for her. Among people he knows in city political circles, many felt in August that she could simply not win the 2022 primary as a Western New Yorker.

“Now, I don’t hear anyone saying it’s such a deterrent," he said.

New York City voters historically account for between 52% and 55% in Democratic primaries, with 19% from the downstate suburbs and 25% to 30% from upstate, he said. Key also, Gyory said, is that women tend to make up 58% to 60% of the Democratic primary vote.

What does that all matter? If Hochul can carry three, and certainly four, of those major New York City voting blocs, then “New York City’s de facto regional edge in terms of vote share is all but erased in a statewide Democratic primary," Gyory said.

Gyory says there are paths to a Hochul primary win and that, today, she is the strongest among potential candidates to beat a Republican next November.

In a general election, 42% to 45% of the vote will come from upstate. He believes the swing voters in November of 2022 will be moderate, white Catholics in the suburbs of downstate and upstate. And 53% of general election voters will be women, most of whom support abortion rights. “Thus, a pro-choice, pro-environmental, Irish Catholic Democratic governor from Western New York who is a woman is kryptonite to the Republicans," Gyory said.

To get to November 2022, though, Hochul first needs to get through the the June primary, unless she can somehow clear the Democratic field when party leaders gather in February for their gubernatorial nominating convention.

Gianaris, the Queens senator, said Hochul “has come a long way from a couple of months ago” in her quest to get better known by New York City Democratic voters.

“But there’s still more work to be done," he said.

Attorney General Letitia James this afternoon formally announced her bid to become New York governor, setting up a powerful showdown between the state’s top lawyer from Brooklyn and Gov. Kathy Hochul of Buffalo.

If the New York mayor runs – and even if he doesn't – it's clear that working to expand education opportunities to include universal pre-K and summer enrichment programs for all New Yorkers will serve as the foundation for his immediate future.

New York Attorney General Letitia James, who Democratic insiders just months ago believed would be the immediate front-runner in a governor’s race, ended her gubernatorial run after just six weeks.

'New York is only as strong as its workers': Hochul visits Mercy Hospital picket line

On the 20th day of the Mercy Hospital strike, Gov. Kathy Hochul visited the picket line. 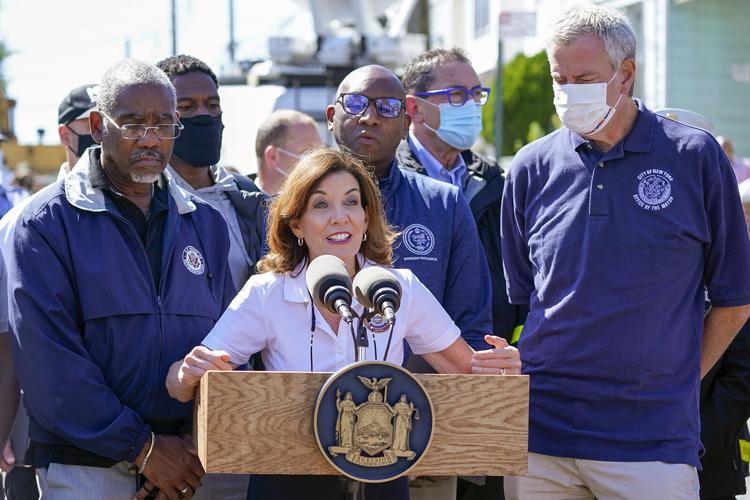 Gov. Kathy Hochul, center, is joined by Mayor Bill de Blasio, right, during a news conference Sept. 2 near a home where people were killed when their basement apartment was flooded in the Jamaica neighborhood of Queens. 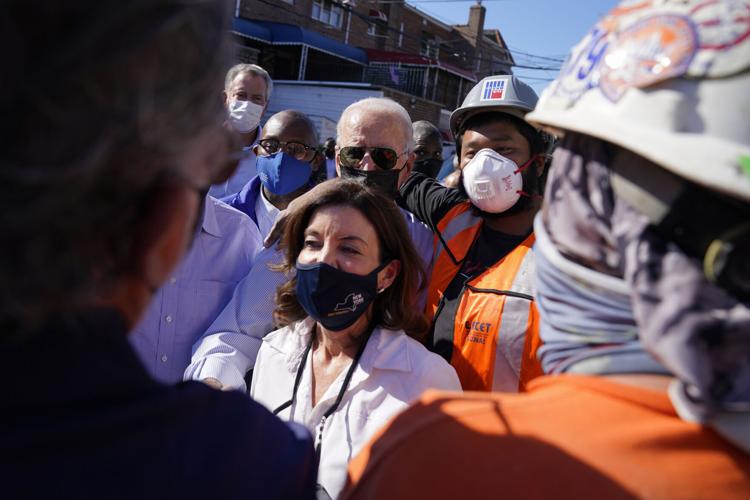 President Joe Biden and Gov. Kathy Hochul tour a Queens neighborhood impacted by flooding from the remnants of Hurricane Ida on Sept. 7.