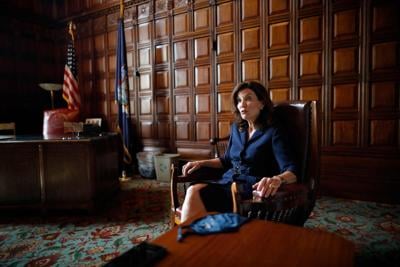 ALBANY – Kathy Hochul presented herself to New Yorkers on Wednesday as the incoming 57th governor of New York, saying she is ready to tackle rising Covid-19 caseloads, economic worries and other issues that have not gotten the full attention of scandal-distracted Gov. Andrew M. Cuomo.

“I’m ready. I want people to know I’m ready for this," Hochul said in a brief, 20-minute appearance before reporters in the Capitol on Wednesday afternoon.

Several names are already in play, and Hochul said she is “cognizant of the need for diversity.”

That seems to indicate Hochul will want a minority and someone from downstate. Several names of state lawmakers from New York City and others have been floating about political circles.

Hochul said she would give a more detailed speech on her agenda as governor after she is sworn in Aug. 24. She added that New York can be led by only one governor and, for now, that is Cuomo.

The lieutenant governor praised the “accomplishments” of the Cuomo administration, noting that she would continue many of the policies underway. She also said she appreciated that Cuomo called her yesterday to pledge his cooperation in the transition.

But she also made clear that she was no longer the strict Cuomo loyalist that she had been since first running with him in 2014, even after Cuomo tried to dump her as running mate in 2018 – an attempt she was able to end-run by building up support among Democrats, especially women lawmakers.

“I think it’s been no secret and it’s clear that I have not been close” to Cuomo, Hochul said in revealing one of the worst-kept secrets in Albany.

Hochul said it is right that Cuomo is resigning in the wake of the damaging – politically and potentially legally – report by Attorney General Letitia James that accused Cuomo of sexually harassing women, including young women on his staff.

“At the end of my term, whenever it ends, no one will describe my administration as a toxic work environment," she said of terms the James report used to describe the culture of intimidation within the Cuomo administration.

Further, she said no Cuomo staffer named in the report as having done anything unethical “will remain in my administration.”

Stylistically and rhetorically, the differences between a Cuomo and Hochul news conference were many. Cuomo was known to lecture reporters asking questions. She did not. She also did not portray herself as an expert on all topics, instead acknowledging she will need a team of people to help her.

Hochul talked of working with “partners” across government, which Cuomo has often not been willing to do, especially with people who were not his loyalists.

Cuomo often exceeded 30 minutes with his opening remarks. She kept hers to 182 seconds and then answered questions for 20 minutes.

“No tricks and no silliness," was how Hank Sheinkopf, a Democratic political consultant, described Hochul’s address.

“This was a very direct, almost collegial, very conciliatory moment for her, and she was just direct about it. There was no pain, no anger, no angst … her argument was ‘let’s move along and, by the way, I’m a serious person,' " he said.

Sheinkopf said it was Hochul's most important moment as a politician, and she was focused on a message to both New Yorkers and Democratic insiders. He said she seemed to recognize the importance of an upstate and downstate outreach while also sending a message to Democrats who want to be governor: “That she’s going to be very difficult to get past.”

The name "Nathan Miller” is hardly chiseled on marble pillars throughout New York. Still, it is a name to remember today, as Western New York native Kathy Hochul waits to ascend to governor after the resignation of Andrew Cuomo.

In a not-so-subtle reference to the stylings of Cuomo, Hochul briefly described her style as one of listening first, and then taking “decisive” action.

The rise of Hochul is the second time in 13 years that a New York lieutenant governor has become the state’s chief executive because sexual scandal forced a governor to resign: Eliot Spitzer in 2008 and Cuomo this week.

Hochul’s introduction was important because so few in the state know much about her, in part because of the limited tasks of lieutenant governor in New York and because Cuomo in recent years rarely shared the spotlight with her.

Hochul, unlike David Paterson in 2008, did not reveal any personal bombshells about herself.

In March 2008, on his first day in office, Paterson, appearing before the press corps at the Capitol, volunteered that he had cheated on his wife, in part, because she had cheated on him. Paterson would soon be called the “accidental” governor, a term he despised.

Hochul at one point said her sudden ascendancy was “unexpected," a surprise perhaps to most anyone watching the Cuomo scandals play out. Democrats and Republicans have been calling for Cuomo to resign or face impeachment since at least March and Hochul, as anyone in the line of succession would have done, was said to have been privately mulling the various tasks that awaited potentially awaited her.

That happened Tuesday with Cuomo’s resignation, though he won’t leave the office until Aug. 24. In 2008, Spitzer stayed in office for five days after his resignation announcement, he said, because Paterson asked for the delay to help him with transition matters.

On Wednesday, Hochul said she did not ask Cuomo to remain in office for the 14-day period he announced the day before, but that she will “take advantage of that time.” She said she plans to put together her administration team, form her own policy priorities, focus on how she might change or keep in place Cuomo policies directed at the Covid-19 pandemic and travel the state to meet with New Yorkers – a duty with which she is already well-accustomed at given her non-stop journeys around the state for years.

The incoming governor chose the Capitol’s Blue Room for her first speech and press conference, a less ornate space than the Red Room, which is located at the other end of the Capitol and adjoins Cuomo’s personal Capitol office.

The Blue Room was favored by the late Gov. Mario Cuomo, the outgoing governor’s father, for public events. His son studiously avoided the space, in part, because governors had to walk through the Capitol’s public halls – with its protestors or tourists or pestering reporters in chase – to get back to their private offices.

The Blue Room was designed in the late 1800s by noted architect Leopold Eidlitz. In the ways of Albany even back then, disagreements over the Capitol’s design led to officials to pick Eidlitz to design one part of the building while H.H. Richardson employed a more dramatic flair to design spaces such as those used by Cuomo every day.

On the second floor Wednesday at the Capitol, fatigued by scandal after scandal, Hochul sought to present her own description of herself to New Yorkers, without the soaring rhetorical flourishes the public has been accustomed to over the years from Cuomo.

Hochul offered no slogans or catch phrases. The closest she came was this: “The promise I make to all New Yorkers, right here and right now: I will fight like hell for you every single day, like I’ve always done and always will."

Watch now: Hochul says she is ready and able to lead a scandal-weary state government

"I'm the most prepared person to assume this responsibility, and I'm going to ask the voters at some point for their faith in me again," Hochul said.

The Editorial Board: It seems to us – Rhymes with ‘local’; Hochul’s media history; and the end of impeachment

All around the country, the airwaves were buzzing with the news about Kathy Hochul. Not just that she was about to become New York’s governor,…

After facing the national media Sunday morning with appearances on CNN and CBS, Lt. Gov. Kathy Hochul retreated to a park bench at the Erie County Fairgrounds in Hamburg to savor one of her favorite fair treats.

While Gov. Andrew M. Cuomo’s office, for a fourth straight day, would not publicly say Monday when Cuomo will depart his job, Hochul's officials said they have now officially been told of the embattled Cuomo’s exit: next Monday at 11:59 p.m.

New York Attorney General Letitia James, who Democratic insiders just months ago believed would be the immediate front-runner in a governor’s race, ended her gubernatorial run after just six weeks.

A defiant Cuomo denied groping any women, but apologized for his actions in a 30-minute resignation speech broadcast exactly a week after Attorney General Letitia James released the scathing results of an investigation into accusations Cuomo sexually harassed 11 women. 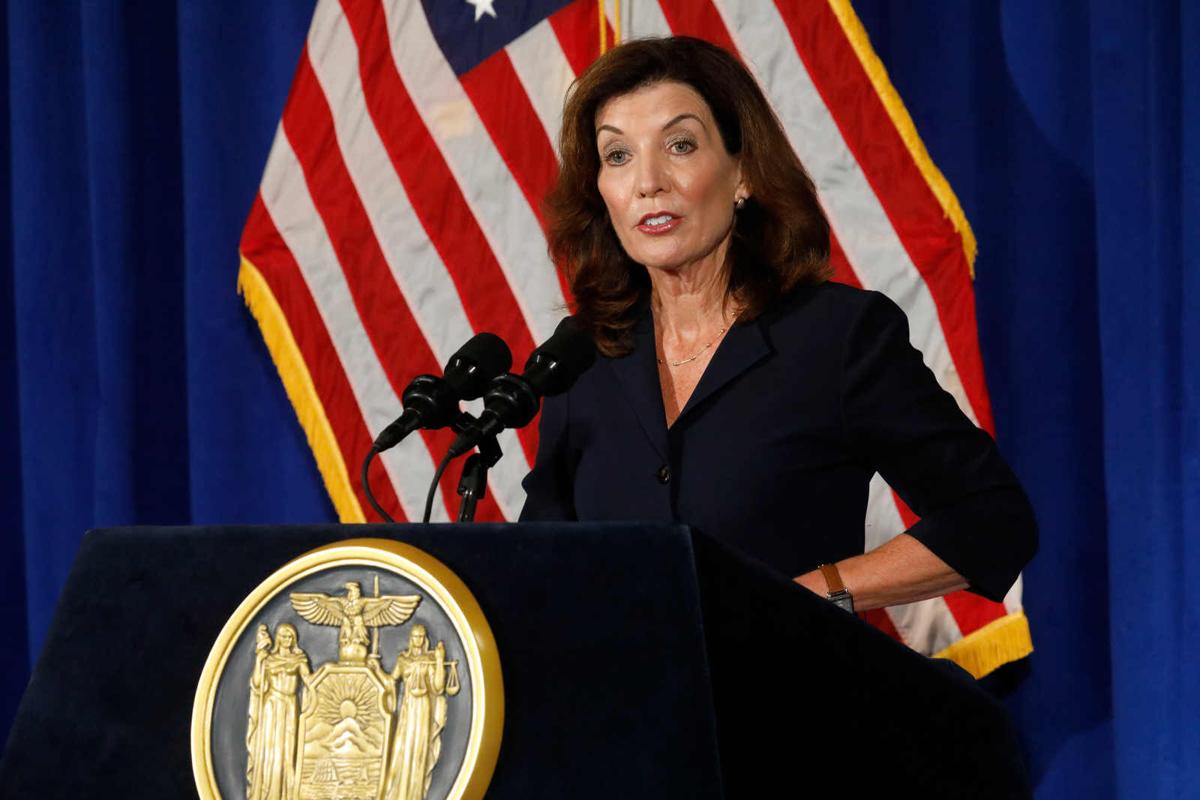 Lt. Gov. Kathy Hochul speaks during an address in the Blue Room in the Capitol building in Albany. 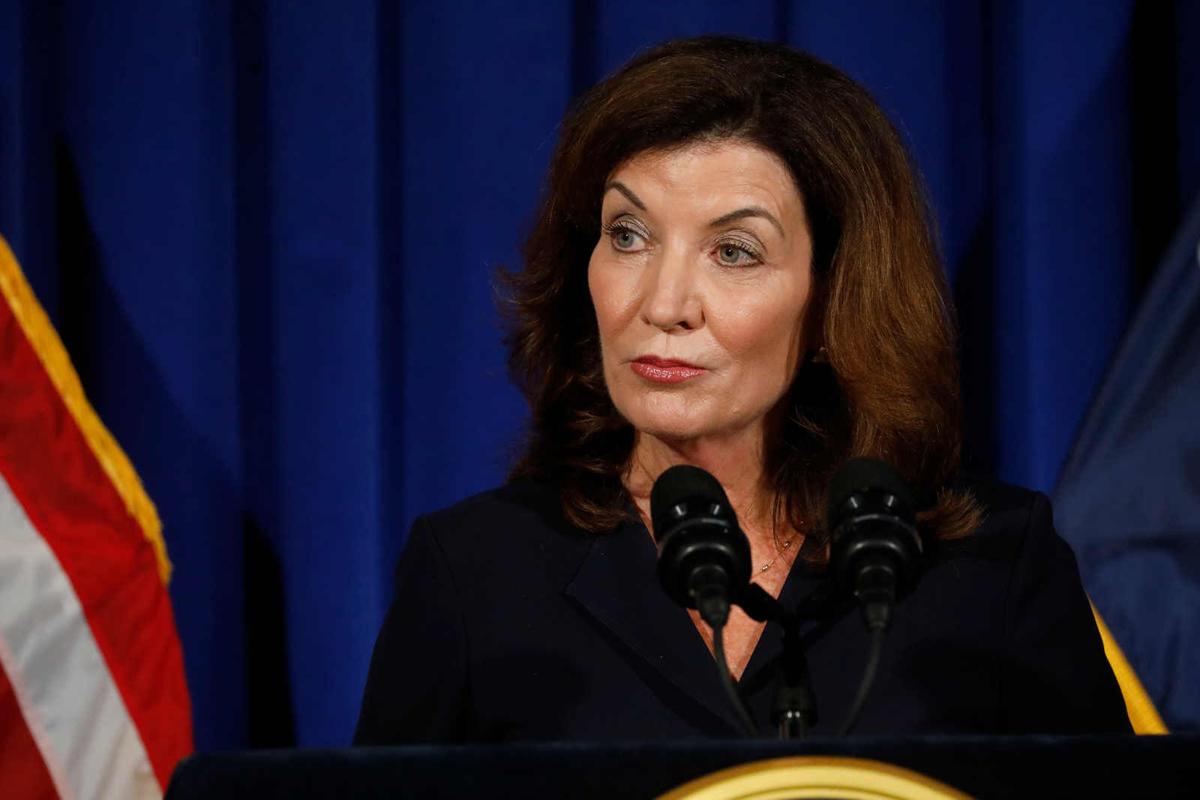 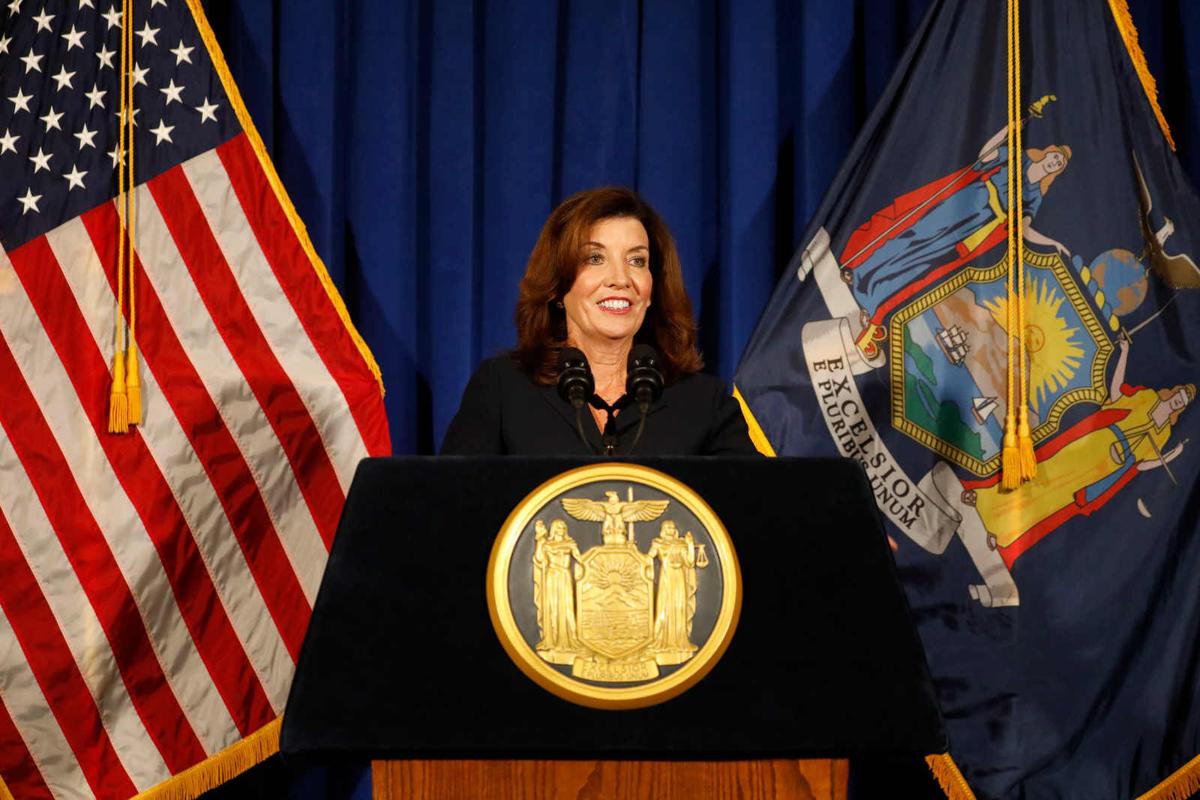