ALBANY – In January of 2005, Donna Lupardo, a Binghamton-area Democrat, got out of her car in a parking garage beneath the State Capitol complex and ran into Charles Lavine, who, like her, was there on his first day as a member of the State Assembly.

“Fix Albany,’’ read the bumper sticker on Lavine’s car, a reminder of the hard-fought campaign a couple of months earlier when Lavine defeated a 12-year Democratic lawmaker who was very popular with his colleagues in the Assembly.

Lupardo already knew, as an incoming freshman, that she wanted many of the things Lavine ran on in his campaign: on-time state budgets, more say in matters from rank-and-file lawmakers and things like mandatory in-seat voting by lawmakers instead of the loose ways bill votes had been conducted.

Insurgent is not a term many longtime lawmakers like to hear to describe a new colleague. But Lavine, Lupardo said, is today one of the most respected members of the Assembly Democratic conference.

“I’ve always held him in the highest regard,’’ said Lupardo, now in her ninth term, of Lavine, whom she considers a friend.

Charles Lavine is not a household name, but it will be in the coming weeks. He is the head of an Assembly committee charged with running an investigation to determine if Gov. Andrew M. Cuomo should be impeached over the scandals in which he is embroiled.

To critics, it’s a rigged probe designed by the Assembly's Democratic leadership to buy some time for a Democratic governor who has witnessed more than half of the Legislature call for his resignation. If Cuomo doesn’t resign soon, the critics say, the Assembly should immediately move to impeach him rather than spend weeks or potentially months investigating him through Lavine’s panel.

But Democrats and Republicans alike say Lavine, a 73-year-old Democrat from Nassau County who chairs the Assembly Judiciary Committee, is the right person among the 107 Assembly Democrats to run an investigation that is as impartial and fair as any can be that is overseen by elected politicians.

“He’s a fine and decent person who will do this as fairly as possible and let the facts take him to a final decision,’’ said Assemblyman Joseph Giglio, a Republican from Gowanda.

Giglio has served on the Assembly ethics committee – which Lavine chaired and is the only Assembly committee with an equal number of Democrats as Republicans in the Democratic-dominated chamber – during a number of investigations of Assembly Democrats who ended up resigning after allegations of sexual harassment or abuse, from Democrat Dennis Gabryzak of Western New York to Vito Lopez, the onetime Brooklyn Democrat powerhouse.

Lavine later co-chaired a task force that created a revised set of more clear sexual harassment policies for the Assembly.

“He always provides such an interesting perspective, level-headed and calming,’’ Lupardo said of Lavine, who colleagues describe as a protector of the institution of the Legislature and a lover of history.

Giglio said Lavine never displayed partisan leanings in the highly secretive process of investigating and interviewing fellow lawmakers facing allegations. “Chuck is a professional and a very good attorney and our interactions on everything have been fair,’’ he said.

Lavine now faces his greatest challenge: investigating the top Democrat in New York while all eyes in the press, political circles, the lobbying industry and the public will on him. Can Lavine, with the help of three outside lawyers, two of whom are former federal criminal prosecutors, run a probe of Cuomo that is credible? How will the investigative process be run? And will any interviews be conducted in public and, importantly, will Cuomo be called to testify under oath in public?

Cuomo's father, Mario, testified in public in 1987 when he was the governor when an anti-corruption panel was doing an investigation of various alleged abuses in Albany.

Several women, including former staffers and a current staff member, have accused Cuomo of inappropriate behavior, including sexual harassment. He is already being investigated by outside lawyers hired by Attorney General Letitia James. Further, Cuomo’s handling of Covid-19 in nursing homes, including that he kept hidden the true number of nursing home residents who died from the disease, is also the subject of a separate federal investigation.

Lavine’s charge from Assembly Speaker Carl Heastie is a broad one: He can look at any of the scandals, from harassment allegations to the nursing home policies to another involving potential construction problems with a $4 billion bridge, named for Cuomo’s father, that spans the Hudson River in Westchester County.

Critics of the Assembly process also panned the appointment Thursday of a Manhattan law firm to help Lavine with his investigation; one of Cuomo’s accusers and a lawyer for a second accuser raised concerns about the hiring of David Polk & Wardwell. They have said they won't participate in the Assembly investigation of Cuomo.

A former partner at the firm, Dennis Glazer, was a Cuomo political appointee to SUNY and a casino selection panel, and his wife is Janet DiFiore, whom Cuomo tapped in 2015 to serve as chief judge of New York. Heastie officials dismissed the criticism, noting Glazer left the firm nearly a decade ago and that two of the firm’s lawyers assisting Lavine are former senior federal prosecutors.

Lavine, for this article, took a route he often does with reporters: no comment. During any range of investigations he led on the ethics committee, Lavine was steadfast in not giving out information, as many reporters and his fellow lawmakers have learned over the years.

Lavine grew up in Wisconsin north of Green Bay, as well as the Upper Peninsula of Michigan. He went to college at Madison where he studied English literature, and graduated from New York Law School.

In the 1970s, he was a staff attorney with the Legal Aid Society of New York City, before going on to become a criminal defense attorney in a number of high-profile cases. He was on a government referral list of defense lawyers for two downstate federal court systems.

Among his cases: representing a crew member on a ship that was caught bringing a large shipment of cocaine into New York Harbor; a murder case involving a member of the Green Dragons, which operated in Queens, and the 1993 case against Fadil Abdelgani, one of the 1993 conspirators working for Egyptian cleric Sheikh Omar Abdel-Rahman in a plot to bomb several buildings, including the United Nations. Abdelgani, after serving prison time, several years ago was deported to Sudan.

Lavine, whose law firm today is inactive, is married with two grown children and grandchildren and is a longtime resident of Glen Cove, a Nassau County city on Long Island’s North Shore. He served briefly on its City Council before running against then-Assemblyman David Sidikman in 2004.

“I was somewhat appalled that he targeted Sidikman. Let’s just say that was probably not the best beginning of our friendship,’’ recalled state Comptroller Thomas DiNapoli, a Democrat.

“When he came to Albany I was a little bit leery of him. He ran against an incumbent and beat an incumbent. That just said to me you have to be careful of this guy. Boy, was I wrong,’’ said Assemblyman Michael Benedetto, a Bronx Democrat also elected in 2004.

Quickly, his fellow Democrats saw something different in Lavine, who they describe as sharp, an expert on many aspects of state law, and a person of few, but precise, words when he rises during private Democratic Assembly conferences.

“He’s a good person and a smart person. He is listened to when he speaks up,’’ Benedetto said.

Lavine is not known for being part of the Albany nightlife scene, in which some lawmakers and lobbyists go out for long nights of eating and drinking.

A place in history books?

Benedetto, good friends for years with Lavine, says his colleague is honest and keeps confidential what should be kept confidential. “It’s hard for me to believe that he hasn’t been slowly training for this his entire life,’’ Benedetto said of Lavine’s job as Judiciary Committee chairman overseeing the Cuomo impeachment investigation.

Blair Horner, executive director of the New York Public Interest Group, said Lavine "came in as an outsider and clearly has become an important member of the (Democratic) conference. I think they rely on him for his legal expertise. He's one of the nicest people in the Legislature and is always even-keeled."

DiNapoli, also close friends with Lavine, said he quickly saw in Lavine in 2005 a lawmaker who had some insurgent ideas but went out of his way to establish himself as a colleague first.

“He’s someone I trusted immensely not just for his intelligence and political intuition, but his political style. He’s a deep-thinking legislator,’’ DiNapoli said.

Now, Lavine has begun a process investigating Cuomo – with full subpoena-issuance powers – and no one knows how it might conclude.

"The fact that the Assembly delegated to his Judiciary Committee means that the hot potato is sitting in Chuck’s lap,’’ DiNapoli said. “I think he is someone who brings a very high level of credibility to what is going to be a very sensitive and closely watched process.

“He’ll be in the history books on this one, no question about it,’’ the comptroller said.

Lawmakers tell Cuomo not to retaliate against staffers during impeachment probe

Assemblyman Charles Lavine said he had served a demand upon the governor that no retaliation take place against people cooperating with an impeachment investigation.

Heastie, who received his first dose of the Covid-19 vaccine March 6, said he has been experiencing “extremely mild” symptoms.

The documents, released after multiple delays by Cuomo’s office over the months, did not shine specific light on how much the governor was paid or is due in royalties for the book deal.

Gov. Andrew M. Cuomo could be ousted “in a matter of weeks, not months” if a committee charged with investigating the Democratic governor recommends the legal articles of impeachment to the full Assembly, Assembly Speaker Carl Heastie said Monday.

The firm of Davis Polk & Wardwell, whose lawyers include a number of former senior federal prosecutors, will have broad authority to investigate all of the scandals engulfing Gov. Andrew M. Cuomo.

The Siena College poll found that only one-third of respondents believe the governor should run again.

Amid growing calls for resignation, Cuomo says he won't step down

After a virtual meeting with his colleagues, Assembly Speaker Carl Heastie said the chamber's judiciary committee will launch a probe of Cuomo into "misconduct" allegations lodged against the embattled three-term governor.

The publisher is also not doing any further reprints, and plans for a softcover edition have been scrubbed. 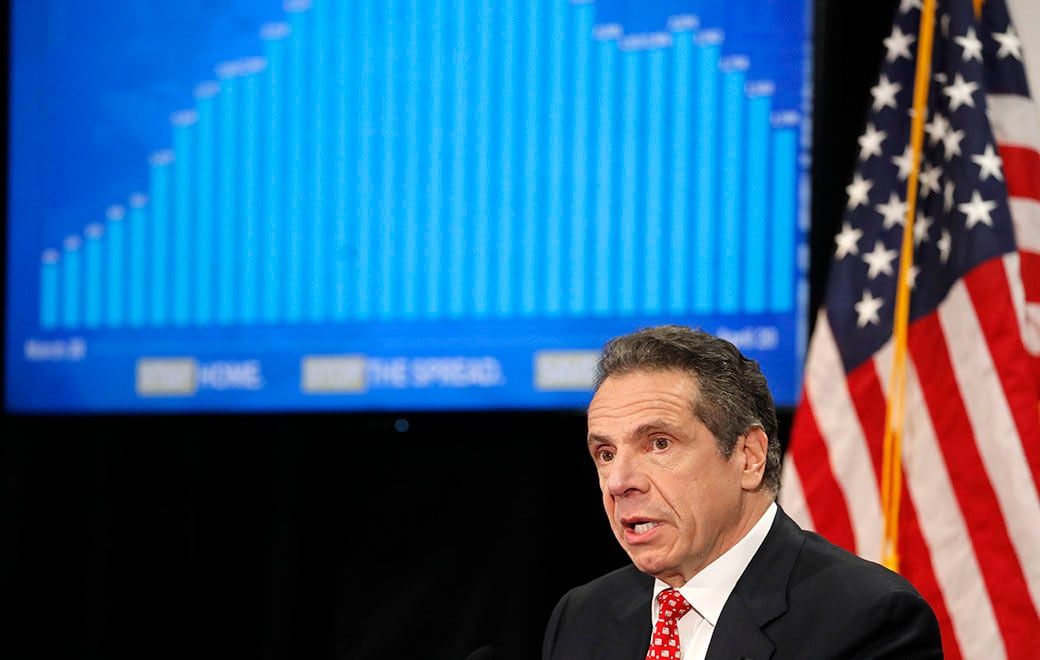 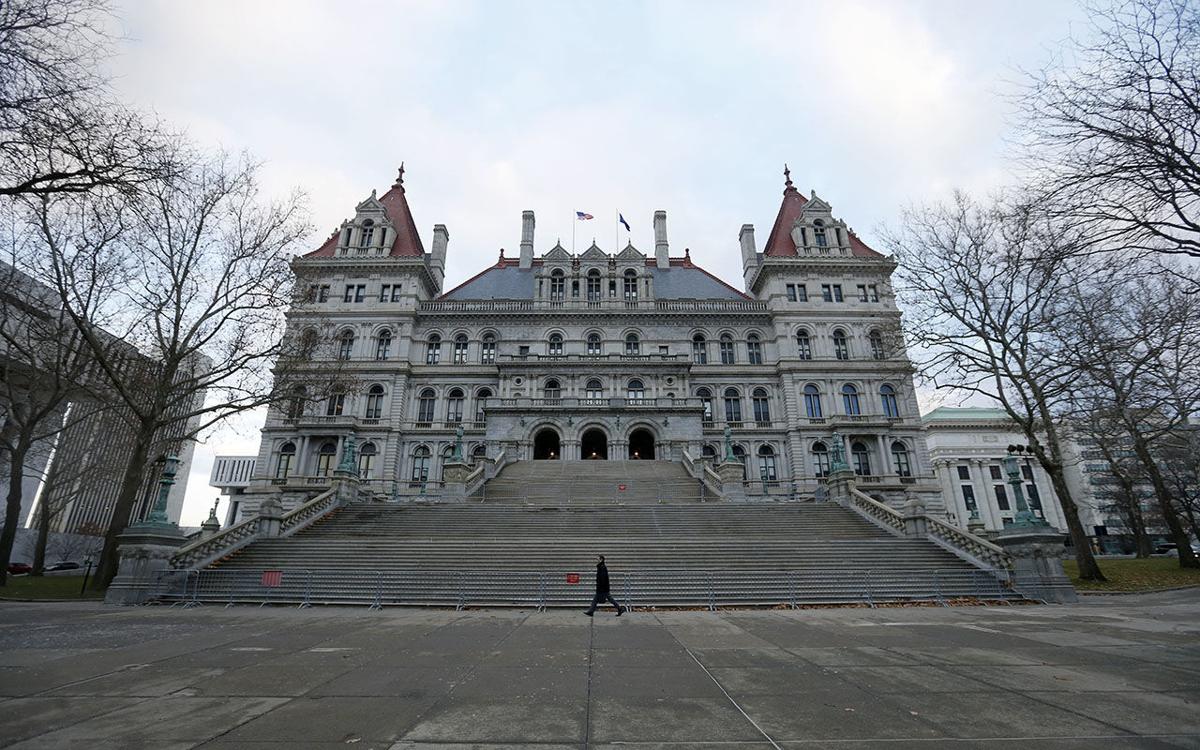