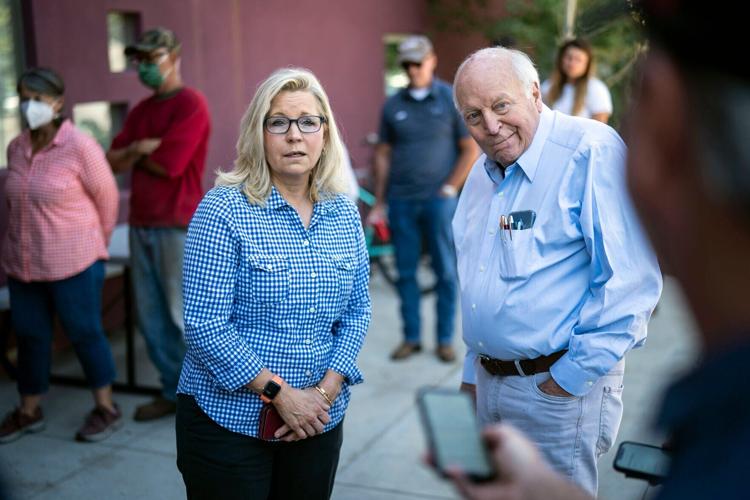 Rep. Liz Cheney arrives, with her father, former Vice President Dick Cheney, to vote at the Teton County Library during the Republican primary election on Tuesday in Jackson. 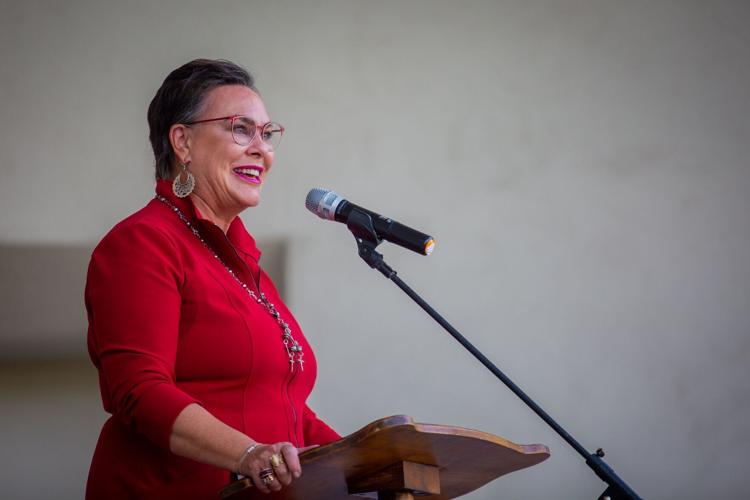 Harriet Hageman, candidate for the U.S. House of Representatives, takes the mic during Politics in the Park on Aug. 4 at Washington Park in Casper. 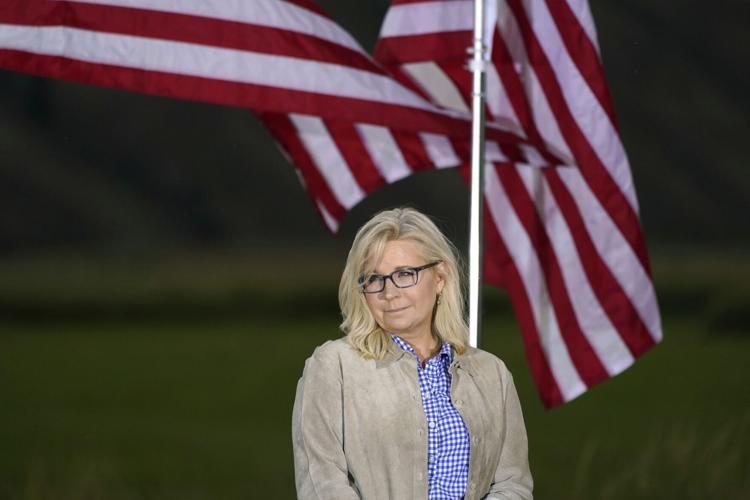 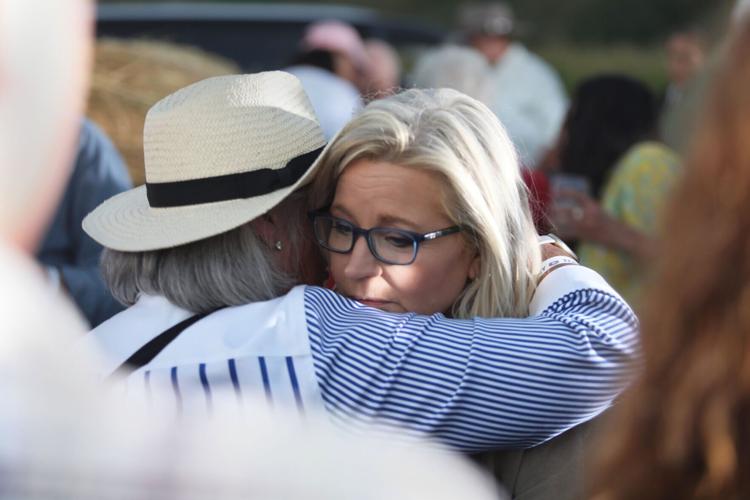 Rep. Liz Cheney is hugged by a supporter on Tuesday in Jackson after her loss to challenger Harriet Hageman. Cheney said she would continue to do whatever she could to keep former President Donald Trump from office.

JACKSON — After his second impeachment, former President Donald Trump made it his mission to oust Rep. Liz Cheney, his chief Republican rival. On Tuesday, he succeeded.

In possibly the biggest congressional race in Wyoming’s history, Cheney lost to Trump-backed natural resources attorney Harriet Hageman. It marked the first time a Cheney has lost an election in Wyoming in nearly half a century.

Cheney struck a determined tone in her concession speech to supporters in Jackson.

“I have said since Jan. 6 that I will do whatever it takes to ensure Donald Trump is never again anywhere near the Oval Office,” she told them. “And I mean it.”

At the time the race was called, Hageman held about 60% of the vote. Cheney trailed with 35%. About 22% of the total vote had been reported.

“Tonight, Harriet Hageman has received the most votes in the primary,” Cheney told her supporters. “She won. I called her to concede the race. But now the real work begins.”

The results did not come as a surprise: Polls showed the congresswoman losing badly. Wyoming voters repeatedly told the Star-Tribune that they feel “betrayed” and “used” by Cheney, as she battled the former president over his role in the Jan. 6 insurrection and repeated lies about the 2020 election.

Hageman, who grew up on a ranch near Fort Laramie and now lives in Cheyenne, entered the race with Trump’s endorsement nearly a year ago, prompting some other Republican challengers to bow out. Sen. Anthony Bouchard, R-Burns, however, remained in the race.

The congresswoman’s defeat — seen by some as a referendum on the strength of the former president’s grip on the future of the GOP — is the final flash point in a closely watched saga that has been building for over a year.

Following the Jan. 6 attack on the U.S. Capitol, Cheney was one of 10 House Republicans to vote to impeach the former president, beginning her fall from power. Less than a month later, the House Republican Conference held a secret ballot on whether to remove Cheney as their chair. Cheney safely survived 61-145, but did not back down in her criticism of the former president. Only days later, the Wyoming GOP censured her for her vote to impeach Trump. In mid-May, Cheney was ousted from House leadership in a voice vote.

But her adversaries did not stop there — in November, Wyoming Republican leaders voted to symbolically no longer recognize Cheney as a member of their party.

“Two years ago, I won this primary with 73% of the vote. I could easily have done the same again," Cheney said Tuesday night. "The path was clear, but it would’ve required that I go along with President Trump’s lie about the 2020 election.”

The incumbent congresswoman was later selected to serve as vice chair of the Jan. 6 investigative committee, which angered Wyomingites further. During peak campaign season, Cheney spent most of her time in D.C. serving on the committee. When she did come to Wyoming, she campaigned almost entirely at private events.

The Cheney family has strong ties to Wyoming, and her candidacy in this race disrupted much of the political order here.

Lifelong Democrats switched their party affiliation to vote for Cheney, a staunch conservative who, despite her moral opposition to Trump, voted with him roughly 93% of the time during his term. More money was poured into this race than has been seen in Wyoming’s recent political history, including funds from national super PACs. Her candidacy also prompted Trump and high-profile Kentucky Sen. Rand Paul to endorse an election reform bill during the state’s legislative session that backers saw as a way to lessen her chances of victory.

In early July, a Mason-Dixon Polling & Strategies/Star-Tribune survey of likely voters found Cheney was trailing by 22 points. A few weeks later, a University of Wyoming survey of a random sample of Wyomingites found Hageman up 29 points.

The Star-Tribune poll found that only 11% of primary voters were undecided, reiterating the fact that this was not only a prominent race nationally, but statewide too.

Despite the fact that Hageman repeatedly touted Trump’s endorsement on the campaign trail, she did not take a firm stance on the legitimacy of the 2020 presidential election until a few weeks before the primary.

“Absolutely the election was rigged,” she told a Casper crowd. “It was rigged to make sure that President Trump could not get reelected.”

Of likely voters who said they supported Hageman, only 16% believe that President Joe Biden’s election was legitimate, according the UW poll. That’s compared to 94% of Cheney supporters who believe the result was legitimate.

Cheney has coasted to victory since she first ran for U.S. House in 2016. But before Hageman, she has never faced such a well-funded, well-supported challenger.

Cheney, the daughter of Wyoming political icon and former Vice President Dick Cheney, got her start in the federal government with a job in the Department of State’s Near Eastern Affairs bureau. She first ran for elected office in 2013 against popular three-term incumbent Sen. Mike Enzi, but she bowed out a few months later, citing family health issues.

Now, Hageman is likely to be Wyoming’s next representative, as the Republican House nominee often easily wins in Wyoming’s general election. Hageman is a fourth-generation Wyomingite who grew up on a ranch outside of Fort Laramie. She attended Casper College and the University of Wyoming.

Cheney and Hageman used to be political allies, and like other Trump-endorsed candidates, Hageman once publicly opposed him.

Cheney’s next steps are unclear, but she shows no sign of backing out of politics or her battle against Trump and his allies. She has said that a 2024 presidential bid is not out of the question. Her failed House campaign has almost $7.5 million in the bank, which can legally be used in any federal race if it doesn’t get spent in her House race.

Cheney arrived shortly after her mother and father, the former vice president, Tuesday night. She was applauded as she entered and was introduced by the owners of the venue. The soon-to-be former congresswoman spoke for about 15 minutes and quickly told the crowd that she had conceded the race. She left through the small crowd, hugging some people. She immediately departed in the same vehicle she arrived in and did not take questions from the press. She later came back to the venue around 9 p.m. in good spirits.

She mingled with supporters after the sun had set and took a group picture with them. They all yelled “Team Cheney” as the photo was taken.

Photos: Long lines of voters turn out in Casper

Lines of voters snaked outside polling places on Tuesday in what appeared to be well-above normal turnout.

Rep. Liz Cheney arrives, with her father, former Vice President Dick Cheney, to vote at the Teton County Library during the Republican primary election on Tuesday in Jackson.

Harriet Hageman, candidate for the U.S. House of Representatives, takes the mic during Politics in the Park on Aug. 4 at Washington Park in Casper.

Rep. Liz Cheney is hugged by a supporter on Tuesday in Jackson after her loss to challenger Harriet Hageman. Cheney said she would continue to do whatever she could to keep former President Donald Trump from office.