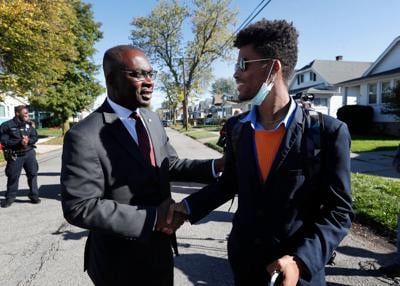 Mayor Byron Brown stood outside the Delavan Grider Community Center as a steady flow of East Side residents arrived for early voting on a weekday afternoon last week.

How to fix Buffalo's poverty? Mayoral candidates differ but agree City Hall can't do it alone

Few would argue that poverty isn’t a colossal problem in Buffalo – a problem so entrenched and ubiquitous, in fact, that it’s almost taken as a given. But India Walton and Byron Brown differ sharply in their beliefs about the policies best suited to address it.

Under a portable tent stacked with "Write Down Byron Brown" literature, the mayor and his team distributed pre-inked stamps emblazoned with his name and instructions for entering it on the ballot. They also handed out pamphlets and cards with exact directions for writing or stamping his name in the ballot's lower right corner, all part of the day's efforts to educate voters on the mechanics of a write-in vote.

"That's the key," Brown volunteer Kerry Saunders said as Brown looked on. "All you do is fill in the (write-in) oval and then write in the box for mayor. And right now we have a lot of people taking our stamps."

How Brown succeeds in this unusual campaign tactic will determine if he defeats India Walton for an unprecedented fifth term as mayor of New York's second-largest city. It's uncharted territory for this veteran of the city's formidable Democratic politics. That's because after losing the June Democratic party to Walton, he must not only defeat the endorsed nominee of his party in voting that ends Tuesday, but do it in a write-in effort rarely attempted on such a large scale.

From Wednesday's debate at St. Joseph's Collegiate Institute, to an East Side event marking a neighborhood "Clean Sweep" event, to stops at various early voting sites, the mayor is a familiar sight. Everyone knows him. And just about everyone, it seems, has determined their vote. That's evident at the Delavan Grider Community Center, where his supporters accepted the stamp – but his opponents didn't.

"I voted for Mayor Brown," said a woman emerging from the community center, but who declined to give her name. "Look at the nice center we have. It wasn't here before he came."

Another man stepped out and pronounced it nobody's business for whom he voted. But a young woman with him stood on tip-toes to whisper "Byron Brown" into a reporter's ear.

At the Delavan Grider Community Center, a Walton supporter at the polls seemed to personify the election's deep divisions. He complained, among other things, that the mayor stepped over a line delineating a 100-foot barrier against campaigning near a polling site and began filming on his cellphone. Brown said he didn't care about engaging the Walton supporter and left.

Indeed, his unique campaign must still follow traditional paths as he touts his administration's accomplishments and lays out plans for the future. At St. Joe's, he talked about guiding the city through a pandemic without layoffs or new taxes or cuts in services. Taking on Walton in only the second debate of the campaign, he listed city support for the Say Yes program granting scholarships to graduates of city public and charter schools, 2,200 new units of affordable housing and the city's lowest tax rate in 30 years.

"This is about the city's future," he said at St. Joe's as he laid out a choice between Walton's democratic socialism and his own record of managing the city.

In a contest marked by passionate but divided loyalties throughout the city, Walton supporters say carrying their candidate's flag in South Buffalo is a tough assignment.

Earlier in the day along Warwick Avenue on the East Side, Brown enjoyed the advantages of incumbency at the "Clean Sweep" event. The program brings together government partners to fix quality-of-life problems in low-income neighborhoods while addressing crime and providing needed social services.

Police cars blocked off both ends of Warwick, a Mayor's Impact Team truck provided a backdrop and a lectern bearing the official city seal allowed the mayor to address a small crowd while about two dozen officials and supporters stood behind him.

Brown used the occasion to address some of Walton's complaints from the debate just a few hours before. While never mentioning her name, Brown confronted her charges of ignoring the city's poor by highlighting the 32 Clean Sweep events held throughout the city this season "with resources for the most vulnerable of our residents." He said that during his time as mayor, officials have made 360 Clean Sweep visits to 4,600 homes in all nine Council districts.

After Walton complained during the debate that police officers should not deal with mental health emergencies, Brown singled out the Police Department's Capt. Amber Beyer, who heads a unit dealing with "more than 800 mental health calls since last year without a single incident."

"This is keeping people out of the criminal justice system and making a difference in the lives of people," he said.

5 issues that may decide who is Buffalo's next mayor

Following more Walton criticism of city housing programs, he pointed out that Clean Sweep events often put residents in touch with city officials dealing with absentee landlord problems or to remediate lead pipes – a frequent Walton topic. Then he motioned to the head of the city block club association behind him.

The officials lined behind Brown at Wednesday's Clean Sweep underscored the power of his incumbency, even if many Walton supporters say "it's time for a change." Brown gathered the city's fire commissioner, the citizen services director, various police officials and a council member.

Masten Council Member Ulysees O. Wingo Sr., a Brown supporter, then stepped to the lectern. One of the few elected officials to take a stand in the election, Wingo outlined details of a program he said relies on data and metrics measuring performance of city services.

"Even though he is in the midst of a very contentious mayoral campaign, you can see the mayor's work does not stop," Wingo said. "He's been doing this for 15 1/2 years now. He has the experience to lead us not just to this level, but to the next level."

Across from the mayor's event along Warwick Avenue, Rashon Roberson was taking it all in. Like all voters, he has a choice between supporting the veteran mayor who had just pointed to his accomplishments and a newcomer who demands change. He remains undecided, even after the mayor's Clean Sweep presentation in front of his home.

"I might vote for him, though I would like to see a few more improvements made," Roberson said. "At least (Clean Sweep) shows he does something.

"But I might vote for India Walton, just to switch things up with a fresh face and fresh ideas."

Who's calling the shots and speaking for the mayor's campaign? It's hard to pin down.

With just three days left in one of the most intense mayoral races in Buffalo history, India Walton and Byron Brown took to the streets Saturday to shake hands, hand out candy and persuade any undecided voters to come to their side.

Both campaigns said they are doing everything conceivable – from door-knocking to phone-banking to texting – to turn out every single one of their loyal voters while hoping to win some decisive last-minute converts.

What to watch for Tuesday night to decipher Buffalo's mayoral results

Here's a look at what to watch for as Buffalo's hotly contested race for mayor comes to a close, based on conversations with political pros who have been closely following the race.

Early voting does not necessarily equal lots of voting in the hot contest for mayor of Buffalo between incumbent Byron W. Brown and Democratic nominee India B. Walton.

The Editorial Board: America watches as Buffalo votes

America is watching as Buffalo elects a new mayor. Will it be a fifth term for Byron W. Brown or, having lost the Democratic primary to a poli…

Some Buffalo polling sites report steady flow of voters, but turnout low at many others

Today's turnout got off to a somewhat slow start at a sampling of polling sites in Buffalo and in Erie County.

Since defeating incumbent Mayor Byron W. Brown in the June Democratic primary, Walton has gone from "India Who?" to universally recognized on the streets of Buffalo. 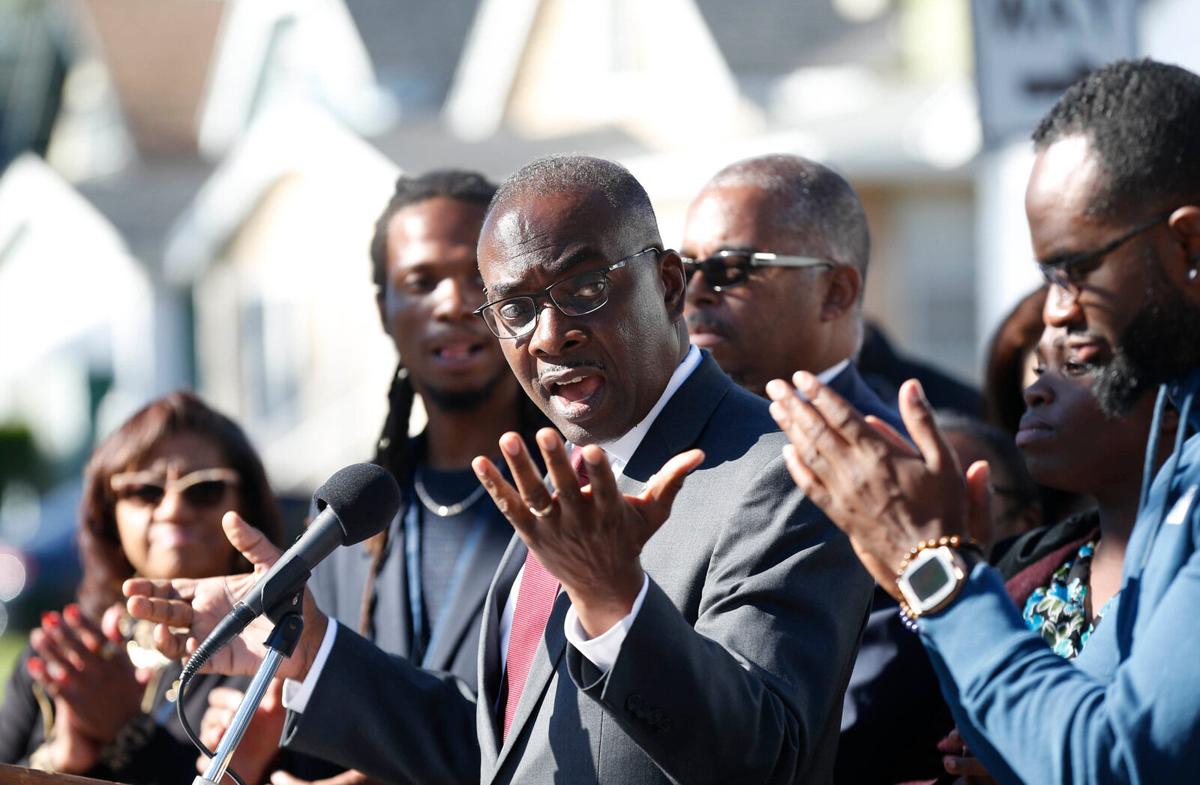 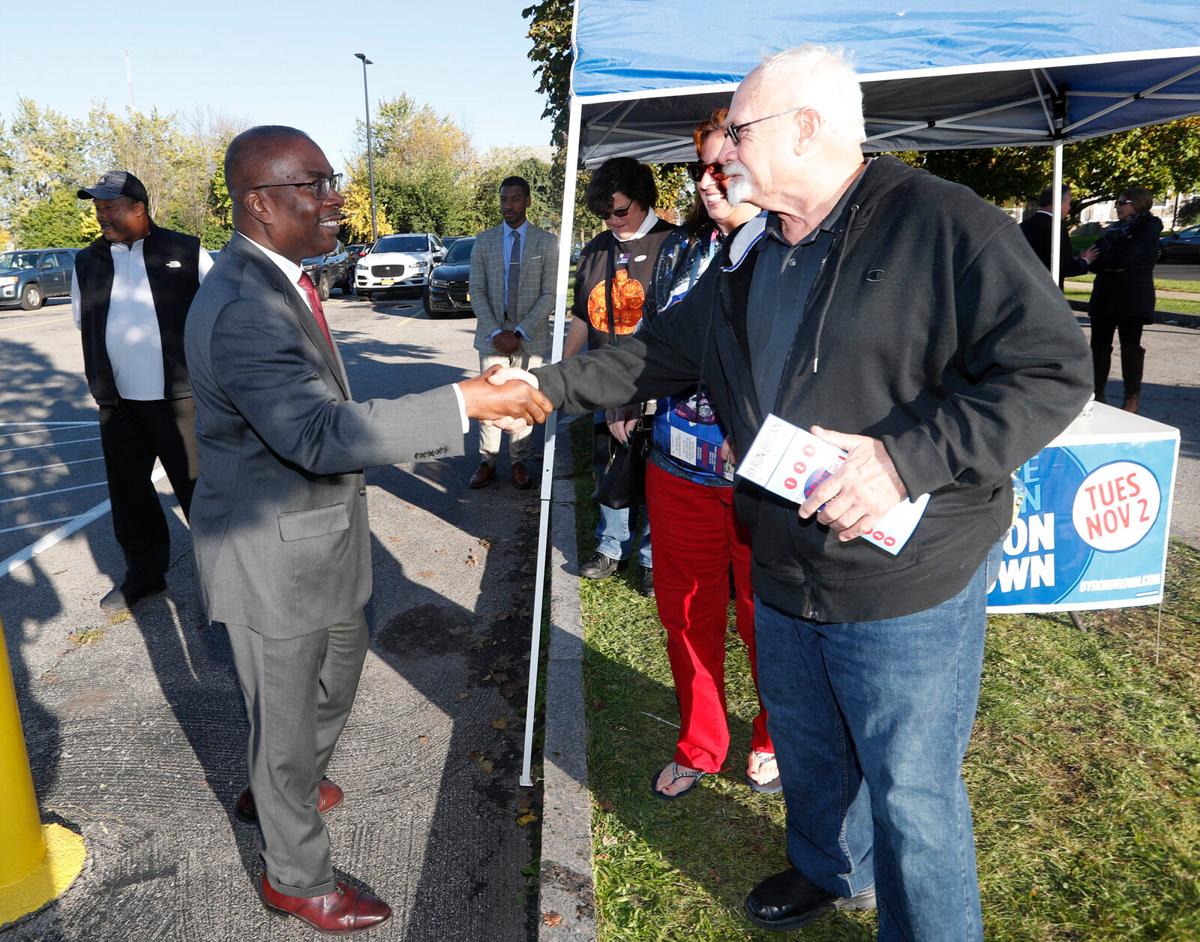 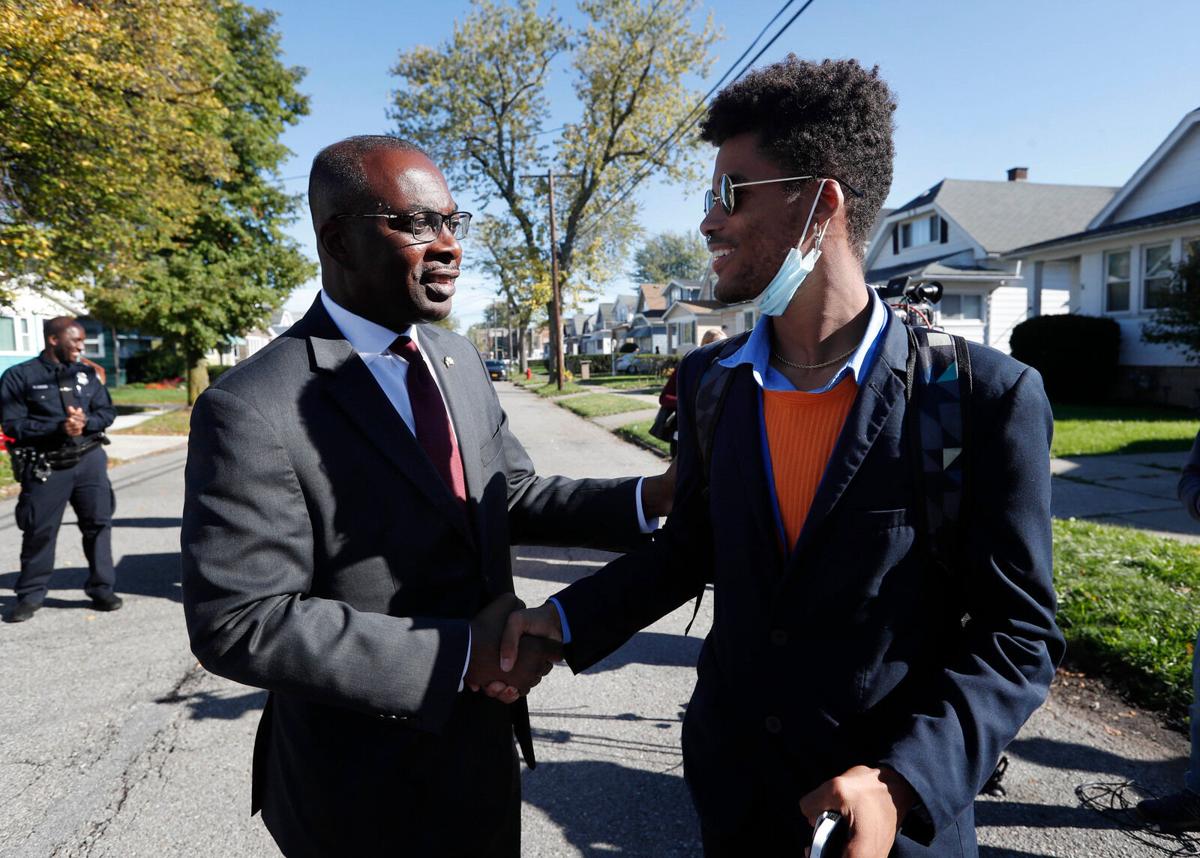 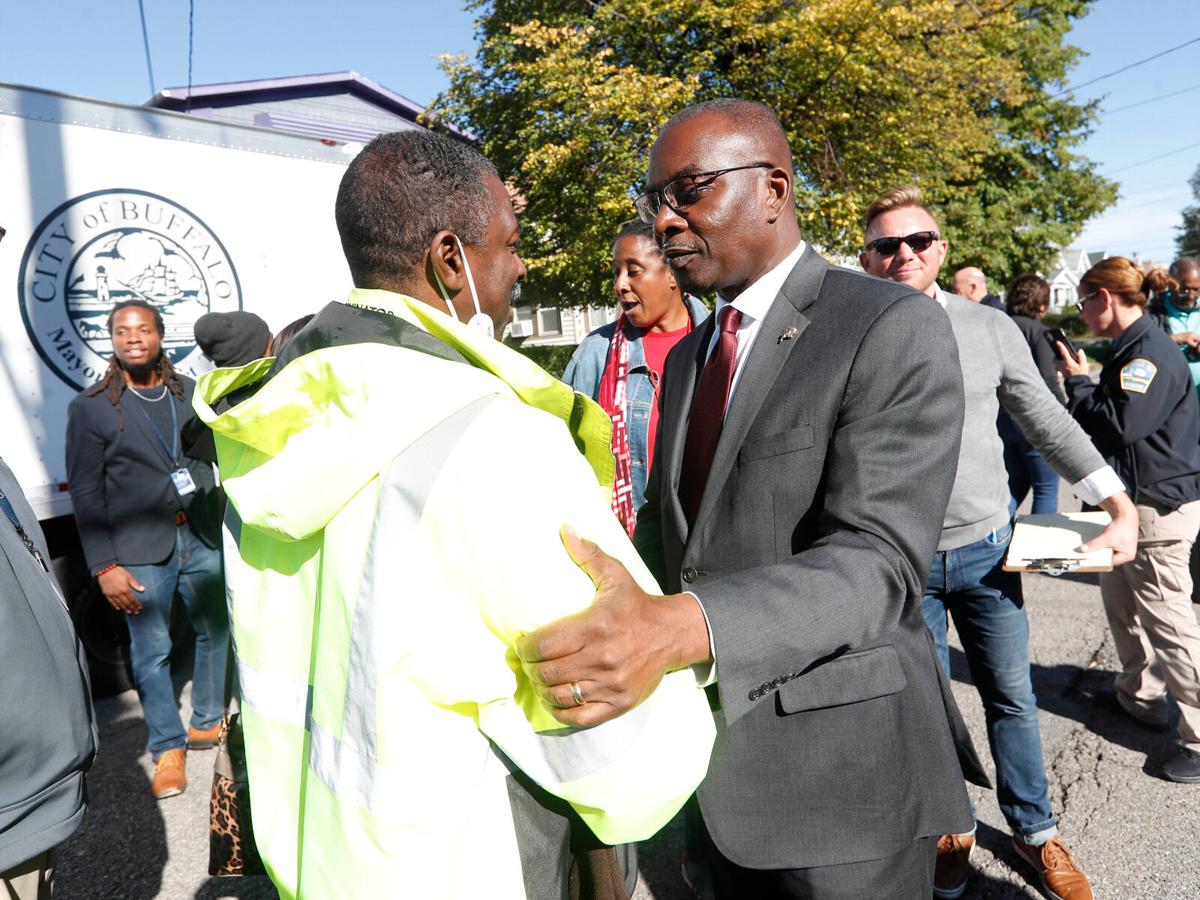