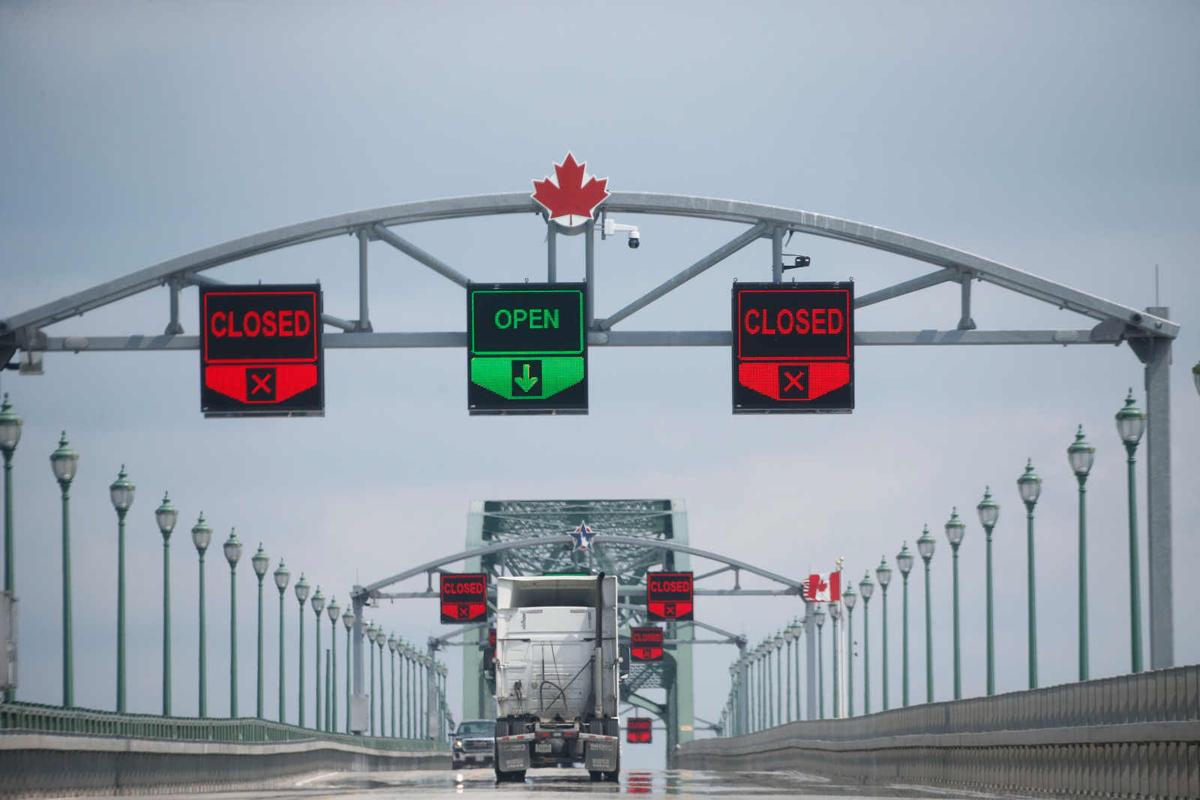 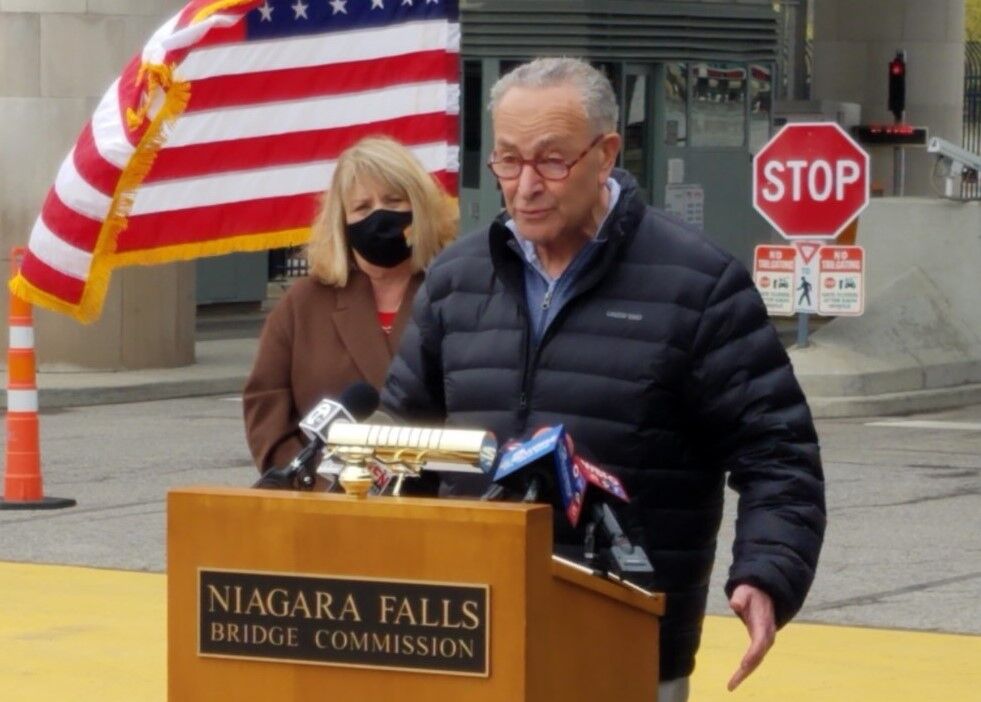 Senate Majority Leader Charles E. Schumer proposed a four-point plan for reopening the U.S.-Canada border at the Rainbow Bridge in Niagara Falls in May.

WASHINGTON – The frustration some Western New Yorkers feel about the continued closure of the U.S. border to most Canadians will be on display Tuesday in a surprising place: outside the Buffalo office of Senate Majority Leader Charles E. Schumer.

Why would protesters target Schumer, a New York Democrat who has been pressing the Biden administration for months to allow Canadians to drive to the U.S. for nonessential travel?

Because he has not signed onto a Republican bill that would force a partial border reopening.

"We're holding Schumer accountable because he's been doing nothing besides playing a rhetoric game and pretending that he cares," said Marcella Picone of Williamsville, one of the protest organizers. "At least you have the Republicans ... that are attempting to introduce legislation. So why didn't Schumer take those bills and bring it to the legislative floor? Why isn't he pushing it?"

The news that the U.S. land border will remain largely closed to Canadians came the way it often does, via Twitter rather than in a human voice – but it prompted angry and anguished cries all across the border.

"Rather than getting distracted on show legislation with little support, precedent or possibility of passing, Schumer remains laser-focused on pressing the administration – the folks with sole control of international border-crossing policy – to reopen the border for vaccinated Canadians and allow thousands of New York businesses, families and communities to finally and fully recover from the pandemic," Biasotti said.

At issue are identical bills introduced by Rep. Elise Stefanik, a Republican who represents New York's North Country, and Sen. Steve Daines, a Montana Republican. Those measures would force the U.S. to reciprocate a policy Canada instituted last year that eased border restrictions for people who want to visit family members and other loved ones in the U.S.

“The Biden administration’s continued refusal to restore travel into the U.S. across the northern border is shameful – particularly as Canada opened their border to vaccinated Americans over a month ago,” Stefanik, chair of the House Republican Conference, said on Monday. “The numerous letters, calls, and statements from Republicans and Democrats alike have clearly fallen on deaf ears in the White House, so it is time for Congress to take legislative action."

“Senator Schumer has the power and authority to bring this legislation to a vote as the Majority Leader of the Senate," Stefanik added. "I urge him to take action now for the sake of New Yorkers whose patience has rightly run out.”

But there's no momentum behind the legislative action that Stefanik and Daines have proposed. Stefanik's bill has five co-sponsors, all of them Republicans. Daines' bill has no co-sponsors.

Neither Stefanik's office nor Daines' answered queries about why lawmakers are not lining up behind their proposals.

U.S. side of Canadian border to remain largely closed through Sept. 21

The ban on nonessential travel by land from Canada and Mexico had been scheduled to expire Saturday.

Edward Alden, senior fellow at the Council on Foreign Relations, said it's worth noting that the political leadership of both parties seem to think it's advantageous to keep America's tough border travel restrictions that limit not only Canadians, but also Mexicans and Europeans, from easily visiting the U.S.

Democrats are in the midst of passing $3.5 trillion "human infrastructure" legislation, and most likely don't want to do anything that could conceivably interfere with that plan – including raising a thorny border issue that also involves the southern border, said Alden, also a visiting professor of U.S.-Canada economic relations at Western Washington University in Bellingham, Wash.

Meanwhile, legislation pushing a border reopening doesn't square with the Republican message that the Biden administration has been lax in allowing undocumented immigrants to cross the southern border.

"You've got bipartisan support in the border states for reopening, but no engagement at the senior level of either party," Alden said. "And, you know, I think the members know this, which is why they're not pushing these bills very hard. They know they're not going to get anywhere."

Schumer has one other reason not to push Daines' border bill to the Senate floor. If he did so, Senate rules would allow Republicans to propose amendments suggesting get-tough measures at the southern border, thereby gumming up the legislative works while creating a fresh set of GOP sound bites and talking points.

"This is either going to be an effective, efficient logistical operation, or it's going to be a disaster. And right now it's heading for disaster," Rep. Brian Higgins said.

One proposed border-related bill has gained modestly more momentum than the Stefanik-Daines measure. A proposal by Rep. Chris Jacobs, an Orchard Park Republican, would force the Department of Homeland Security, Department of State, and the Centers for Disease Control and Prevention to produce a report within 30 days of enactment detailing why the border remains closed to nonessential travel by Canadians.

“Even with Canada opening its border to fully vaccinated Americans, the Biden administration has completely refused to provide any answers on its efforts to reopen our side of the U.S.-Canada border," Jacobs said. "That’s why my focus has been on the need for answers, and the administration’s failure to develop a reciprocal, metric-based plan to open the shared border and share the specifics of that plan with the American people.”

Jacobs' measure has 14 co-sponsors, including Rep. Brian Higgins, a Buffalo Democrat who has been by far the loudest congressional voice demanding a full border reopening.

Higgins described the Stefanik/Daines efforts as "messaging bills" that stand no chance of passage because Congress has long left detailed border management issues to the presidential administration.

And he said he understood why protesters would target Schumer's office, even though the Senate leader has been loudly pushing for a border reopening. After all, Sept. 21 will mark 18 months since the border was closed to nonessential travel in a bid to prevent the spread of Covid-19.

So you want to go to Canada? Here's what you need to know

Canadian officials have set forth a complicated set of requirements that visitors must comply with, lest they want to have to make a U-turn on the Peace Bridge.

"They're making their voices heard. They are voices of frustration, and the frustration is justifiable and shared by many, including me," Higgins said. "They're trying to find pressure points on which to communicate their message, which I applaud."

Deborah Williams of Colden, another of the protest organizers, said she expected about a dozen protesters at Schumer's office, but Picone said it could be as many as 50. Both women are members of a group called Families Are Essential, which consists of people who have loved ones on the other side of the border.

Williams said members of the group still hold out hope that Schumer can somehow force a solution.

"We have the majority leader of the Senate," she said. "It is certainly one of the most powerful positions in Washington. And yet he has pretty much produced nothing" on the border.

Huge backups at border due to Canadian customs work slowdown

Truck backups spilled over from the border bridges to the I-190 and beyond in both Buffalo and Lewiston Friday as the Canadian customs unions began a work slowdown to protest long-stalled contract negotiations.

Senate Majority Leader Charles E. Schumer proposed a four-point plan for reopening the U.S.-Canada border at the Rainbow Bridge in Niagara Falls in May.