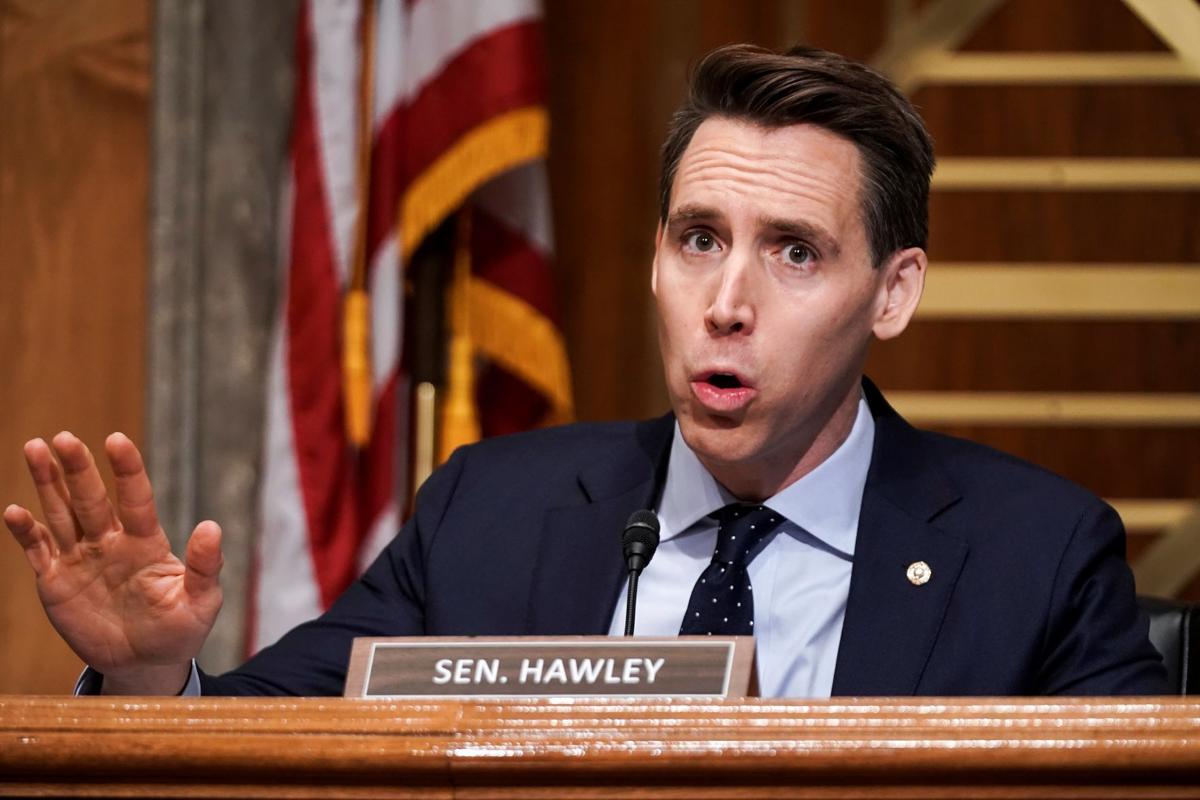 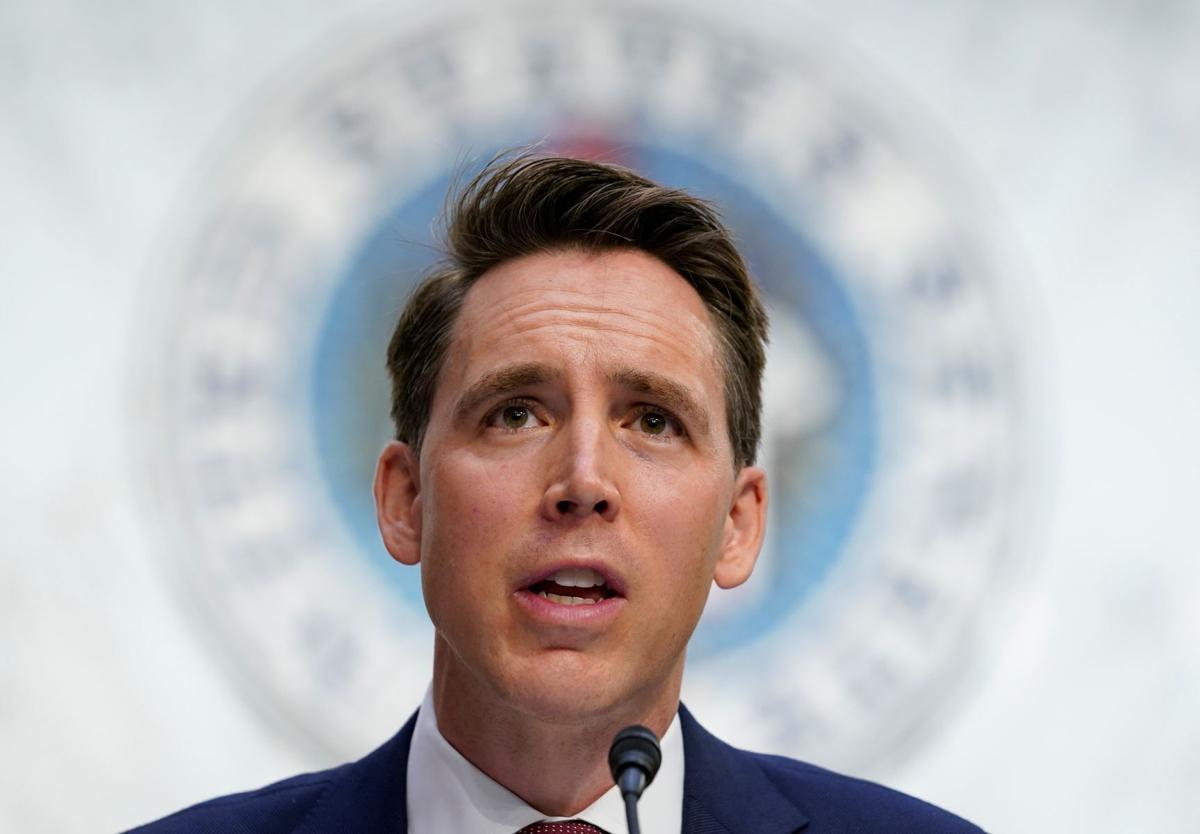 In this Oct. 12, 2020, file photo Sen. Josh Hawley, R-Mo., speaks during a confirmation hearing for Supreme Court nominee Amy Coney Barrett before the Senate Judiciary Committee on Capitol Hill in Washington. Hawley, says he will raise objections next week when the Congress meets to affirm President-elect Joe Biden’s victory in the election, forcing House and Senate votes that are likely to delay — but in no way alter — the final certification of Biden's win. (AP Photo/Susan Walsh, Pool, File)

WASHINGTON — Sen. Josh Hawley, R-Missouri, said Wednesday he will raise objections next week when Congress meets to affirm President-elect Joe Biden’s victory in the election, forcing House and Senate votes that are likely to delay — but in no way alter — the final certification of Biden’s win.

President Donald Trump has, without evidence, claimed there was widespread fraud in the election. He has pushed Republican senators to pursue his unfounded charges even though the Electoral College this month cemented Biden’s 306-232 victory and multiple legal efforts to challenge the results have failed.

A group of Republicans in the Democratic-majority House have already said they will object on Trump’s behalf during the Jan. 6 count of electoral votes, and they had needed just a single senator to go along with them to force votes in both chambers.

Without giving specifics or evidence, Hawley said he would object because “some states, including notably Pennsylvania” did not follow their own election laws. Lawsuits challenging Biden’s victory in Pennsylvania have been unsuccessful.

“At the very least, Congress should investigate allegations of voter fraud and adopt measures to secure the integrity of our elections,” Hawley said in a statement. He also criticized the way Facebook and Twitter handled content related to the election, characterizing it as an effort to help Biden.

Biden transition spokeswoman Jen Psaki dismissed Hawley’s move as “antics” that will have no bearing on Biden being sworn in on Jan. 20.

“The American people spoke resoundingly in this election and 81 million people have voted for Joe Biden and Kamala Harris,” Psaki said in a call with reporters. She added: “Congress will certify the results of the election as they do every four years.”

When Congress convenes to certify the Electoral College results, any lawmaker can object to a state’s votes on any grounds. But the objection is not taken up unless it is in writing and signed by both a member of the House and a member of the Senate.

When there is such a request, then the joint session suspends and the House and Senate go into separate sessions to consider it. For the objection to be sustained, both chambers must agree to it by a simple majority vote. If they disagree, the original electoral votes are counted.

The last time such an objection was considered was 2005, when Rep. Stephanie Tubbs Jones of Ohio and Sen. Barbara Boxer of California, both Democrats, objected to Ohio’s electoral votes by claiming there were voting irregularities. Both chambers debated the objection and rejected it. It was only the second time such a vote had occurred.

As president of the Senate, Vice President Mike Pence will preside over the Jan. 6 session and declare the winner.

Asked about Hawley’s announcement, House Speaker Nancy Pelosi, D-Calif., said, “I have no doubt that on next Wednesday, a week from today, that Joe Biden will be confirmed by the acceptance of the vote of the electoral college as the 46th president of the United States.”

Hawley is a first-term senator and potential contender in the 2024 presidential primary, and his decision to join the House objectors is a rebuff to Senate Majority Leader Mitch McConnell, who had asked his caucus not to participate in a futile quest to overturn the results.

Aware that the Democratic-led House would not support such a challenge and that it would put most of his fellow GOP senators in a bind, McConnell told them on a private call Dec. 15 that it would be a “terrible vote” to have to take. That’s according to two people who were not authorized to publicly discuss the private call and spoke on condition of anonymity.

While some Republicans have echoed Trump’s unsubstantiated claims, or at least refused to counter them, McConnell and an increasing number of GOP senators have acknowledged that Biden won and will be inaugurated Jan. 20.

The Senate’s No. 2 Republican, South Dakota Sen. John Thune, said earlier this month that if the Senate were forced to vote on a challenge “it would go down like a shot dog.” Thune said it didn’t make sense to put senators through a vote when “you know what the ultimate outcome is gonna be.”

A range of nonpartisan election officials and Republicans have confirmed there was no fraud in the November contest that would change the results of the election. That includes former Attorney General William Barr, who said he saw no reason to appoint a special counsel to look into the president’s claims about the 2020 election. He then resigned from his post last week.

Trump and his allies have filed roughly 50 lawsuits challenging election results, and nearly all have been dismissed or dropped. He’s also lost twice at the Supreme Court.

The group of House Republicans have said they plan to challenge the election results from Michigan, Wisconsin, Pennsylvania, Georgia and Nevada. All are states that Biden carried.

Alabama Rep. Mo Brooks, one of the Republicans who is leading the efforts, has raised questions about the way state elections were conducted. Some of the states made changes to ballots and procedures during the pandemic. While the new procedures may have led to confusion in some places, state and federal officials have said there was no credible evidence of widespread fraud.

In addition to having to go on the record with a vote, Republicans are worried about negative effects on the two Senate runoff elections in Georgia on Tuesday. GOP Sens. David Perdue and Kelly Loeffler face Democratic challengers Jon Ossoff and Raphael Warnock in a state that flipped in November for Biden.

“Following both the 2004 and 2016 elections, Democrats in Congress objected during the certification of electoral votes in order to raise concerns about election integrity. They were praised by Democratic leadership and the media when they did. And they were entitled to do so. But now those of us concerned about the integrity of this election are entitled to do the same.

“I cannot vote to certify the electoral college results on Jan. 6 without raising the fact that some states, particularly Pennsylvania, failed to follow their own state election laws. And I cannot vote to certify without pointing out the unprecedented effort of mega corporations, including Facebook and Twitter, to interfere in this election, in support of Joe Biden. At the very least, Congress should investigate allegations of voter fraud and adopt measures to secure the integrity of our elections. But Congress has so far failed to act.

“For these reasons, I will follow the same practice Democrat members of Congress have in years past and object during the certification process on Jan. 6 to raise these critical issues.”

Sen. Josh Hawley on defense in Missouri and elsewhere as election challenge fails

One political science professor said Hawley’s political opponents will forever link him to the insurrection on Wednesday.

In this Oct. 12, 2020, file photo Sen. Josh Hawley, R-Mo., speaks during a confirmation hearing for Supreme Court nominee Amy Coney Barrett before the Senate Judiciary Committee on Capitol Hill in Washington. Hawley, says he will raise objections next week when the Congress meets to affirm President-elect Joe Biden’s victory in the election, forcing House and Senate votes that are likely to delay — but in no way alter — the final certification of Biden's win. (AP Photo/Susan Walsh, Pool, File)