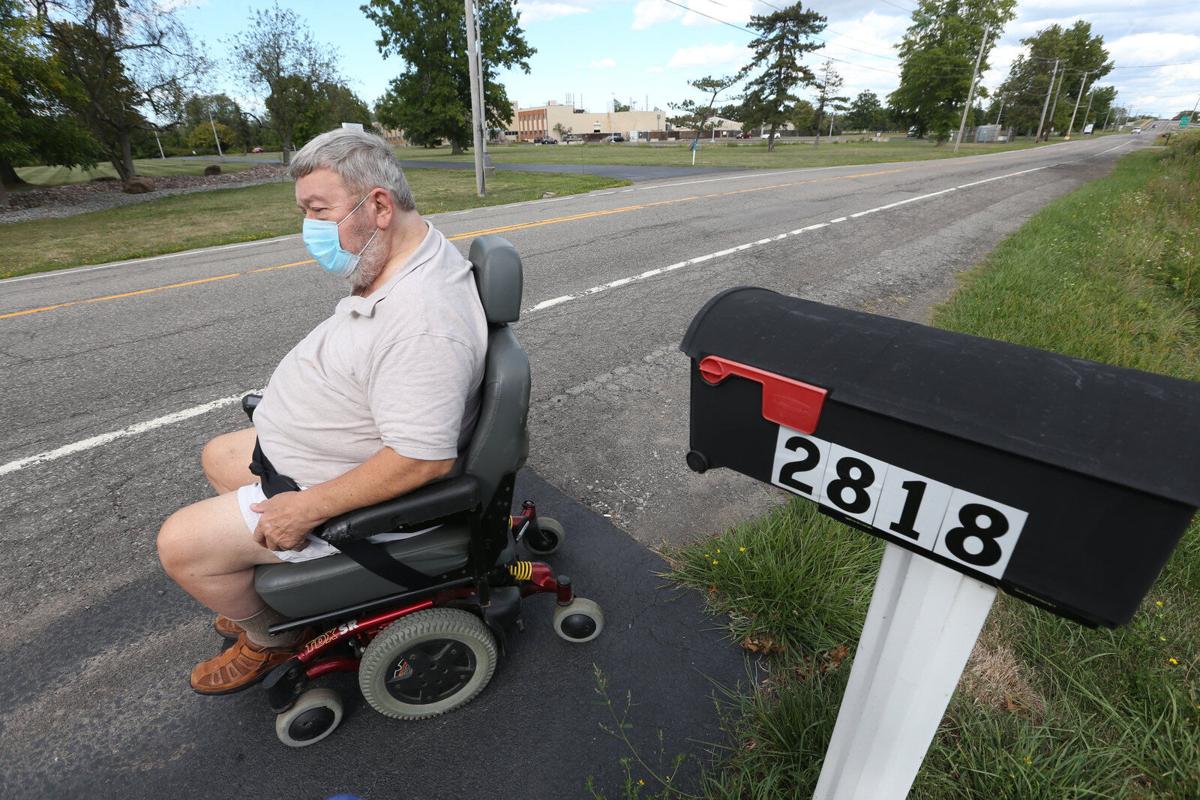 David Stalica of Grand Island is a Vietnam vet who complained to Sen. Charles Schumer because his diabetes medications were late in arriving last month.

Neither snow nor rain nor heat nor gloom of night ever used to get in the way of David Stalica's diabetes medication, which would always arrive by mail at the 76-year-old Vietnam veteran's Grand Island home well ahead of time.

All that changed last month, though.

"There was a time last month when our mail was almost non-existent," Stalica said.

Stalica was so worried about the delayed delivery that he and his wife reached out to Senate Minority Leader Charles E. Schumer and Rep. Brian Higgins.

The Stalicas are by no means alone. Last month, more than 2,850 people contacted Higgins' congressional office with concerns about the U.S. Postal Service. Many reported complaints ranging from delayed packages to late charges on bills where the check got mysteriously stuck in the mail. Other local congressional offices also said they have received numerous complaints.

A U.S. Postal Service spokesman in Buffalo failed to respond to an inquiry about the problems. But union officials at the agency's William Street Postal Distribution Center said the agency has fallen weeks behind in delivering some packages even if they are Priority Mail, which is supposed to arrive within two days.

Meanwhile in Washington, debate rages about President Trump's new postmaster general, Louis DeJoy, who has implemented cost-saving measures that some see as slowing deliveries – just as the nation embarks on its first-ever presidential election to be widely conducted through the mail.

Americans rely on the Postal Service to receive medications, to pay bills, to do business and to send gifts, among other things.

But some Buffalo-area residents wonder if they can rely on the Postal Service anymore.

James Kelly of the Town of Tonawanda has long gotten his prescription blood-thinner through the mail from Wegmans. There was never a problem until this summer, when the package he was waiting for just wouldn't come. Kelly, 71, said he was so worried about running short that he called Wegmans, prompting the company to immediately re-send the prescription via Federal Express.

"And then, lo and behold, about three weeks later, the original prescription finally came in the mail," he said.

Joan Dugan of Niagara Falls, who is also 71, said she always pays her Visa bill via the mail way ahead of time – so she was shocked to see a $39 late fee and $11 interest charge on her credit card statement this summer.

She called her credit card company to complain, saying: "All you have to do is take a glance at my payment history and you can see that this is the result of the nonsense going on with the post office." She said the company agreed to rescind the late fee and the interest payment, but this wasn't the only trouble she has run into with the post office.

"I have been waiting for some packages for a very, very long time," she said. "And it's like weeks on end."

EBay has been encountering the very same problem, which is why the online bartering hall recently sent a message to merchants like Brian McKenna of North Tonawanda.

"USPS is experiencing significant delays across their delivery network," the message said. "Please consider using other carrier options that may provide a better buyer experience."

That's advice that McKenna is willing to follow. "if I get one or two packages late, it's going to force me to change," he said.

Meanwhile, Mark Iacono of Buffalo has been waiting for the Postal Service to deliver a gift he mailed to his ex-girlfriend's 6-year-old son in London, Ont. He mailed it on Aug. 13, and it still hasn't been delivered.

The Postal Service did not respond to questions about the delays, but longtime postal union officials in Buffalo said they see packages piling up in bins at their William Street facility.

While the removal of letter-sorting equipment at the processing center caused controversy last month, most of the current delays involve parcels, said Frank Resetarits, president of the American Postal Workers Union Local 37. He walked through the William Street plant last week, and the bin with the oldest mail in it was dated Aug. 17.

"There was a mixture in it: Amazon packages, FedEx mail, parcel post – which would be ours – and Priority Mail," Resetarits said. "There were packages from Kohl's, J.C. Penney, and pet supplies from Chewy. They're all mixed together in these large shipping containers."

Patrick Bolognese, a distribution clerk at William Street and a union shop steward, has seen the same sort of thing.

"We've got Priority Mail that's 11 days delayed," Bolognese said. "There are times in the past when we've gotten behind, but you catch up in a day or two. You don't get a week, two weeks behind. Never in my 25 years has it ever been this bad."

One key reason for the backups, in Buffalo and beyond, is the Covid-19 pandemic, which has led to a boom in online shopping. As a result, the volume of packages handled by the Postal Service surged 49.9% in the quarter ending June 30, compared with the same period a year earlier.

That volume surge has continued in recent months. But postal employees said DeJoy, the new postmaster general, has imposed strict overtime limits that have left the Postal Service without the personnel on the floor needed to sort all those parcels. DeJoy has also ordered delivery trucks to leave even if postal workers aren't done sorting the mail.

"It's just the cumulative effect of the overall plan in general and all the different areas where he wanted to make changes," Resetarits said. "It's just all that coming home to roost."

"It bothers us, because we know somebody's medicine is probably in there," he said. "There's probably some kid's gift from grandma or grandpa, and we don't want to see it delayed."

The mail delays piled up not only as Trump's postmaster general implemented his controversial changes, but also as Trump ramped up his attack on mail-in voting.

Amid the pandemic, more Americans are expected to vote by mail than ever – and Trump, without evidence, has repeatedly said voting by mail is rife with fraud. And while the Postal Service Board of Governors has asked for an additional $25 billion to cope with the pandemic-related mail surge, Trump has opposed that move, telling Fox Business News last month: "Now they need that money in order to make the post office work so it can take all of these millions and millions of ballots ... But if they don’t get those two items that means you can’t have universal mail-in voting."

Democrats, meanwhile, are insisting that additional Postal Service funding be included in the wave of legislation Congress is expected to deal with in late September, including a possible Covid relief package and a must-pass spending bill. They are encouraged that when the House voted to pass a bill funding the Postal Service and reversing DeJoy's changes last month, 26 Republicans – including Rep. Tom Reed of Corning – sided with them.

"We are obviously still hearing concerns about the operations of the post office when it comes to the mail and medication, and that means that this issue still needs to be addressed," Reed said.

Even DeJoy acknowledged at a recent congressional hearing that the mail has been moving too slowly.

"We are very concerned with the deterioration in service and are working very diligently" to speed up mail delivery, he said.

"When you have the president of the United States directly involved in trying to destroy that institution because he can't win an election honestly or fairly, that should concern every American regardless of people's political persuasion," Higgins said.

Schumer, a New York Democrat, has been pressing for additional aid for the Postal Service since April. The senator, along with House Speaker Nancy Pelosi, met with DeJoy over the summer.

"He was sort of very high-handed and very dismissive and very interested in dismantling the post office," Schumer said in an interview Friday.

Nevertheless, Schumer said Republican lawmakers who represent rural areas are increasingly interested in reviving the agency, given that so many rural Americans depend on mail delivery.

"I think that the political situation is turning against those who want to hurt the post office, who want to get in the way of elections," Schumer said.

Jacobs, Reed side with Dems on Postal Service bill – but Jacobs accidentally votes no

The 257-150 vote on the Democrat-backed bill fell largely along partisan lines, but 26 Republicans sided with the Democrats.

As a result of the changes, "we've had entire towns that didn't get their mail that day," said Frank Resetarits, president of the American Postal Workers Union Local 374.

David Stalica of Grand Island is a Vietnam vet who complained to Sen. Charles Schumer because his diabetes medications were late in arriving last month.