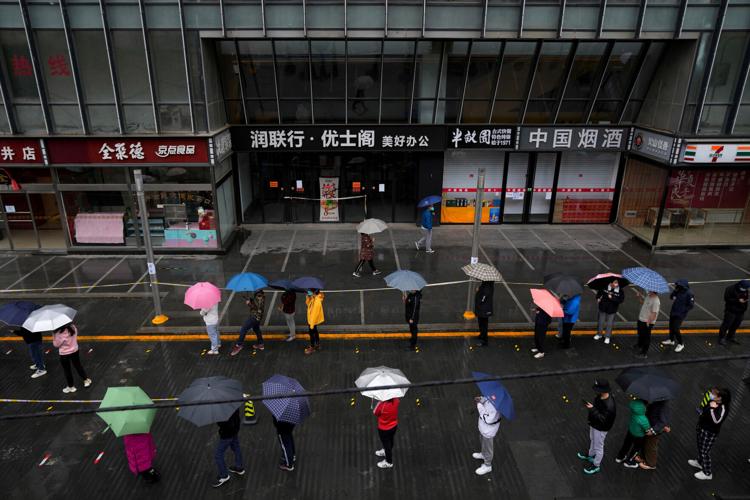 Locked-down residents line up in the rain for Covid tests in Beijing on April 27. 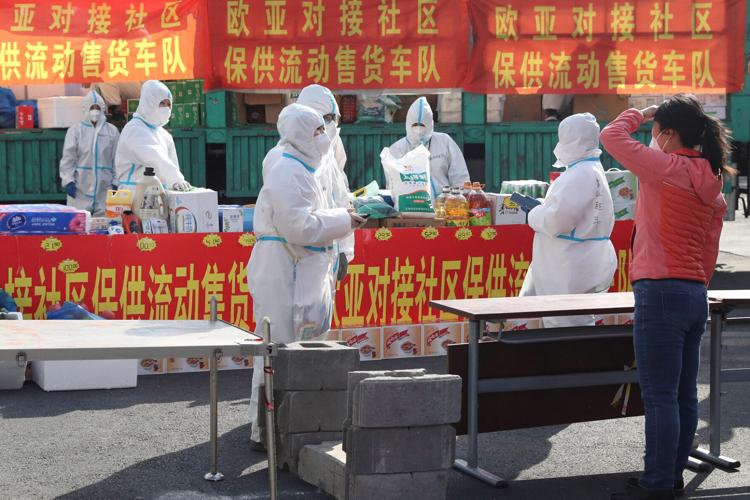 Health workers stand inside a residential compound in Changchun, China, on April 19. 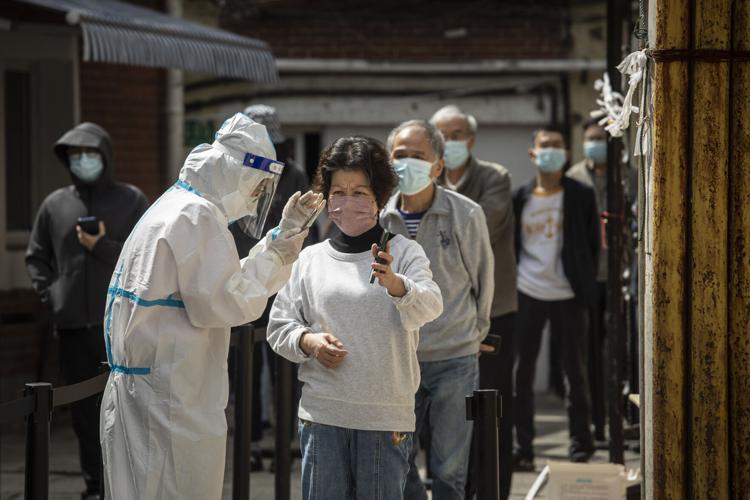 Residents line up for Covid-19 testing during a lockdown in Shanghai on April 27.

Support this work for $1 a month
By Jessie Yeung, CNN

China has introduced lockdown measures in its two biggest cities, Beijing and Shanghai -- the twin engines that power much of the nation's economy -- in an uncompromising bid to stamp out Covid-19 outbreaks.

Shanghai is at the center of the latest outbreak, reporting upwards of 10,000 new cases a day. Authorities have responded with a city-wide lockdown that has lasted weeks, confining nearly all 25 million residents of the once-bustling financial hub to their homes or neighborhoods.

Meanwhile, Beijing officials have launched mass testing exercises, shut schools and imposed targeted lockdowns on some residential buildings in a bid to rein in infections. Those actions have sparked fears of a wider lockdown similar to Shanghai's.

Throughout the pandemic, China has stuck to a strict zero-Covid strategy that uses lockdowns, mass testing, quarantines, and border closures to contain the virus. But the arrival of the highly infectious Omicron variant has thrown the sustainability of that strategy into question, with the virus spreading to different cities and provinces faster than the government can contain it.

Authorities are now enforcing full or partial lockdowns in at least 27 cities across the country, with these restrictions affecting up to 165 million people, according to CNN's calculations.

Here's what you need to know about the Covid situation in China.

Where are the lockdowns and restrictions?

Cases in China began rising in March, soon spiraling into the worst flare-up the country has seen since the initial outbreak in Wuhan in early 2020.

Northeastern Jilin province was hit hard during the early stages of the outbreak. Authorities put the provincial capital Changchun, an industrial hub, under strict city-wide lockdown on March 11, with nearby Jilin City following suit on March 21.

On Thursday, authorities in Changchun and Jilin City, which have a combined population of more than 13.5 million residents, said they would soon begin to gradually ease lockdowns -- though it remains unclear what that process will look like, or under what conditions people will be permitted to leave their homes.

Authorities also locked down several other cities, including the major economic center of Shenzhen, in March -- though some of these measures have since been lifted.

Shanghai, which has recorded more than half a million cases since March 1, introduced a staggered lockdown in late March. This had expanded into a full citywide lockdown by the end of the month.

Some neighborhoods can start to ease lockdown measures if they have reported no cases in the past two weeks, Shanghai authorities said on Wednesday -- but it's a tenuous freedom, with the threat of reimposed lockdown if even one local case is detected.

In Beijing, a mass testing campaign has covered nearly 20 million residents -- about 90% of the city's population. Another round of citywide testing is planned for April 27 to 30.

The capital closed schools in many of its most populous districts on Thursday. Several major hospitals also announced they were closing, and a growing number of entertainment venues including cinemas have also been ordered to close.

Much of the Shanghai lockdown has been characterized by chaos and dysfunction -- prompting alarm in other cities that fear they could be next.

Many residents have complained of food shortages, lack of medical access, poor conditions at makeshift quarantine camps and heavy-handed measures such as authorities separating infected children from their parents.

In March, an off-duty nurse in Shanghai died after being turned away from an emergency ward at her own hospital that was closed for disinfection. In early April, a health worker beat a pet corgi to death after its owner tested positive for Covid, the killing captured on camera. Last week, workers reportedly broke down the door of a 92-year-old woman's home in the early hours of the morning to force her into quarantine.

These stories and many more have gone viral on Chinese social media, sparking rare outcry online.

Similar stories have been reported from other parts of the country, too. In March, students at a locked-down university in Jilin City pleaded for help, saying they had been left to fend for themselves without basic supplies. Also in March, some Changchun residents reported struggling to receive medical care for non-Covid diseases such as cancer or kidney conditions, with hospitals turning away patients.

These incidents -- particularly in Shanghai, long seen as China's most modern and cosmopolitan city -- have put people elsewhere on high alert.

Though Beijing has yet to restrict people's movement outside the designated high-risk areas, many residents -- fearing a wider lockdown is on the cards -- began panic buying this week, forming long lines at supermarket checkouts and emptying shelves.

What has been the economic cost?

The lockdowns and restrictions have dealt a massive blow to activity -- particularly in economically important cities like Shanghai and Shenzhen.

Unemployment hit a 21-month high in March. Many businesses have been forced to suspend operations in several locations, including automakers Volkswagen and Tesla and iPhone assembler Pegatron. The Chinese currency, the yuan, weakened rapidly this week, plunging to the lowest level since November 2020.

There are signs Chinese leaders are nervous, too. In March, President Xi Jinping said China must "minimize the impact of the epidemic on economic and social development." On Tuesday, Xi called for an "all-out" infrastructure splurge to promote growth -- unusual for the Chinese leader, who rarely sets out detailed economic plans, typically leaving that to Premier Li Keqiang.

The Chinese government is "painfully aware of the damage to the economy," said Jörg Wuttke, president of the European Union Chamber of Commerce in China, earlier this month. He cited a private meeting with a Chinese ministry, but declined to name the agency.

Why is China sticking to zero-Covid?

Despite rising anger at the chaotic lockdowns, and a death toll that remained relatively low until this latest outbreak, authorities and state-run media have indicated China's zero-Covid policy isn't changing anytime soon.

Shanghai's severe situation "highlights the need to stick to the dynamic zero-Covid policy," said the nationalist tabloid, the Global Times, on Wednesday.

"If Shanghai, endowed with the country's best medical system, is in dire need of help facing rising numbers of severe cases, who will be there to offer help if other parts of China also have to battle the onslaught of the coronavirus?"

There are a few reasons why China is sticking so stubbornly to zero-Covid. Many Chinese leaders and scientists have voiced concern that easing restrictions could allow the virus to run rampant nationwide, potentially causing a spike in infections and deaths, and overwhelming the health care system -- especially given lagging vaccination rates among the elderly.

While China focused massive resources on developing and manufacturing home-grown vaccines, it fell short on ensuring those got into the arms of the elderly population. Now, as authorities have upheld expectations that death rates in the country will remain low, they have no choice but to rely on lockdowns to protect the vulnerable.

There's also a political element, with Xi placing his personal stamp firmly on the zero-Covid policy throughout the pandemic. The central government has frequently pointed to the low official death toll as evidence of the effectiveness of its strategy, and to burnish its claims of superiority over Western governments.

Xi has personally reiterated his support for zero-Covid throughout the pandemic, claiming last year that it showed China's commitment to saving "every human life" -- making the stakes especially high as the government now struggles to simultaneously contain the virus, sustain the flailing economy, and soothe public discontent.

And for Xi, it comes at a particularly sensitive time, months before his expected step into a nearly unprecedented third term in power this fall.

Moderna has asked the Food and Drug Administration Thursday to clear its low-dose COVID shots for babies, toddlers and preschoolers. Get more information on that, and more of today's COVID news, here.

Locked-down residents line up in the rain for Covid tests in Beijing on April 27.

Health workers stand inside a residential compound in Changchun, China, on April 19.

Residents line up for Covid-19 testing during a lockdown in Shanghai on April 27.