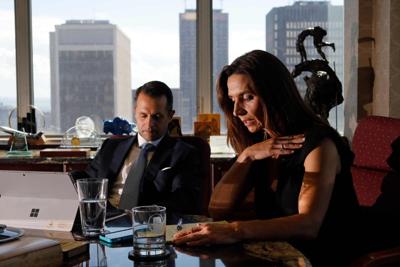 Matt Clark wasn't ready to get the Covid-19 shot.

But on Sept. 12, he read a story in The Buffalo News that revealed Buffalo business leader Mark Hamister had died, unvaccinated, from the virus. In the story, his twin children, Dan and Katie, urged the unvaccinated to change their minds for their families' sake.

Clark, who works for the family-owned Hamister Group, went out that same day to get his first dose at a Wegmans pharmacy.

"I kind of put my kids in Dan and Katie's spot and said, 'Do I want my kids to be having to visit me in a hospital, gowned up, the last time that they see their dad?' " Clark said. "As a child, or as a grown adult, that's got to be a hard thing to go through."

Clark is one of a number of people who told Dan and Katie Hamister that they, or someone they know, got a vaccine dose after learning of their father's vaccination status and his death from Covid-19. Katie Hamister has kept a spreadsheet listing the people who contacted her.

This response reinforces why the children were willing to share their private grief, and the details of their father's last days, with the public.

"This is something that I know helped our community in Buffalo. I know that," said Katie Hamister, a Raleigh, N.C., resident and executive director of the Hamister Family Foundation.

It is the kind of emotional appeal that can sway vaccine holdouts when health data and government advisories aren't successful.

By the time Mark Hamister accepted the vaccine, his children said, it couldn't aid him. But it's not too late for others who have spurned the vaccine.

"Seeing the pain in Dan and Katie Hamister's eyes and hearing the heartache in their voices had a significant influence on my decision to choose to get the vaccine," said Shawn Murray, who acted after a mutual friend shared the story online.

The founder, chairman and CEO of the Hamister Group, a major operator of hotels and assisted living residences, Mark Hamister was one of Buffalo Niagara's most influential business executives.

Mr. Hamister, founder, chairman and CEO of the Hamister Group, died Friday after a brief illness. He was 69.

Hamister alerted family members on Aug. 3 that he had tested positive for Covid-19. His health deteriorated quickly. Two days later, he went to Millard Fillmore Suburban Hospital's emergency room. One week after that, he was transferred to the hospital's intensive care unit.

He received oxygen therapy and convalescent plasma therapy, Dan Hamister said, but his condition didn't improve and he continued to struggle to breathe.

Family members were able to text Hamister and have fleeting phone calls, at least early on in his two-week hospital stay.

But at some point after he went into the ICU, Mark Hamister realized he wasn't going to leave, Dan and Katie Hamister said.

"I believe that the last week of his life, he knew he was going to die. With certainty, he knew it," said Dan Hamister, who has succeeded his father as CEO of the Hamister Group.

He died Aug. 20 at the age of 69. His age, his children say, was the only thing that made their father more vulnerable to the virus.

For a variety of reasons, Hamister never got the Covid-19 vaccine.

Dan and Katie Hamister decided to disclose their father's vaccine status, and the cause of his death, because they didn't want another family to endure what they've experienced with the loss of their father – a death they believe was entirely preventable.

"I thought the children of Mark Hamister coming forward was a wonderful act of charity," said Dr. Nancy H. Nielsen, a former American Medical Association president and senior administrator at the University at Buffalo's Jacobs School of Medicine and Biomedical Sciences who headed a regional committee on vaccination planning.

While many of the nearly 300 comments on The News' site commended the twins for sharing their deeply personal story, some came from die-hard anti-vaxxers unswayed by their message.

The Hamister twins said they were speaking to those fence-sitters who were persuadable.

"This is the right thing to do," said Dan Hamister, noting the need to vaccinate to protect children too young to get the shot themselves. "I think a lot of people are still too selfish."

Katie Hamister posted a link to the article on LinkedIn, and several people who responded said it made an impression on them. Her spreadsheet has at least 10 entries, though not all have gotten the shot, and these are just the people she's had contact with.

The list includes Clark, who works as general manager of the company's DoubleTree by Hilton in Jamestown.

Clark said he had held off on getting vaccinated against Covid-19 because he heard what he considered mixed messages about its safety and he had doubts about its long-term effects. Medical experts have said the Covid-19 vaccine is safe and effective.

The article, he said, gave him the nudge he needed to "sort of rip the Band-Aid off," with his sons – Declan, 5 years old, and Miles, who is 8 months – and his wife, Nicole Axtell-Clark, firmly in his mind.

His second dose is set for Sunday.

"I want to be there for them as long as I can," Clark said.

C.J. Marek also knew Mark Hamister, though not well. She works in the mortgage industry and met Hamister years ago when he was looking for a property in Ellicottville, she said. The twins, at the time, were children.

Marek, too, had put off getting the vaccine, in part because for much of the year it was approved only on an emergency basis. She works from home but does have to travel regularly for her job.

The U.S. Food and Drug Administration has since given its full approval to the Pfizer Covid-19 vaccine and this, coupled with the Hamisters' urgent plea, has convinced Marek, who was amazed how quickly Hamister succumbed to the virus.

She said she has a checkup scheduled next month and will make plans with her doctor to get the shot at that point.

"Just from that story – Katie sharing that story, and her brother – it did get me thinking," Marek said.

Murray also said he struggled with whether to get vaccinated, and even after getting his first shot, he remains "uneasy" about his decision.

"But as each day goes by I am becoming more confident in it," Murray said in an email.

He was motivated to act after seeing one of Katie Hamister's best friends, Charline O'Neil, share the article on Facebook. Murray and O'Neil teach at the same school and Murray said he knows his risk of exposure to Covid-19 is higher, despite the safety measures in place, because he interacts with so many students and staff on a daily basis.

Murray said the article resonated with him, especially because it made him think about his wife, Mandy, and their 18-month-old son, Brooks.

He texted O'Neil that the Hamisters' story had prompted him to get his first vaccine dose.

"I shared it with Katie right away," said O'Neil, who has known the family for years. " 'You're making a difference.' "

Their willingness to open themselves up like this, O'Neil said, "speaks to the character of who Dan and Katie are."

The Hamisters' loss has them reflecting on moments they shared with their father.

Katie Hamister, on the weekend before her father's diagnosis was known, went with him to visit the grave of his late wife, Sharon, Katie and Dan's stepmother, at Forest Lawn, where her father's name also was carved into the tombstone.

She had asked him if it felt strange to stand there looking at his final resting place and noticed he seemed tired and melancholy.

"He was sick, but he didn't know it," Katie Hamister said. Within 48 hours, her father had tested positive.

She has photos of her father at the hospital, lying in wake at the funeral home and as he was mourned at his gravesite. In one picture, her father is snapping his fingers as she looks through a window to his hospital room. He's in bed, hooked up to oxygen and relying on morphine to ease his suffering.

Katie Hamister pressed her hands to the glass and he gave her a thumbs-up before closing his eyes. She said it was the last time he reacted to her, one day before he died.

"It was right after I asked his nurse if there was any hope. She said she knew he wasn't going to make it when she walked in for that morning's shift," Katie Hamister recalled. "She cried and said, 'I'm so sorry. We did everything we could to save him.' "

Katie Hamister said she took the photos to show the toll the virus took on her father and how little direct human contact he had in his final days.

"By the end, you've seen how much his body fought the virus," she said. "He lost 30 pounds. He was skin and bones."

The twins and their children are heading to Florida, where Hamister lived most of the year, for a memorial service this month with his friends in that state. It replaces the 70th birthday celebration they'd been planning.

They've told invitees that everyone attending must be vaccinated.

Hamister did not say how much it paid to acquire the 88-room Staybridge Suites University of Rochester. 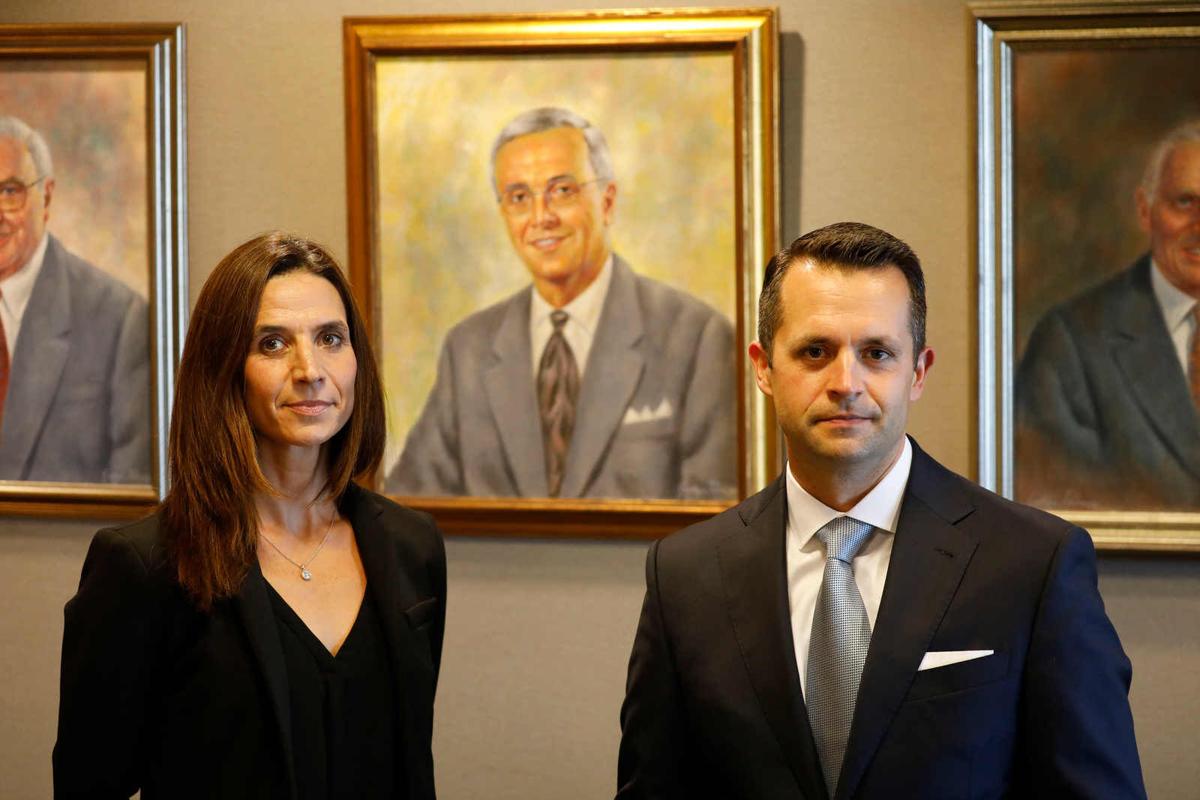 Dan and Katie Hamister, twin siblings, stand in front of a portrait of their late father, Mark Hamister, who died of Covid-19. He had refused to be vaccinated and his children shared his status in the hope it would persuade others to get their first vaccine doses. 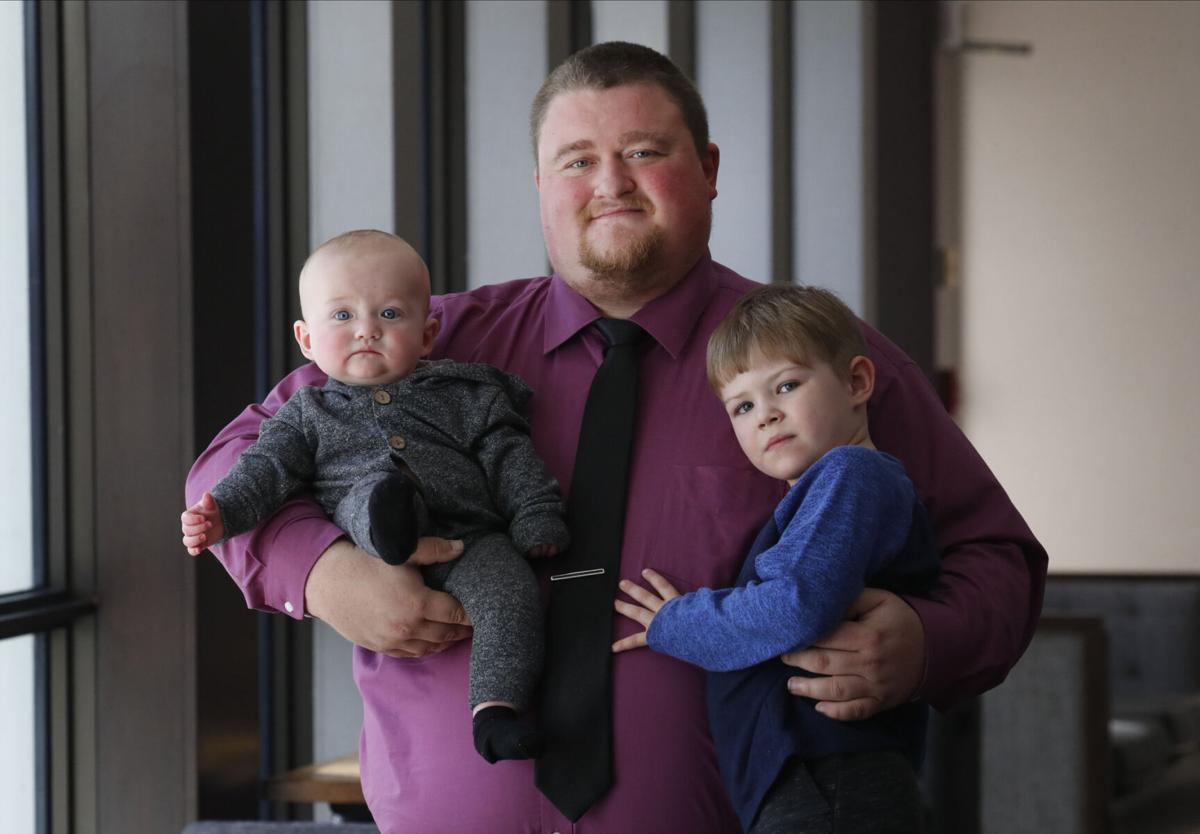 Matt Clark is the general manager of the Hamister Group's DoubleTree by Hilton hotel in Jamestown. He's seen here with sons Declan, 5, right, and Miles, 8 months. "I kind of put my kids in Dan and Katie's spot and said, 'Do I want my kids to be having to visit me in a hospital, gowned up, the last time that they see their dad?' " Clark said. 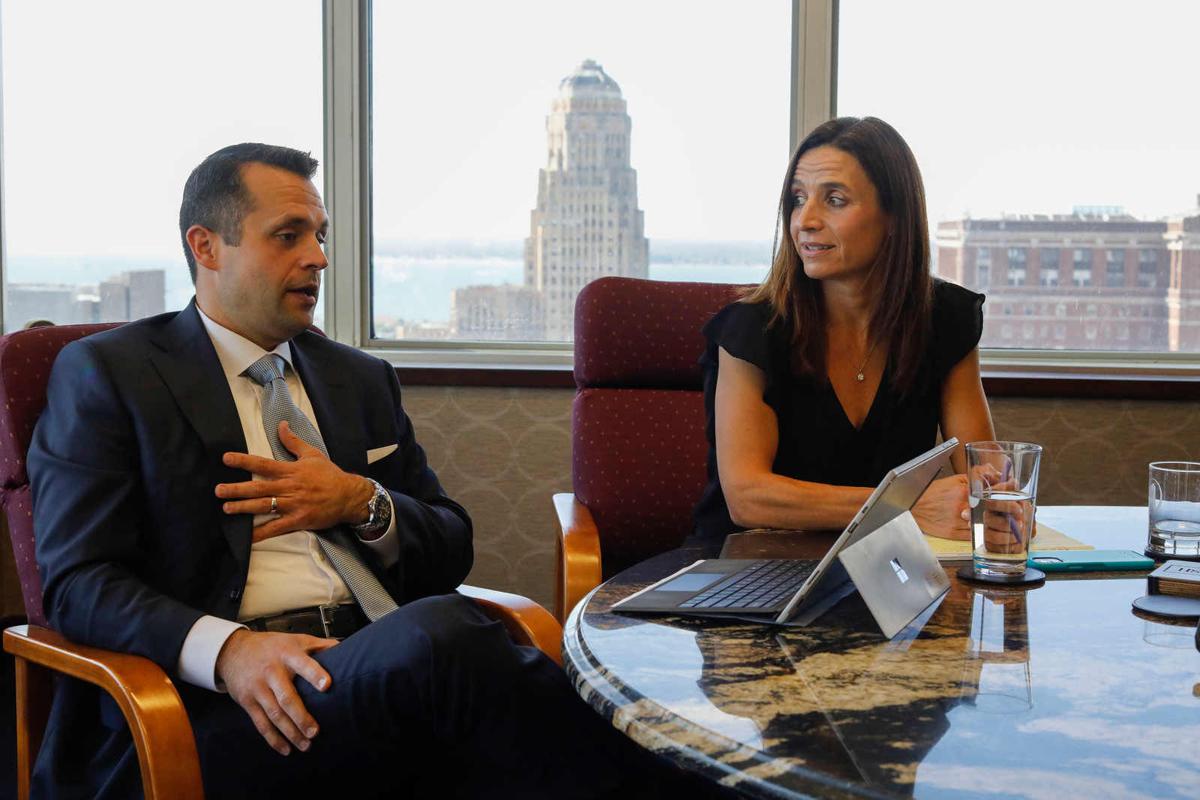 Dan and Katie Hamister, twin siblings, talk about their late father, Mark Hamister, who died in August after being hospitalized with Covid-19. 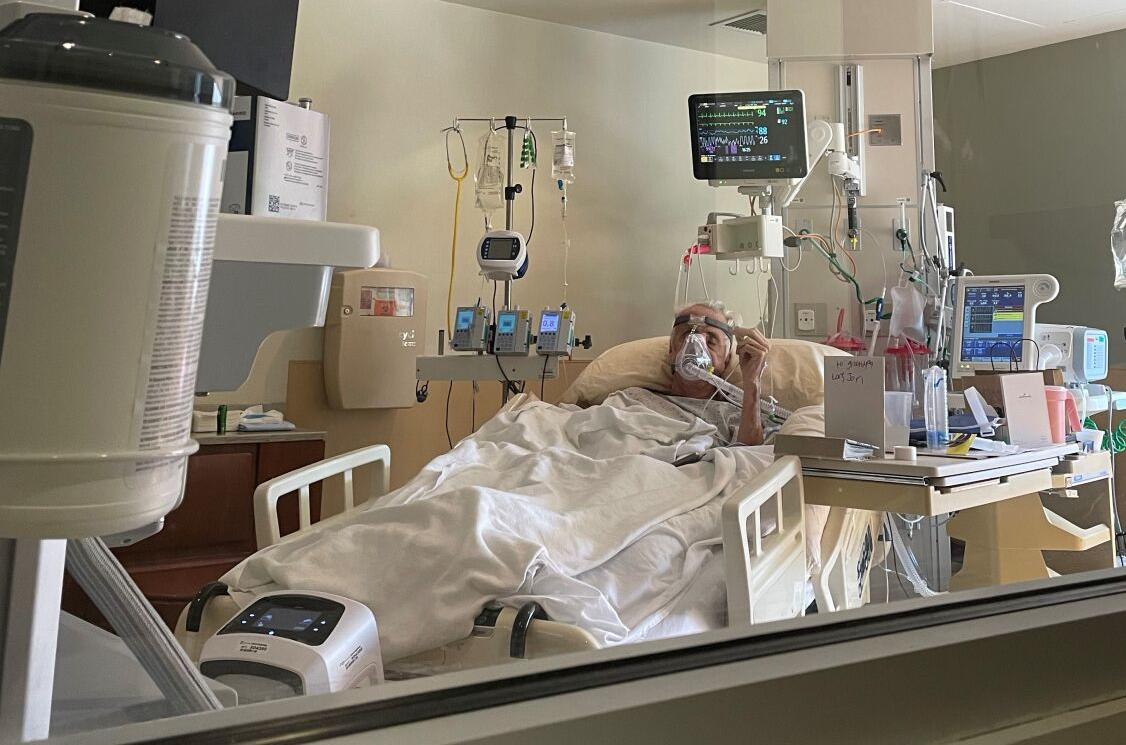 Katie Hamister took this photo of her father, Mark, at Millard Fillmore Suburban Hospital one day before his death, at 69, from Covid-19.