A Customs and Border Protection officer searches the trunk of a vehicle entering the United States at the Rainbow Bridge in Niagara Falls. (Derek Gee/Buffalo News) 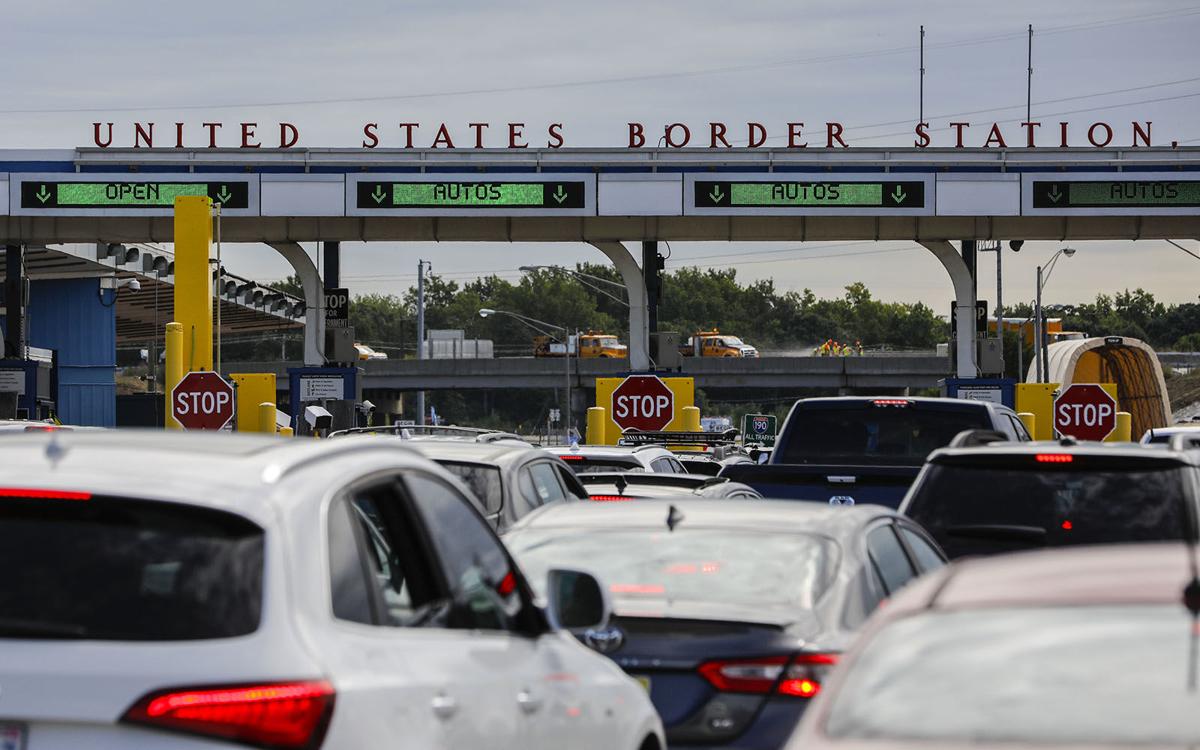 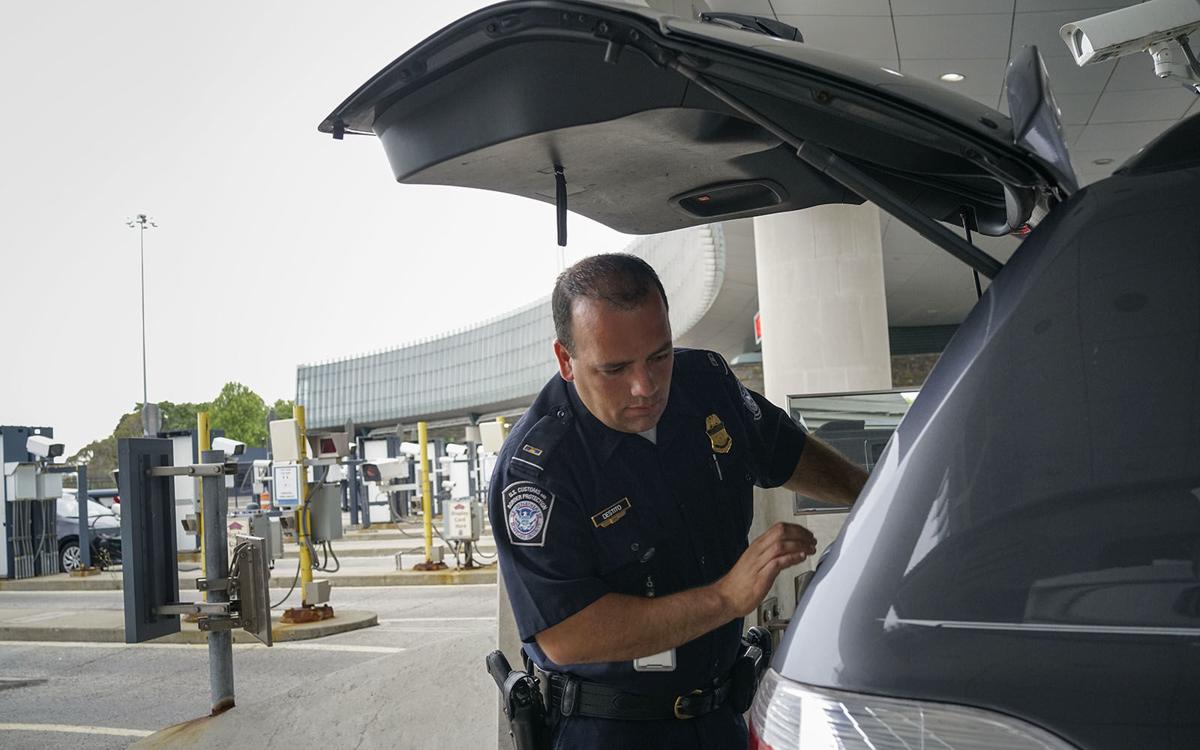 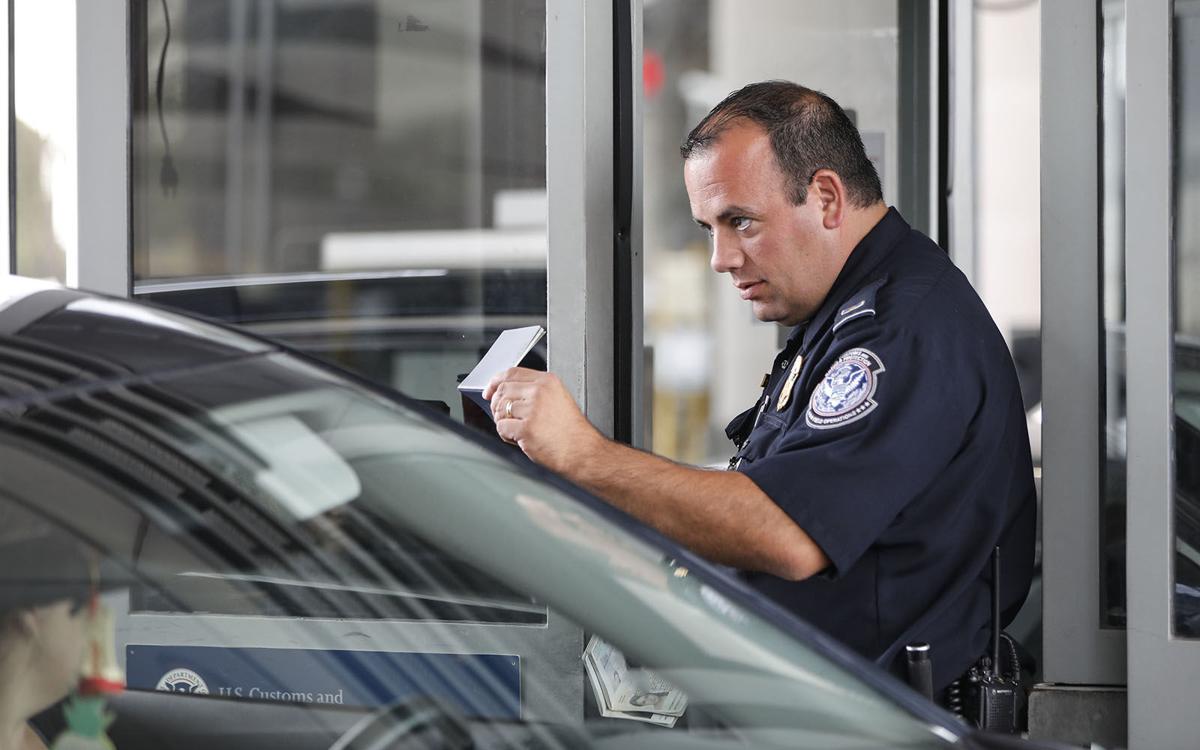 Customs and Border Protection Officer Destito conducts a primary inspection at the Rainbow Bridge in Niagara Falls, Thursday, Aug. 22, 2019. Officers generally have about 30 seconds to determine if a vehicle will be permitted to enter or require a secondary inspection. (Derek Gee/Buffalo News) 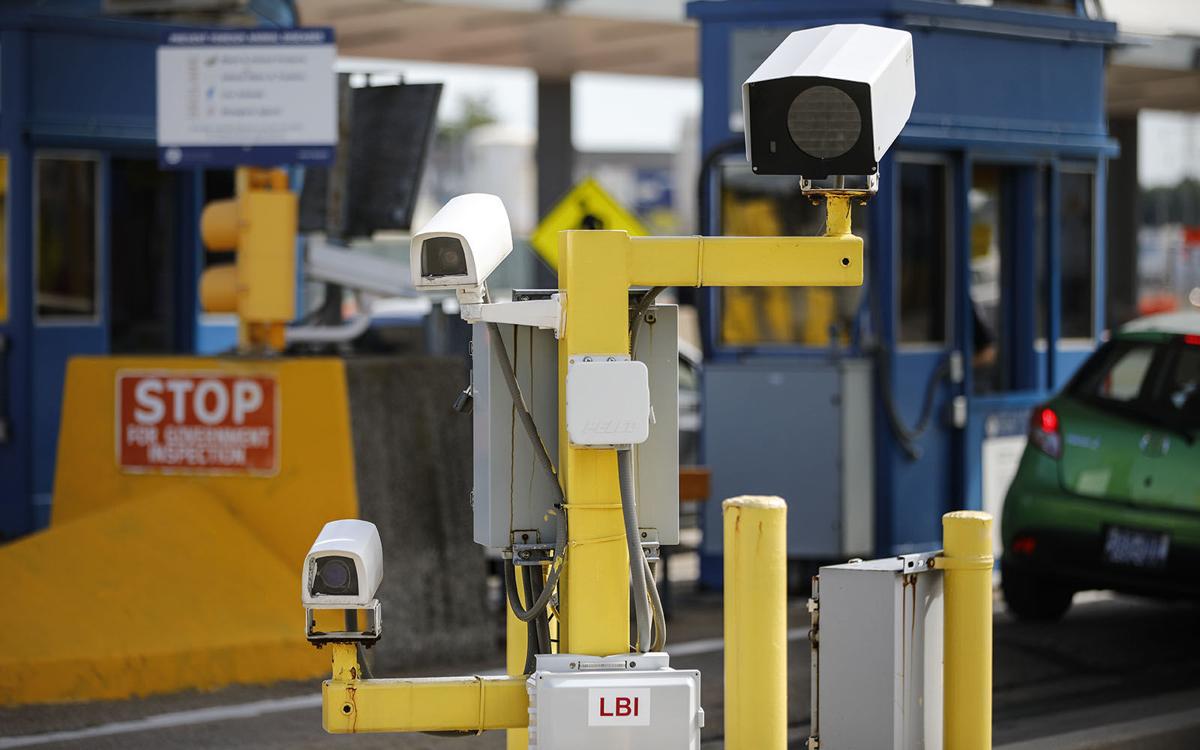 Cameras take photographs of the front of each vehicle and each front license plate as vehicles approach the customs interview area at the Lewiston-Queenston Bridge, Thursday, Aug. 22, 2019. (Derek Gee/Buffalo News)

Some things are predictable at border crossings. Traffic, for one, especially in summer, before and after hockey and football games, and on holiday weekends. Questions, for another. Customs officers will inquire about your citizenship, who’s with you, where you’re going and anything else they care to ask.

And there will be a decision: Either you can proceed into the country or you’ll be called inside a building – typically referred to as “secondary,” for secondary inspections. In there, you’ll answer some more questions. It may go fast and well, perhaps involving a touch of paperwork before you’re sent on your way.

But there’s a chance it may go longer, or poorly, or both. That’s why most of U.S. Customs and Border Protection’s secondary inspection buildings are equipped with rooms for lengthier interviews, and jail cells for the occasional border crosser who breaks the law or presents a threat.

“Ninety-nine percent, or so, of people coming across the border are law-abiding,” said Richard Roberts, assistant director for border security at CBP’s Buffalo Field Office, which covers the four passenger crossings in Western New York and well beyond. “We appreciate that, and that’s our job — to facilitate them efficiently, and to allow them entry into the country, between travel and trade. But at the same time, we have a lot of threats out there, a lot of risks, and we need to focus on finding that needle in the haystack.”

The information that follows is based on the technology and processes put in place by CBP, which handles entries into the United States, and was compiled through several interviews. There are many similarities on the Canadian side, which is handled by the Canada Border Services Agency. The CBSA also provided information for this story.

On a cruise ship or international flight, airlines provide a passenger manifest that allows CBP to begin its checking process before arrival. But at the inspections process at an open crossing area such as the bridges in Western New York, you’re showing up unannounced. Everything happens on the spot, and depends on the judgment of the officer in the booth.

Radiation scan: When you first pull up to an inspection bay, a yellow scanner detects any radiation in the vehicle, and differentiates between neutron radiation – which is used in weapons – and gamma radiation – which is used in medical iodine medical purposes, such as stress tests. If someone tests positive for radiation, the officer in the booth will be alerted, and the person will likely be scanned with a radiation isotope identifier. That secondary scan will confirm the radiation is coming from medical iodine, and the person will be cleared.

License-plate check: A license plate reader automatically runs the vehicle to make sure it hasn’t been flagged by law enforcement. The results are instantaneously fed to the officer in the booth. A camera also takes a photograph of the driver from the front of the vehicle, and the license plate from behind.

Chip reader: A device scans the vehicle for documents with a radio frequency identification chip. These are typically enhanced driver’s licenses, Nexus trusted-traveler cards and passport cards. Actual passports need to be swiped in the booth, and birth certificates for children 15 and under are processed manually, too. All of that chip-enabled information is displayed on the officer’s screen, which means they likely know your name, vehicle information and other details about you before you pull up to the booth.

By the time the vehicle has reached the inspection booth, the officer likely has all of this information on a screen: names and citizenship of passengers, and any red flags attached by law enforcement to a person or the vehicle.

A typical inspection takes 50 to 60 seconds and is, as officers put it, their “one chance” to get it right by proactively stopping potential bad actors. “You’re making that decision to release, and you don’t get to take it back,” CBP Chief Officer Aaron Bowker said. “Once you release them and they go, they’re gone. You don’t get a second try.”

Some questions are basic: “Citizenship?” – the standard first question – is asked so that you are verbally confirming what your identification says, and therefore can be held to it legally. Questions about where you were in Canada and how long you were there help build a background picture. Inquiries about what you’re bringing back help officers determine whether you need to pay a duty on something legal. Or, if you seem uncomfortable when that question is posed, an officer may wonder whether you’re trying to sneak in contraband – say, marijuana that was legally purchased in Ontario, but is illegal in New York.

The questions officers ask are designed to help them detect lies or cover-ups, and your body language – including the most subtle bits, called “microexpressions” – may matter as much as your words. Among the potential red flags that may lead to further questioning:

• Answering a question vaguely (“I have a meeting,” “I’m getting lunch with a friend”) and when asked for more specifics (“Where are you meeting?” or “How do you know this person?”), turning uncomfortable or seeming unwilling to provide details.

• One person answering for everyone in the car, when the other people have the language ability to answer for themselves.

• Wearing sunglasses, playing music, talking on the phone or anything else that – obvious as this likely seems – signals disrespect.

• Positioning yourself as a well-to-do businessperson, but driving a car – or wearing clothes, or shoes or accessories – that don’t fit the description. While there’s nothing illegal about, say, a corporate executive heading to a meeting in ripped sweats and a rusting vehicle, an officer may decide to ask a few more questions to verify the truth of it.

If an officer learns you have traveled to a conflict zone, or a country that is on the U.S. State Department's state-sponsored terrorism list, you're likely to be asked about it.

“Some inspections take longer based on what they’re seeing and what they’re hearing,” Bowker said. “Some are a lot faster. Morning traffic, you might have the same nurses going to work every single day over at the hospitals. These are fast inspections, versus someone that they haven’t seen.”

Once you cross into either country, CBP and the CBSA share that information with each other. The information shared is limited to name, date of birth, nationality/citizenship, gender, the details of the document you used to travel, and the time, date and place you crossed. This creates an entry-exit record that can be accessed by both countries.

Not all activity in secondary inspection is driven by suspicion. Much of it is simply routine paperwork: Passport stamping, visitor visas and the like. But if a vehicle has been flagged by officers – or randomly by CBP’s computer system – for a secondary check, then there likely will be more questions inside. The vehicle and its contents will be searched. Because privacy rights are narrower at the border, officers do have the ability to search your phone or other electronic devices if they suspect it is necessary.

CBP officers interviewed for this story made clear that they’re not searching for illicit personal moral acts – a relationship on the side, or a trip to a strip club – but rather to ensure that you are who you claim to be, and you’re doing (or did) what you claimed to do. They are also ensuring that you’re not bringing in contraband, child pornography, trying to sneak in large amounts of undocumented goods or money, or engaging in human trafficking, smuggling or any other illegal activities.

Most secondary interviews happen at a standing booth that resembles a teller counter at a bank. Longer or more sensitive conversations will likely happen in a private interview room, and other federal agencies – the FBI, Homeland Security Investigations – may be called in. CBP officers are armed law enforcement personnel with arrest capabilities, and if they do apprehend someone, that person may spend time in a jail cell inside secondary inspection before local or federal officers take him or her away.

The overwhelming majority of inspections have a ho-hum, have-a-good-day result. But catching a potential bad actor isn’t a negative, either. The worst outcome would be saying “have a good day” to a bad guy.

“It’s a lot of weight they carry on their shoulders,” Bowker said. “This is all one big picture. You have your systems, which give you a little bit of information. You have to tie that with what you’re seeing from the person and make a decision.”

A decision they don’t get back.

Six arrested by Border Patrol on Grand Island accused of being in U.S. illegally

The arrests happened after a foot pursuit "through wooded terrain," while a sixth subject was arrested after a three-hour search, officials said.

A Customs and Border Protection officer searches the trunk of a vehicle entering the United States at the Rainbow Bridge in Niagara Falls. (Derek Gee/Buffalo News)

Customs and Border Protection Officer Destito conducts a primary inspection at the Rainbow Bridge in Niagara Falls, Thursday, Aug. 22, 2019. Officers generally have about 30 seconds to determine if a vehicle will be permitted to enter or require a secondary inspection. (Derek Gee/Buffalo News)

Cameras take photographs of the front of each vehicle and each front license plate as vehicles approach the customs interview area at the Lewiston-Queenston Bridge, Thursday, Aug. 22, 2019. (Derek Gee/Buffalo News)