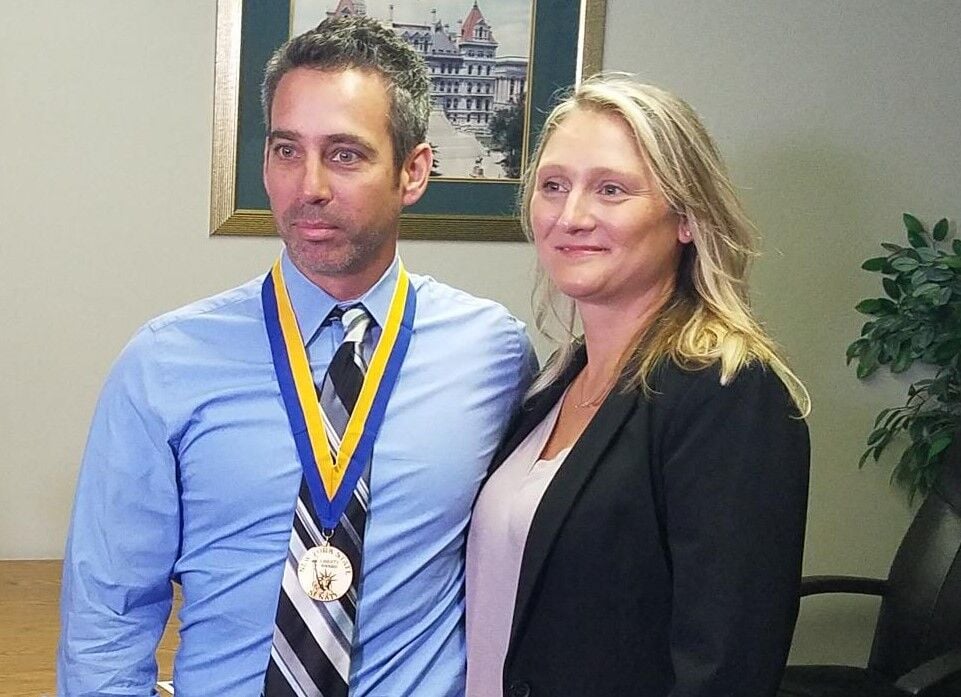 Ryan Suitor and his wife, Diana, pose Sept. 14, 2021, with his State Senate Liberty Medal, bestowed in the Lockport office of State Sen. Robert G. Ortt for rescuing a mother and her 2-year-old son, who had stopped breathing, on Interstate 190 in Lewiston on April 22, 2021. 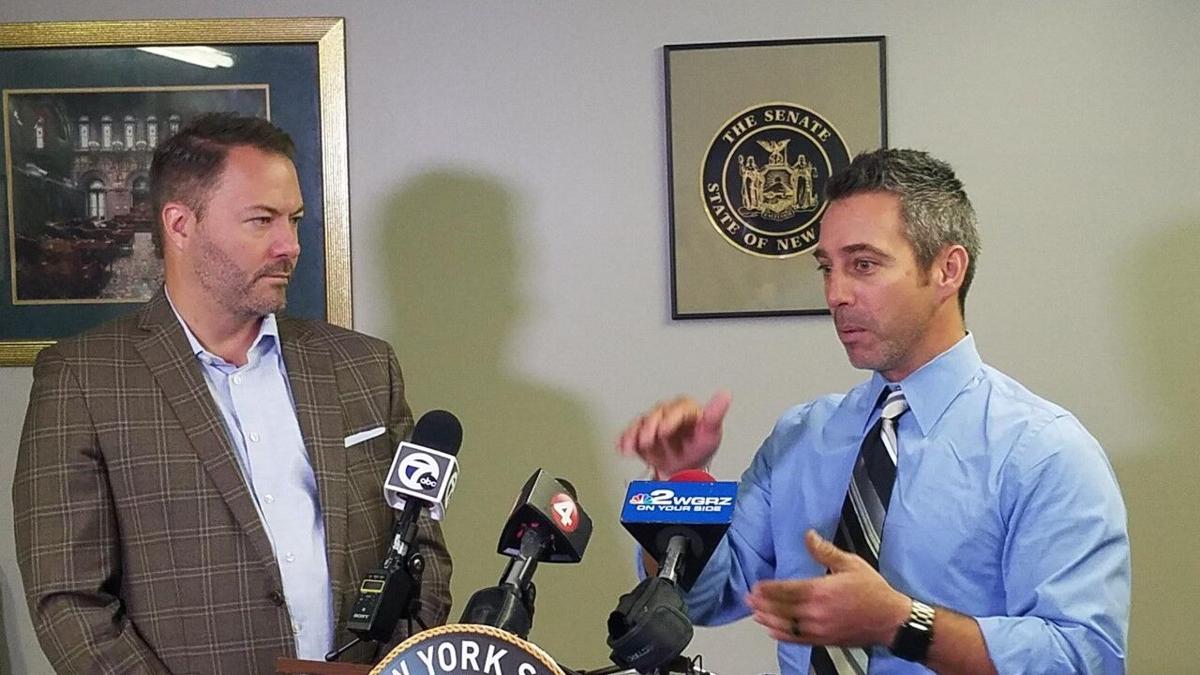 He had turned "about as blue as my shirt," said Ryan Suitor, who skidded to a stop on his way home from work April 22 to help the child and his panicked mother, Susan Rozanski.

At the time, Suitor, a counselor for children with autism at Orleans-Niagara Board of Cooperative Educational Services, was driving north on Interstate 190 toward his Youngstown home.

Rozanski had looked in the rearview mirror to check out her son and saw he had turned blue.

She stopped on the shoulder of the road and grabbed the boy from his car seat.

"She was running down the highway with him in her arms screaming, 'Help me, help me! My son's dying!' " Suitor recalled Tuesday. "I still hear those screams. It gives me chills."

Suitor, 42, didn't realize at the time that Rozanski was the wife of a former schoolmate of his.

He didn't know who the woman was. He just knew that she needed some help.

His decision to stop and help was honored Tuesday, as he accepted the State Senate's Liberty Medal from Sen. Robert G. Ortt at a news conference in Ortt's Lockport office.

"Ryan saw a woman who clearly needed help, clearly was in distress, and decided to pull over, which in and of itself makes him stand out," Ortt said. "I'm sure there were a lot of cars that went flying by her on that day at that moment, maybe the scariest moment of her life."

The situation wasn't ignored by everyone.

"I was actually on the other side of the highway and I drove over the median and pulled up right next to her," Suitor said. "Someone actually called 911 thinking it was a kidnapping."

Suitor said he realized that they were near Mount St. Mary's Hospital in Lewiston, which Rozanski, in her panic, hadn't noticed.

"I do have first-aid training, but with the state of the child when I got in the car, I knew if I tried to do CPR with the hospital right behind and tried to call 911, it would be quicker to just get the child to the hospital," Suitor said.

He drove back across the median and exited for the hospital at high speed, taking some air when he struck speed bumps, and brought them to the hospital's front door.

Nurses rushed to the scene and grabbed the child out of Rozanski's arms, rushing him to emergency treatment while Suitor begged Rozanski to stay and call her husband.

The problem turned out to be a rare virus that was successfully treated.

"I didn't want any recognition. It's all overwhelming," Suitor said.

Ortt said each senator is allotted some Liberty Medals. The recipients are not voted on by the Senate, but the awards must be approved by the Senate staff.

Ortt said he's had a few suggested recipients vetoed by the staffers, who tend to favor civilian heroism rather than job performance by uniformed personnel.

"An ordinary citizen of Western New York sprang into action and did something heroic. That's the definition of heroism to me: ordinary people doing extraordinary things," Ortt said.

Ryan Suitor and his wife, Diana, pose Sept. 14, 2021, with his State Senate Liberty Medal, bestowed in the Lockport office of State Sen. Robert G. Ortt for rescuing a mother and her 2-year-old son, who had stopped breathing, on Interstate 190 in Lewiston on April 22, 2021.