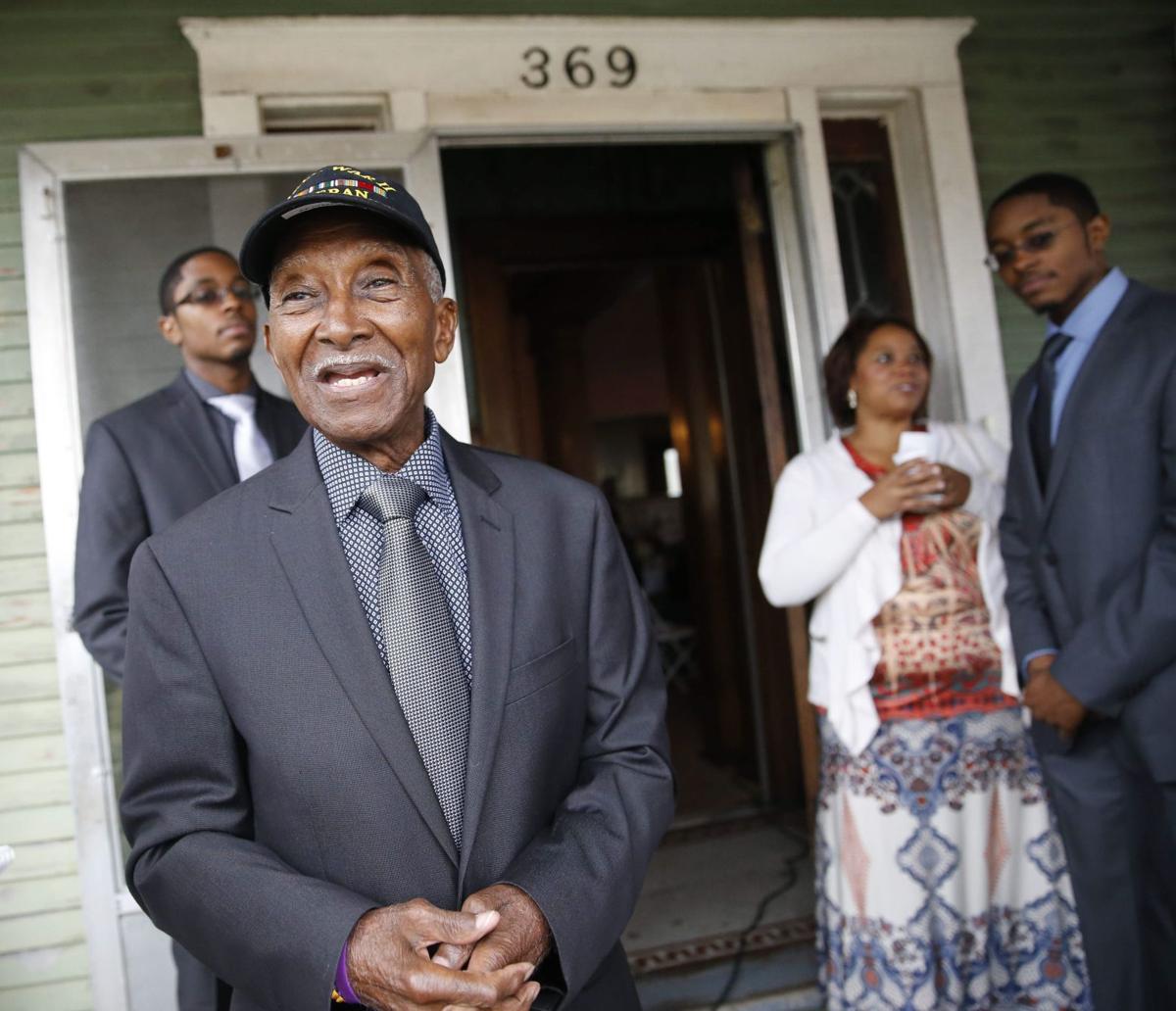 World War II veteran Johnnie Hodges Sr. returns to his Humboldt Parkway home amid a celebration on Friday, saying “there are no places that take the place of home.” An online fundraising campaign raised $110,000 for Hodges and his family. 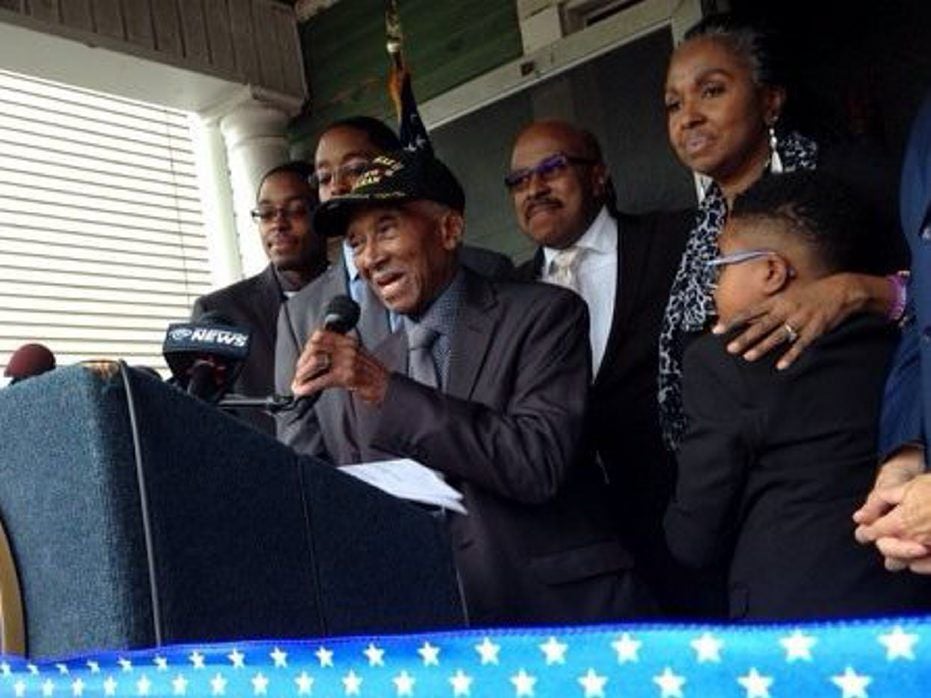 Johnnie Hodges speaks at a ceremony welcoming him back into his Humboldt Parkway home on Friday, Nov. 6, 2015. (Derek Gee/Buffalo News)

“I knew this time would come and it came today. The last words I’m going to say are, thank God,” the 90-year-old Hodges said, addressing the crowd before taking an oversized pair of scissors and cutting a red, white and blue ribbon with help from his 9-year-old grandson, Jonathan.

And while the soft-spoken Hodges kept his comments short, others had plenty to say. They marveled at the Navy veteran’s unshakable faith that he eventually would return to his home of more than half a century after being physically removed July 9 following a local bank foreclosure.

By Friday, people across the country had become familiar with Hodges’ story of falling behind in his mortgage payments while taking care of his wife, Flora, who died last year of Alzheimer’s disease. Expenses for her medicine and other costs associated with the disease had drained him financially, and his only income was Social Security.

His fortunes changed last month after an online Yahoo Real Estate News story, based on earlier stories in The Buffalo News, reached thousands of readers across the country and beyond.

Robin Hodges, his daughter, choked up at times as she recalled how the online GoFundMe drive skyrocketed to more than $100,000 in less than 24 hours after the story was published. The initial fundraising goal of $50,000 was achieved in just a few hours, making it certain that the family could buy back the house, which federal officials had appraised at $46,000.

The mortgage was federally guaranteed.

Robin Hodges recalled how a stranger, Greg Elwood, was so moved by Hodges’ plight that he set up the online fund drive and then called to tell her the fund was rapidly increasing.

“I was trying to drive and I couldn’t. I had to pull over and get out of the car and jump and scream. My little guy Jonathan was with me and he said, ‘Mommy, are you OK? You want a cup of hot cocoa?’ That happened on Oct. 19, my mom’s birthday, and I know she was by God’s throne saying, ‘Do this for my family.’ ”

Mayor Byron W. Brown pointed out that the Hodges family shut down the fundraising site when it hit $110,000.

“If they hadn’t, there probably would still be donations being made,” Brown said of the outpouring of generosity.

Rep. Brian Higgins, who interceded with U.S. Department of Housing and Urban Development, said Hodges’ story brought out the best in people.

“For the Navy veteran and his family, this house on beautiful Humboldt Parkway became their anchor, a steady place filled with family and love for the last 60 years,” Higgins said. “So on behalf of a grateful community and grateful nation, Mr. Johnnie Hodges, welcome home.”

The joy was amplified by the sight of Patriot Guard Riders standing at attention with American flags raised and by Assemblywoman Crystal D. Peoples-Stokes, who presented Hodges with a portrait of President Obama; and by State Sen. Timothy Kennedy’s declaration to Hodges “that we owe this to you and your family.”

And there was lots of prayer.

“When I woke up this morning and said my prayers, I asked God what should I say today,” said Johnnie H. Hodges Jr., who came from Atlanta to be part of the celebration. “God said, ‘Just say thank you. Say thank you even to the bogus donations.’ I said, ‘Why?’

The son was referring to a man from the Cleveland area who had for weeks promised to pay all of Hodges’ debts, buy back his home and fill it with new furniture.

Many others, though, fulfilled their promises.

“We had donations from Norway to the United Kingdom, from California to Florida, from Depew to West Falls. We even had kids with lemonade stands,” Robin Hodges said. “I even had a person contact me who said ‘I don’t have money to pay my light bill, but I will give this $5 to your father.’ ”

Turning to her father as she spoke from a podium on his front porch, she said, “I thought I had strong faith, but Daddy, I want to thank you for showing me true faith.”

She purchased the house back from HUD on Wednesday and plans to live in the second-floor apartment with her three sons. Donations also will be used to cover the cost of exterior and interior repairs and a fund will be set up to cover the veteran’s household expenses.

Her father, she explained, had kept his deteriorating financial situation to himself, not wanting to burden her because she is a single working mother. By living at her childhood home, she said, she will be able to keep an eye on her father.

HUD officials said it was a joy to be part of a story that had a happy ending, which is not always the case.

“It has been gratifying to partner with so many people committed to helping Mr. Hodges and his daughter purchase and return to their long-time home,” said Holly Leicht, HUD’s Regional Administrator for New York and New Jersey. “Today we at HUD can proudly say that we’ve fulfilled our mission to provide quality affordable housing for someone among the most deserving – a U.S. veteran – and his family.”

After the hour-long ceremony was completed and many had entered the house for a catered lunch, Hodges stood on the porch and reflected on what had happened.

“I had no idea there would be this many people. I figured there would be just a few,” Hodges said. “It feels really good to be back home. There are no places that take the place of home.”

"He loved being chief of police," his brother, David Sliwinski, said. "He loved his job. He loved helping people."

Americans seeking to cross the border into Canada also will be required to take a Covid-19 test before arrival.

Because of the power demands connected with the large number of supercomputers needed for elaborate calculations, cryptocurrency mining can be…

World War II veteran Johnnie Hodges Sr. returns to his Humboldt Parkway home amid a celebration on Friday, saying “there are no places that take the place of home.” An online fundraising campaign raised $110,000 for Hodges and his family.

Johnnie Hodges speaks at a ceremony welcoming him back into his Humboldt Parkway home on Friday, Nov. 6, 2015. (Derek Gee/Buffalo News)